Dozens of items from Sir Norman Hartnell’s archives are heading to the auction block, including designs for Princess Anne.

Several sketches, press pieces, and documents from the 1960s and 1970s are going to be auctioned by Ewbank’s Auctions on 11 November. The items were given as a personal gift from the house’s last owner to the vendor.

There are two different watercolour and pencil designs labelled “HRH Princess Anne.” The designs are quite different – one is a turquoise and white evening gown, while the other is a yellow A-line dress and coat. Ewbank’s estimates that these two sketches will sell for £150-250 on the 11th.

Hartnell was known as The First Knight of Fashion, and his designs were society favourites for decades. His drawings and designs are a testament to his lasting talent and eye for detail.

Ewbank’s Vintage Fashion specialist Susan Orringe says, “[t]he crispness of the images, light touch and flow of the designs, as well as the sense of movement and quality that they convey have an extraordinary immediacy about them.”

There are also some papers in the collection being auctioned that address a royal wedding scandal. The Daily Express had printed an article in the week before Princess Margaret’s wedding that Hartnell had taken out a £10,000 insurance policy in case of the wedding’s cancellation. Hartnell denied these claims, but it was not a good omen – the couple would famously divorce in 1978 after feuding for years. 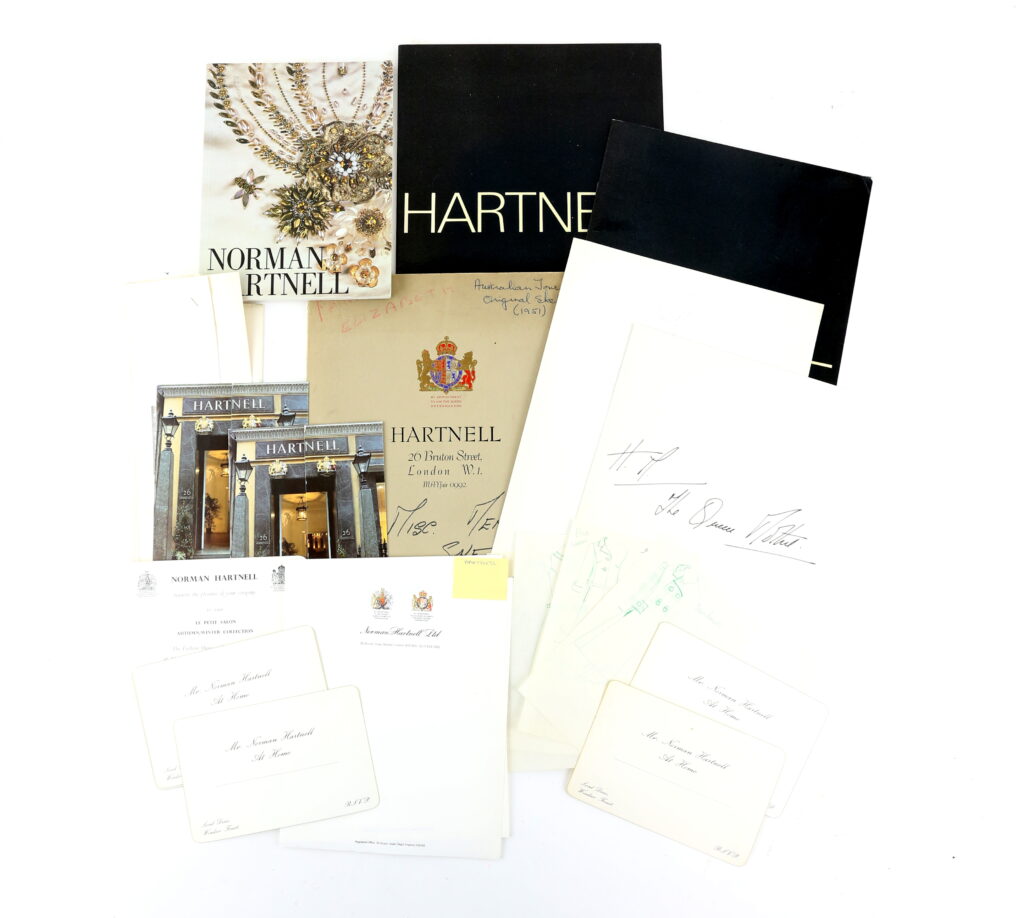 Sir Norman Hartnell had a storied career as a designer, mainly owing to his work with the British Royal Family. His royal design career started when he designed Lady Alice Montagu Douglas Scott’s wedding dress for her 1935 wedding to the Duke of Gloucester. The Princesses Elizabeth and Margaret were bridesmaids, and Queen Elizabeth (later The Queen Mother) fell in love with his designs.

Hartnell designed for nearly every senior female member of the Royal Family. For example, he designed Elizabeth’s 1947 wedding dress when she married Philip Mountbatten (born Prince Philip of Greece and Denmark), Margaret’s wedding dress for her 1960 wedding to Antony Armstrong-Jones, and The Queen’s 1953 coronation dress.

Hartnell’s work was most recently seen in July 2020, when Princess Beatrice of York borrowed one of her grandmother’s Hartnell gowns for her wedding.