TWIN PORTS — In the wedding game, it’s all about the dress, the venue, the food, the flowers — but what about the officiant?

The News Tribune heard from a handful of Northland folks who lead the ceremony, and we reveled in their stories about hiking in dress shoes, a bride in a bear costume and other tales and trends. 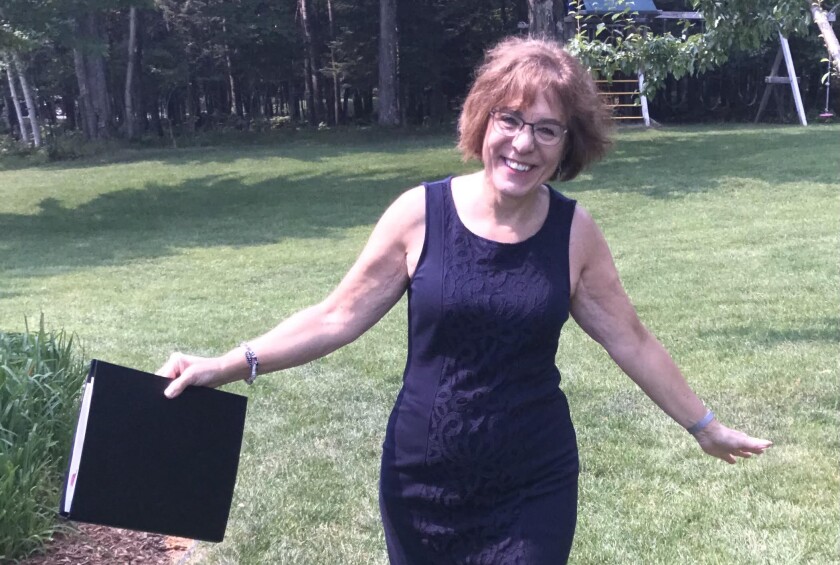 Cindy Stratioti has seen her fair share of wedding locales and outfit changes. “I’ve dressed up for Halloween. I’ve hiked the Tettegouche. I’ve done a wedding on the top of Enger Tower, doing my best to hold onto the marriage license so it doesn’t go flying. Plant your feet.

“At 6:30 in the morning or 6:30 at night. Whatever people are interested in, I’m game,” added the retired St. Louis County administrator.

Most often, couples apply for their marriage license through the county recorder’s office, and she meets them 20 minutes before their wedding. (She’s accepted wedding gigs at the grocery store.) If couples don’t have witnesses, Stratioti brings a friend or her husband to stand in.

It’s not an impulsive act, but it’s sometimes a quick and easy process for people, she explained, and her ceremonies last three to five minutes, and as long as 10. “Longer if they add songs,” she said. 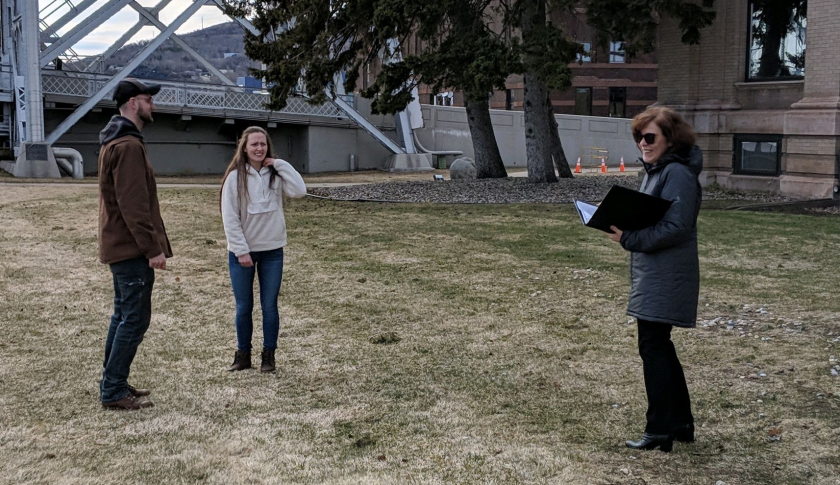 Troy and Amanda Landon’s wedding ceremony was the first Cindy Stratioti officiated after the onset of COVID-19. Their ceremony took place near Duluth’s Aerial Lift Bridge in Canal Park.

During one wedding at the Haunted Shack — a Halloween attraction in Carlton — a costume was required of her with the caveat: “Please don’t come as a pregnant nun because my mom’s very Catholic,” she said. Stratioti conducted the wedding dressed as a queen with a cape and a crown.

She has lost her script to a gust of wind, and there’s that time a four-legged ring bearer bounded on Brighton Beach rocks. “The rings were saved, and all was well,” Stratioti reported.

Conducting weddings was a nice break for Judge Heather Sweetland. In her 18 years on the bench, she oversaw multimillion-dollar civil cases, parking ticket disputes and murder trials.

And, she’d perform about 70 ceremonies a year, including that time she did six weddings on — you guessed it — Feb. 14.

“I had two courtrooms down on the first floor going at the same time. I got them done in an hour and a half,” she said. 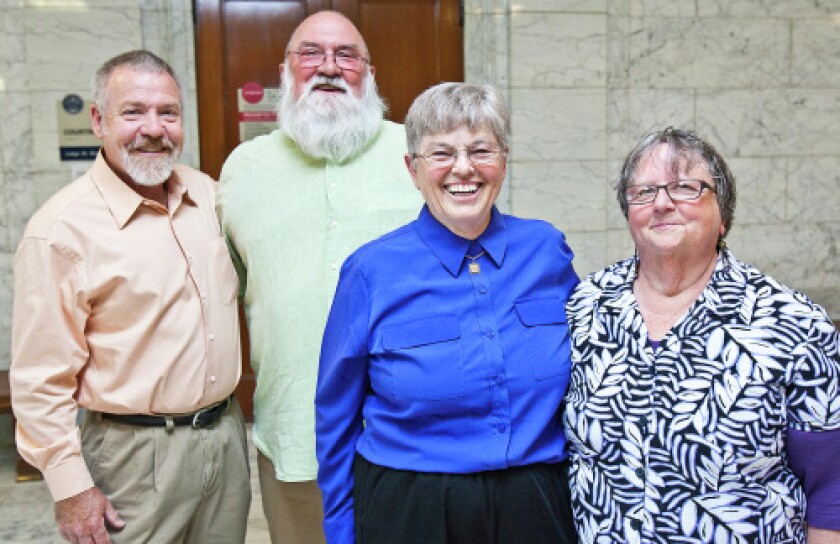 Two couples, John Dettwiler, from left, and Dick Casebeer, and Sharon Cashin and Pat Grasser, of Grand Marais, Mich., got married by Judge Heather Sweetland at the St. Louis County Courthouse in one of several weddings across the Northland on Aug. 1, 2013, the first day Minnesota law allowed same-sex marriage.

A highlight is when Minnesota saw the legalization of same-sex marriage Aug. 1, 2013. Sweetland officiated for couples who had been together for multiple decades. “I said, ‘You’ve only been together 35 years. Are you sure about this?’” Sweetland said.

“Judges don’t necessarily have a lot of fun things they do — adoptions and weddings, that’s it.”

Retired today, Sweetland continues to perform weddings because she enjoys it. 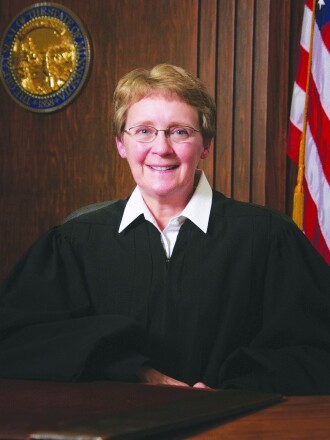 During first contact with a couple, she asks if they have a license and two witnesses older than 16 — as well as preferred names, and if they have the rings.

She’ll factor all of this into her duties.

The ceremonies are often small, direct and sometimes informal. “I’ve had people show up in T-shirts and torn jeans, and they’re fine. They’re ready. It’s their wedding,” she said.

In recent years, Sweetland received a gift from a couple that earned her a top-four ranking during a virtual meeting of the Minnesota District Judges Association: a facemask with British barrister wig curls.

Marry Me in the Northland,

focuses solely on the officiant role, referring people out for hair and makeup, photography services. Lahr has snowshoed a Lutsen trail and driven to a VFW to conduct weddings. Everyone has a reason for using a courthouse or another location, she said. Some want elements of faith without a church, and often, they want to go non-secular, or they want humor.

Lahr recalled a participant walking down the aisle in a bear costume. Once removed, the bride was in a full gown. It was a childhood inside joke.

“I have no problem hiding silly string, if they want to blast their guests,” she said.

But, there are critical parts of the ceremony that require attention. To be an effective officiant, one needs to be a good public speaker, understand the legality behind marriage and the licenses, and be able to customize it to the couple.

“Having your aunt, uncle, cousin, friend do it doesn’t mean they know how,” said Lahr. “It’s not going to be a ‘Saturday Night Live’ skit.”

Weddings are a highlight of the job for Duluth priestess Carolyn Kerns, of

. “There isn’t a ton of strife — they’ve gone through that. They want what they want, and that’s why they came to me,” she said.

Those seeking her services are often looking for an intimate, nontraditional experience.

There are two parts to a wedding: the ceremony and the legal binding. Some want the former without the latter, she said.

Sometimes, Kerns is signing paperwork, and other times, she’s working closely with a pair, hearing their stories, experiences with spirituality and finding what feels authentic for them. It’s not uncommon to substitute “two humans,” “newly married couple” or individual names for “man and wife” if the couple prefers it, she said. “There’s a lot of hard stuff around weddings, but gosh, everybody should get to do it if they want to,” she said.

And in the end, a couple pursues a ritual for a reason: It’s a choice to acknowledge this commitment with each other and loved ones. “You make specific promises about how you’re going to be in the future. That’s witnessed both in time and space and, in my worldview, also in spirit. That’s a sacred thing,” she said. 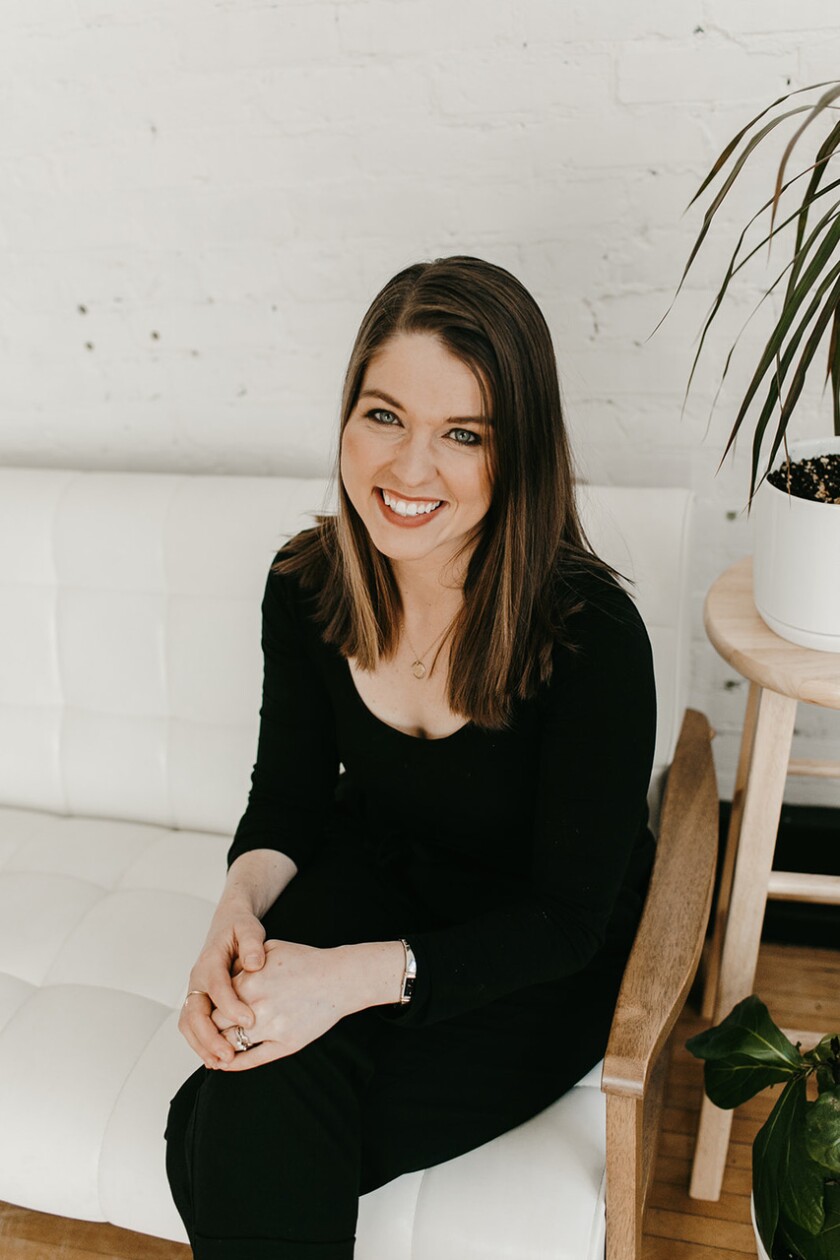 Just in case the officiant can’t make it or the appropriate paperwork wasn’t filed, Mary Carlson, in proper planner form, is ready with a backup: herself.

is ordained to perform a wedding ceremony, but would rather not if she doesn’t have to. Carlson’s hands are full with wedding day coordination and decor rental. “It’s wearing too many hats,” she said, so she’ll often refer couples to

Marry Me in the Northland

Her business assists about 300 weddings per year. She sees more couples returning to churches or more personalized ceremonies, which tells a couple’s story rather than filling a mold. Also, more people are sharing vows privately.

Carlson sees a range of unity ceremonies ranging from couples lighting a candle, planting a tree or taking shots of their favorite whiskey.

As for challenges, cellphones are a common one. Either they’re ringing during a ceremony, or in order to snag their own pic, excited guests end up blocking the hired professional. “If your phone is out at a ceremony, there will be a professional picture taken of it,” Carlson said.

As the wedding planner, Carlson has asked family members to return to their pew or had to redirect folks from stepping in front of the videographer’s camera. So, she sees more couples request unplugged ceremonies.

On wedding days, she and her crew average about 20,000 steps, some of those in high heels. Asked what keeps her going, Carlson said: “The hug at the end of the night.”

“I live for those genuine thank-yous. Your feet may hurt real bad, but they keep coming back for more,” she said.