The first wife of George Harrison, Pattie Boyd, admitted that her wedding to The Beatles guitarist was “not the wedding I had dreamed.” Instead of the white wedding she had yearned for since childhood, Boyd settled for a brief ceremony at the Epson Registry Office in Surrey. She recalled that although she was happy to become Harrison’s wife, there were many aspects of that day Boyd would have loved to have done differently.

At 19 years old, Boyd was sent by her modeling agency to Paddington Station on March 2, 1964, for a small part in The Beatles’ first film, A Hard Day’s Night. She met John Lennon, Paul McCartney, Ringo Starr, and George Harrison, whom Boyd said “was the best-looking man I had ever seen,” according to Far Out Magazine.

Harrison appeared to be equally as smitten with Boyd, for as filming ended for the day, Harrison asked the young model, “will you marry me?” When she didn’t respond, he continued: “Well, if you won’t marry me, will you have dinner with me tonight?”

Boyd had a boyfriend, so she declined. However, after breaking it off with photographer Eric Swayne, she was asked to take care of her final obligations for the film, where she met the guitarist again. Harrison reiterated his dinner offer, and Boyd accepted. From that moment on, they were inseparable.

In her book “Wonderful Tonight: George Harrison, Eric Clapton, and Me,” Boyd wrote of her wedding day. However, the day was not what she had envisioned since childhood.

The couple tied the knot on Jan. 21, 1966. “It was not the wedding I had dreamed of,” Boyd admitted. “I would have loved to be married in a church, but Brian [Epstein, The Beatles’ manager] didn’t want a big fuss.”

“When he said it should be a quiet register-office wedding, George agreed. I always thought I’d have a big white wedding, as all little girls do, then have children and live happily ever after, not be divorced like my mother,” Boyd wrote.

“He didn’t give me an engagement ring. But we did go to Garrard, the royal jewelers in Regent Street, to choose my wedding ring,” she wrote. “The ring I chose was a wide gold band that looked like a little brick wall made from yellow, pink, and white gold. It was so unusual, flexible, and felt lovely on my finger.”

Boyd recalled the room of the registrar’s office being “hot and stuffy” and that both Epstein and Paul McCartney, Harrison’s best man, attended. Otherwise, the small ceremony’s attendees were primarily family and friends of the couple.

The model’s wedding attire may not have been white, but it was indeed fashionable 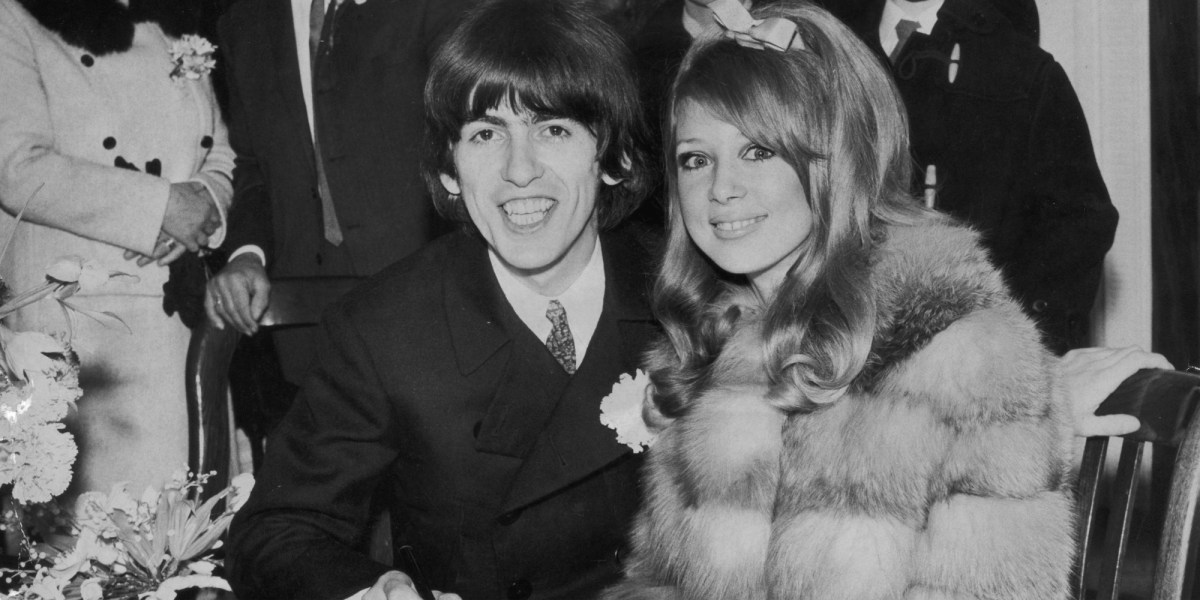 Although Boyd would have loved to marry in a traditional white wedding dress, Boyd turned to 1960s fashion designer Mary Quant to dress her for the big day, reported Vogue.

“I bought a Mary Quant pinky-red shot-silk dress, which came to just above the knee. I wore it with creamy stockings and pointy red shoes,” Boyd said in her autobiography.

“On top, because it was January and cold, I wore a red fox-fur coat that George gave me. [Quant] She made George a beautiful black Mongolian lamb coat.”

The couple had a small reception followed by a press conference, orchestrated by Epstein, where they spoke of their new marriage.

RELATED: Pattie Boyd Saw Her Sister Pass a Lit Joint to Princess Margaret After She and George Harrison Were Arrested for Drugs