A beautiful lady Kelly Anne Ferraro treated her blind groom to a pleasant surprise as she wore a tactile dress for their wedding ceremony.

The bride’s dress is embroidered with textured cotton flowers and lace which helped him to feel how she looked.

The groom was moved to tears

The groom Anthony Ferraro, a paralympian was moved to tears on feeling the dress.

Do you have a groundbreaking story you would like us to publish? Please reach us through info@corp.legit.ng! 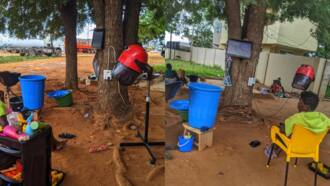 It’s the TV for me: Massive reactions as inspiring photos of hairdressing salon under tree surface online

People reported that the idea for the dress was inspired by what Kelly wore on their first date when they first met back in 2017.

Reacting to the dress, the groom said:

“My mind was blown. I started crying. And it was just like – was able to see Kelly. That was the best part, I was able to feel her dress.”

Narrating how he felt the dress, Anthony said Kelly would put his hands on her dress at the occasion.

“Once she gets to me, she puts [my] hands on [her] dress. My mind was blown and I started crying.”Tactile stuff is really big to me. It creates an image of what you look like in my head. Kelly looked like an angel.”

A video capturing their wedding occasion was shared by Asfvision on Instagram. 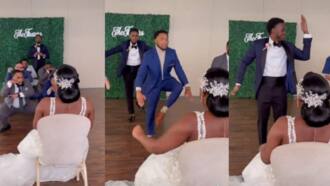 “Congratulations!! I’ve been married to my best friend and soulmate for 32 years. I wish you both all the happiness in the world!!! ❤️”

“Congratulations! Many blessings of a long, happy, healthy life together! One Love!”

“There was nowhere to go but everywhere. So just keep rolling under the stars.” -Kerouac Many many blessings to the both of you!”

“I just cried again! It was such an absolutely beautiful and perfect day. Congratulations my loves!!! ❤️❤️”

Meanwhile, Legit.ng previously reported that a pretty lady had fallen in love with a disabled man.

The lady named Mayfair stated that when they shared about their love life online, people had so many nasty comments like the man must be rich and she is targeting his wealth, Love Don’t Judge reports.

Veins don show for him face; Young man cries at night in video like a baby after being heartbroken, many react

Their love has survived for a long time and there is a baby on the way. Winston said even though he expects negative comments, it always feels strange reading them.

Mayfair revealed that they were best of friends before they became lovers, revealing that they spent so much time together. She added that though they got married in August 2020, their wedding photos came out much later. Mayfair talked about how they got much media attention.