Prince Charles is never one to shy away from a re-wear. The Prince of Wales not only has two longtime favorite coats, but also a preferred gray, three-piece suit, which he has worn to many daytime events. Most notably, Charles sported this outfit to his son, Prince Harry’s 2018 wedding to Meghan, Duchess of Sussex. Today, he pulled the suit out once again to attend Royal Ascot.

The future king originally purchased the suit, which includes a morning coat, in 1984 from the brand Anderson & Sheppard. He spoke about the outfit in an interview with British Vogue, noting that he preferred wearing this suit to Meghan and Harry’s wedding, rather than something new.

“In the case of that particular morning coat, as long as I can go on getting into it, I only wear it a few times a year, in the summer, so obviously you want to keep those sorts of things going,” the Prince of Wales said. “But if I can’t fit into them, then I just have to have something new made. But I’m not sure quite how radically different they can be at my age.” 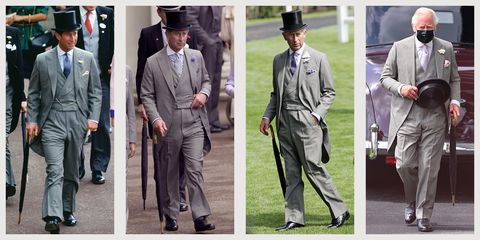 For the 2021 Royal Ascot, the Prince of Wales paired the suit with a purple tie and pocket square, plus a black top hat. Though the suit remains the same, the Prince often swaps out his shirts and ties. In the past, Charles has chosen blue, lavender, and white options.

The Prince of Wales noted that he would rather hang on to an item for a long time, rather than continuously purchasing new clothes. He noted, “I happen to be one of those people who’d get shoe–or any item of clothing–repaired if I can, rather than just throw it away.”