Princess Charlene of Monaco was pictured wearing her glittering wedding gift from Prince Albert during a reception with Maison Van Cleef & Arpels at the Prince’s Palace.

Princess Charlene was given a stunning wedding gift from her husband Prince Albert of Monaco after they tied the knot in 2011, but she is rarely spotted wearing it.

The royal gifted his wife with a diamond and sapphire Ocean tiara featuring 1,200 precious stones and created by Van Cleef & Arpels, the jewellers who were responsible for Albert’s parents Prince Rainier III and Grace Kelly’s wedding jewellery in 1956. The tiara, which comes with a matching set of drop earrings, was said to be a sweet nod to Charlene’s love of water and career as an Olympic swimmer, and it features round wave-like symbols.

“There are more than 850 diamonds,” explained Van Cleef & Arpels CEO Stanislas Quercize. “The idea of the necklace is to represent sea spume.

“And so we included 359 sapphires. We chose three shades of blue, evoking the world’s different seas from the waters of the coast of Monaco to the ocean around Africa. To crown the work 11 pearl-cut diamonds evoke droplets of water.”

While Charlene hasn’t been spotted wearing the tiara to a royal engagement, she has turned it into a necklace for a few rare outings – most recently, for a cocktail reception with Maison Van Cleef & Arpels in the gardens of the Prince’s Palace.

The royal paired her dark blue ruffled dress with a statement necklace, which was one of the glittering ocean pendants on a silver chain. 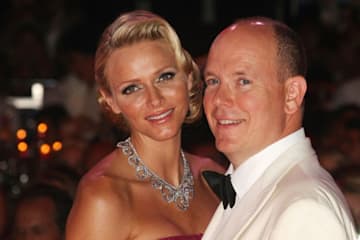 She previously wore all of the pendants together at the 63rd Red Cross Ball in 2011, paired with a bright pink strapless gown.

Princess Charlene and Prince Albert recently celebrated their eleventh wedding anniversary after tying the knot in a three-day celebration that began on 30 June 2011. 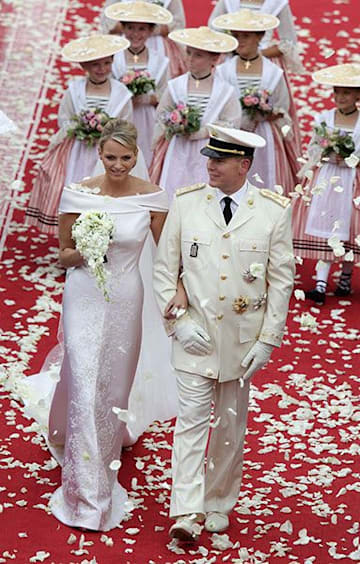 The couple enjoyed a concert by classic rockers the Eagles the night before they exchanged vows in a civil ceremony on 1 July, and they then had a religious ceremony on 2 July in front of guests including Prince Edward, his wife Countess Sophie, and Naomi Campbell.

For the latter, Charlene looked beautiful in an off-the-shoulder Armani Privé silk gown, which took three seamstresses 2,500 hours to make. She finished off her look with a diamond floral headpiece tucked into her chignon.