The Princess of Wales swapped her iconic wedding dress for an unconventional pink outfit for her honeymoon with ex-husband Prince Charles – see how it compares to Duchesses Kate and Meghan.

Princess Diana‘s first wedding dress was one of the most memorable gowns of all time, alongside her two future daughters-in-law, Prince William’s bride Kate Middleton and Prince Harry’s wife Meghan Markle.

Unlike the Duchesses of Cambridge and Sussex, the Princess of Wales, then 19, changed into a colourful second bridal outfit, which is much lesser-known. All eyes were on Diana as she walked down the aisle at Westminster Abbey on 29 July 1981 to tie the knot with her ex-husband Prince Charles.

She wore a puff-sleeve dress by David and Elizabeth Emanuel with a record-breaking 25-foot train, before swapping her gown for a very unexpected pink ensemble as she headed on her honeymoon with her new husband.

Pictures show the newlyweds waving to crowds as they left Romsey Station for their trip to Gibraltar, with Charles looking dapper in a grey suit while Diana rocked a pink midi dress with a fitted waist and a jacket layered over the top, both designed by David Sassoon for Bellville Sassoon. She finished off her look with her short hair styled in its classic bouncy curls and a matching pastel-coloured hat and clutch bag.

In fact, two jackets with prairie collars and frilled sleeves were actually created for the ensemble – one with shorter sleeves (which she wore following her nuptials), and another with long sleeves in case of cooler weather. Genius!

With a classic silhouette and multiple coat options, the bespoke outfit later became part of the royal’s working wardrobe – she sported the long-sleeved version on the royal tour to Australia in 1982, and to open a hospital in Grimsby in 1983.

Meanwhile, her future daughters-in-law opted for much more traditional white gowns for their wedding days. The Duke of Cambridge’s wife Kate swapped her Sarah Burton for Alexander McQueen lace gown for a simpler dress by the same designer featuring a satin A-line skirt and a sweetheart neckline, which she accessorised with a sweet cream cardigan.

Meanwhile, the Duke of Sussex’s bride Meghan changed out of her simple bateau neck gown by Givenchy and into a gorgeous halterneck dress by Stella McCartney for her evening reception. 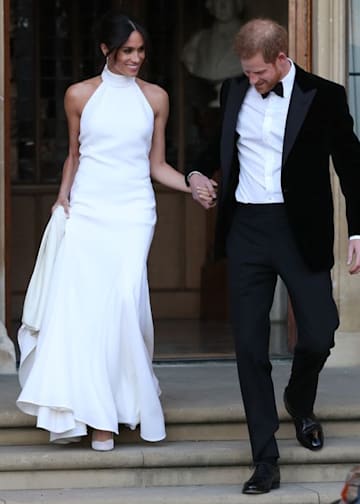 According to People, Princess Diana almost didn’t have her pink wedding dress, since she was initially turned away from the Bellville Sassoon shop in London. She was reportedly shopping for an outfit for her engagement photos near closing time, and the sales associate recommended she visit the nearby Harrod’s store after failing to recognise the royal.

“You can imagine how Belinda [Bellville] and David [Sassoon] felt when they realized the future Princess of Wales had been turned away,” said Matthew Storey, Curator of Royal Style in the Making fashion exhibition at Kensington Palace. 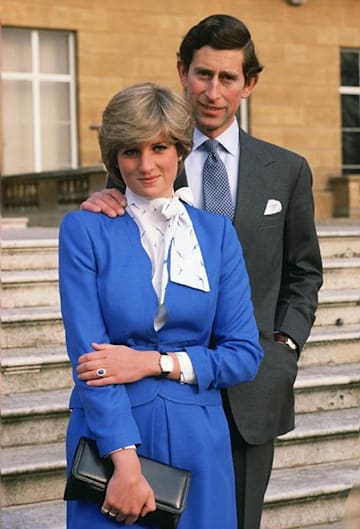 Diana and Charles at their engagement photocall

Luckily, Diana returned to the shop with her mother and she went on to have a close relationship with the designers, who also created the blue ensemble she wore for her engagement announcement.