Queen Elizabeth II knew better than most the symbolism of fashion.

One of the most photographed people in the world during her lifetime, the late Queen lived her life in the public eye.

The abdication of the Queen’s uncle and her father’s death at 56 left the monarchy in crisis, and from the beginning of her reign, the Queen used clothes to communicate a consistent message: “That she’s steadfast, she’s dependable, that there’s a continuity of the monarchy,” says Dr Emily Brayshaw, Honorary Research Fellow at UTS.

Over the years, the Queen proved adept at deploying her clothes in the interests of soft diplomacy.

In a nod to local culture, she wore green in Ireland and maple leaf motifs in Canada. When the Queen met with Scott Morrison in 2021, she wore her famous diamond and platinum wattle brooch, a coronation gift from the Australian people and a piece she wore repeatedly over the years.

“The Queen’s dressing got better as she aged,” says McNeil, largely due to the influence of Angela Kelly, who joined the palace in 1994 and eventually became the Queen’s senior dresser and a trusted confidante.

In her 2019 book, The Other Side of the Coin: The Queen, the Dresser and the Wardrobe, Kelly recounted how she updated the monarch’s style early in her tenure at the palace.

“The Queen was wearing a lot of dark green, navy, and red, and I had also noticed that some of the older pieces … which had been the height of fashion a few years before, had begun to look a little tired,” she wrote.

The Queen’s wardrobe called for “more vibrant colours and some fresher designs” and outfits that were “chic, fitted and elegant”.

The Queen prioritised visibility in her fashion choices, recognising that when she was in public, she was always on display.

“She has dozens and dozens of clear transparent umbrellas … edged with fabrics that coordinate with the rest of her wardrobe,” notes McNeil.

Thriftiness in the palace

The Queen, raised during the austere years of the Depression and World War II, embodied “frugal modernity”, says McNeil.

According to Kelly, a royal outfit could have a 25-year lifespan. After two or three public outings, a piece would be modified or retired to the Queen’s private wardrobe. Always thrifty, the Queen liked her clothes “to be adapted and recycled as much as possible”, Kelly wrote.

Her wardrobe staples – hats, gloves, handbags, court shoes – remained constant throughout her reign and recalled the sartorial conventions of a bygone era. They also constituted her work wear, signalling she was on duty.

“She’s got the cashmere cardigan, she’s got the pearls, she’s got her handbag, she’s got her work shoes, and all of these show us that even though she’s elderly and perhaps not well … this is an official occasion, and she is ready to work,” says Dr Emily Brayshaw.

It took a team of 350 women 7 weeks to make the princess’s wedding dress.(AP)

In the austerity of postwar Britain, the 1947 wedding of Princess Elizabeth and Philip Mountbatten, who had recently been designated the Duke of Edinburgh, offered a rare moment of glamour.

Royal couturier Norman Hartnell designed the princess’s wedding dress. Made from ivory silk satin and featuring a sweetheart neckline and long sleeves, the dress was encrusted with thousands of pearls and crystals.

The 4.5-metre train featured embroidered star flowers, roses, jasmine blossoms and ears of wheat to symbolise the nation’s rebirth and growth after the war, and was inspired by Renaissance painter Sandro Botticelli’s 15th-century painting Primavera.

The bride paid for the material for her dress with rationing coupons she had saved and an additional 200 coupons gifted to her by the government. She dutifully returned the many coupons she generously received from the public to each person, accompanied by thank-you notes. 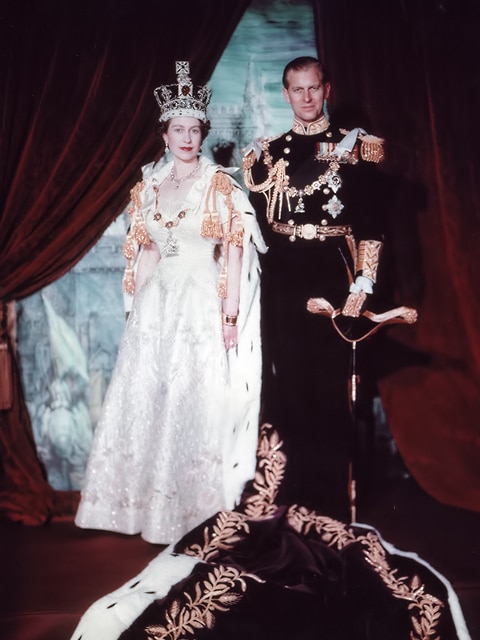 The Queen turned again to Hartnell to design the dress for her 1953 coronation, the first to be broadcast on television.

“He was kind of the designer of choice for society socialites, for their mothers, for aristocrats, and he also dressed silver-screen stars like Marlene Dietrich, Vivien Leigh and Judy Garland,” says Dr Emily Brayshaw.

With it, she wore the Robe of the Estate, made from purple velvet and extending more than 6 metres in length. Wheat sheaves and olive branches embroidered in gold thread on the robe symbolised prosperity and peace. The Queen cherished the summers she spent at Balmoral, a Scottish estate in the family since 1852.(Anwar Hussein/WireImage)

Brayshaw’s favourite royal outfit is an “achingly chic” teal wool skirt suit the Queen wore at Aberdeen airport on her way to Balmoral in 1974.

“She’s got a coordinating feathered hat – I love feathers – and she’s got a group of her little dogs with her,” she says.

“In a lot of ways, that look is very, very contemporary. You could wear something like that today and still look really chic,” says Brayshaw. 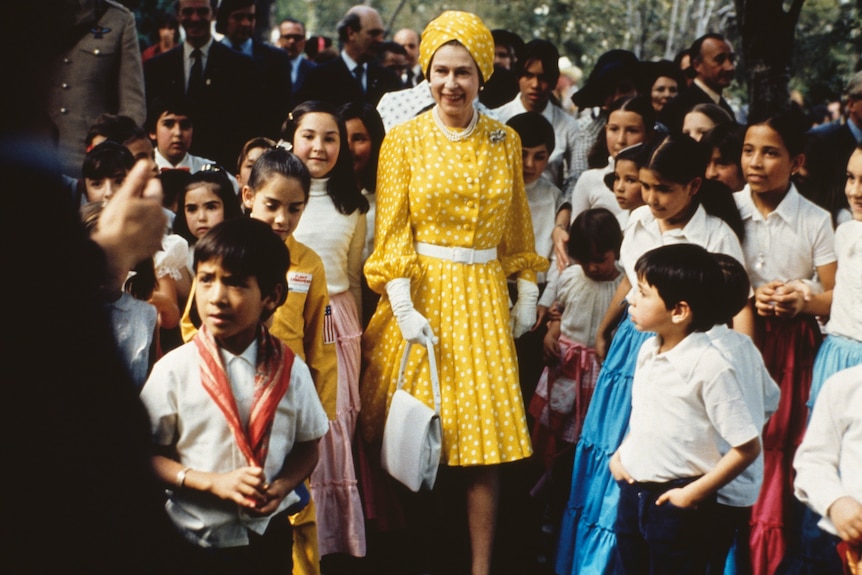 Queen Elizabeth’s four-day trip to Mexico in 1975 marked the first official visit of a British monarch to the country.(Serge Lemoine/Hulton Archive/Getty Images)

While Norman Hartnell created the fairytale evening wear of the Queen’s early reign, the monarch favoured another British designer for her day wear: Hardy Amies, who became a royal dressmaker in 1955.

Amies, who worked with the Queen until the 90s, “established this crisp, understated style of dress that she had”, says Brayshaw.

The designer, who felt the Queen should appear approachable rather than chic, designed the sunshine yellow polka dot dress the Queen wore during her first visit to Mexico in 1975. Royal milliner Freddie Fox created a matching turban, a 70s flourish that still looks fresh today. 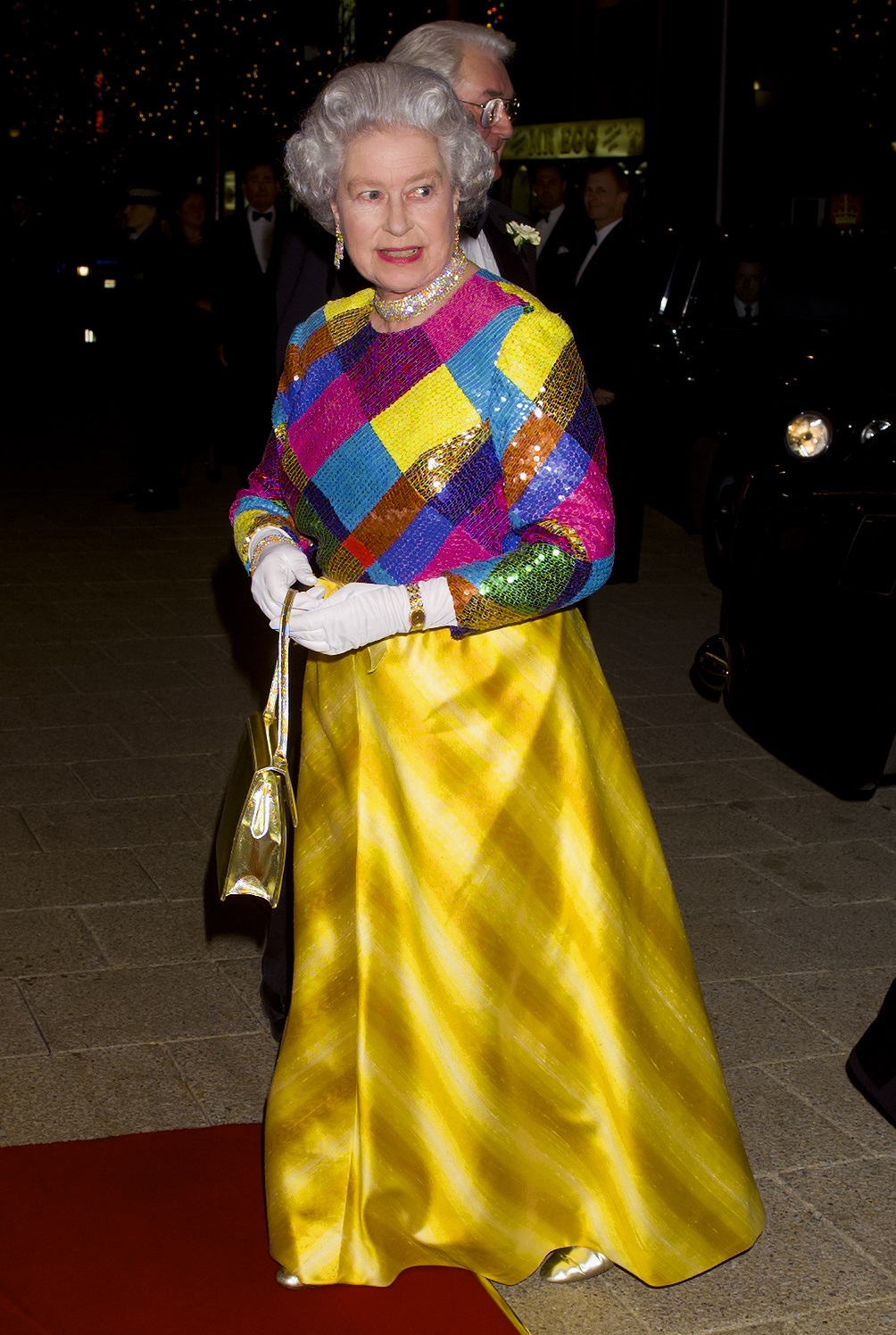 “She’s fun to work with and very knowledgeable about fabrics,” designer Karl-Ludwig Rehse said of the Queen.(Indigo/Getty Images)

While inherently conservative in both style and nature, the Queen was known to take the occasional sartorial risk.

“She is well known for her sense of humour, and her clothes have a jaunty playfulness to them at times,” says Peter McNeil.

One of her boldest outfits was the ‘Harlequin’ dress she wore to the Royal Variety Performance in Birmingham in 1999.

Designed by royal dressmaker Karl-Ludwig Rehse, the gown featured a multicoloured bodice in a patchwork of sequinned diamonds and a gold skirt with chevron stripes. The Queen, pictured with Carole Middleton and Camilla, Duchess of Cornwall, was said to be overjoyed at the wedding of her eldest grandson and Catherine Middleton.(Reuters)

In 2011, all eyes were on the British royal family as more than 100 million people around the world tuned in to see Catherine Middleton and Prince William tie the knot.

The Queen wore an Angela Kelly double crêpe wool coat and matching dress in sunshine yellow, a hue selected to evoke the sense of hope accompanying the royal wedding.

Kelly recalled creating the dress in her memoir: “To mimic the sun’s rays, we cut the material for the coat larger than was necessary to allow for pleats to be pinched in and the matching hat – a matador shape made of crêpe and sinamay – was trimmed with two handmade satin roses and leaves. It was perfect.”

The Queen accessorised her outfit with the True Lover’s Knot brooch, a favourite piece she often wore throughout her reign, including at the wedding of her sister Princess Margaret in 1960. The Queen was the first British monarch to visit the Republic of Ireland since its independence in 1937.(Bryan O’Brien/Anadolu Agency via Getty Image)

The Queen became the first British monarch to visit Ireland in 100 years when she touched down in Dublin in 2011.

After a century marred by conflict, the royal tour represented an important milestone in a troubled history.

To mark the momentous occasion, the Queen wore a jade-green-coloured crêpe coat over a blue and green patterned dress, an outfit designed by palace couturier Stewart Parvin in a tribute to the Emerald Isle.

“[It was] very carefully thought through,” says Peter McNeil.

Opening ceremony of the Olympic Games, 2012 The Queen was keen to have a speaking part in the skit Danny Boyle directed for the London Olympics Opening Ceremony.(YouTube: Olympics)

The Queen’s entrance at the 2012 London Olympics Opening Ceremony was arguably the most dramatic of her reign. A short film showed Her Majesty, wearing a crystal and lace peach-coloured cocktail dress, greeting James Bond, played by Daniel Craig, at Buckingham Palace, who escorts her to a waiting helicopter.

Tasked with designing the Queen’s ‘Bond girl’ dress, Angela Kelly chose peach for its visibility and to avoid association with any of the participating nations.

The palace made not one but two dresses – one for the Queen and one for the stuntman, Gary Connery, who wore the peach cocktail dress as he leapt from the helicopter as it hovered above the stadium at the Opening Ceremony. The Trooping of the Colour has celebrated the official birthday of the British Sovereign since 1748.(Reuters: Toby Melville)

To mark her 90th birthday at the Trooping the Colour parade in 2016, the Queen wore another Stewart Parvin creation, this time in neon green.

If Her Majesty was hoping to grab people’s attention, the tactic worked. The ‘green screen’ dress inspired a multitude of memes that proliferated across the internet.

“Older women disappear – they become invisible. People overlook them, but the Queen is the Queen. We want to see her.”

The Queen’s preference for bright colours in her later years signalled she had no intention of retiring from her role as monarch – or the spotlight. The 2017 State Opening of Parliament was a more casual affair than was customary, with the Queen electing to arrive via car rather than the traditional carriage.(AP: Carl Court)

When the Queen attended the State Opening of Parliament in the House of Lords in 2017, she opted to wear a coat and day dress rather than traditional ceremonial garb.

Many were quick to point out that the Queen’s blue hat, which had flowers made from blue feathers and yellow seed pearls affixed to the crown, echoed the blue and yellow of the European Union flag, taking it as a nod to the Queen’s true feelings about Britain’s decision to leave the EU.

However, Angela Kelly, the Queen’s dresser, maintained the hat was just a hat – nothing more. “It was a coincidence but, boy, did it attract a lot of attention, and it certainly made us smile,” she recalled in The Other Side of the Coin. The Queen told Angela Kelly that she loved seeing all the florals on the catwalk at Richard Quinn’s show.(Yui Mok — Pool/Getty Images)

The Queen embraced her status as a style icon at the 2018 London Fashion Week when she made a surprise appearance with the other queen of fashion – Anna Wintour – in the front row of British designer Richard Quinn’s show.

Arts in your inbox

The Queen, 91 at the time, wore an Angela Kelly outfit for the occasion: a Chanel-inspired suit in duck-egg blue, decorated with aquamarine Swarovski crystals.

After the show, the Queen presented Quinn with the inaugural Queen Elizabeth II Award for British Design. It was an occasion that “showed her dedication to British manufacturing and British style”, says Dr Emily Brayshaw.