EMBARGOED TO 2230 SUNDAY SEPTEMBER 18MANDATORY CREDIT: Ranald Mackechnie EDITORIAL USE ONLY. The photograph shall not be used without permission from Royal Communications. There shall be no commercial use whatsoever of the photograph (including any use in merchandising, advertising or any other non-editorial use). The photograph must not be digitally enhanced, manipulated or modified in any manner or form when published. The photograph is free for use until September 25th 2022. Thereafter the portrait is available only via Camera Press. Handout photo issued by Buckingham Palace of Queen Elizabeth II photographed at Windsor Castle in May 2022. Issue date: Sunday September 18th, 2022.Photo credit should read: Royal Household/Ranald Mackechnie/PA Wire NOTE TO EDITORS: This handout photo may only be used in for editorial reporting purposes for the contemporaneous illustration of events, things or the people in the image or facts mentioned in the caption. Reuse of the picture may require further permission from the copyright holder.

The smiling photo of Queen Elizabeth that was released on the eve of her funeral comes with a story that shows off the late monarch’s wit.

Photographer Ranald Mackechnie appeared on Lorraine to speak about the previously unseen portrait, taken in May at Windsor Castle ahead of the Queen’s Platinum Jubilee celebrations the following month.

Mackechnie added that the Queen has sat for many portraits over the years, and she “makes it easy” for the photographer.

RELATED: Funeral Guest Says ‘You Could Hear a Pin Drop’ as Queen’s Coffin Was Lowered into Royal Vault 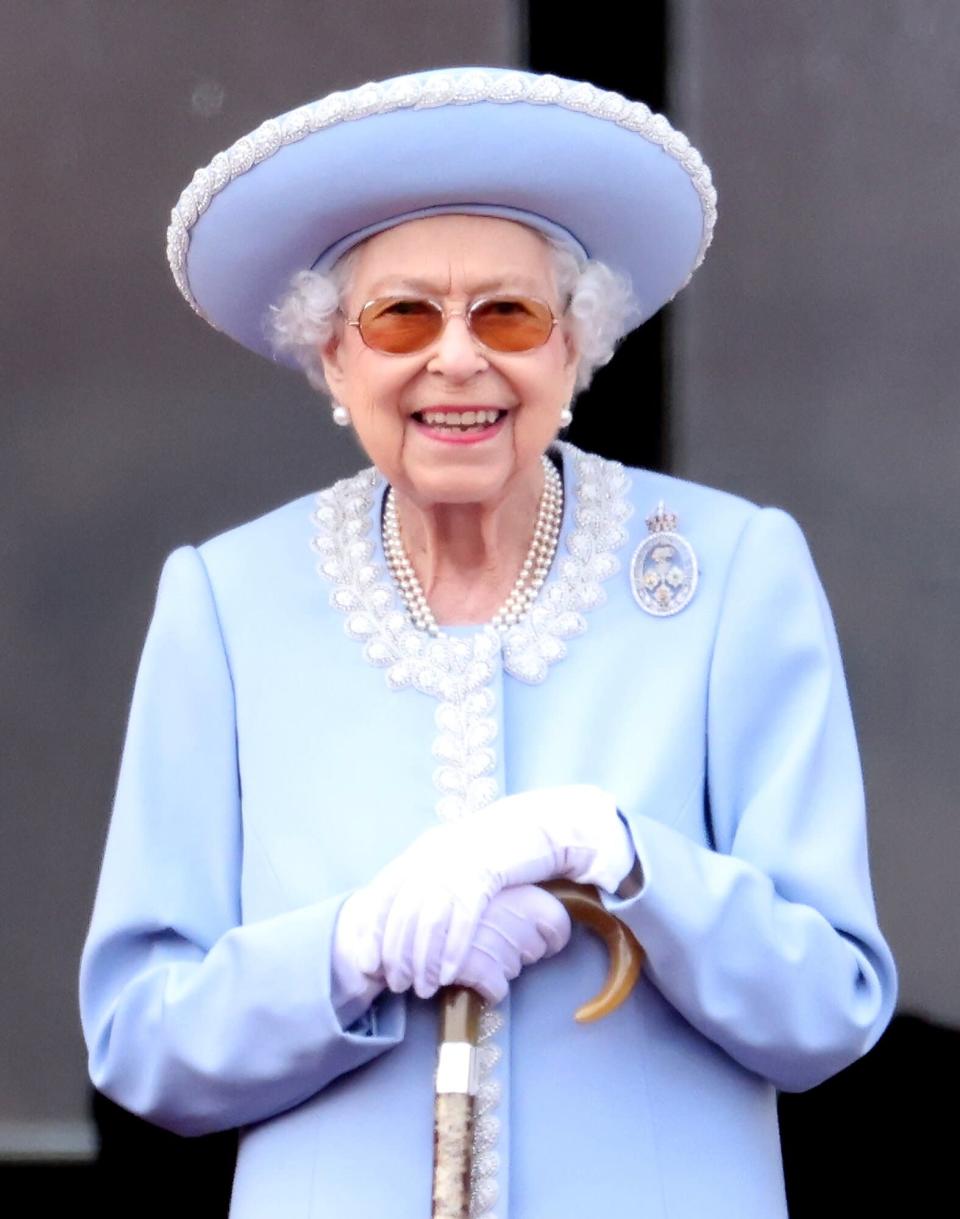 Queen Elizabeth II smiles on the balcony during Trooping The Colour on June 02, 2022 in London, England. The Platinum Jubilee of Elizabeth II is being celebrated from June 2 to June 5, 2022, in the UK and Commonwealth to mark the 70th anniversary of the accession of Queen Elizabeth II on 6 February 1952

Wearing a blue ensemble and her signature pearls (which Kate Middleton has been recently wearing), the monarch’s blue eyes sparkle as she flashes a smile in the portrait.

In a recent BBC documentary, Camilla, the Queen Consort, paid tribute to the Queen, saying: “She’s got those wonderful blue eyes, that when she smiles they light up her whole face. I will always remember her smile. That smile is unforgettable.”

Mackechnie was behind the specially commissioned photograph that was released to mark the beginning of the Platinum Jubilee celebration weekend in June.

The portrait, which was shot by Ranald Mackechnie, was taken in the Victoria Vestibule at Windsor Castle on May 25. Captured in the background are the Castle’s Round Tower and the statue of King Charles II, which stands in the Quadrangle of the Castle. Unlike past Jubilee portraits (she’s had three!), the Queen is remarkably understated in a pale blue coatdress (which she ended up wearing again for Trooping the Colour, her birthday parade!) and her go-to pearls.

Queen Elizabeth’s family gathered for her state funeral, committal service and burial on September 19 following her death on September 8.

Can’t get enough of PEOPLE’s Royals coverage? Sign up for our free Royals newsletter to get the latest updates on Kate Middleton, Meghan Markle and more!

As the new monarch, King Charles and his wife Queen Camilla “will show the nation that the monarchy is still offering stability and an example of service and duty,” a source close to the King tells PEOPLE in this week’s cover story.

Adds Charles’s former press secretary Paddy Haverson: “He will apply himself 1,000 percent to the job at hand.”