HUDSON – Friends and relatives of Hudson residents Ryan Bowen and Kelsey McCarthy attended their marriage and reception on Nov. 20 at the historic Hamilton Hall in Salem. 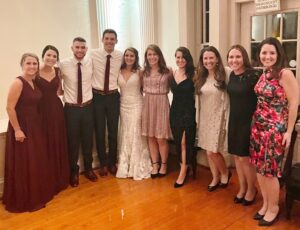 Festivities followed at the Salem Waterfront Hotel. The bridegroom is a graduate of Lasell College and the son of Brian and Kim Bowen of Hudson. The bride is a graduate of Worcester State University and the daughter of Michael and Jayne McCarthy of  Boothbay Harbor, Maine, formerly of Berlin.

They will honeymoon in Disney World in 2022. 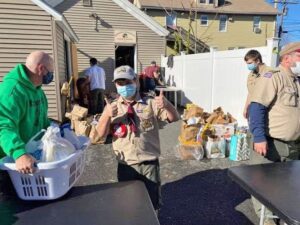 Troop 2 Hudson Boy Scout Tyler Houle, center, gives a thumbs up to the Troop’s food collection. Houle and Vincent Hughes, at left, were among those delivering food to the Hudson Community Food Pantry at the end of a successful door-to-door collection on Nov. 21.

Boy Scout Troop 2 Scoutmaster Chris Houle said that the Scout contingent in the Hudson Veterans Day parade was led by two of the troop’s female Scouts, “certainly a first for Troop 2.”

Hudson resident Pat Mulkern, a 40-year employee in the Hudson Police and Fire Department offices, marked her 90th birthday on Nov. 15. She retired four years ago.

Pat was honored with a family party on Nov. 14 by her children and grandchildren, including her son, John Mulkern, a retired USMC officer; his daughter, Mikaela, of Virginia; Patty Mulkern; Maureen Mulkern and six grandchildren.

A native of Lexington, Pat moved to Hudson in 1962 with her husband, the late “Eddie” Mulkern.

The Winter Fest Craft & Vendor Fair, featuring a colorful “Festival of Trees,” will be held on Saturday, Dec. 4 at the Hudson/Concord Elks on Park Street from 9 a.m. to 3 p.m.

Sponsored by the Hudson High Jr. Boosters, events will also include crafts for kids, “make and mail” Santa letters, raffles and more. All are welcome.

For the eleventh year in a row, George Danis CEO and his team at Plastic Molding Mfg. on Tower Street served free Thanksgiving dinners to 130 senior citizens last month.

Added to the “grab-n-go” dinners were thoughtful sweets and notepads from State Rep. Kate Hogan.

Some local residents were complaining about their latest real estate tax bill following a recent evaluation of  town property, a program by which the Assessors were equalizing  land valuations.

Will Kirkpatrick displayed one of his carved duck decoys in the window of Wheeler Pharmacy.