The nation is in mourning following the death of Queen Elizabeth II who sadly passed away on 8 September.

Royal fans flocked to pay their respects in numerous touching ways, with many opting to leave floral tributes in and around London.

WATCH: The Queen’s Funeral – The most emotional moments

In fact, so many people came to leave floral tributes in Green Park following news of the Queen’s death, a second designated memorial site had to be created in Hyde Park last Tuesday.

MORE: World leaders and European royals pay their respects at Queen’s funeral – all the photos

According to Royal Parks, all floral tributes will be left on site until “all ceremonial activity has taken place.” It is expected that they will be removed from park areas during a period from seven to 14 days after the Queen’s state funeral.

Tributes left outside Royal properties are expected to remain for the duration of the Royal Family’s mourning period.

Throughout this process, the charity explained how it will continue to monitor all tributes, adding that any deteriorated tributes will be moved to Hyde Park nursery to prepare them for composing.

Once all the floral tributes have been removed, they will be processed to separate any packaging, cards and labels, before being transformed into composting in nearby Kensington Gardens.

This organic composted material will be used on shrubberies and landscaping projects across the Royal Parks.

On Monday the late monarch was honoured in a poignant funeral at Westminster Abbey before being laid to rest at St George’s Chapel. The royal family re-united to bid their final farewell to the beloved Queen who reigned for 70 years.

Royal fans were quick to spot the Queen’s funeral flowers and foliage requested by her eldest son, King Charles III. Imbued with symbolism, the Queen’s flowers featured rosemary, for remembrance, and myrtle cut from a plant which was grown from a sprig of myrtle in the Queen’s wedding bouquet. 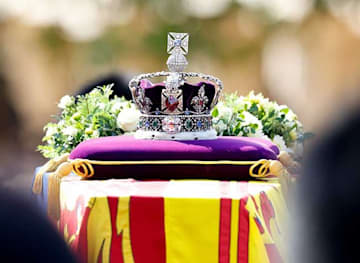 The wreath flowers were cut from the gardens of royal properties

At the King’s request, the Queen’s coffin wreath was constructed sustainably using a nest of English moss and oak branches.

The Queen and Philip have now been reunited following her private burial service in St George’s Chapel at Windsor Castle. The couple have been laid to rest together in the tiny King George VI Memorial Chapel, alongside the Queen’s father, George VI, her mother, the Queen Mother, and sister Princess Margaret.

Make sure you never miss a ROYAL story! Sign up to our newsletter to get all of our celebrity and royal news delivered directly to your inbox.