The 57-year-old “Avengers: Endgame” actor shared a snap across his social media platforms from their Jewish wedding ceremony in New York.

The couple met while working on the 2003 film “Gothika” where Robert starred alongside Halle Berry, and Susan was a budding producer.

ROBERT DOWNEY JR. TALKS LIFE AFTER IRON MAN, ‘AVENGERS’: ‘I AM NOT MY WORK’

Susan and Robert welcomed their first child into the world in February 2012, a son named Exton Elias.

On Nov. 4, 2014, she gave birth to their daughter, Avri Roel. Susan is also step-mother to Robert’s son from his first marriage, Indio Falconer Downey.

Robert was in the process of divorcing his first wife, Deborah Falconer, when he met Susan on set nearly two decades ago.

She recalled thinking the “Chaplin” star was “weird” at first due to his eccentric nature. There weren’t any initial sparks between the pair.

“We were up in Montreal prepping for “Gothika,” and we had lunch with the director and Halle Berry,” she told “The Hollywood Reporter” in 2014. “Everybody else ordered Japanese, but Robert told us how oatmeal was the ‘superfood.’

“He brought his own packets of oatmeal to have at lunch. And he had this box of various herbs and stuff. And then he started doing these yoga moves. I mean, he was interesting but weird.”

She told Harper’s Bazaar that her feelings began to change one day while they were casually working out on treadmills with a regular group from the production. 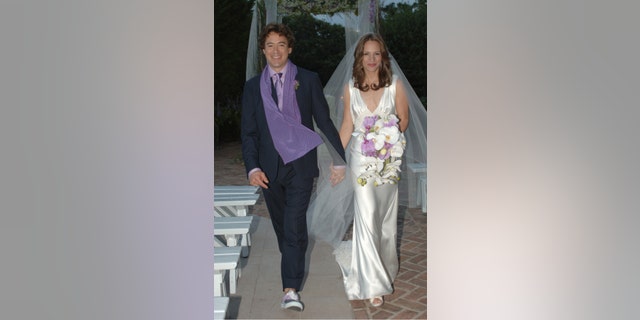 Robert Downey Jr. and Susan Levin married during a Jewish ceremony in New York. They now have two children and work together on an entertainment company called Team Downey.
(Julie Skarratt)

“Robert goes, ‘Levin (her maiden name), you wanna go to dinner?’ and I said, ‘Eh, I’ll grab something to eat,’ so we agreed to go change and meet in the lobby,” she said. “And as he walked down the stairs toward me, I remember looking up at him and suddenly thinking, He’s really cute.”

They’ve since worked on a number of projects together, including “Kiss Kiss Bang Bang,” “Sherlock Holmes,” “The Judge” and “Dolittle,” in addition to creating their own entertainment company, Team Downey.