In a remote region in the north of Romania, there is a remarkable mixture of tradition and wealth. Residents of the Oaș region have been labouring for years in the west so that back home they can build magnificent houses and drive expensive cars. Dressed in the latest Paris fashions as well as old folk costumes, they organise opulent weddings worth tens of thousands of pounds, where guests dance among dry ice and eat select delicacies, with everything recorded by a team of photographers.

For 11 months of the year they work in western Europe, but in mid-August they return to their native villages in the hills of northern Romania, near the border with Hungary and Ukraine. “All year they work hard, save their money, they don’t take vacations, but at home they want to show off,” says Claudiu Bud. He has worked in Spain and England but has returned home to run the Enigma bar in Negrești-Oaș, the region’s capital, population 12,000. “People here have always been hard-working and able to make money,” he says, surrounded by bottles of expensive single-malt whiskies. 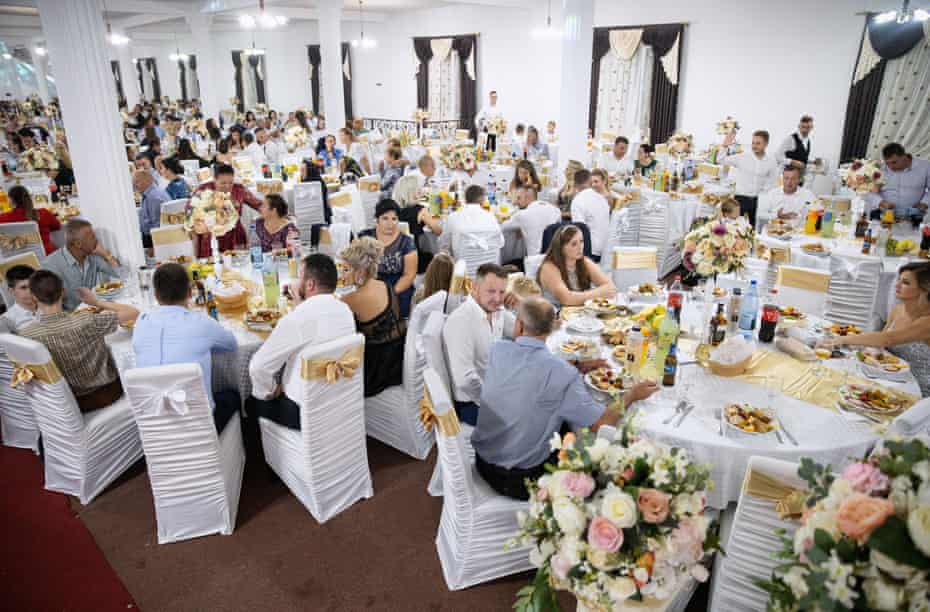 Weddings in Oaș are attended by hundreds, sometimes even 1,000 people, and it is important that no expense is spared. Stretch limos are fully booked shuttling between villages; cosmeticians and hairdressers in beauty salons work until exhaustion; and one suspects that cooks sleep by their stoves and ovens, flower shops make endless bouquets, and musicians play every night until dawn. Everything must be the best so that guests leave satisfied. And I was one of them.

Maria Cont slices off a chunk of yellow butter that has softened nicely in the noontime sun, and carefully massages it into Andreea Avram’s hair. Preparations for her wedding to Florian Mois are beginning, accompanied by the wild cadences of Romanian folk songs. It will take four hours to braid her traditional hairdo. Tomorrow Avram will be sitting on a podium at the head of a long table, and the eyes of 400 guests will be fixed upon her. Weddings in the Romanian region of Oaș are a serious affair, and usually take place twice. “This year we’ll have a traditional wedding in folk costumes, but next year we’ll put on a modern wedding, which will be attended by many more people,” says Avram. 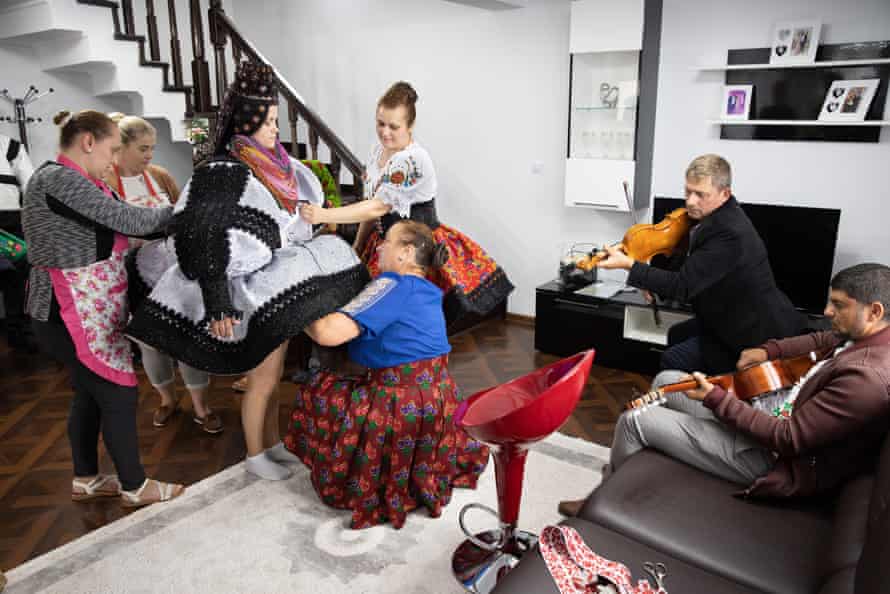 Maria Cont enjoys special status in the village of Racsa. “I learned how to prepare brides from my mother and grandmother, and nobody else knows how to do it,” she says as she braids locks of hair into something resembling elephant ears. She also owns accessories such as dozens of strings with multi-coloured beads, a fake bun, and decorated ribbons that will be sewn to the hairdo later. “How will she sleep so that she doesn’t damage this little work of art?” I wonder, and Avram’s mother laughs: “She’ll have to think of something, it’s her first wedding.”

The Conts’ house perches on a hill overlooking the village, and beyond the trees there is an amazing view of what seems to be the entirety of Oaș, to the hills marking the Ukrainian border. 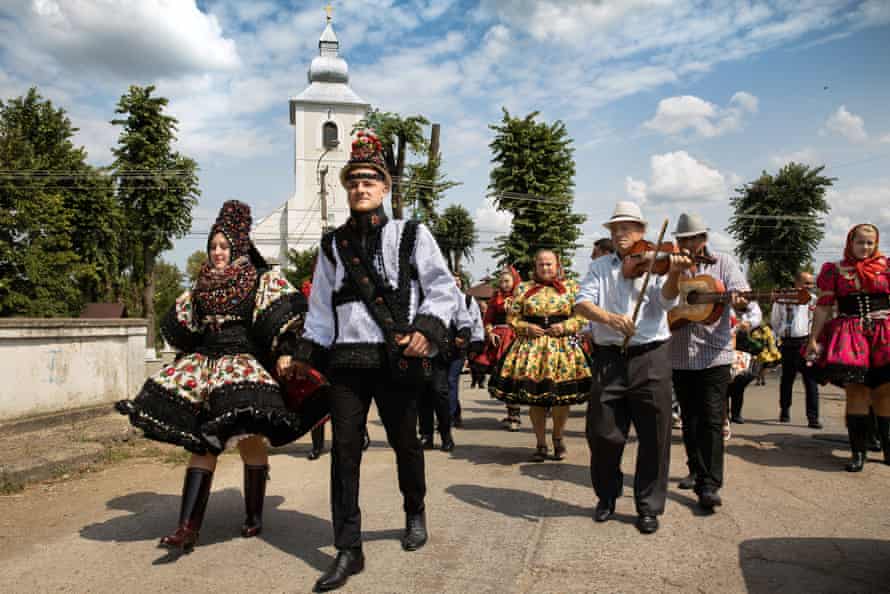 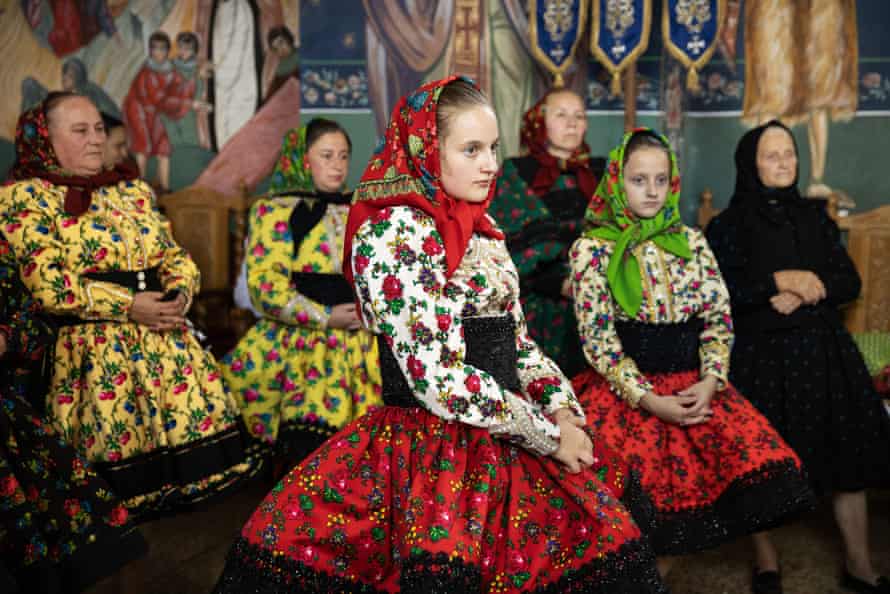 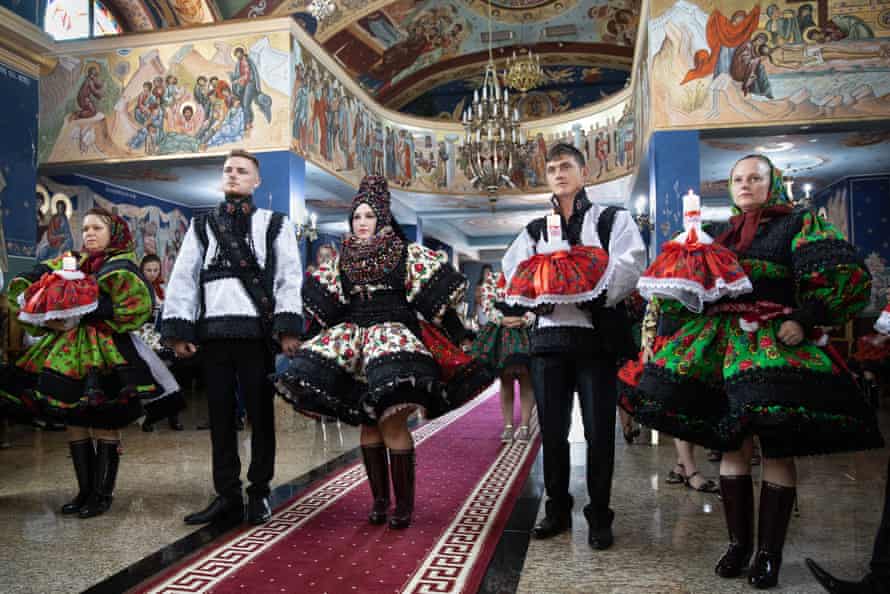 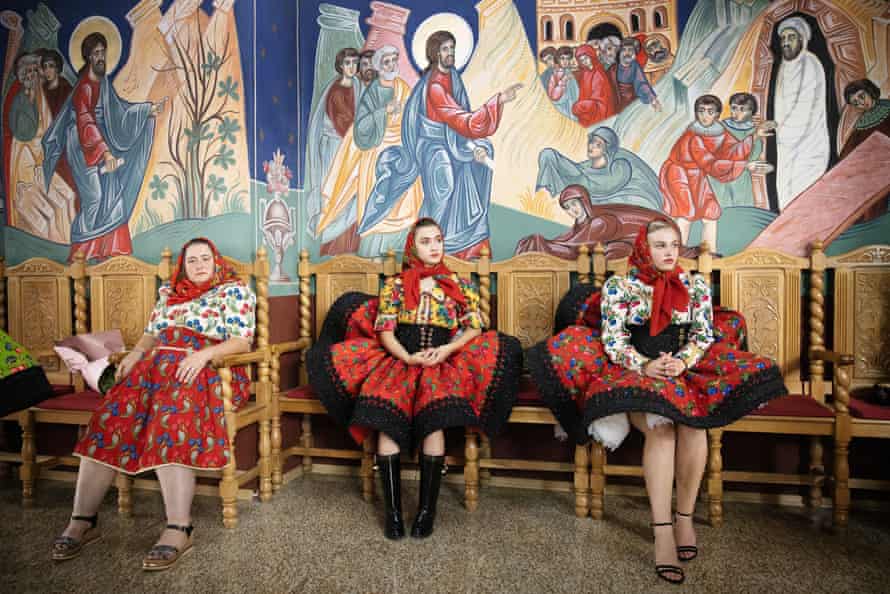 Where did the locals’ wealth come from? “Even back in communist times they would travel to the south of the country in the summer for seasonal farm work or to paint high-voltage towers. They felled deep forests that had to make way for fields when communist dictator Ceaușescu wanted to make Romania the breadbasket of Europe. As soon as communism fell, they went west to work,” says Bud in his Enigma bar. 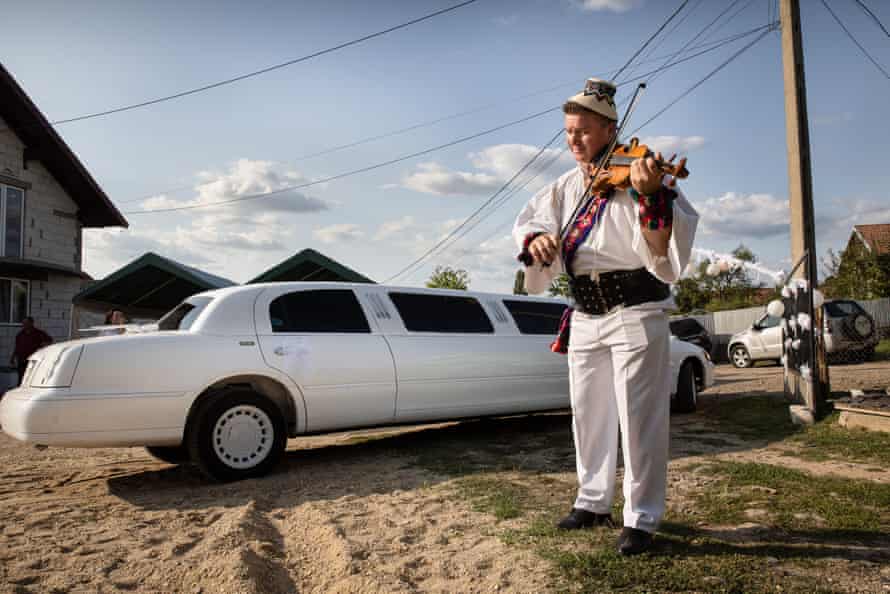 In the beginning they may not have known any foreign languages, but they didn’t mind labouring from dawn to dusk, doing work at which others turned up their noses. They slept in abandoned houses or crowded together in miniature flats in the worst neighbourhoods, and they saved. Some became successful and started their own companies. When they had saved enough money, they began building houses back home in their villages, which are more like palaces, but ones in which nobody lives for most of the year. They are being constantly rebuilt and improved. There’s a saying in Oaș: “If my neighbour builds a three-storey house, mine has to have four.” 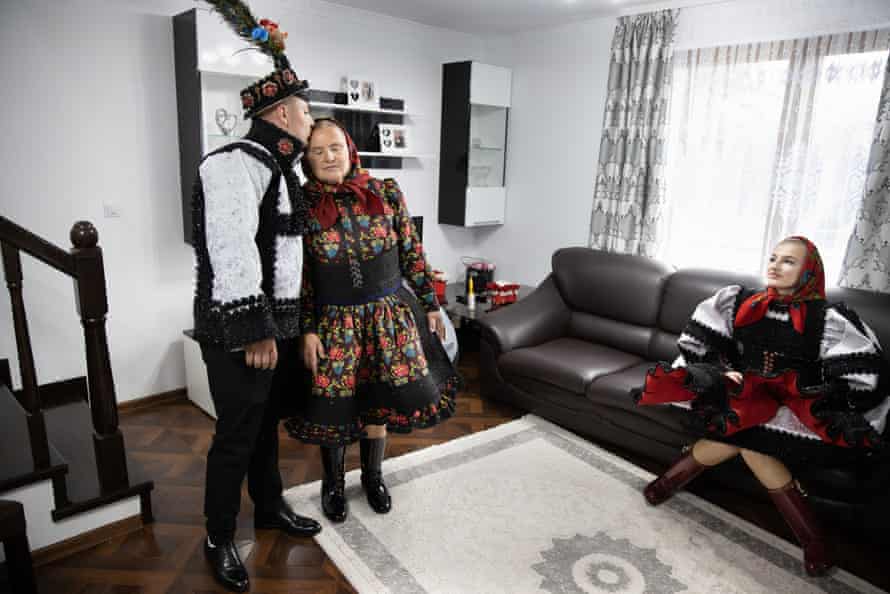 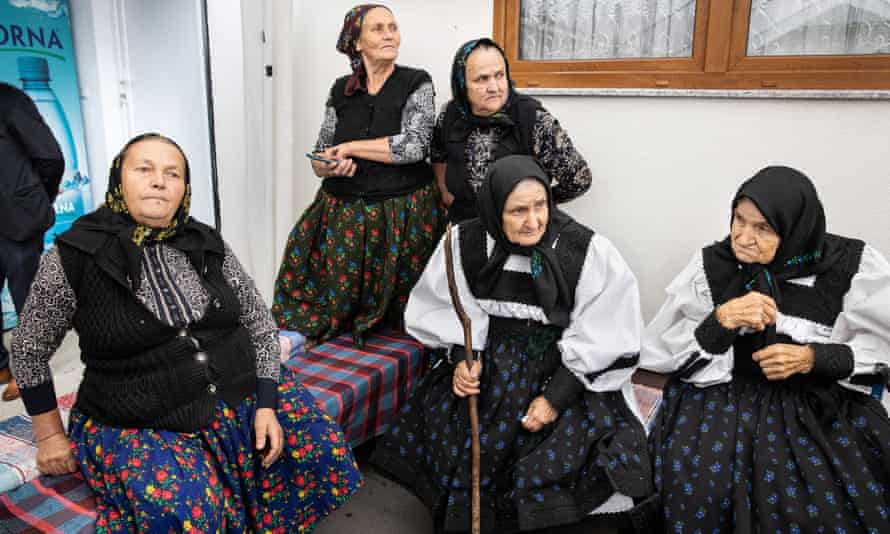 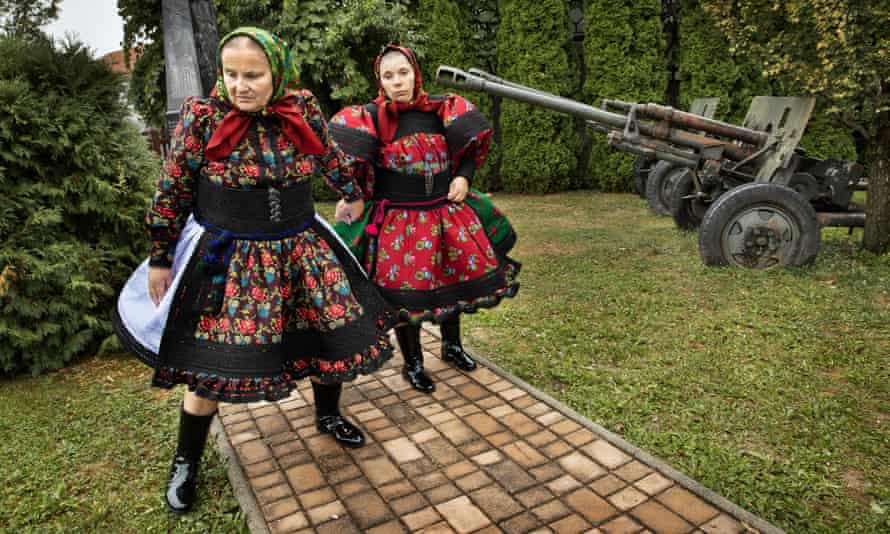 In summer you can encounter Porsches, Maseratis or Mercedes on country roads in Oaș in numbers that dwarf even those in rich neighbourhoods of Munich or London. Often I see a young man or woman behind the wheel, with a new driving licence, if they even have one. “That’s the latest trend, they’ve started competing in who will buy their kids the most powerful and expensive car,” says Bud, shaking his head.

A complicated hairdo is slowly growing on Avram’s head. Her bridesmaids, who are dressed in folk costumes, have come to support her. One of them, 15-year-old Denisa Lup, watches what lies in store for her one day. Her parents have been working in England for the past 20 years, and because they were too busy working to take care of her, she lived with her grandfather until the age of 10. During this year’s summer holidays she has already attended 15 weddings, and next year she is invited to at least 20. 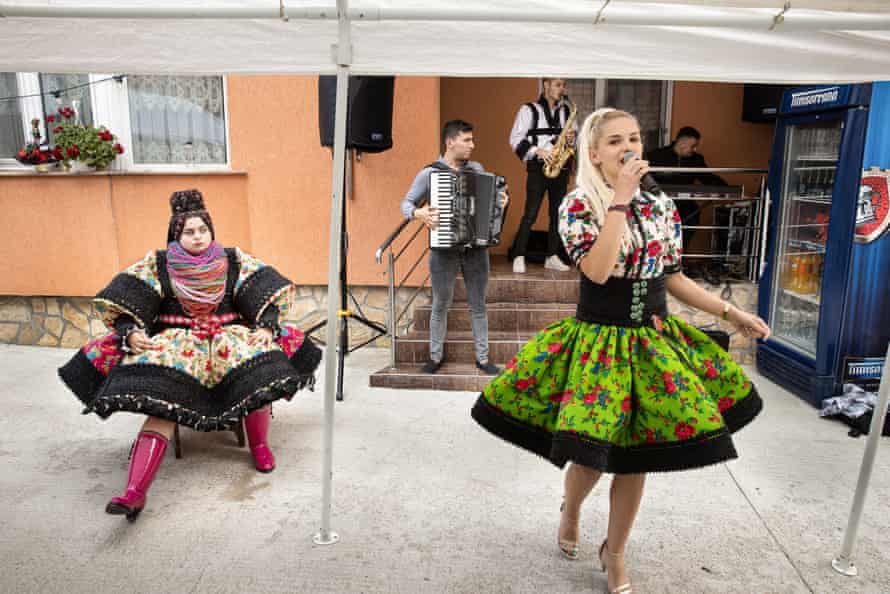 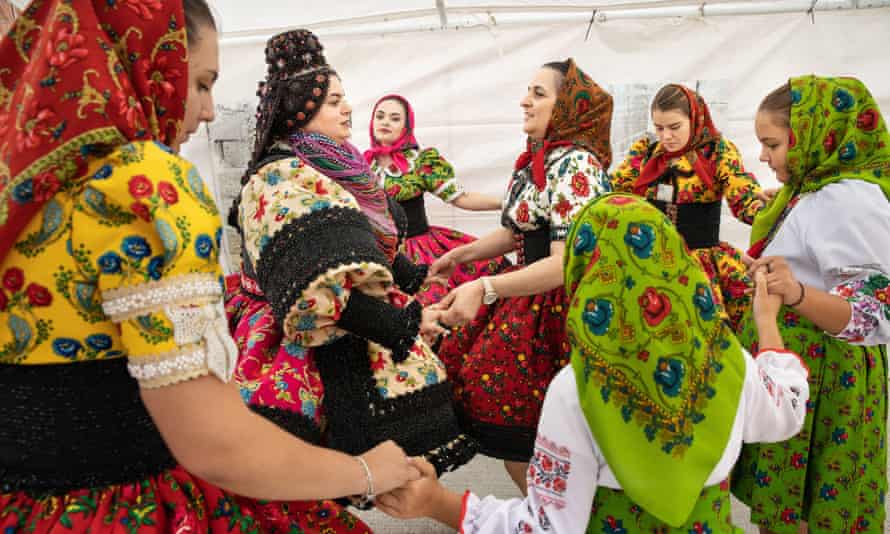 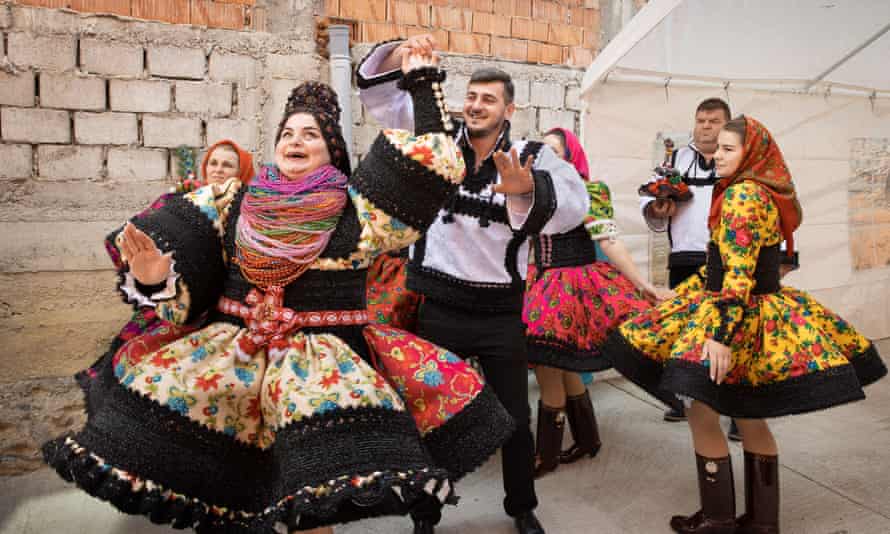 Remus Tiplea is a renowned money changer in Oaș, and in the summer, thanks to workers returning home from abroad and their conspicuous spending, he reaps a windfall. In 2009 he began taking photos and he has already published several books on traditions and rituals in Oaș.

“Today’s wedding in the village of Camarzana will be fairly large, for about a thousand people,” he says in an attempt to prepare me for the spectacle. But such an event is much more than one photographer could handle, and so we set off in a convoy of cars – the small team, headed by Tiplea, includes two videographers and another photographer. Two or three hundred people are invited to the average wedding in Oaș, more than 1,500 to large ones. 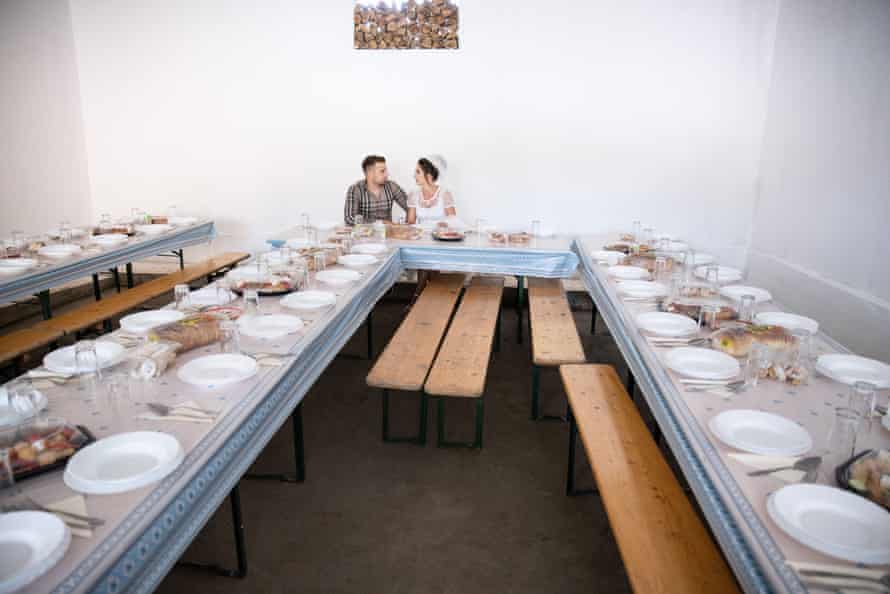 In Camarzana, everything is being readied in the yard of the groom’s parents’ house for the arrival of the wedding guests. Two bands have been invited – traditional Gypsies with guitars and violins, and a female singer with a small band. Rows of champagne glasses are arranged on the table, and the champagne is being kept cold in a refrigerated van parked on the street. The glasses are hand-painted with the names of the wedding guests, and the glasses for the bride and groom have a relatively faithful rendering of them locked in an embrace. 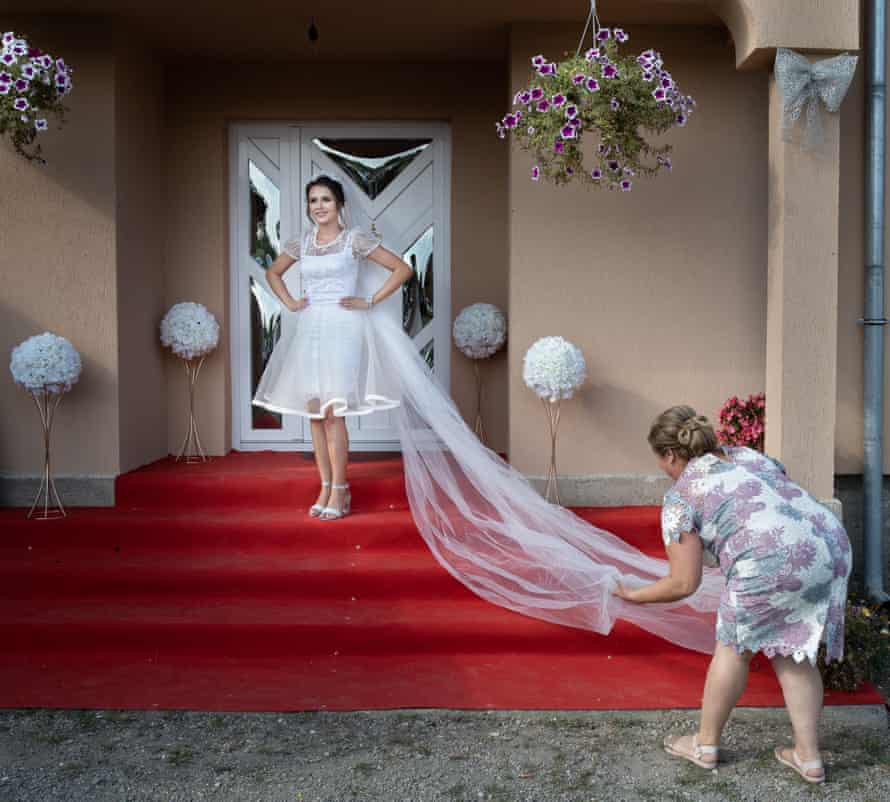 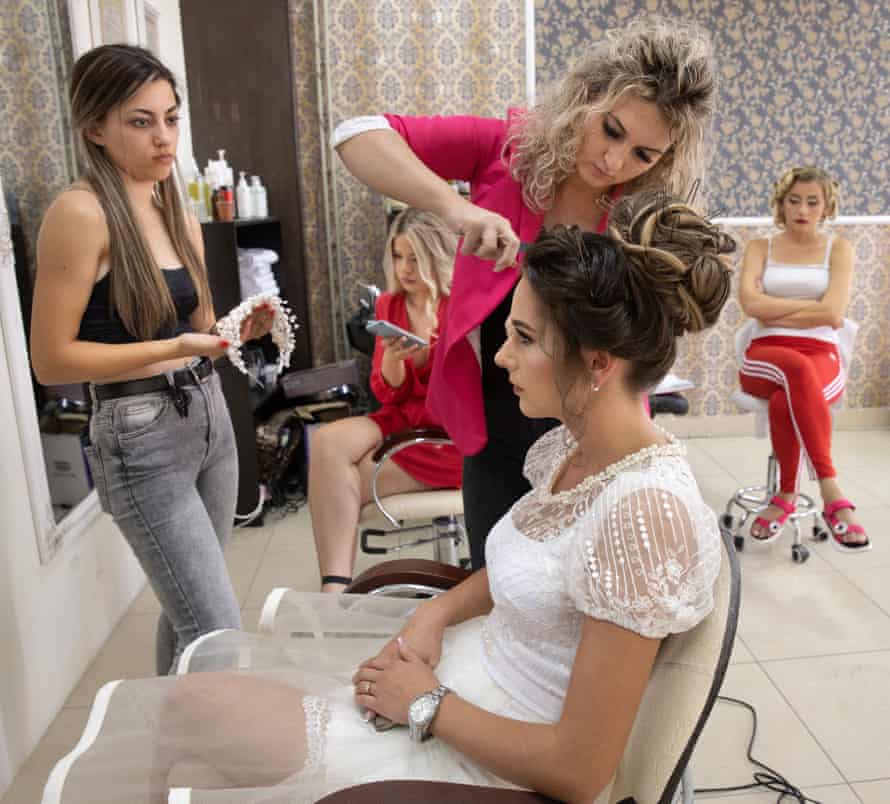 They’ve barely started bringing out platters of delicacies, and we’re already on our way to the bride’s house. I look back wistfully at the meatballs, mini-schnitzels, roulades and salamis, but we’re not going far: the bride and groom, Jesica Monica Bura and Grigore Hop-Hotcas grew up almost within sight of each other. 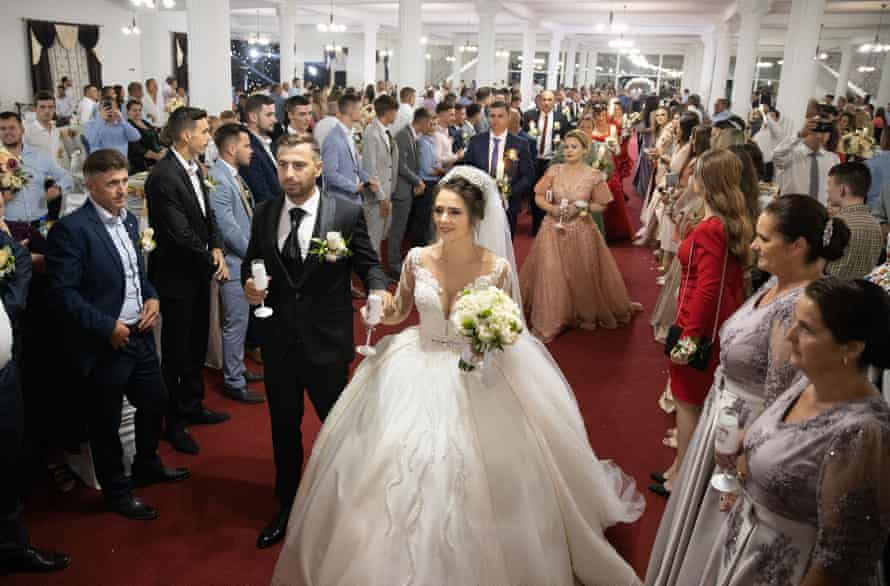 The bride’s family can’t allow itself to be put to shame either, and here too the tables are groaning under various delicacies – but there’s one thing that’s different about the tables at the groom’s house. “Notice that there’s no alcohol here,” says Claudia Simon, a videographer. “The bride’s family belongs to the Pentecostal movement, while the groom’s family is Orthodox.” But religious differences pose no problem here – the wedding will be in the Orthodox church that towers over the village. 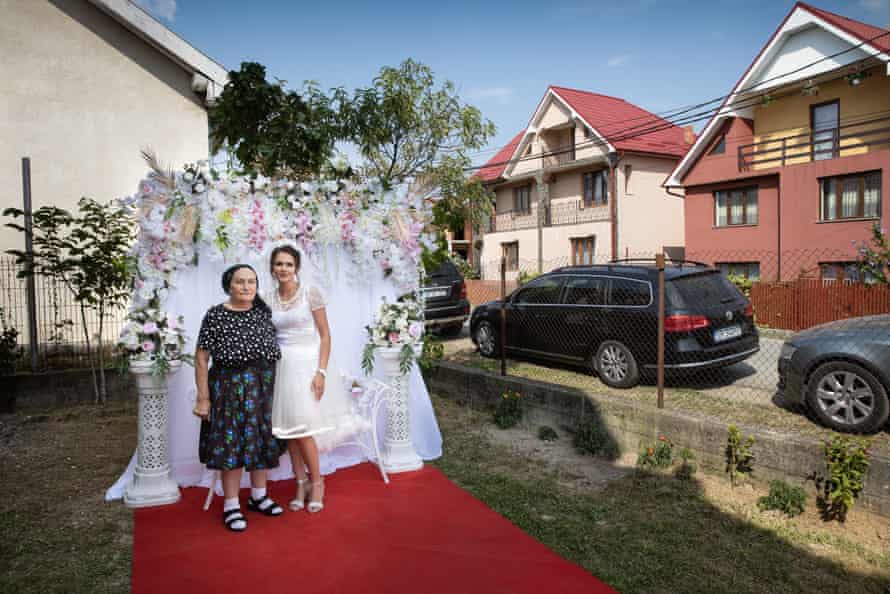 Simon is from Zalau, about 100 miles away. “During a year I shoot roughly 30 weddings, but here in Oaș I do at most two – I don’t think I could survive more. Elsewhere in Romania people are happy to have the wedding edited down to a short film, but in Oaș we make roughly five-hour movies for them.”

Everything must be recorded meticulously. A small flowered background has been set up in the garden, where the bride is having her picture taken with everyone. When there aren’t any more people to take pictures with, Tiplea, his team and I finally attack the platters of delicacies, but after the first few bites we’re called into the house. Standing in the corner of the living room is another wedding dress, and the bride with her bridesmaids, wearing housecoats made expressly for the wedding, are already frolicking in the bedroom with balloons. The scene has been carefully staged for the sole benefit of the photographers and videographers.

Dressed in her over-the-top wedding dress, the bride returns to the garden to once again have pictures taken with everyone. Simon estimates this dress cost about €5,000. The wedding guests hand over envelopes with gifts. “The average wedding costs approximately €50,000, but every guest has to bring a gift from their family,” Tiplea says later. The amount depends on how well you know the bride and groom. “The amount collected is always more than the wedding costs.” 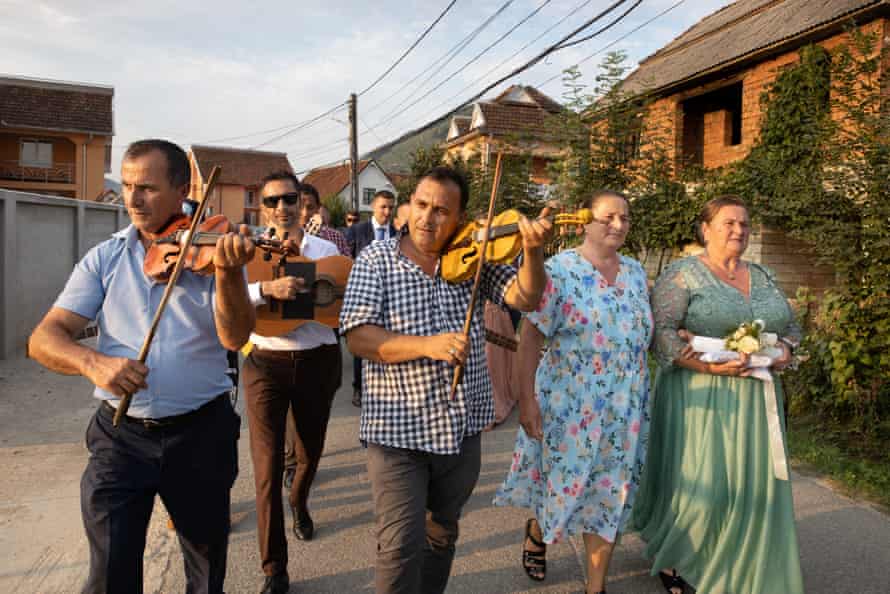 After the ceremony, when it’s almost dark, we drive to the wedding hall at the edge of Camarzana. The hall is so large that you can barely see from one end to the next. The newlyweds are already dancing and the singer is putting his all into a romantic song. “This is going to be a long night,” says Tiplea. At his last wedding he didn’t finish taking pictures until 6am. 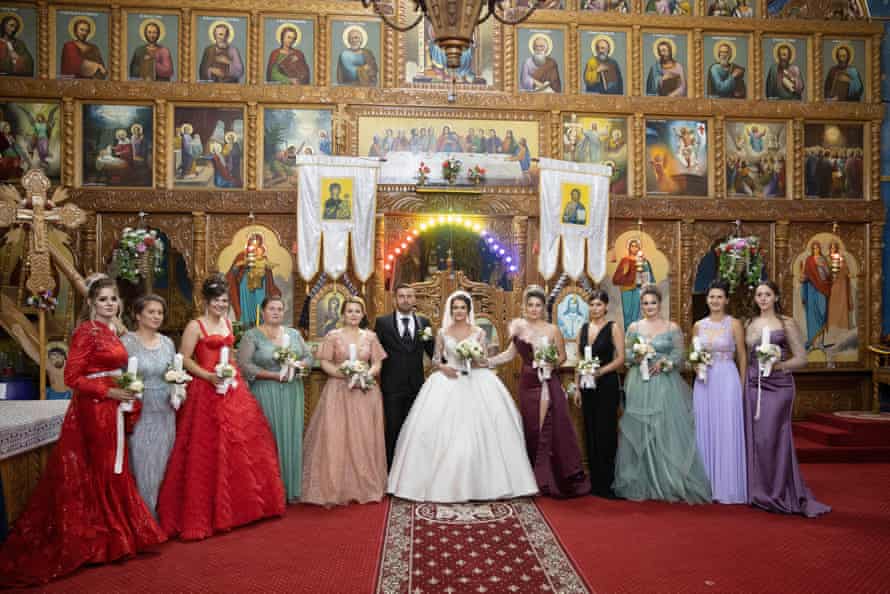 Over the course of seven days I attended six weddings in Oaș. I’m exhausted and can’t imagine attending 20 during a few weeks, and then returning rested to Paris or London to labour all year on construction sites. 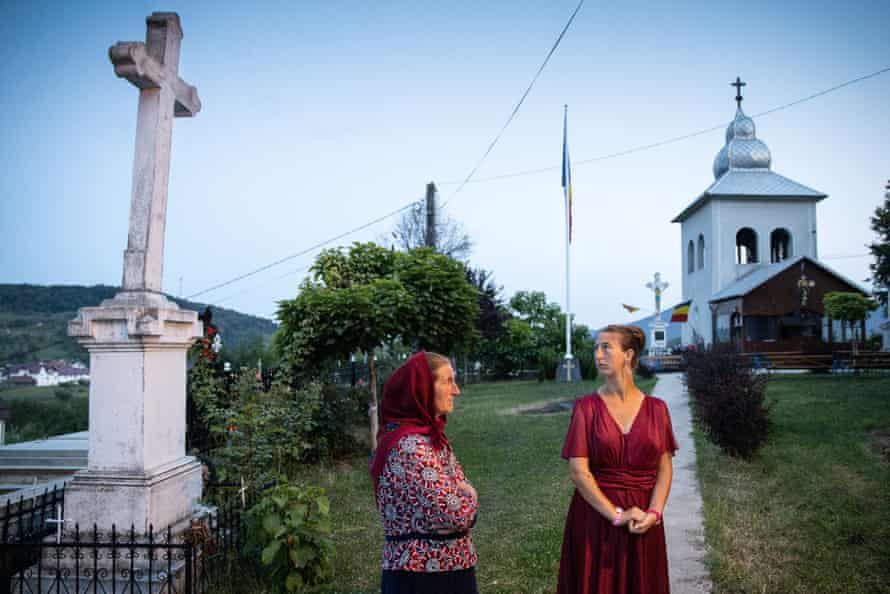 “You can expect to wait at least an hour at the border,” says Tiplea, who has come to say goodbye. “Everyone is leaving and we’ll have some peace and quiet again. Seventy per cent of the locals work abroad. Most of the year you don’t even have anyone to talk to here.”