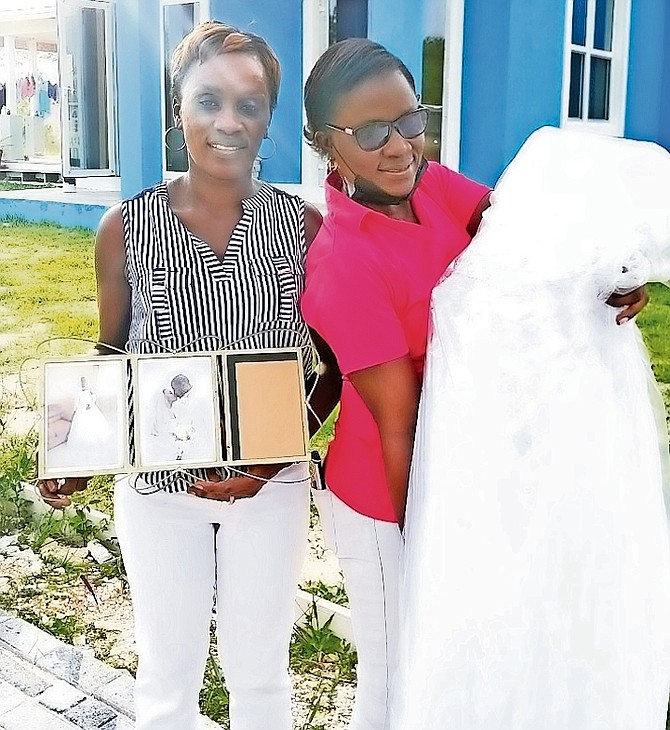 WHEN Hurricane Dorian battered Grand Bahama, East End resident Maydon Cooper Swann, left,
found her wedding dress after the storm covered in dirt, torn and tattered. Yesterday, she was
reunited with the dress, restored and, as she said, “snow white”.

EAST End resident Maydon Cooper Swann could not believe her eyes when she was finally reunited with her fully restored wedding dress that was found battered in dirt after Hurricane Dorian destroyed her home two years ago.

“It is snow white – it has been completely restored to its original state,” said Mrs Swann. “I am so overwhelmed with joy.”

Mrs Swann lost everything in the 2019 storm. She never dreamed the dress could be restored.

“I never dreamed it would look like that because that dress was torn, tattered, and battered when we found it in a pile of dirt,” she told The Tribune. “My sister noticed it while we were walking around the yard. She said, ‘Maydon that looks like your dress,’ and we started pulling it from under the debris.” 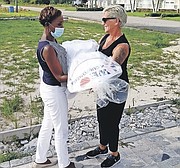 Dusty Adinolfe and Joy Kairalla, of Project Bahamas Strong, along with Andre Spence, returned to Freeport to deliver the fully restored wedding dress – a promise they made two years ago when Mrs Swann entrusted them with it.

“We were building bungalows to house people and her mother was chosen as one of the people for a bungalow and as we were walking the property we heard a little bit of a scream and she (Mrs Swann) picked up this wedding dress out of the mud and started crying, and I could not believe she found it.

“And we just kind of sat there and were in awe and decided if there was any way at all we could restore this we would really love to because it was one thing found on the property after everything was lost. We thought it was something to at least attempt to do for her,” said Ms Adinolfe.

Ms Kairalla said they are just happy they were able to help. “We were able to touch so many lives and help so many people and the dress is, just for me, a representation of everything being wrapped up into something that was salvageable and meaningful. It’s just so touching,” she said.

Mrs Swann – who was married on June 20, 2009 – still vividly remembers the day she first saw the wedding dress in David’s Bridal.

She said that Ms Adinolfe told her about a friend in Canada who could restore the dress.

“When she presented the dress to me, I was in awe. I learned that they contacted David Bridal. The dress was discontinued and they did not have the pattern, but they were able to send them the beads and accessories for the dress,” Mrs Swann said.

Ms Adinolfe and Ms Kairalla tried to deliver the dress to Mrs Swann during the summer, but were not able to because of the travel ban and shut down following the COVID-19 pandemic.

Mrs Swann said that the return of the dress gives her hope. She said that she is still trying to recover from the devastating losses the family experienced during the storm.

She lost a sister and her two nephews in High Rock during the storm. Her home was also destroyed and all the contents, including the wedding dress.

“The roof was blown off and we made lots of trips and did not find it. I thought it was washed out to sea. It has a very sentimental value to me, and I never thought we would find the dress.”

Mrs Swann said her mother is still without a house and losing three relatives was a painful loss.

“High Rock suffered worse than any other settlement in the east. It was decimated. We never dreamed this would happen. We never witnessed anything like this, but we have to deal with it through the pain.”

Mrs Swann said when she learned that her sister and two nephews were missing, she did not believe it.

“I just brushed it off and said she probably went to McLean’s Town by my aunt. So, the next day…we all caught a dump truck from COB to the break in the road at the Lucayan National Park, and we had to walk from there to High Rock. And I call it a journey to hell. When we got there… it was total destruction. All I could do was fall to my knees, and we started running around the yard calling for my sister and nephews. We were turning up rocks just looking for them,” she said.