This week’s episode of “Game of Thrones” spinoff series “House of the Dragon,” features child violence, a fake out death plot twist that’s a major change from the book, a secret wedding, and sex on the beach.

Spoilers ahead for episode 7 of “House of the Dragon, which aired Sunday, Oct 2 on HBO.

Everyone is gathered at Driftmark (Corlys’ castle) for the funeral of his daughter — Daemon’s wife who died last episode. Princess Rhaenyra (now played by Emma D’Arcy instead of Milly Alcock) reconnects with her uncle Daemon for the first time since the 10-year time jump. Apparently, he’s not much of a grieving widower, since he has sex on the beach with his niece immediately after his wife’s funeral.

Prince Aemond (the second son of King Viserys and Queen Alicent) is also on the beach. No, he’s not peeping on his relatives getting it on. He’s claiming Vhagar, the oldest and largest dragon who used to belong to Daemon’s late wife.

The show hasn’t explained it clearly, but dragons and their riders have special bonds in this world, and they only ever bond to one living person at a time. So, now that Laena is dead, the dragon will be Aemond’s from now on. This is a big deal, because Aemond seems like a little twerp — he later tries to brain one of Rhaenyras’ sons with a rock, punches Daemon’s daughters, and taunts Rhaenyra’s sons about their dad dying in a fire. This isn’t a nice kid, and he now has what amounts to the most powerful weapon in Westeros. So, this dragon development is bad news!

Daemon’s daughters are furious that Aemond “stole” their late mom’s dragon. The kids all get into a violent fight, and it ends with Rhaenyra’s son stabbing Aemond in the eye, in self-defense.

Naturally, this causes chaos. The adults convene in the hall and accusations fly about whose fault it is that one of the princes is now a cyclops. 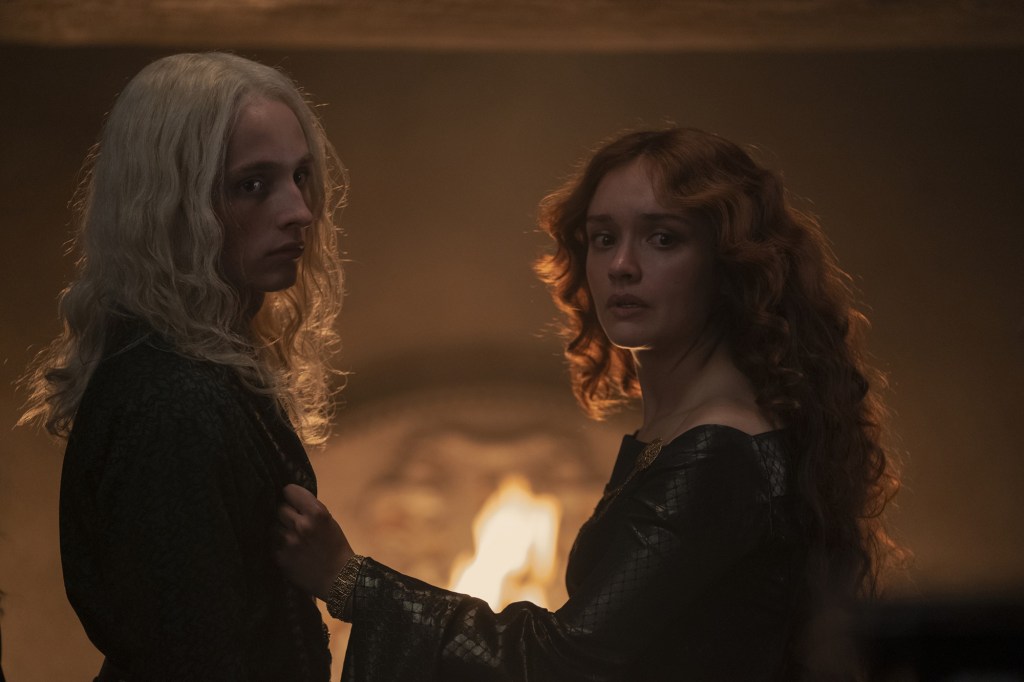 Alicent wants to solve this issue by literally taking an eye for an eye from Rhaenyra’s son. Because nothing says “The audience should root for this character” like willingness to harm a child! Later, Alicent’s dad Otto Hightower (who has returned to his position as the Hand of the King), praises his daughter for her viciousness. He also comments that Aemond getting the dragon Vhagar for “our side” is worth the price he paid for it, in losing an eye.

Even with all the dragon developments and child violence, the drama in this episode isn’t over yet. Rhaenyra sees how hardcore Alicent is, and she knows that many people in the kingdom think that Alicent’s son should get the throne after the king dies, instead of Rhaenyra. You know who would be a good ally to have on her side? Her unhinged uncle who has no qualms about murder. So, Rhaenyra and Daemon get married in a secret wedding involving smearing blood on each other’s faces, as one does (it’s an ancient Valyrian tradition that their ancestors did).

These two don’t care that it’s incest. In fact, that’s part of the appeal, since there are rumors that Rhaenyra’s kids are illegitimate. Marrying a relative in a classic Targaryen move will make Rhaenyra’s claim to the throne seem stronger, she thinks. 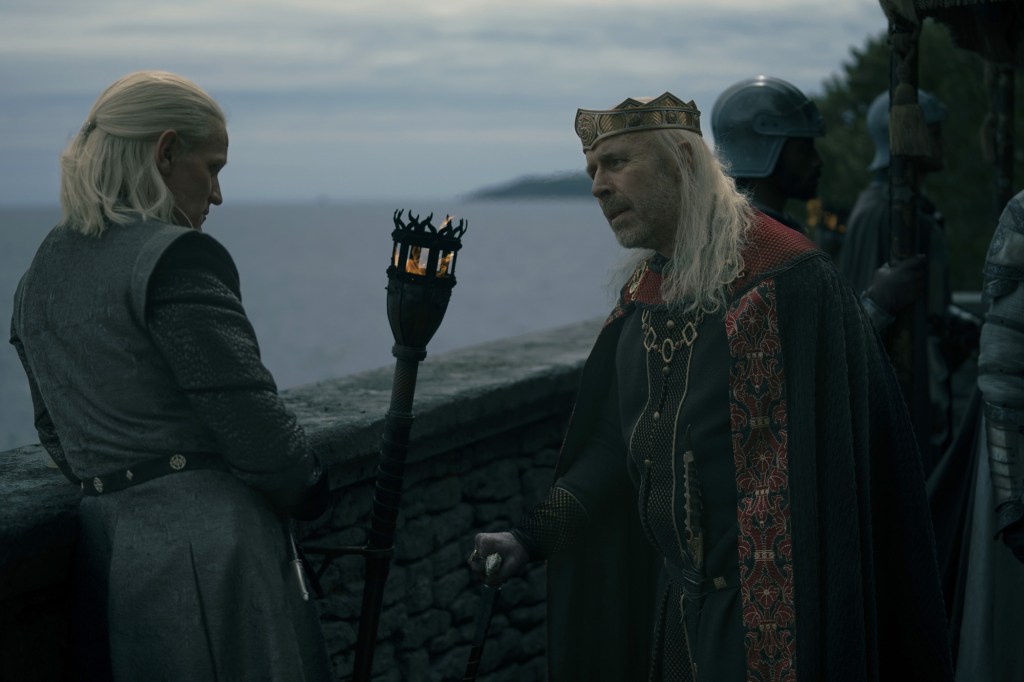 But one wrench in this wedding plan is that Rhaenyra is already married. Sure, her husband Laenor is gay and they have an open relationship, but he’s still her husband.

Spoiler alert for George R. R. Martin’s, “Fire & Blood,” the book on which the show is based. In the source material, Laenor simply dies, and it’s assumed that Daemon got him out of the way so that he could marry Rhaenyra. In a big change, the show makes it seem like Daemon and Rhaenyra arrange for Laenor to be killed. But in a twist, it’s revealed that they faked his death and he’s going off to live a new life abroad in blissful obscurity with his boyfriend.

In the book, it’s a cruel development that both Laenor and his sister Laena both die, in order to get out of the way so that Daemon and Rhaenyra can finally be together. It’s also notable that Westeros is especially brutal to LGBTQ+ characters, slaying Laenor’s boyfriend Joffrey in the fifth episode (and don’t forget the fates of Loras, Renley, or Oberyn on “Game of Thrones”). So, Laenor is one seemingly dead gay character who’s given a better fate onscreen.

Maybe this means that the show might spare other characters who are marked for death in this bloody tale.

“House of the Dragon” airs Sundays at 9 p.m on HBO.