Warning: Spoilers ahead! Stop reading here if you don’t want to know what happens during Selling Sunset season 5.

On Selling Sunset, the houses are big—but the drama is (somehow) even bigger. While the ladies at The Oppenheim Group have their fair share of alliances and feuds, season 5 brought some major developments.

New hire Chelsea Lazkani bonded with Christine Quinn before quickly making friends with the rest of the office. But many of the show’s stars were still wary of getting too close with Christine, including Heather Rae El Moussa.

Heather and Christine were close years before the show first dropped on Netflix. But over the past few seasons, their relationship crumbled faster than a listing without a buyer. And, it all seemed to come to a head during one fateful moment at Heather’s bridal shower (yep, that one).

Heather recently sat down with Women’s Health to explain exactly how she felt about Christine’s olive branch:

First, a quick recap: Christine didn’t actually attend the event. (She wasn’t invited.) Over lunch, Heather and the other ladies opened plenty of presents while celebrating the bride’s upcoming nuptials to HGTV star Tarek El Moussa.

During the shower, Heather was informed that another delivery had arrived outside the venue. “As I was walking out, I was like, ‘Okay, there has got to be something from Tarek,'” Heather tells Women’s Health. “What else would it be?” 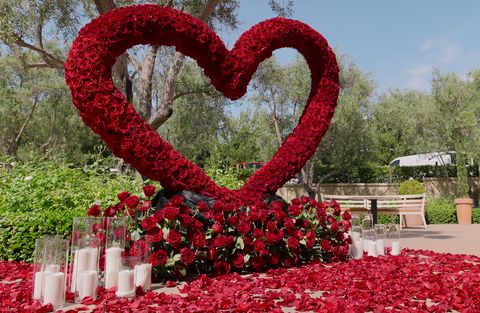 But once she saw the *massive* tower of flowers outside the venue, “I’m like, ‘What the hell?’ It’s not my colors, not colors I would choose, I’m like, ‘What is this?'” Heather says. When she read the note and found out the arrangement was from Christine, she says she wasn’t sure how to react.

“I never got a personal text from her, hadn’t heard anything from her,” Heather continues. “We obviously filmed my bridal shower for the show, which she knew. So in that moment, I didn’t want to just jump to conclusions like, ‘Oh, she’s doing this just for attention.'”

But the other ladies started wondering why Christine would send something so… huge, especially since she and Heather hadn’t spoken throughout the entire wedding planning process. Heather began to realize that “it did take away from my party,” since the festivities had to stop so everyone could go outside and take a peek.

In another episode, Heather sits down with Christine to hear her side of the story. “I said, ‘I hope that that was a genuine gesture,'” Heather tells WH. “But it’s really hard for me to believe things that she says at this point. So I never know what’s the truth and what’s not the truth.”

As for the gift she really wanted from Christine? “Honestly just a message,” Heather says. “Something congratulating me, and something personal, not something for the cameras.”

“She says she wants to be my friend and misses me, but then I hear nothing from her off-camera. So you know, even if it was just a text message, that would have meant something to me.”

Here’s hoping these two can patch things up during the upcoming season 5 reunion episode.