“Normally, I would ask for payment beforehand, but since it was a family friend, they asked if they could just pay me at the reception and I told them yes,” the 18-year-old tells Reddit’s ‘Am I The A–hole’ thread.

The church was a hour’s drive from her home and she showed the bride the navy dress she was planning to wear at the event when they met to go over the music she wanted and again at the rehearsal.

‘They asked if they could just pay me at the reception and I told them yes.’ (Getty Images/iStockphoto)

She describes the dress as “just navy blue with long sleeves and floor length, but it’s surprisingly pretty”.

“I got to the venue about 4 hours early, so my harp would have time to acclimate to the room,” she explains. “When I got there, the bride’s mother came to give me my corsage, and when she saw me, she demanded I change my dress.”

READ MORE: Bono says finding out he had a secret half-brother from his father’s affair helped him come to terms with their strained relationship 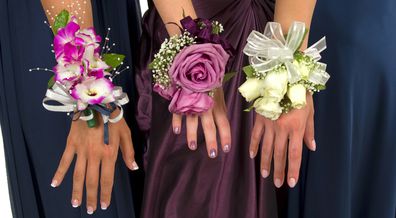 ‘When I got there, the bride’s mother came to give me my corsage.’ (Getty Images/iStockphoto)

She says her initial reaction was to laugh, thinking it was a joke but she quickly realised the bride’s mother was not joking.

“I asked what was wrong with it and she said that the bride went with a non-traditional dress that was also navy blue,” the harp player explains. “I panicked a little, because this is her wedding and I felt really bad, but she and her groom had approved it twice.

“I told the mother, and she asked if I had any other colour I could change into,” she continues. “I don’t bring extra dresses unless my dress somehow doesn’t get approved beforehand, so I didn’t. She then told me to go to the bridal shop 20 minutes away, and buy a new dress. I refused, because those dresses would cost about what I was getting paid for this wedding, and I told her I couldn’t afford it. I felt bad, but she begrudgingly walked away.” 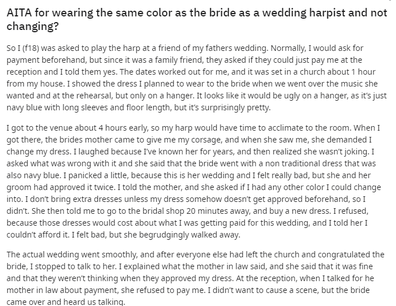 The wedding went ahead without any other incidents. She made sure to talk to the bride before she left, to discuss the situation and make sure everything was okay.

“I explained what the mother-in-law said, and she said that it was fine and that they weren’t thinking when they approved my dress,” the harp player writes.

It was at the reception that things took a turn for the worst.

“At the reception, when I talked to the mother-in-law about payment, she refused to pay me,” the woman explains. “I didn’t want to cause a scene, but the bride came over and heard us talking.

“This time, she was also upset with me and also refused to pay me.” 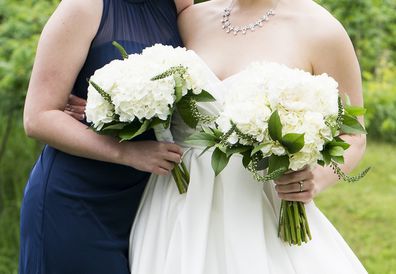 She made sure to talk to the bride following the ceremony, however things later took a turn for the worst. (Getty Images/iStockphoto)

She says she didn’t know what to do and didn’t have anyone at the wedding to back her up.

“A lot of people assume harpists come from a lot of money because of how expensive harps are, but I’ve been renting a harp since 4th grade, and when my teacher passed, we bought it for an amazing deal,” she writes. “I also charge a lot less than most musicians would, but I have a college payment due in a few days and I can’t afford it.

“I got my parents involved when I got home, and my dad talked to his friend (the father of the groom) who was there when they approved the dress, and he got the payment to me. I still feel really bad, but I don’t think there was anything I could have done.”

She asks Reddit followers if she should have “just sucked it up and bought a new dress” and the overwhelming consensus is definitely not.

“Honestly – if brides choose a non-traditional colour aside from white/ivory chance are that someone will be wearing the colour of their dress,” one person writes. “That’s not anyone else’s problem aside from the bride if it’s not explicitly been discussed with the guests.”

One woman who chose to wear a non-traditional wedding dress in the same colour as two of her guests can’t see why it was a big deal.

“Yep. I wore purple and at least two of my guests did as well. But I couldn’t give two sh**s – I was the one at the front exchanging the vows so it was kind of obvious who the bride was,” they say.

One Reddit user suggests they were never planning to pay her and used the dress colour issue as an excuse.

“It kinda sounds like they weren’t really planning on paying her,” they explain. “Most people don’t pay the day of. With everything you have to keep track of on the day of a big event you are hiring live music you have a million other things to worry about and don’t wanna be running around paying people.”

“Lesson here is get paid upfront. No money no music,” adds one Reddit follower.

“And stop undercharging,” adds another.

The most iconic royal wedding dresses of all time