Deciding on a wedding dress can be a difficult task for a bride. Most try on between four and seven gowns before they decide on the perfect one, but in some cases, it can take dozens before a bride is satisfied. They usually have an idea of what they’re looking for though: the style, the shape, the length of the sleeves, how much lace and how many sequins they can handle, how long the train is, and oh yeah, the color. In many western countries, brides choose to wear white on their special day, but who says that’s a requirement?

One bride shared on Reddit that she actually decided to mix up the color palette at her wedding after her soon to be mother-in-law insisted on wearing white. Below, you can read the full story featuring the demanding mother-in-law, and let us know in the comments how you would have reacted in this situation. Then if you’re interested in another Bored Panda story featuring wedding dress drama, be sure to check out this article next.

Image credits: An Min (not the actual photo) 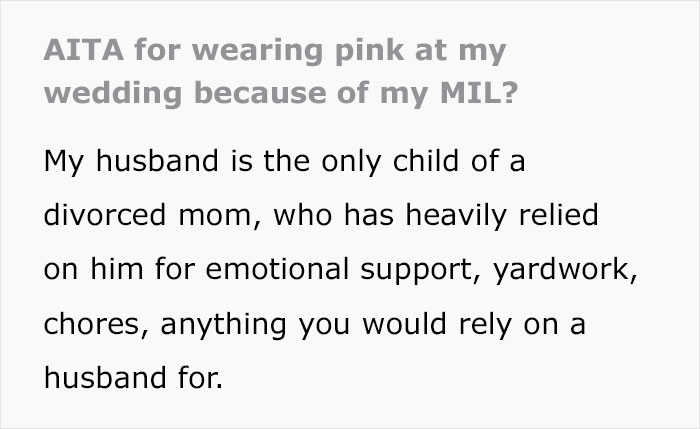 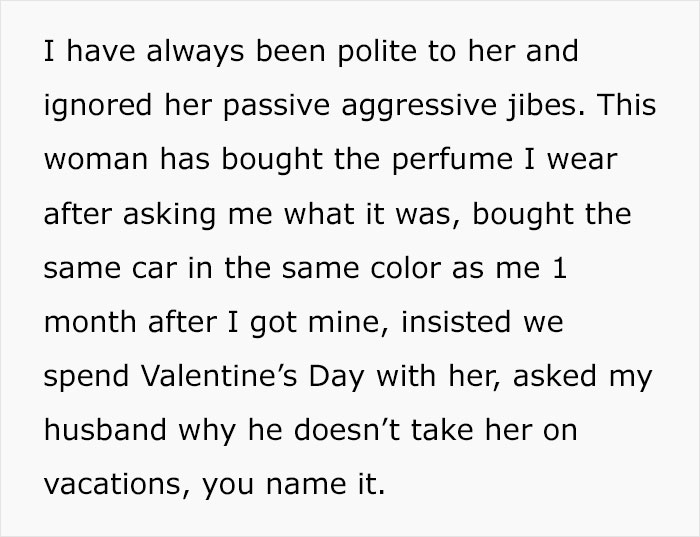 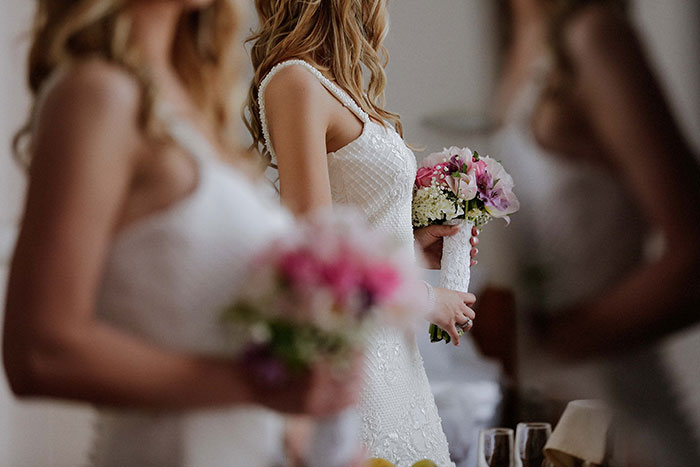 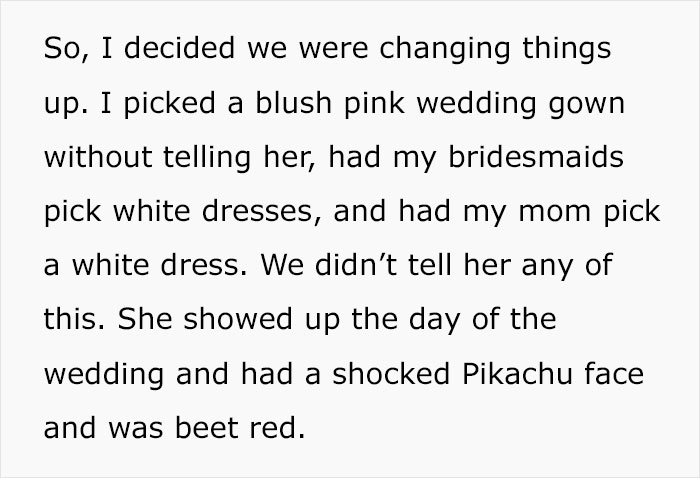 A pink dress sounds absolutely beautiful for a wedding, but I have to admit, I’ve never seen it done before. White dresses have just become the expectation in many western countries, and many women don’t even question it. In the United States, for example, about 83% of brides wore white on their special day in 2018. However, more and more women are becoming creative and deciding they don’t have to go along with tradition, as that number had dropped down from a whopping 92% of American brides in 2017. Whether it was simply due to a preference or a choice to honor their culture, brides are feeling less pressure to wear white just because it’s expected.

A bride should have the choice to wear whatever she wants at her wedding: white, black, pink, gold, red, etc. But the issue in this story is not at all what the bride decided to wear or have her bridal party wear, it is the fact that her mother-in-law demanded on wearing white. If it had been the plan for the bride to wear pink from the get-go, and there had been a conversation about what the mother of the groom was allowed to wear, that would be different. But the groom’s mother insisted on choosing her outfit first, and the bride was expected to simply accommodate her.

It also does not make sense for the mother of the groom to choose her attire first, because, traditionally, she could wear a wide variety of looks. The bride is the one person who has specific expectations of what she will be wearing, and the day is all about her and her partner, so she should set the tone for what everyone will be wearing. Then the mother of the groom could choose an appropriate formal dress or outfit that does not take away from the bride but still looks lovely. There are not strict guidelines on what the mother of the groom can wear, but as The Knot explains on their site, “It’s encouraged to steer clear of wearing white, blush or neutral hues that can look white on camera unless specifically approved by the bride.”

What do you think about this situation? If you are married, we would love to hear what you and/or your lovely bride chose to wear for the occasion and if any drama ensued between family members about what they were allowed to wear as well. Feel free to share your personal wedding stories below, and remember, a wedding is all about celebrating one couple. The rest of us can take a back seat, at least for one day!

Readers have unanimously sided with the bride, saying that the mother-in-law got what she deserved 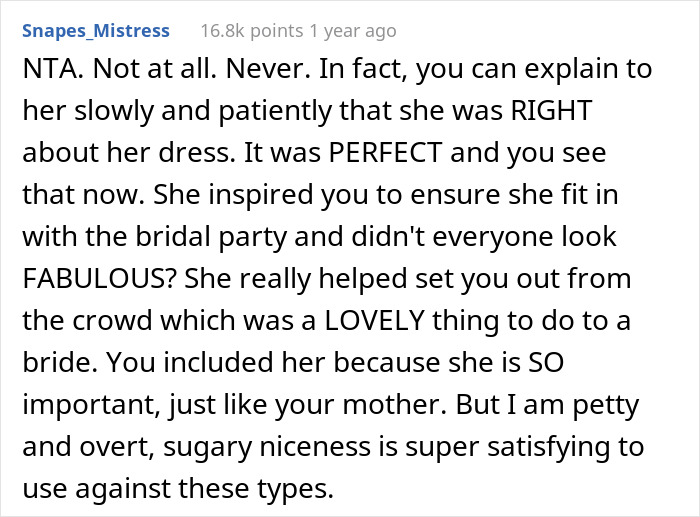 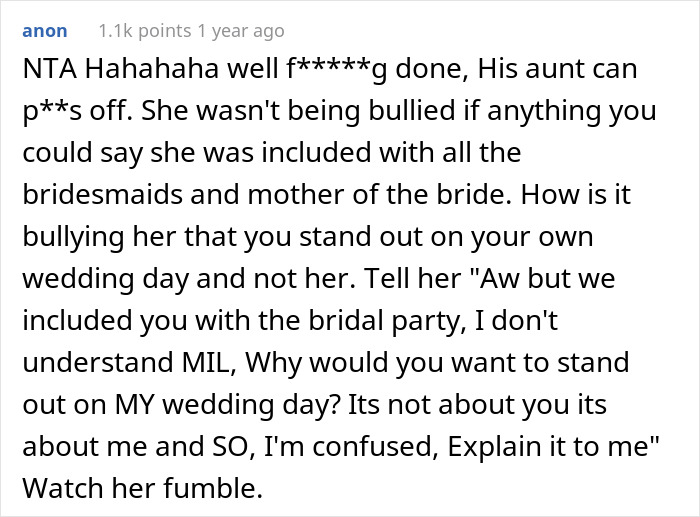 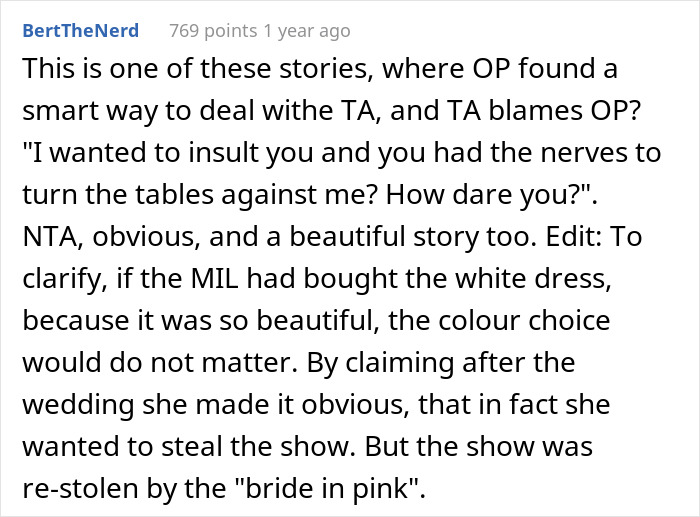 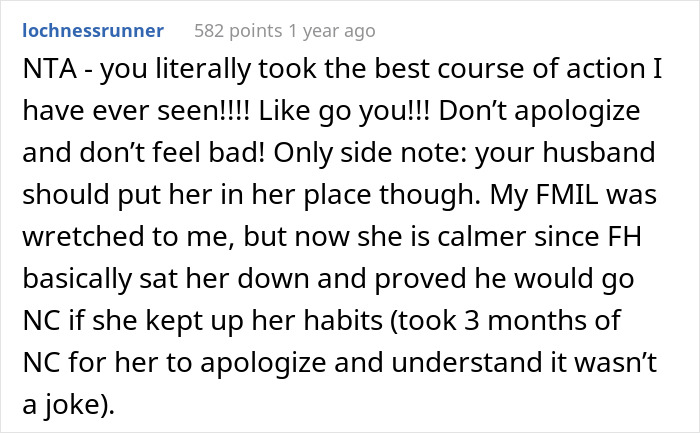