Rajkummar Rao and Patralekhaa are all set to exchange their vows in Chandigarh. Although the couple hasn’t spoken about their wedding ceremony yet, guests present at their engagement reception on Saturday night hinted that the nuptials are taking place at The Oberoi Sukhvilas Spa Resort, New Chandigarh.

According to the luxury stay’s website, the venue is situated at the foothills of the Himalayas and is spread across 8,000 acres in Siswan Forest Range. They offer amenities such as private pools, Ayurvedic and wellness programmes, seasonal cuisine, and activities in the forest situated around the resort.

The website has also revealed that the hotel offers four types of rooms, each coming at a different price. Their Premier Room, which is the cheapest room at the property, costs ₹37,500. They offer the Royal Forest Tent with Private Pool at ₹75,000 (with airport/railway transport), Luxury Villa with Private Pool costs about ₹200,000 and Kohinoor Villa costs about ₹600,000 per night.

Cost of rooms at Rajkummar Rao and Patralekhaa’s wedding venue. 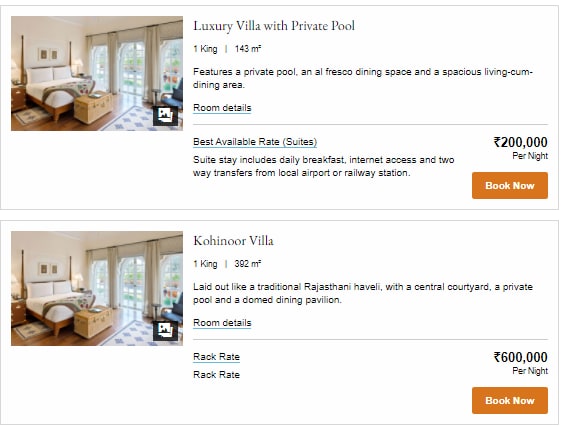 Cost of the villas at Rajkummar Rao and Patralekhaa’s wedding venue.

Ahead of their wedding ceremony, Rajkummar and Patralekhaa had a classy engagement reception on Saturday night with Rajkummar going down on one knee to propose to Patralekhaa in front of their guests. Patralekhaa too went down on one knee and asked him to marry her with a ring in her hand. Ed Sheeran’s Perfect played in the backdrop as the guests captured the moment.

The couple decked up in matching white outfits – Rajkummar wore a white kurta-churidaar paired with a matching jacket and sneakers whereas Patralekhaa wore a white off-shoulder gown with a short train. The guests too followed the theme. Actor Saqib Saleem and filmmaker Farah Khan attended the ceremony.

Rajkummar and Patralekhaa have been together for over 6 years now. In a previous interaction with Humans of Bombay, Patralekhaa had revealed that when she first saw Rajkummar in the film LSD (Love Sex Aur Dhokha), she thought he was ‘weird.’

“I thought that the weird guy he played in the film was actually what he was like. My perception of him was already tarnished. He told me later that he had first seen me in an ad and thought, ‘I’m going to marry her’. It was so ironic,” she had said.