The Earth is sexy. Annie Sprinkle had a sense of that even as a child, skinny-dipping in the glacial lakes of the High Sierra. Beth Stephens felt those same stirrings as a kid growing up in Appalachia, when she straddled bucking horses for rodeos. In 2008, Sprinkle and Stephens made that relationship official—the couple symbolically married the Earth.

“We thought, who needs the rights and protections of marriage? The Earth,” says Stephens, today a professor in the Art department at the University of California, Santa Cruz.

Their resulting performance piece, “Green Wedding to the Earth,” was equal parts earnest, playful, and avant-garde. Guests were given bags of soil to breathe deeply from during the ceremony. Soprano Emma McNairy performed an operatic striptease. The ceremony kicked off a new environmental movement: ecosexuality.

Ecosexuality is at once a sexual orientation, environmental activist strategy, and grassroots movement. And, it’s unabashedly queer. Compared to overly earnest, New Agey environmental movements, “it’s more of a punk rock, queer, drag pin-up-girl version of environmental activism,” Sprinkle and Stephens write in their book, Assuming the Ecosexual Position: Earth as Lover, newly released from University of Minnesota Press. At events and performances, fellow ecosexuals bury themselves naked in dirt and skinny-dip in rivers. The signs they carry at protests read “Fuck! Don’t Frack!,” “Composting Is So Hot!,” and “Dirty & Proud.” Since “Green Wedding to the Earth,” Sprinkle and Stephen have married the planet in more than a dozen different ways, including a blue wedding to the sky, a purple wedding to mountains, and a black wedding to coal. “We’re kind of wedding whores,” Stephens says.

Those drawn to the movement tend to—like Sprinkle and Stephens—find the earth erotic, sensual, romantic. After all, what isn’t sensual about licking raindrops off a leaf, caressing the bark of a tree, or burying yourself in mud? And yes, ecosexuals do make love to the earth—but it’s sex in a much broader sense than most people recognize—especially in a culture where heterosexuality is the norm, says Greta Gaard, an ecofeminist writer and professor at the University of Wisconsin River Falls. Expanding the definition of sex is, in itself, very queer, says Gaard. “The heterosexual movement confines sexuality within one man and one woman. It’s far from celebration or freedom.” Instead, the ecosex manifesto reads, “We caress rocks, are pleasured by waterfalls, and admire the Earth’s curves often. We make love to the Earth through our senses.”

The ecosex manifesto reads, “We caress rocks, are pleasured by waterfalls, and admire the Earth’s curves often. We make love to the Earth through our senses.”

While Sprinkle and Stephens popularized the ecosexuality movement, queer ecosexuals have been around for decades—perhaps centuries, Gaard points out. They just went by different names. The radical faeries, who emerged in Los Angeles in the 1970s, were gay men who gathered in the wilderness to explore a new spirituality rooted in nature and queerness. Lesbian separatists fantasized about gardening naked in the sun in women-only communes. Even Walt Whitman displayed some ecosexual tendencies in Song of Myself:

It is for my mouth forever, I am in love with it

I will go to the bank by the wood and become undisguised and naked,

I am mad for it to be in contact with me

These ecosexual movements contain an element that mainstream environmentalism lacks, says Jeff Feng, a PhD candidate at the University of California, Santa Barbara, and the founder of the Rhizomatic Project, a collection of interviews with queer environmental activists. That element is joy. While mainstream environmental movements tend to be “uncritical of themselves,” the ecosexuality movement has a sense of humor—it doesn’t take itself too seriously, Feng says. “What makes this queer is saying ‘we don’t need that respectability.’”

After all, the ecosexuality movement is all about pleasure. “Why not find the Earth erotic?” says Sprinkle, who in addition to her work in art and environmental activism, is a sex educator and holds a PhD in sexology. “We are a sex-negative culture. And as modern-day Americans in our society, we’re taught not to get pleasure outside the bedroom. People deny themselves pleasure and see sex as a bad, evil thing.” Currently, Sprinkle thinks that the sexiest thing about the Earth (aside from Stephens) is being spanked by ocean waves. For Stephens, the sexiest thing (aside from Sprinkle) is massaging the Earth with her feet—in other words, taking a hike. 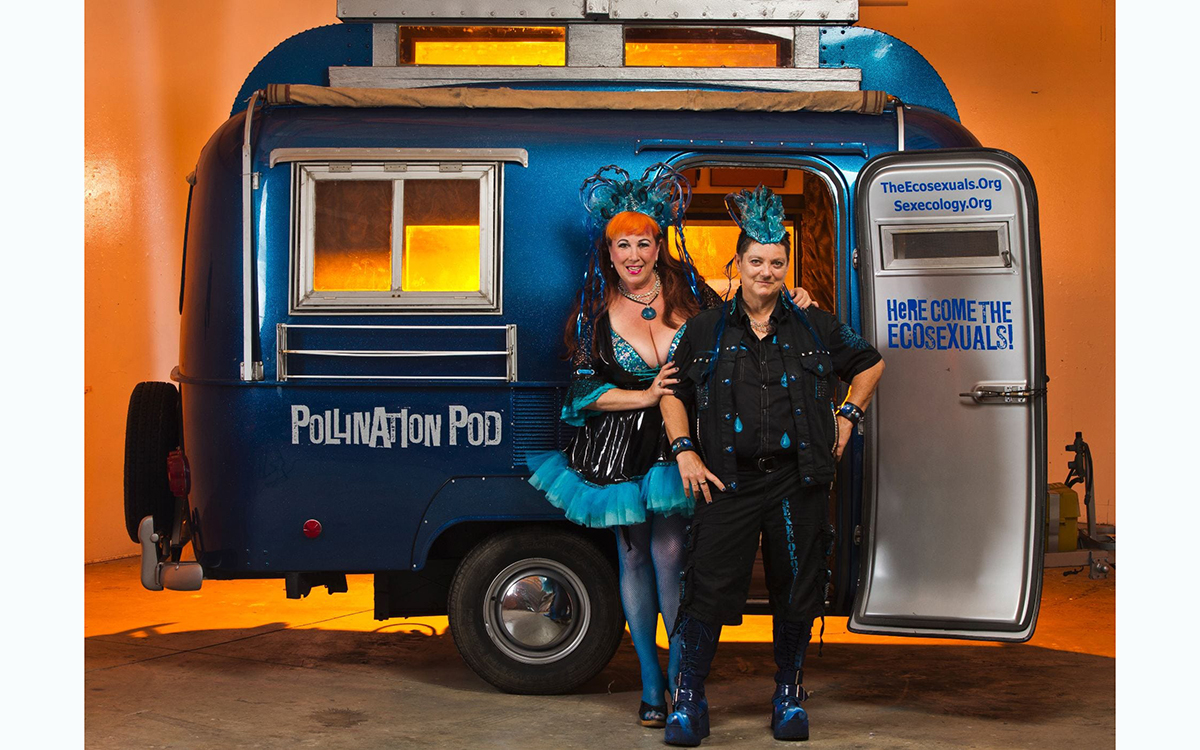 And if you look around the natural world, sex, in all its forms, is on display everywhere. Think about it: When we explain sex for the first time, we call it “the birds and the bees.” Hummingbirds stuff their tongues down the stamens of flowers. Dogs and cats spend hours each day totally absorbed in the act of licking themselves. Cows luxuriate in rubbing their backs against the rough bark of trees. “It’s a pretty randy planet, actually,” Stephens says.

So how do you begin to adopt the Earth as a lover? Well, you begin as you would with any love interest. Ask her/him/them out on a date. “You can do that silently or out loud,” Sprinkle says “Then try to listen to the Earth and see what they want.” An essential part of the ecosexuality movement is the concept of consent and mutuality, which ecosexuals afford the Earth just as they would a human lover. But consent looks pretty different with, say, a tree, Sprinkle and Stephens acknowledge. They don’t expect a literal, verbalized reply. Instead, they quiet their thoughts, listen deeply, and try to sense what the Earth wants.

So once the Earth has agreed to the date, go ahead and take them out. Go on a picnic. Skinny-dip. Clean up your local beach. As you do, flirt with the Earth, give them a massage with your feet, admire their curves. It can be a slow date, Stephens says. Let it last days, weeks, years, or even a lifetime.