Teresa Giudice just confirmed that she doesn’t plan to invite all of her RHONJ co-stars to her wedding. She’s currently enjoying the news of her engagement with Luis Ruelas. Her new beau popped the question during their trip to Greece. In a new interview, Teresa shared her wedding plans.

While she hasn’t “decided anything yet,” she already has an idea of who is not on the guest list. The couple hasn’t even set a wedding date yet. Fans have been wondering why Teresa is moving so fast with this engagement. They also wonder if she’s pregnant with his baby.

In a new interview with Metro, Teresa Giudice revealed that she doesn’t have any concrete plans for her upcoming nuptials to Luis. Right now, she’s “enjoying” their engagement and feels like she’s in “a little love bubble.” Teresa doesn’t want anyone to burst that bubble, not even her own fans. They think her new man is “using” her to get on reality TV.

She hopes they will marry outside of Jersey. For now, the couple wants to focus on the holidays. Luis and Teresa just moved in together. Now, they have to make plans for Thanksgiving and Christmas.

[Credit: Teresa Giudice/Instagram]Teresa teased that they will hopefully say “I do” in summer 20221. She’s holding out hope for a “destination wedding.” Just don’t expect the Bravo cameras to follow them over there. This comes after Teresa Giudice denied the rumors that Luis is only with her for TV fame.

“I figure it has to be when the kids are not in school,” she revealed in a separate interview with Extra. “It’s about Louie and I and our kids.”

Teresa Giudice dropped a major bombshell about her wedding guest list. She has no intentions of inviting the entire cast of RHONJ. The reality star wants to have her ceremony as private as possible.

“Will all the Jersey housewives be invited? Absolutely not!” Teresa Giudice confirmed. “Some will, some won’t. We haven’t got there yet.”

The Real Housewives of New Jersey alum Dina Manzo attended the couple’s beach proposal at the Amanzoe Resort in Porto Heli. She would be shocked if her husband David Cantin doesn’t make the guest list. However, Teresa did reveal that Dolores Catania, Jackie Goldschneider, Jennifer Aydin, and Margaret Josephs will attend her wedding. 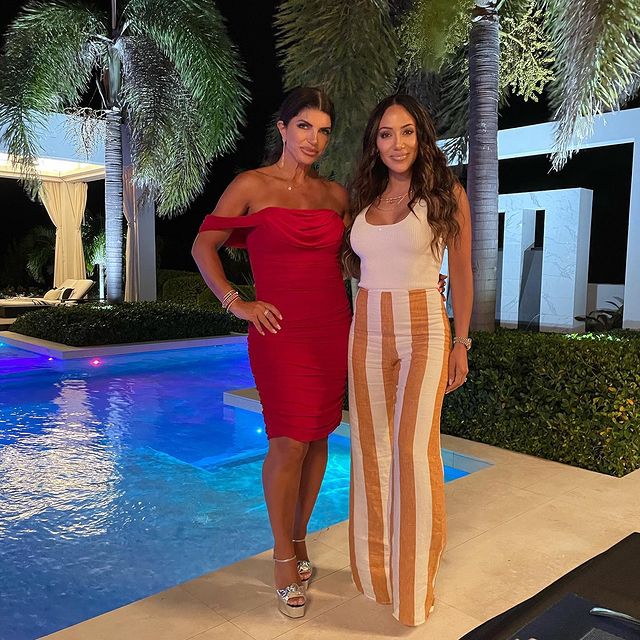 [Credit: Melissa Gorga/Instagram]Her sister-in-law, Melissa Gorga, will also be there. She confirmed that news in an interview with Us Weekly. Melissa said that Teresa’s wedding will be “so Jersey and so fabulous!” This will be her first time attending one of Teresa’s weddings.

Are you surprised to hear that not all of her RHONJ co-stars will attend her wedding? Sound off below in the comments.

Check back with TV Shows Ace for more news on Teresa Giudice.

Chanel Adams is addicted to reality TV. She’s been writing about entertainment and pop culture since 2006-07. She’s glad she never became famous because she would never want to be in the tabloids.