A search for the ‘mystery bride’ was launched by the North Texas Tollway Authority (NTTA) in Dallas, US on Wednesday after the authorities recovered a mystery box with a white wedding dress in it left in the middle of the Dallas North Tollway. The tollway authority has been trying to get this wedding dress back to its rightful owner by making the pictures go viral on their official Twitter handle.

According to NTTA, the circumstances behind what may have got the box with a wedding dress in it on the road unattended remains unclear. Officers were seen inspecting the highway traffic footage to determine if the dress had fallen from the car. They posted an appeal on the official Twitter handle, asking the owner of the dress or anyone who knew who the dress belonged, to give them a call immediately.

“We need your help! Did you lose your wedding dress on DNT in Frisco? If this is your dress, or you know who it belongs to, reach out to us,” the North Texas Tollway Authority wrote in the social media post.

Local broadcasters reported that the dress will be preserved for approximately 90 days as the search is on. If unclaimed, the toll authorities plan to auction it with the rest of the antique items. The authorities were determined to unite the wedding dress with its owners saying that it could be of utmost significance to someone who may have unfortunately lost it.

‘If they threw it on highway, they don’t want it..’ internet speculates

Several people on social media have been saying that the dress is theirs, although there were many deceitful claims as none of those who claimed to be the rightful owner could provide the authorities with correct identifying information associated with the dress. The search is complicated with dozens of respondents who haven’t exactly been honest. “Several people have come forward claiming the dress belongs to them. No one has provided accurate details about the dress. We are happy to return it to the person who does provide information accurately describing the dress we found,” NTTA wrote on Facebook.

Internet speculated whether the dress was left on purpose or it accidentally fell out of a moving vehicle. “Might not have been an accident,” one said. “If they threw it on the highway, she doesn’t want this dress or the man,” another said, making a laughter emoji. “I can’t wait to hear the story behind this, hopefully, we get to,” meanwhile one other said. 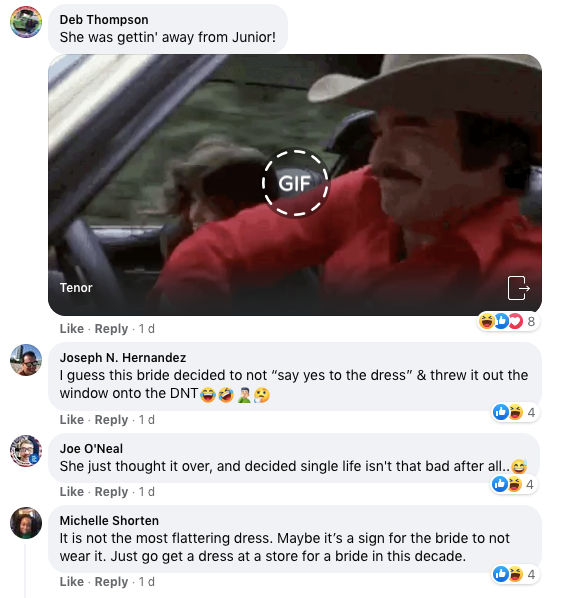 Get the latest entertainment news from India & around the world. Now follow your favourite television celebs and telly updates. Republic World is your one-stop destination for trending Bollywood news. Tune in today to stay updated with all the latest news and headlines from the world of entertainment.

Bride and Groom Tumble Over During Wedding First Dance: ‘Falling in Love’