‘The Bachelorette’ is making history with its first two-lead season. Fans were treated to the largest group date in the show franchise’s history during Monday night’s episode, which saw co-leads Rachel Recchia and Gabby Windey step out with the 19 suitors.

The men arrived at a magnificent venue for the group date, where they learned they’d be appearing for a photo shoot with famed photographer Franco Lacosta. “Having the largest group date ever today and the first group date of the season is pretty overwhelming,” Gabby told ET ahead of the episode airing on July 25. Even though there were a lot of men on screen, each one of them came in with vigor. The Bachelorettes seemed to be having a good time with the guys despite the fact that fans at home couldn’t help but squirm at a hairy baby in diapers.

Gabby and Rachel both provided suggestions for how the men could stand out amid so many others. Franco has arrived for the photo shoot day, and had his work cut out for him with 19 men to shoot. But he was prepared for a variety of odd situations. For instance, “Homoerotic Car Wash” and “Creepy Man Baby.” 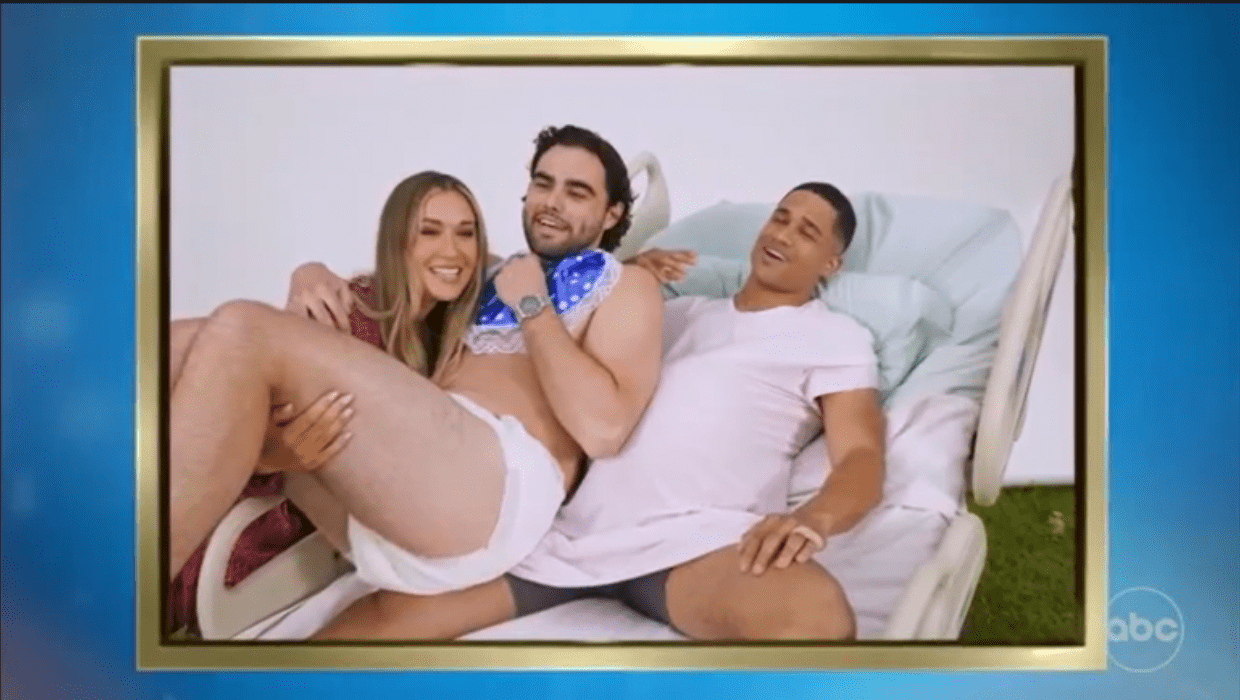 Meatball doused himself in pasta sauce last week, and this week they put him in an adult diaper. After a series of bizarre set-ups including, Adam and Eve, Airplane Agony, and Hospital Horror Show, it was time for the proposal photos. And the guys got to wear proper suits for these shots. It’s unclear whether each guy was photographed proposing to each Bachelorette, but Tino’s proposal to Rachel, in which he tells her, “The way I feel with you, I want forever,” and Nate’s proposal to Gabby stood out. “The second I laid eyes on you, I felt like I was meeting my best friend,” Nate said, making viewers’ eyes moist despite the fact that it wasn’t a real proposal.

Aside from the two proposals, fans were disappointed with the photo shoot and how it played out. A fan wrote, “It’s time for the classic photoshoot group date! Now we find out how much of a contender each guy is based on how dumb an outfit they’re forced to wear. #TheBacheloretteabc #TheBachelorettes #TheBachelorette.”

Tired of watching yet another photoshoot with the girls in wedding dresses, a fan asked: “The wedding photoshoot agaaaaain Aiiiight how they gon put a twist on this tho? #TheBachelorette.”

Aiiiight how they gon put a twist on this tho?#TheBachelorette

Another fan, calling it a social experiment for the audience, wrote, “The Bachelor franchise is merely an audience social experiment to see how many wedding photoshoot dates we can watch before we mentally break from not being able to distinguish differences in time and space #TheBachelorette.”

After watching “Meatball” being birthed by Aven, a fan tweeted, “I’m usually all for the photoshoot date but ummm I’m uncomfortable with the meatball baby @BacheloretteABC #TheBachelorette.”

With so many different themes thrown in one photoshoot, a fan wrote, “Not a single cohesive theme to be found with this photoshoot #TheBachelorette.”

One fan couldn’t help but call it the worse photoshoot in Bachelor history, “Why is this the worst photoshoot of all time? #TheBachelorette.”

‘The Bachelorette’ Season 19 airs on Mondays at 8 pm ET/PT on ABC.

This article contains remarks made on the Internet by individual people and organizations. MEAWW cannot confirm them independently and does not support claims or opinions being made online.