For a bride, her wedding outfit is the most important thing. She desires to look the best on her day in her bridal outfit and aims to create a unique style that everyone would remember. We have seen most of the Indian brides choose vibrant and pastel-coloured outfits for their wedding day and have hardly come across a bride, who would opt for a white colour outfit.

According to Hindus, white is not considered as an auspicious colour to be worn by a bride on her wedding day. However, this bride went against the age-old traditions by not wearing a red outfit for her shaadi. Instead, she opted for a subtle white saree from the ace designer, Sabyasachi Mukherjee. 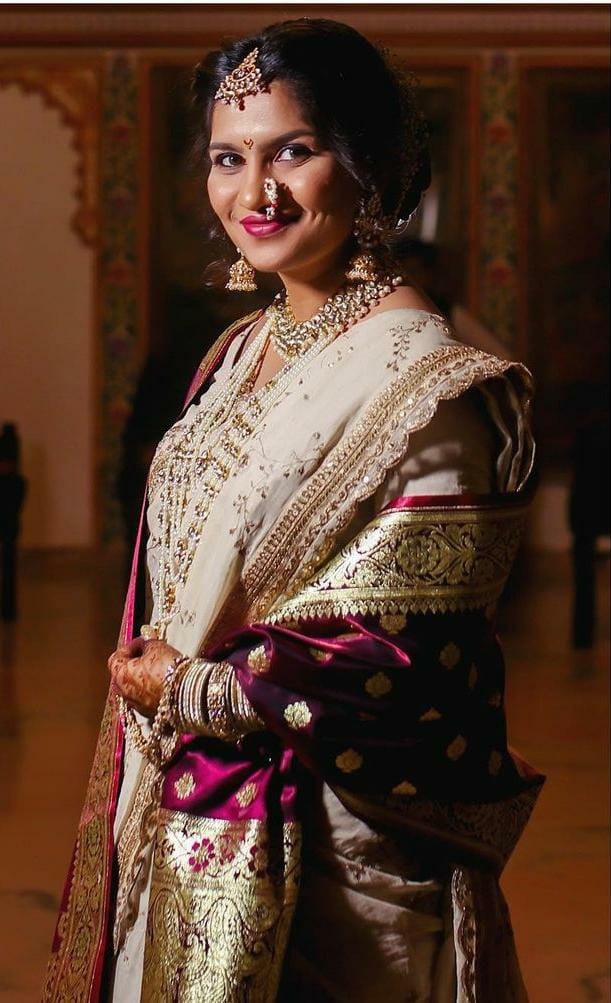 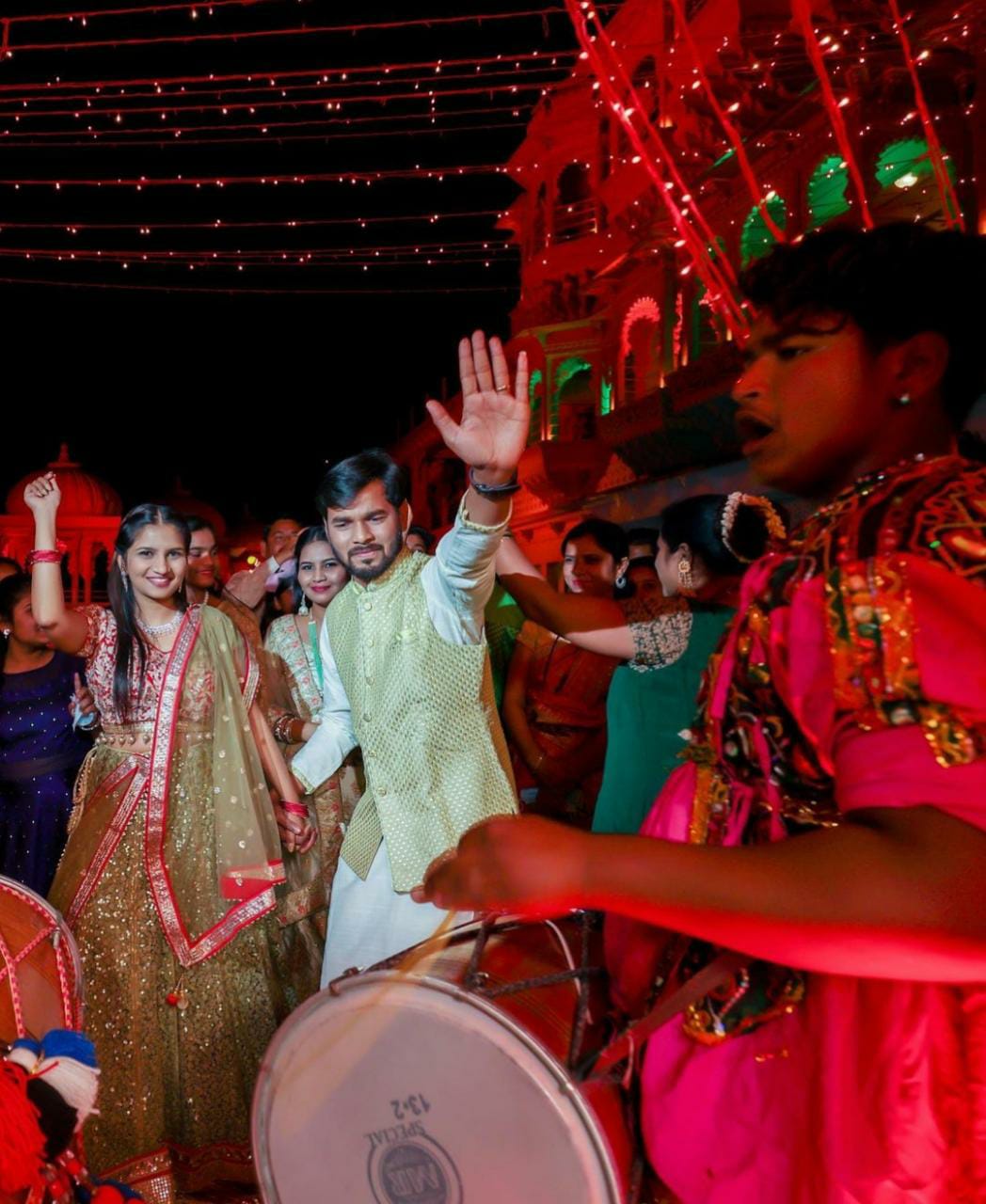 The bride had decided to go against all the odds for her wedding day and opted for a white coloured saree from the ace designer, Sabyasachi Mukherjee. Her saree had minimal floral patterns in golden along with a golden gotta-patti border attached to her outfit’s hem. The bride had aced her look by draping a beautiful banarasi silk dupatta in the magenta colour that had displayed intricate golden designs all over it. 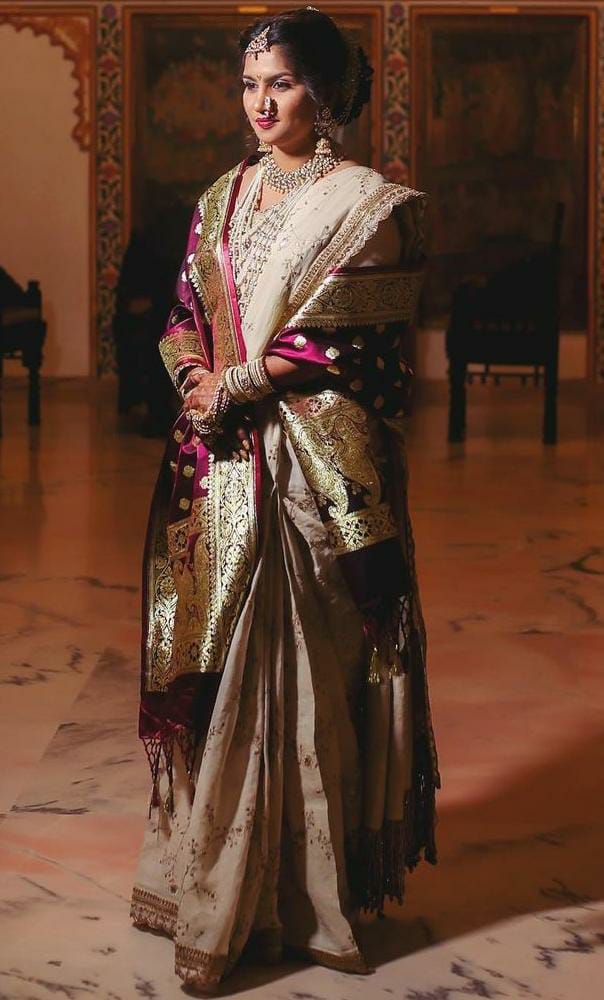 The bride had accentuated her look with beautiful pearl jewellery. She had paired it with two heavy necklaces, jhumkas, Brahmi nath, maang teeka and golden bangles. The gorgeous bride had completed her look with a bun which was decorated with red roses and baby birth flowers. 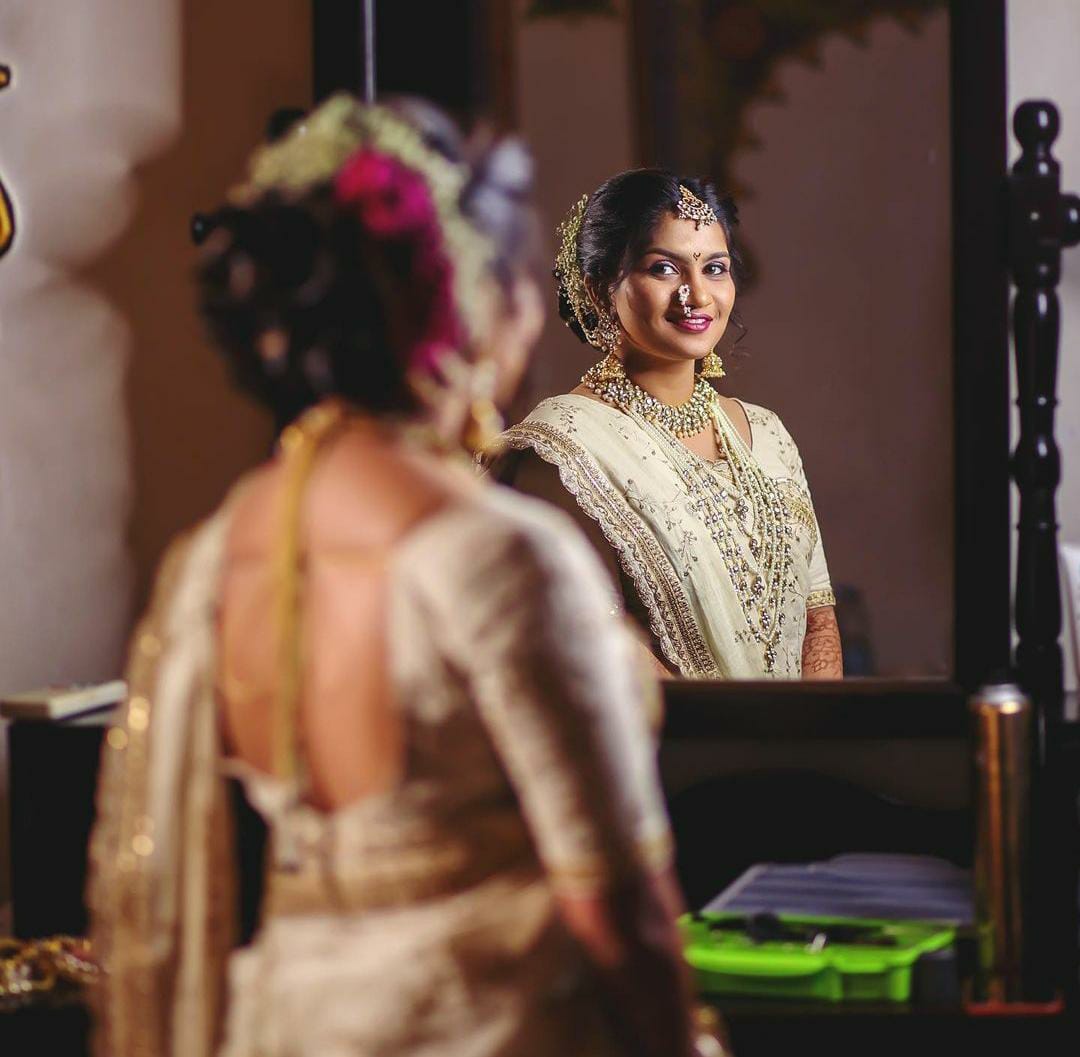 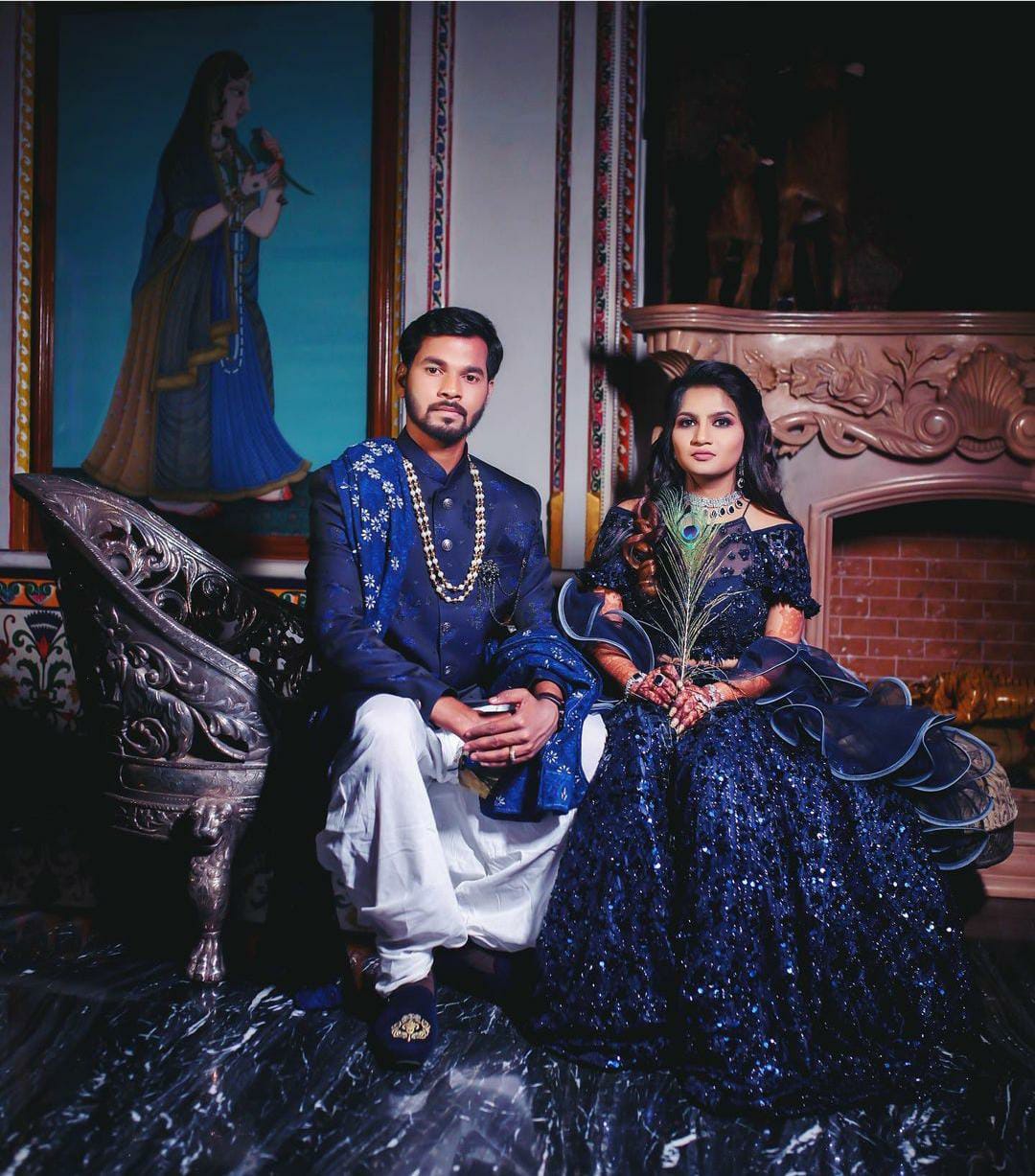 For the sangeet ceremony, Vidyashree Khaire had aced her look in her OTT glittery ensemble. She had donned a royal blue lehenga and an off-shoulder blouse with a ruffled dupatta. Her outfit was embellished with sequins. On the other hand, the groom had donned a royal blue bandhgala sherwani suit with white dhoti and a blue doshala with small floral prints in white. He had paired it with a white pearl necklace and a pair of blue juttis.

Don’t Miss: Entrepreneur Bride Wore An ‘Anarkali’ Suit For Her D-Day, From The Designer Dimple And Harpreet 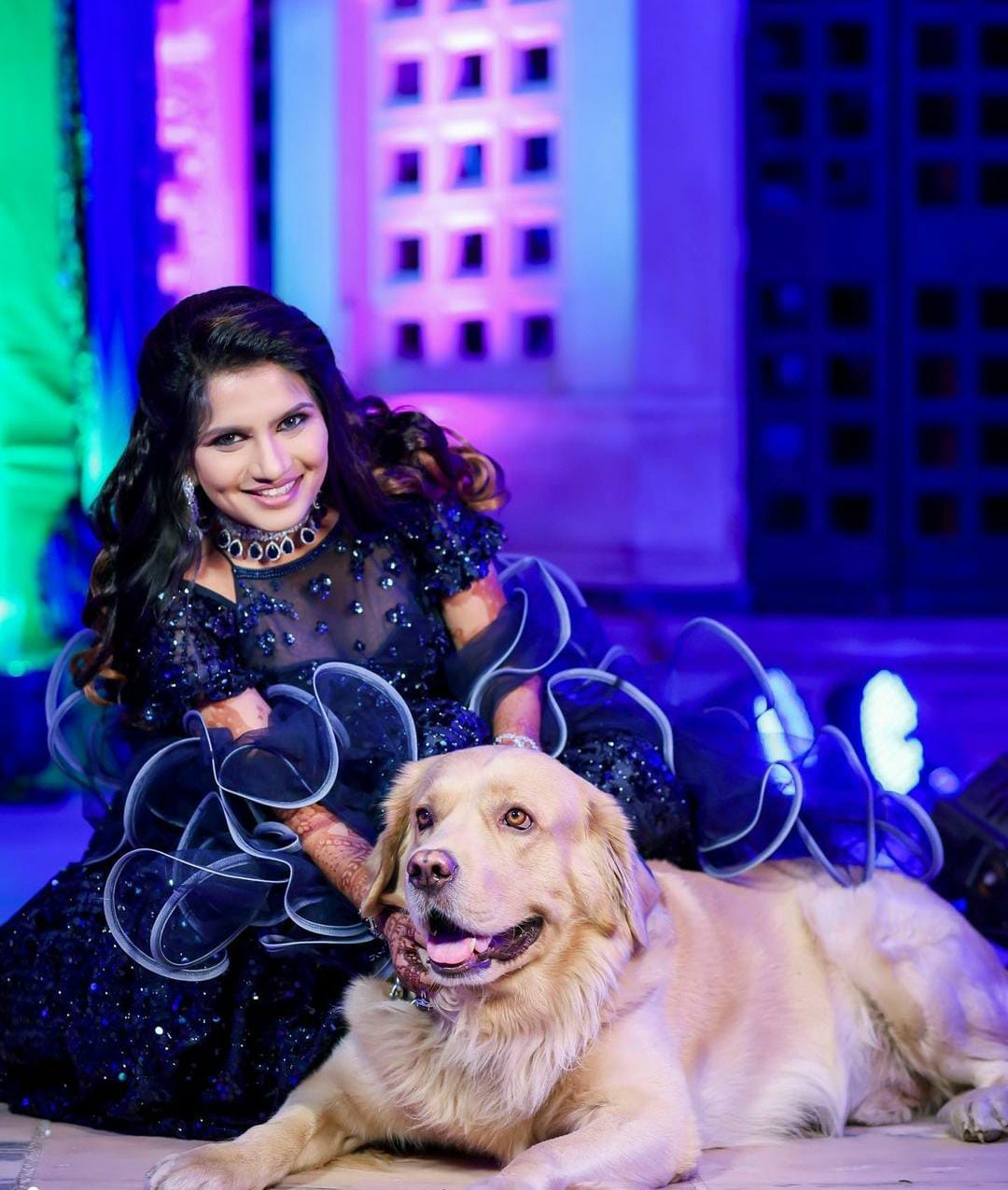 The bride had donned a beautiful golden lehenga with red detailing. She had paired it with a half-sleeved choli in the colour red and golden, with a net dupatta. Her outfit was heavily sequinned and had given her a royal look. The bride had cutely posed and shown off her mehendi in the pictures. 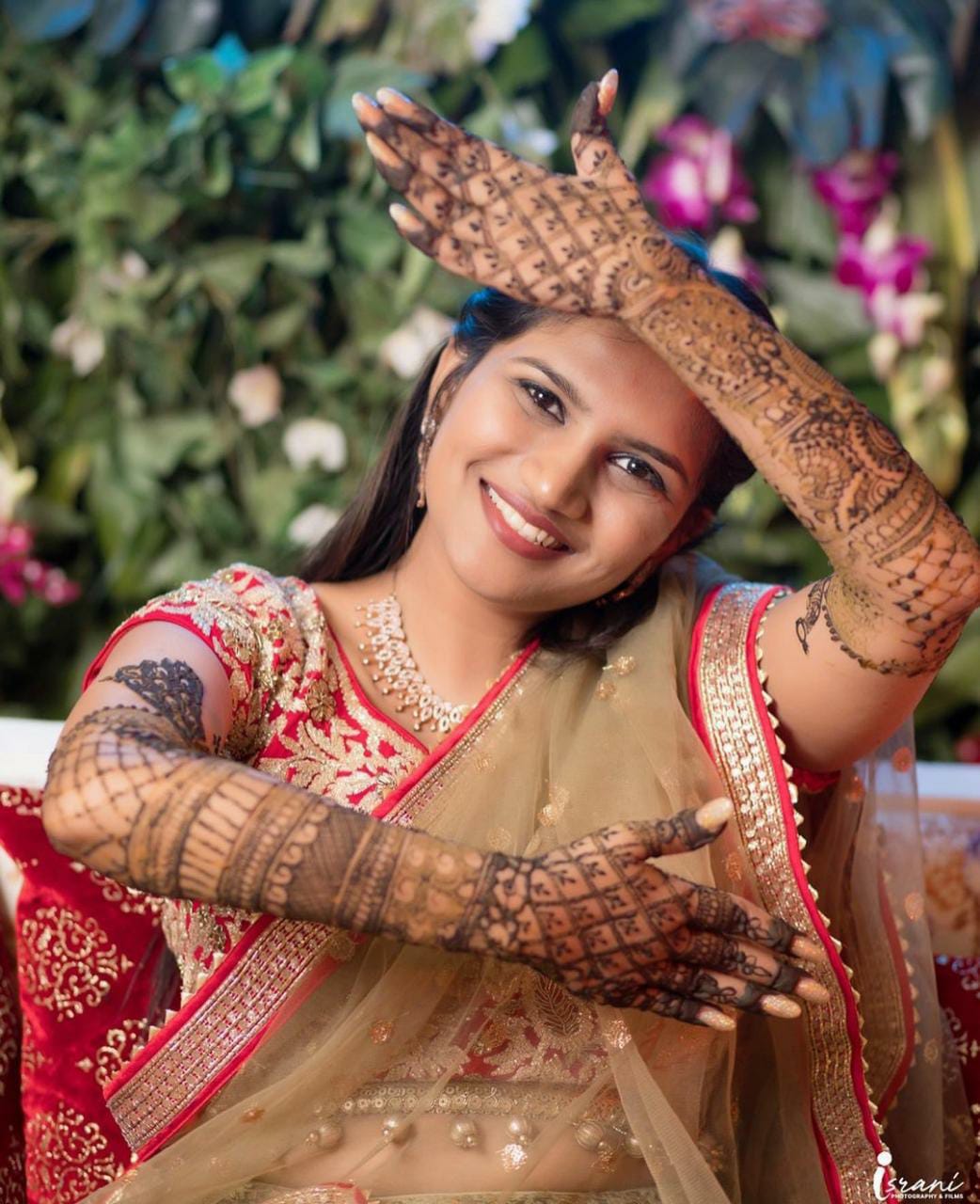 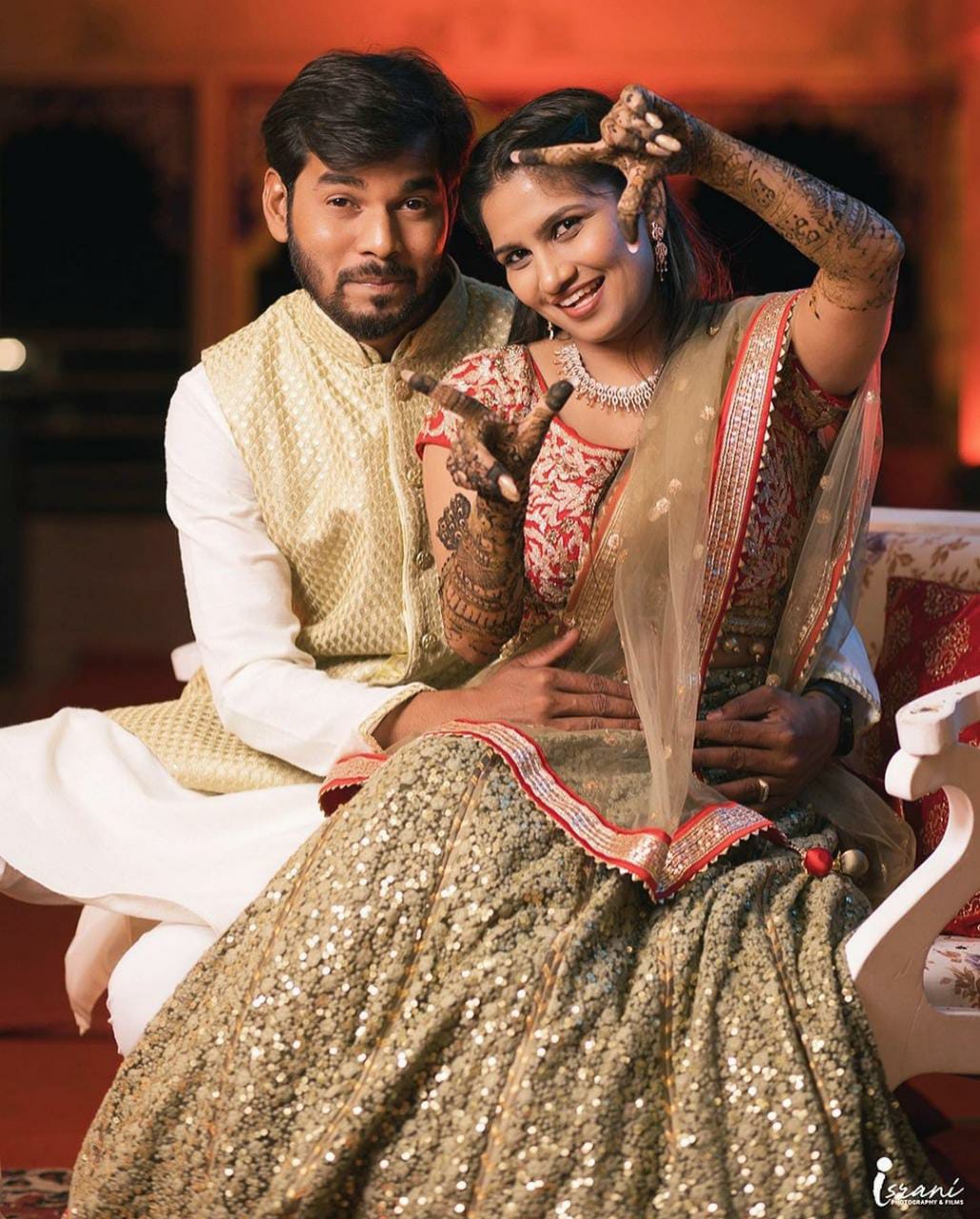 The groom had aced his look in a pure white kurta-pyjama set along with a golden Nehru jacket. He had paired it with golden juttis, with floral motifs designed on it. Even the groom had flaunted his minimal mehendi design. 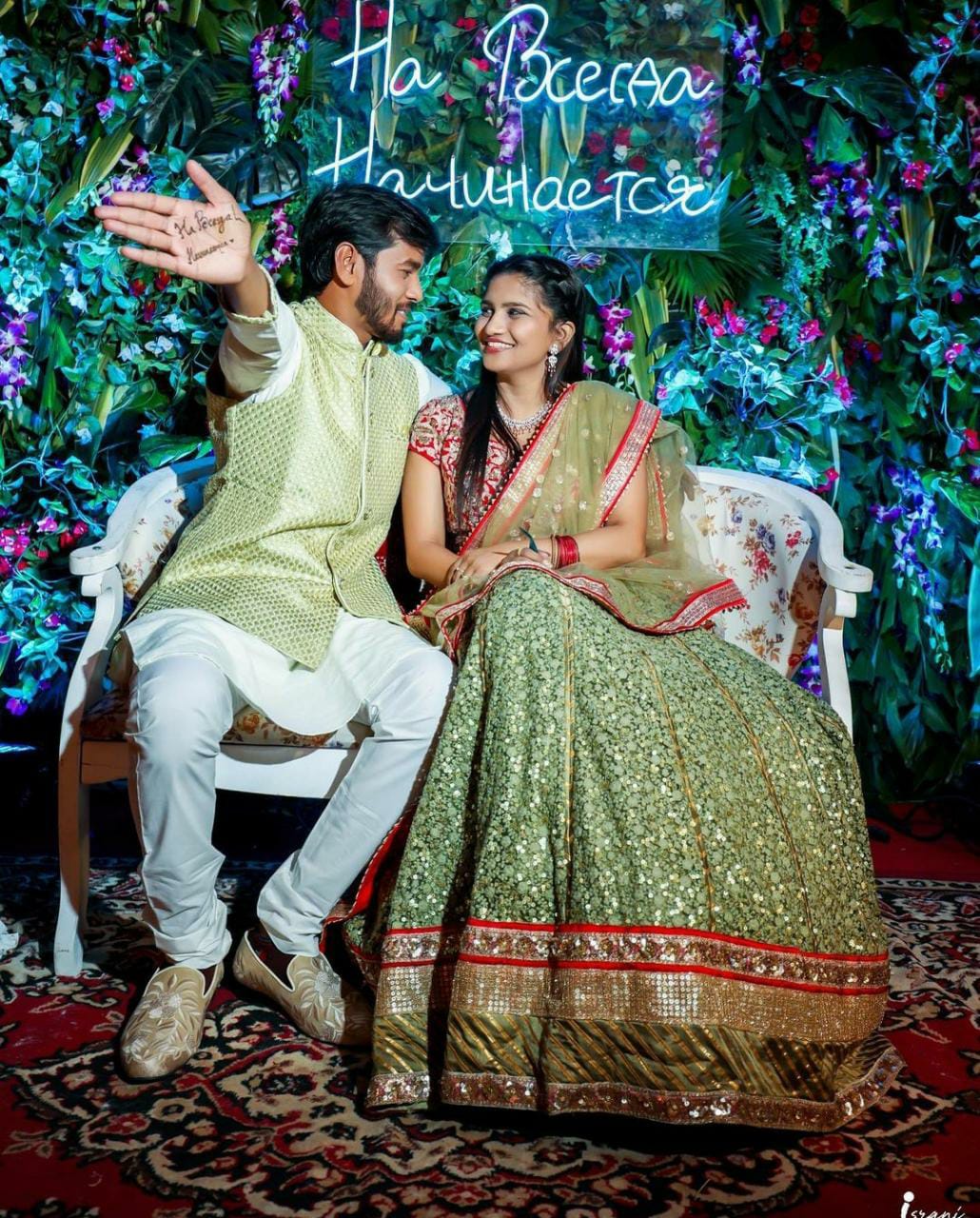 On the function of the bangle ceremony, the bride had opted for a banarasi silk saree which had featured a mix of beautiful colours, green, red, yellow, orange and golden. To complete the traditional look, she had accessorised it with gold jewellery and had left her hair open. 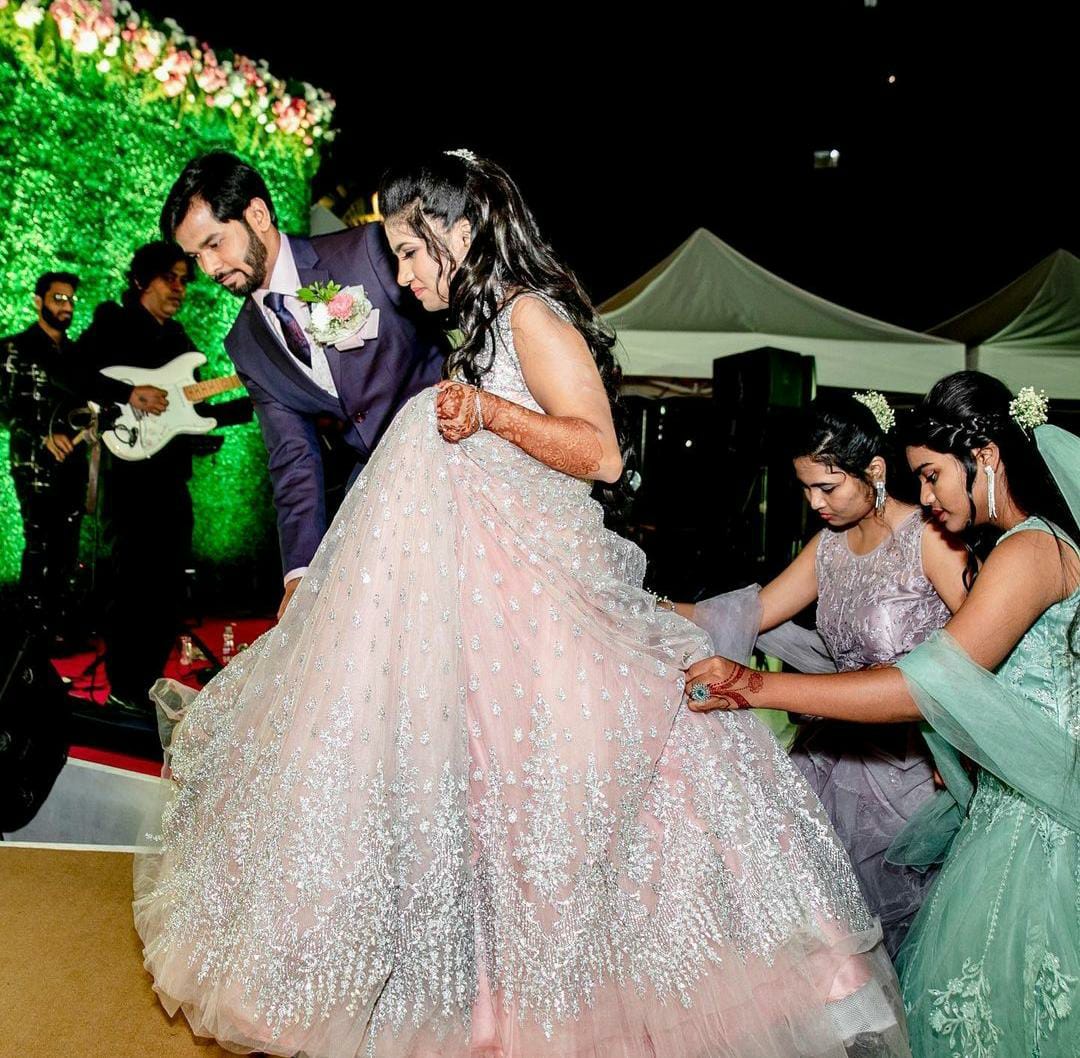 Her engagement look was not less than that of a princess. The bride had looked like a real-life princess in her shiny pastel pink gown, which was embellished with glitter. She had kept her jewellery minimal with only a stone studded necklace, earrings and a bracelet. At the same time, the groom had looked equally good in his blue pant-suit set and a tie. 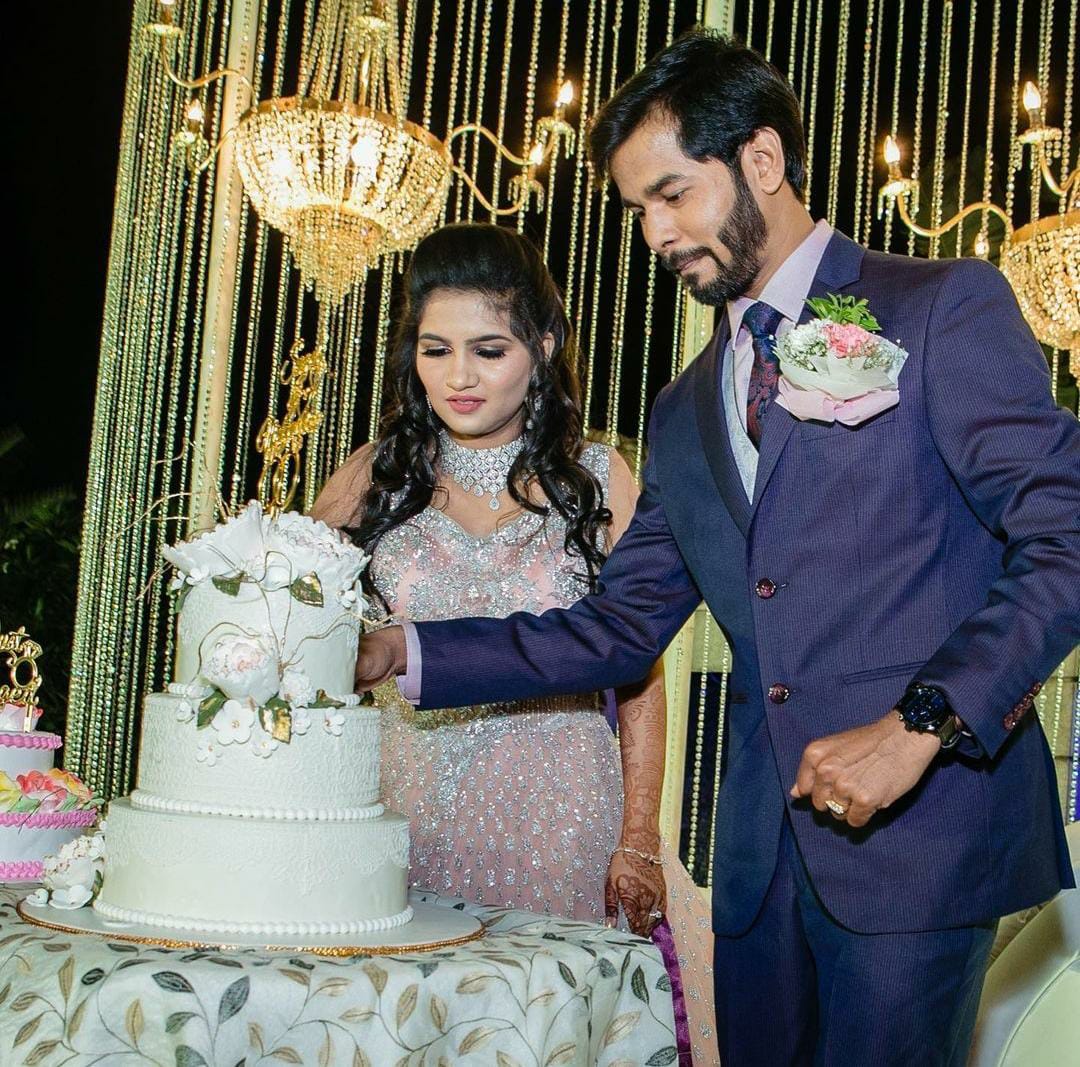 Wishing the couple a happy married life ahead.