Our ideas about marriage and marital roles have changed radically in the past 50 years, especially now that women are major players in the work force. What’s changed less is the notion of the wedding: sure, there are always those couples who prefer to celebrate their union with less-conventional events like beach barbecues, and those who avoid the fuss altogether by sneaking off to city hall. But even exceedingly modern, forward-thinking women still want the fantasy of the pristine white dress, the cake festooned with swags of frosting or flowers or both, the tradition of being “given away” by a father or father figure. Even if some of these conventions cut against our cherished notions of feminist autonomy, they also fall staunchly under the category of tradition, rituals that connect us with our forebears. And that’s just one reason we have a new version of Father of the Bride in 2022: as long as there are young women going off to get married, there are going to be fathers who have mixed feelings about seeing them go.

Andy Garcia plays Billy Herrera, a successful Miami architect who tells us, in the movie’s voiceover introduction and elsewhere, how as a young man he came to the United States from Cuba with nothing. He and his wife, Ingrid (Gloria Estefan), have built a life together in the beautiful, sprawling house Billy built for them, in the years when no one would hire him. They’ve raised two daughters: Cora (Isabela Merced) is a college dropout who has disappointed her father; he doesn’t understand her passion for clothing design (though a later revelation about her sexual orientation seems to bother him a lot less). Cora’s older sister, Sofia (Adria Arjona, recently seen in Olivier Assayas’ Irma Vep TV series, and in Marvel’s Morbius), is her father’s pride and joy, a New York City-based lawyer whom he hopes will return to Miami to practice. Instead, she comes home for a visit and drops a mini bombshell on the family: Not only is she getting married to a man they’ve never met, a sweet, swoony colleague named Adan (Diego Boneta), but she’s also moving to Mexico to work for a nonprofit.

Estefan, Garcia and Merced take in the bride and groom

Sign up for More to the Story, TIME’s weekly entertainment newsletter, to get the context you need for the pop culture you love.

Neither of these developments pleases Billy, who seems frustrated that he can’t control everything in his orbit, including the personal lives of his kids. There’s more trouble: his own marriage is in a shambles. Ingrid has decided she’s been ignored for too long—taking a backseat to both Billy’s work and his obsession with fly fishing—and she wants out. Meanwhile, Adan, who is Mexican, brings some surprises of his own, including a somewhat unconventional family that has certain ideas about how lavish the upcoming wedding should be. (His mother, delightful in the few minutes she gets onscreen, is played by Laura Harring, of Mulholland Dr. fame.) 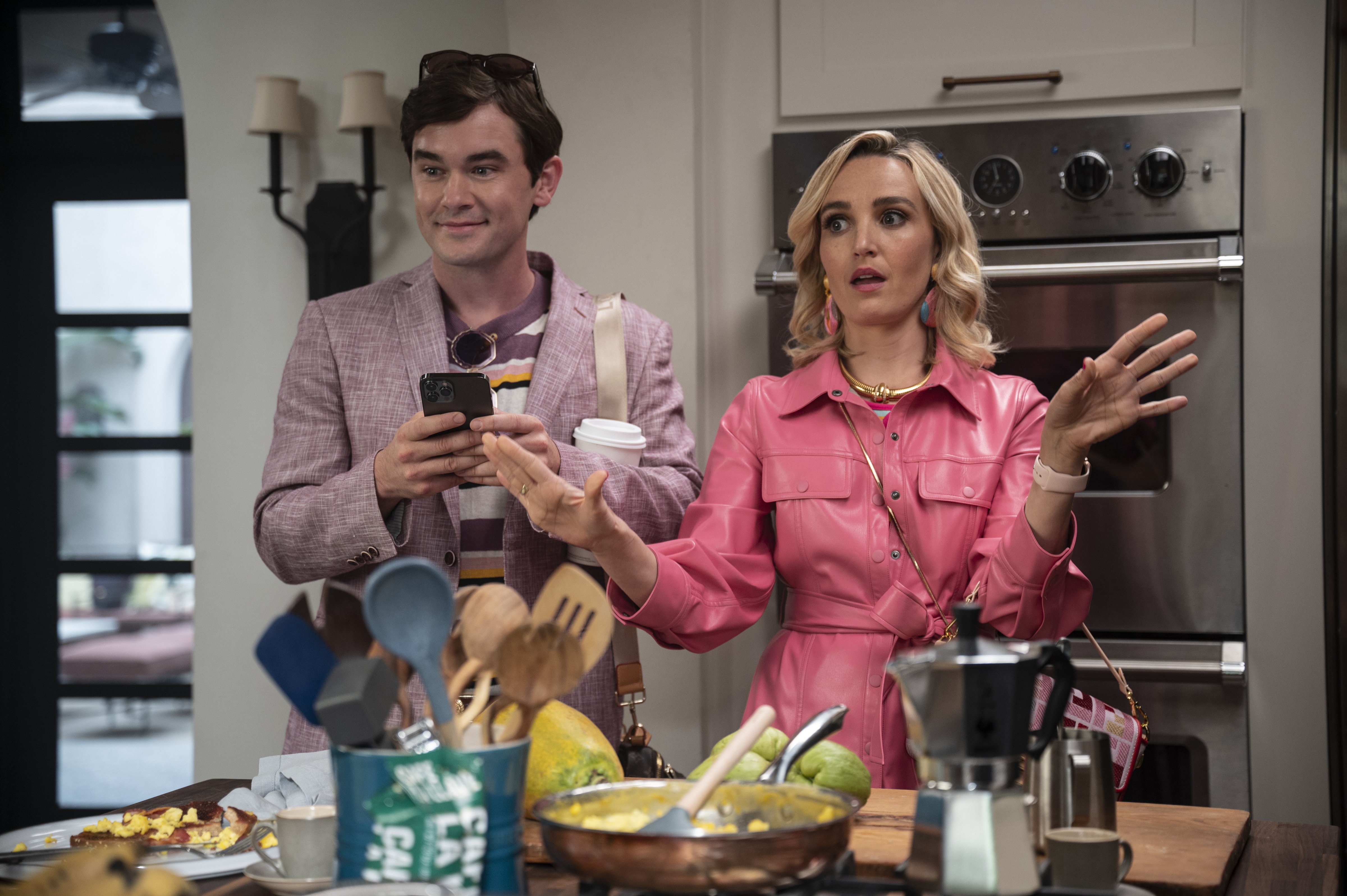 The idea of the father who can’t wrap his brain around “losing” his daughter is perennial, which explains why this particular father-of-the-bride idea, which originated with a 1949 novel by Edward Streeter, keeps coming around. (The earlier films inspired by the book were Vincente Minnelli’s 1950 version, starring Spencer Tracy and Elizabeth Taylor, and a 1991 adaptation directed by Charles Shyer, with Steve Martin and Diane Keaton.) Directed by Gary Alazraki (one of the creators of the of the Netflix Spanish-language series Club de Cuervos) and written by Matt Lopez, this Father of the Bride has a breezy charm. Garcia carries the film ably with his gruff elegance: it’s easy to buy him as a father who loves his daughters but who isn’t quite ready to let them be the people they need to be. A self-centered Instagram-famous wedding planner (SNL‘s Chloe Fineman) shows up here and there with a nice, big bouquet of cluelessness: Her idea of wedding entertainment is to combine flamenco dancers with live flamingoes. When Billy informs her incredulously that flamenco is from Spain, not Cuba or Mexico, she thanks him, with faux-spiritual humility, for this teachable moment.

Read more: 20 Romantic Comedies That Put a New Spin on an Old Genre

The small details are what give this Father of the Bride its gentle glow. Alazraki is adept at showing the ways in which a Cuban family and a Mexican one might have some clashing values, even as those who aren’t from Hispanic or Latinx backgrounds might think, Everyone speaks Spanish, so what’s the problem? And Alazraki is alive to glancing touches that add to the whole: When Billy is upset, he retreats to the Domino Park in Little Havana, where many of the players are older and grouchier than he is. One of them wears two sets of glasses, one atop the other, a classic old-man look that never goes out of style—a little like the father-of-the-bride concept, which may be old, but which still has some life in it yet.