From bridal bouquets to wedding dresses and photographs, there are a lot of choices to be made when it comes to your wedding day – but what if you had to run them by a family member, too?

LOOK: 21 royals who made adorable bridesmaids and page boys in unearthed wedding photos

The Duchess of Cambridge, Princess Eugenie and more royal brides included Her Majesty The Queen in their decision-making when planning their big day. Why? There are certain protocols and rules the royals have to follow, but some of them have been broken from time to time – take a look.

WATCH: Take a look at the best royal wedding dresses of all-time

The Royal Marriages Act 1772 requires members of the royal family to obtain permission from the Queen to marry. So any royal proposal plans will have to be checked with Her Majesty first before there is any hint of getting down on one knee.

Once the couple is happily engaged, if the bride is not already a royal, and is set to be welcomed into the family, things get rather serious. Both Kate Middleton and Meghan Markle took training courses in what it means to be ‘royal’ – everything from who to curtsy to – and when, as well as a very intense SAS training session for their own safety. According to Finding Freedom by Omid Scobie and Carolyn Durand, Meghan fast-tracked her training due to the very serious threats the couple were having.

The Queen is one of the special people to see the bride’s wedding dress prior to the big day – simply so she can give her nod of approval. It is likely that Her Majesty will eye the dress designs before work even takes place on the gown. Of course, the brides and their seamstresses already know the royal protocol surrounding formal royal outfits.

These rules include no short hemlines, no low necklines, and no shoulders on display. However, Meghan Markle made a rather risqué decision with her second wedding dress when she stepped out in a Stella McCartney halterneck gown.

Out of respect for the British monarchy, it is expected that any royal bride will wear a British designer on their wedding day. David and Elizabeth Emanuel designed Diana’s iconic wedding dress and Sarah Burton for Justin Alexander was behind Kate Middleton’s stunning lace gown. With Meghan Markle being American and favouring many US and Canadian fashion brands it was rumoured she may break with tradition, however on her wedding day in 2018, she wore a beautiful simplistic style from British stylist and designer Clare Waight Keller.

A 150 ft long basement vault is home to Her Majesty’s jewellery collection and royal brides are invited in to browse the pieces. However, according to Finding Freedom, the Queen whittles down the selection herself, limiting the choice for the bride-to-be. 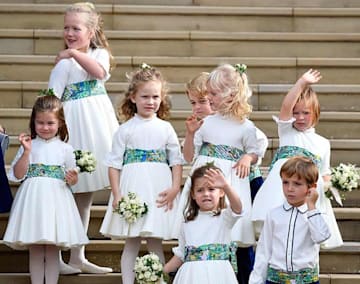 However, Duchess Kate also chose her sister Pippa Middleton to be a maid of honour, making her one of the few adult members of a royal bridal party.

RELATED: 5 royal engagement ring replicas you can buy on Amazon: From Kate Middleton to Princess Beatrice

Royal wedding rings are all the same

All royal wedding rings are made from Welsh gold

It is an age-old tradition that royal brides (and grooms if they choose to have a ring) will have their wedding rings made from Welsh gold – and the gold will be personally gifted by the Queen. For nearly 200 years, the royal family have opted for this as the rarest and most expensive type of gold in the world. Unconventionally, Princess Beatrice opted for a silver design. 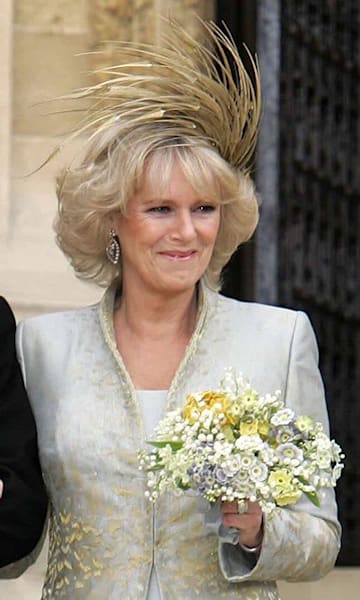 Royal brides all have a sprig of myrtle in their bouquets

Another royal rule for brides to stick to is when it comes to selecting the flowers for their beautiful bouquet. They are free to choose their favourite blooms, or ones that have meanings to them however, the bouquet must include sprigs of myrtle to be in keeping with royal etiquette. The tradition began in 1858 when Queen Victoria’s daughter included it – and it has been used ever since.

Royal brides part with their bouquets

There is no throwing of the bouquet at a royal affair, instead, the bride’s floral posy is laid on the Tomb of the Unknown Warrior out of respect. A tradition started by the Queen Mother, royal brides either leave their bouquets here on the day (if they get married at Westminster Abbey) or travel there the day after to pay their respects. 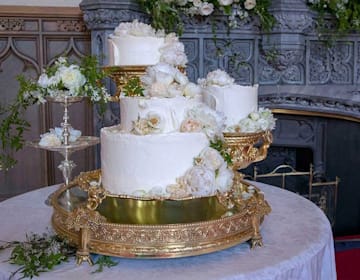 Meghan and Harry surprised royal fans by choosing a non-traditional lemon and elderflower cake made by Claire Ptak.

Royal couples must have official photographs

Royal brides do not really have the option of having an unplugged, off-grid wedding with no photographic evidence – all royal weddings have formal portraits taken with their closest family to keep in the historic records. Even Princess Beatrice and Edoardo Mapelli Mozzi who opted for a private, low-key wedding released official pictures of their stunning day.