This bride went through bloody hell on her wedding day — thanks to a pack of bloodthirsty leeches.

Newlywed Madalyn Wise was all dressed in white, sharing the first dance with her new husband Jayden, when her mother-in-law noticed a stream of blood pouring from the bottom of her lacy gown.

And after a quick scan of the blushing bride’s body, the ladies discovered that a legion of leeches had attached themselves to her leg.

“There were three leeches,” said Wise, 24, in a TikTok testimonial Friday about her nightmarish misfortune, which took place on her wedding day in April 2021. “There was just so much blood, and it seemed like it wasn’t going to stop bleeding.”

The explanatory post came as follow-up footage to her viral video, which featured several shots of her seeping limb and one of the overly-engorged parasites writhing around on the floor after its foul feast.

Wise and her mother-in-law discovered a team of leeches had attached themselves to her leg. TikTok / madalyn.wise 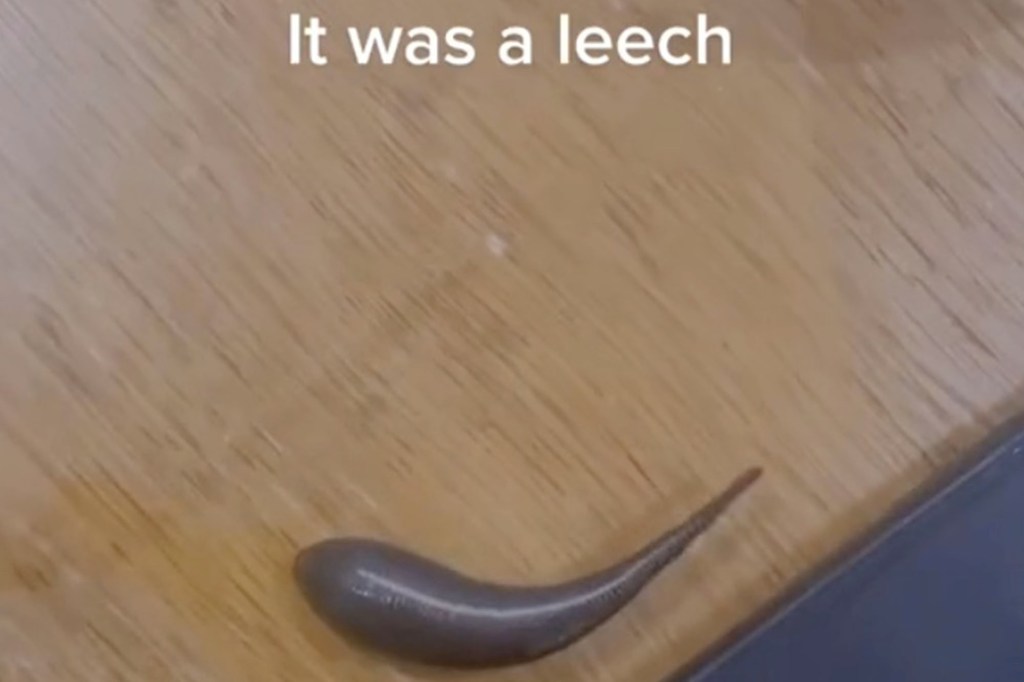 The bride suspects that one of the biggest leeches had sucked her blood for approximately three hours. TikTok / madalyn.wise

“There was one underneath my foot, one in the pit of my knee — the armpit of my knee — and there was another one crawling up my leg,” added Wise, from Queensland, Australia. “The really, really fat one was the one that was in my knee pit. And it would have been there for like three hours.”

Wise explained that she and her new hubby tied the knot on the Gold Coast in the hinterland region of Australia, where it had profusely rained in the weeks ahead of their nuptials.

And after the ceremony, the freshly-hitched sweethearts opted to take wedding photos in a field of “long, sludgy grass” in an effort to snap a series of picturesque post-marital shots.

But, unbeknownst to the new wife, she’d picked up more than a few sentimental frames during the photo shoot.

“This is where I think the leeches came into the picture,” said Wise of her bedewed backdrop. Per the Australia Museum, the slinking bloodsuckers tend to nest in damp areas. 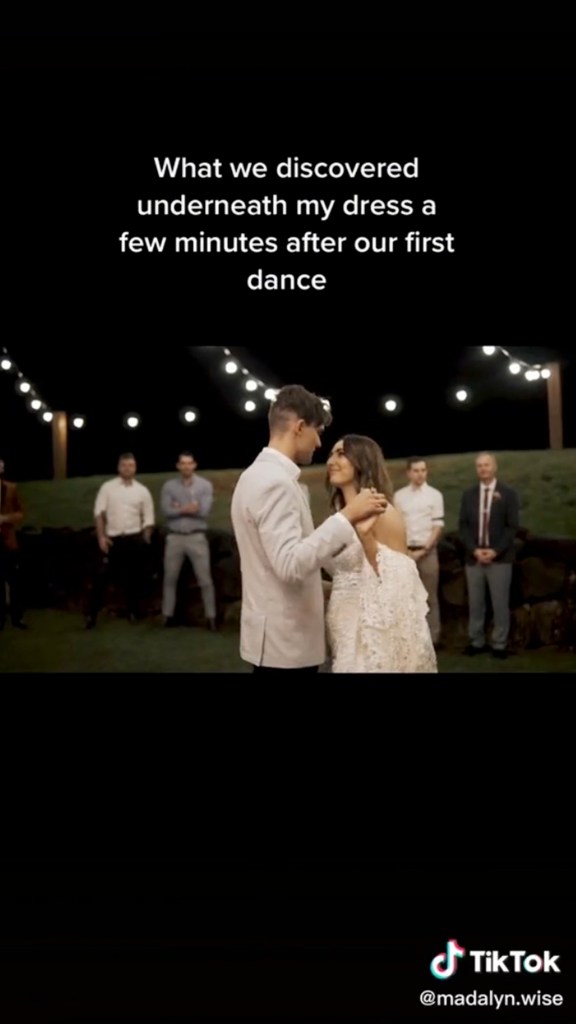 Wise believes that she didn’t feel the leeches biting her because of a numbing agent the worms release through their saliva. TikTok / madalyn.wise

“[The biggest leech] was [on my leg] from the photo shoot in the afternoon until our first dance,” she added. “So it was literally on me throughout my whole reception — through dinner and the speeches.”

Wise went on to claim that when she was first made aware of the blood dripping down the skirt of her dress, she initially assumed it was the result of early menstruation.

But when her mother-in-law informed her that leeches, rather than an unexpected period, were the cause of the gush, she admittedly laughed.

However, the slightly inebriated bride’s chuckles were silenced when she saw the heavy flow of blood oozing out of her leg.

“The fat one that was in my video had actually filled up with blood and dropped off my leg on the dance floor, which is why so much blood started to come out of my dress,” said Wise, adding that, due to the swollen leech’s size, she estimated that it’d been sucking her blood for about three hours.

“That leech was so thick — he was thick,” she continued. “And when they get that thick, it means that they’ve literally filled up. Like, that leech had met its capacity and had filled up and dropped off.”

And as for why she didn’t feel the uninvited wedding guests noshing away at her insides, Wise said: “When leeches latch onto you, they release a numbing agent [through their saliva].”

Researchers have yet to determine an anesthetic in the segment worm’s spit. However, analysts have found that a leech introduces an anticoagulant, or a blood thinner, into its source — rending its bite virtually painless, and allowing the bug to furtively feed on its victim’s blood. 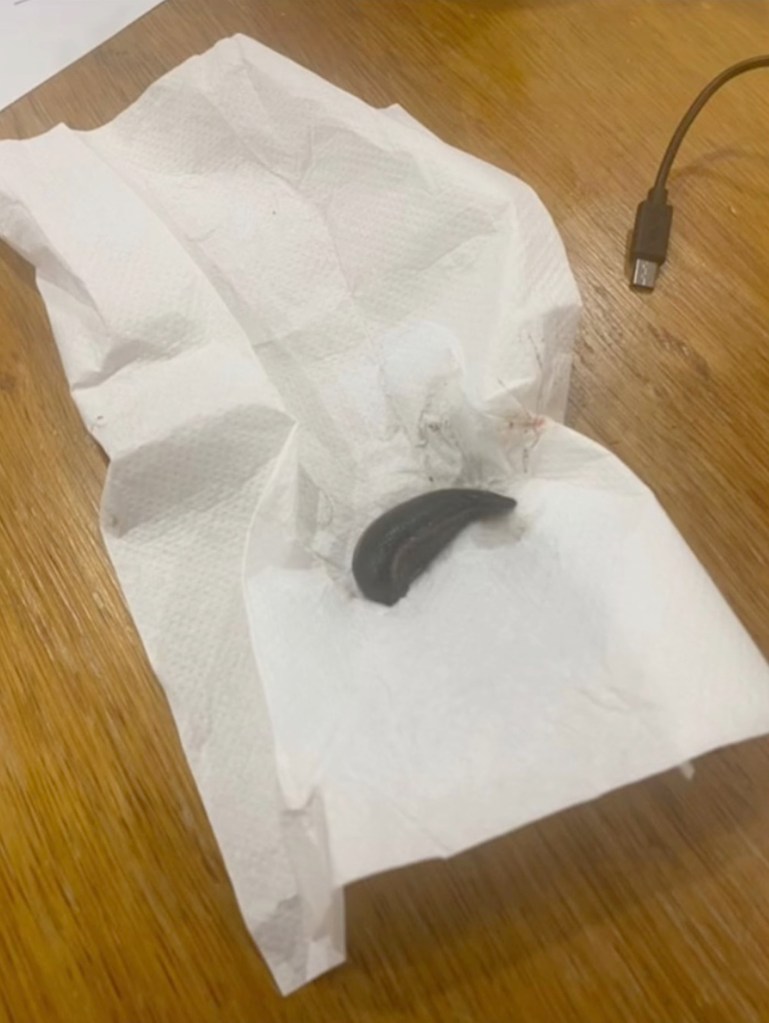 The leech was so engorged that it ultimately fell off of Wise’s leg and onto her wedding venue’s dance floor. TikTok / madalyn.wise

And luckily for her friends and family in attendance. Wise was the only casualty of the vile attack.

“I was the only one at the wedding who had this leech issue,” she said with a smile. “None of my guests had any leeches on them. Literally, none of the staff. No one had a leech but me.”

She went on to praise her wedding photographer and coordinator for dabbing out all of the bloodstains on her dress with a sponge and a mixture of water and baking soda.

And the groom, unaware of his wife’s gory mishap, was immediately called off of the dance floor and into the dressing room, where the wedding workers helped apply first aid to her wounds.

“He stayed with me the whole time this was happening, and he was really supportive,” said Wise. “But I’ll never forget when he first came in and saw me,” she added, conceding that the entire ordeal was extremely “shocking.” 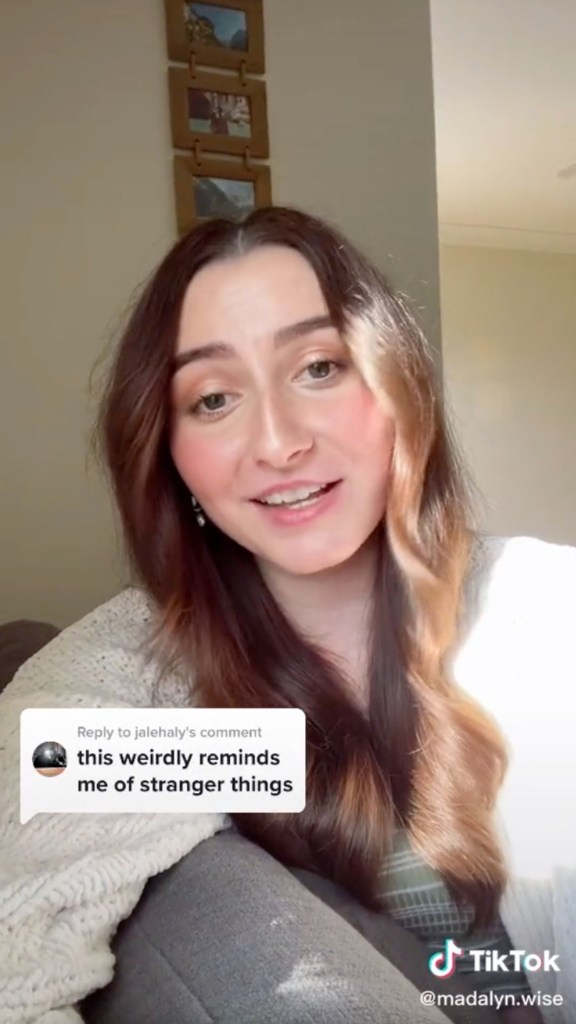 “New fear unlocked,” penned one viewer. “Australia looks beautiful but it’s things like this that make me not want to go,” exclaimed another.

But Wise, despite her icky incident, digitally defended the beauty of her motherland against leech-wary naysayers.

“Please do not take Australia off tour bucket list because of this,” she urged in a separate video. “This was a complete one-off, random, unlucky thing that happened. It does not happen every day.”

And when onlookers likened Wise’s freeloading intruders to the sluggish monsters featured on Netflix’s “Stranger Things,” she joked: “This is actually a promo for the new season.”

Her cheekiness aside, Wise assured audiences that her wedding celebration peacefully resumed after the bloody fracas.

“We ended up finishing off the night dancing and mingling with guests,” she said. “I was showing everyone my bandaged leg, and I ended up putting my dress back on because all the stains were out.”