Emma Thompson’s unconventional wedding dress to marry her first husband, Kenneth Branagh in 1989, was very of the era. (Getty Images)

Celebrities tend to pull out all the stops for their weddings, including multiple outfit changes and after-party options. But occasionally, a celebrity bride will forego tradition entirely to opt for an unconventional outfit choice.

And it’s not just a modern trend, either. Celebrity women in the spotlight have been going against the grain for years.

From Elizabeth Taylor to Emily Rajkowski, here are 13 brides who wore unconventional outfits on their wedding days. 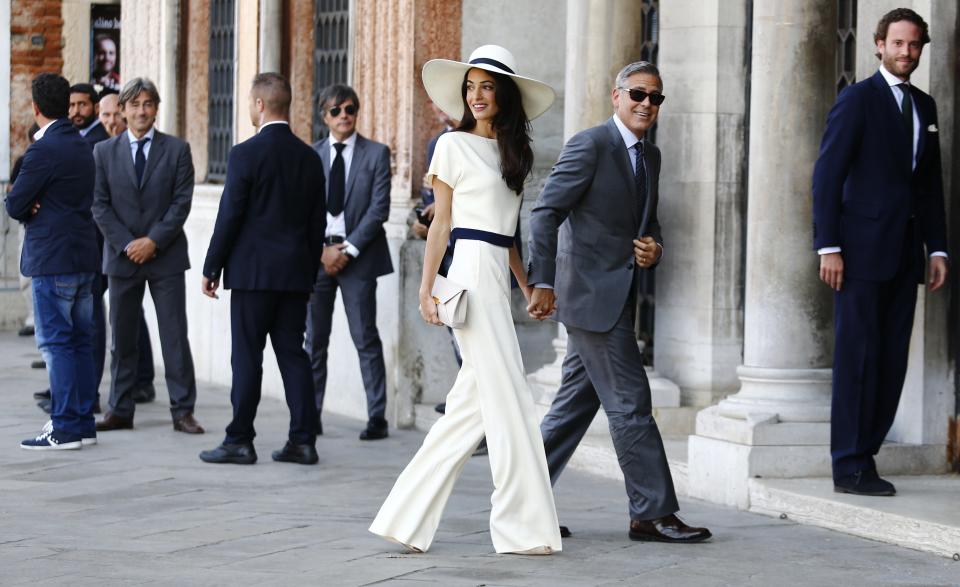 Amal Alamuddin chose a chic Stella McCartney white jumpsuit and wide-brimmed hat for her civil ceremony wedding to George Clooney at the Cavalli Palace in Venice.

Emily Ratajskowski married her husband Sebastian Bear-McClard in 2018. The model and actress forewent a traditional white dress and sported a simple mustard yellow co-coordinating trouser suit from Zara and a wide-brimmed black hat with a veil for the intimate courthouse ceremony at New York City Hall.

Lily Allen broke with tradition for her 2020 Las Vegas wedding to Stranger Things star David Harbour by wearing a short Dior blazer dress, which she paired with black suede platform heels and a veil. The British singer later showed snaps of the couple getting In’n’Out burgers with her two daughters, and shared a snap of her donning a leopard print Ganni coat over her wedding dress. 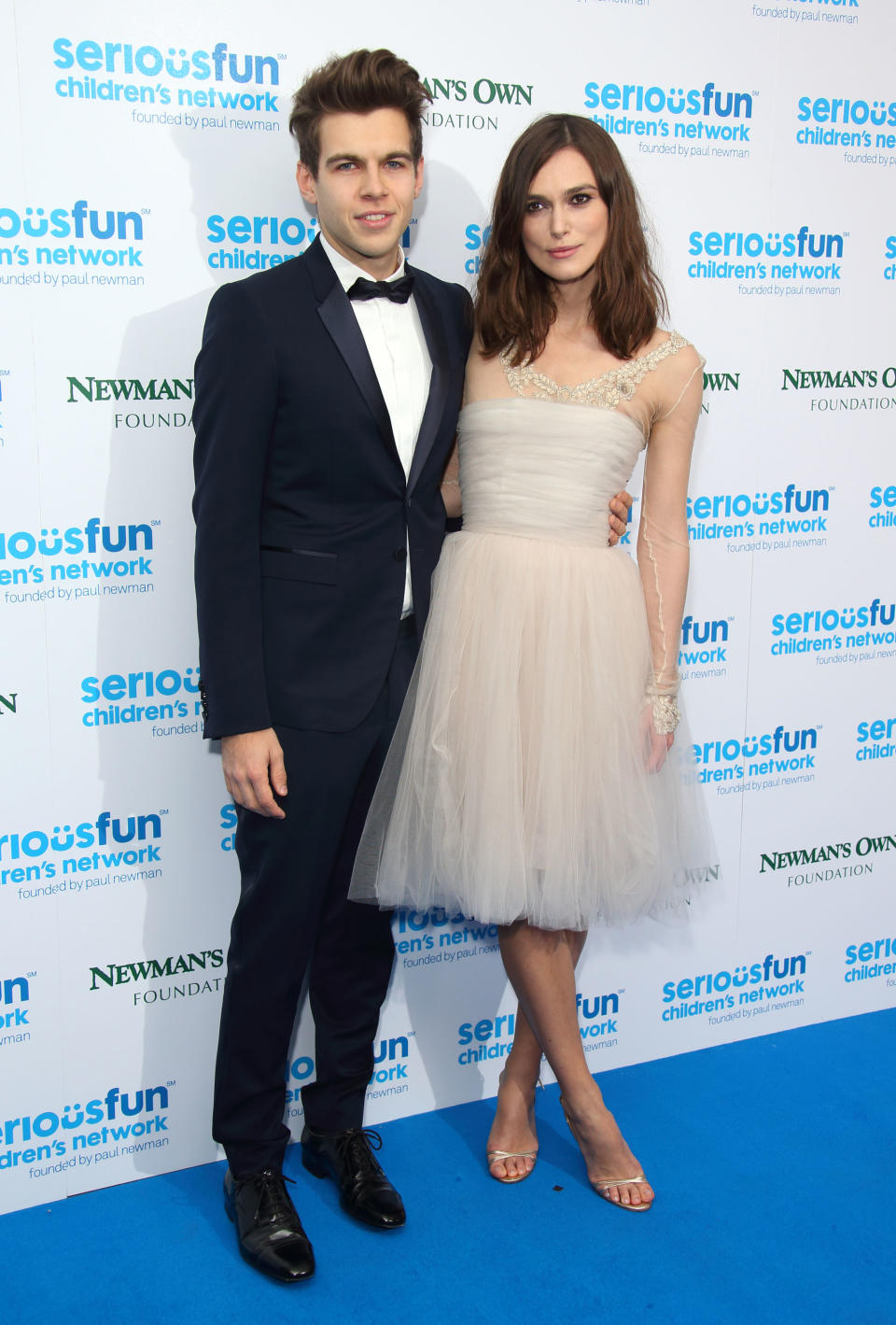 Keira Knightley not only wore a stunning unconventional short, strapless, chiffon, Chanel number for her 2013 wedding to James Righton, complete with Chanel cardigan and Ray-Ban sunglasses, but it was also a vintage piece that she had re-worn for the occasion.

The dress, from Chanel’s Spring 2006 Haute Couture collection, reportedly first made an appearance in 2008 at a pre-BAFTA party red carpet and Knightley later re-wore it to the SeriousFun London Gala in December 2013. 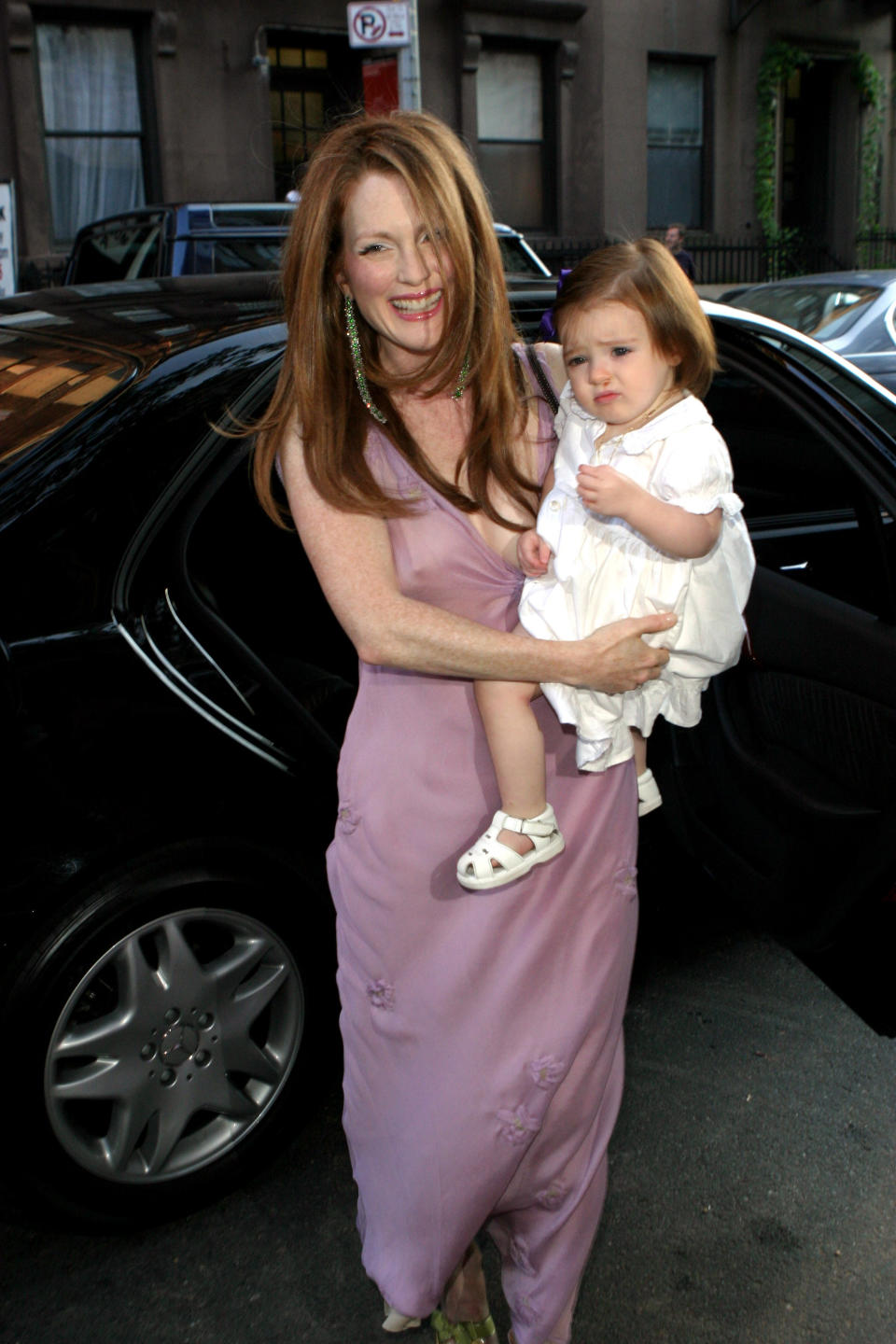 Julianne Moore married Bart Freundlich in 2003 in an intimate ceremony in New York City. The A-list actress wore a silk mauve slip dress for the garden wedding in their home. 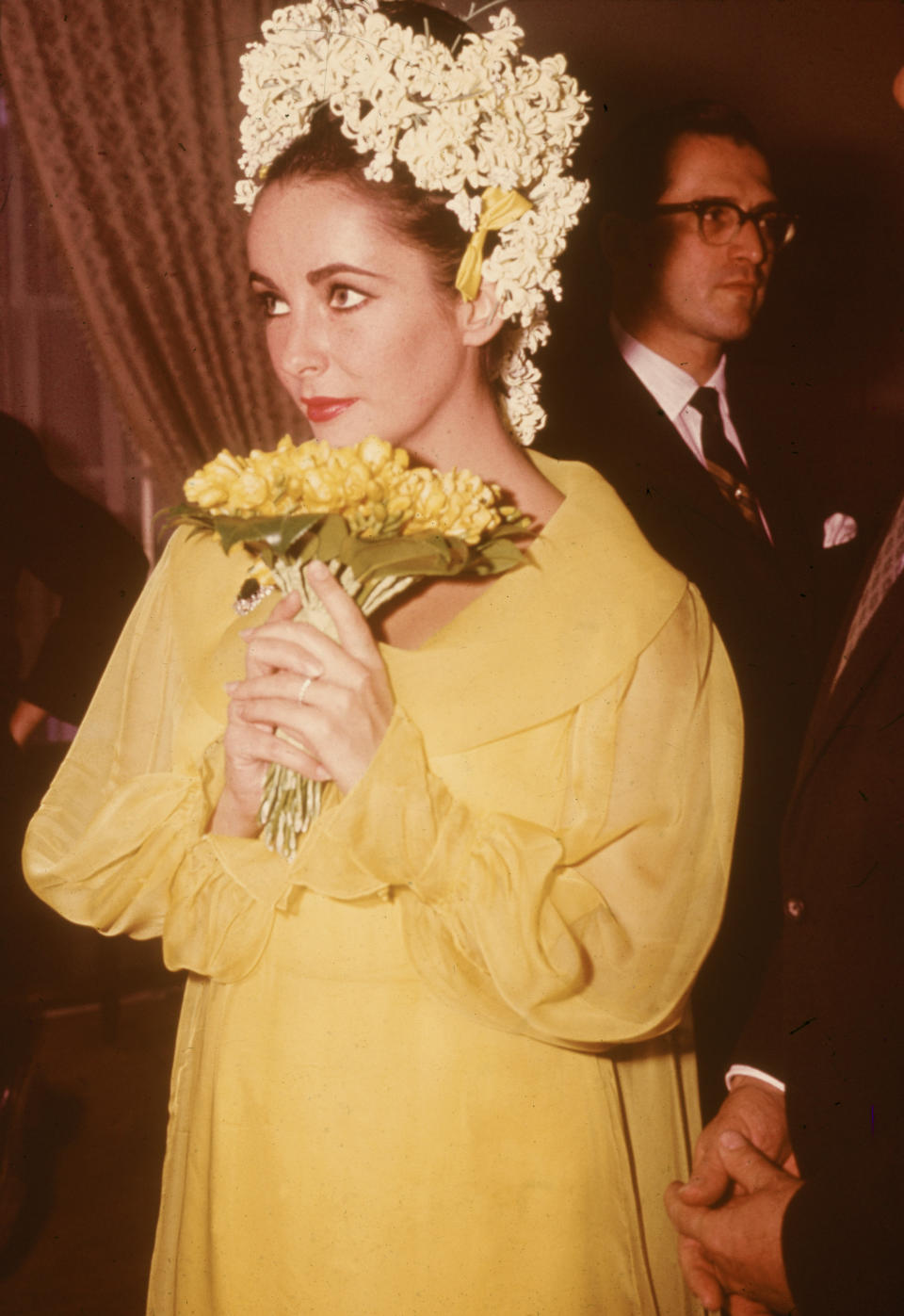 Taylor’s now-iconic canary yellow babydoll dress worn to her first wedding to Burton in 1964, was aptly created by Irene Sharaff, the costume designer on Cleopatra, the film on which Taylor and Burton met.

A year after divorcing from their first marriage, Taylor and Burton reunited in 1975 to wed a second time in Africa where Taylor wore a Gina Fratini dress in ombré shades of green, yellow, and pink. The famous dress was later auctioned off by Christie’s in 2011 for a whopping $62,500. 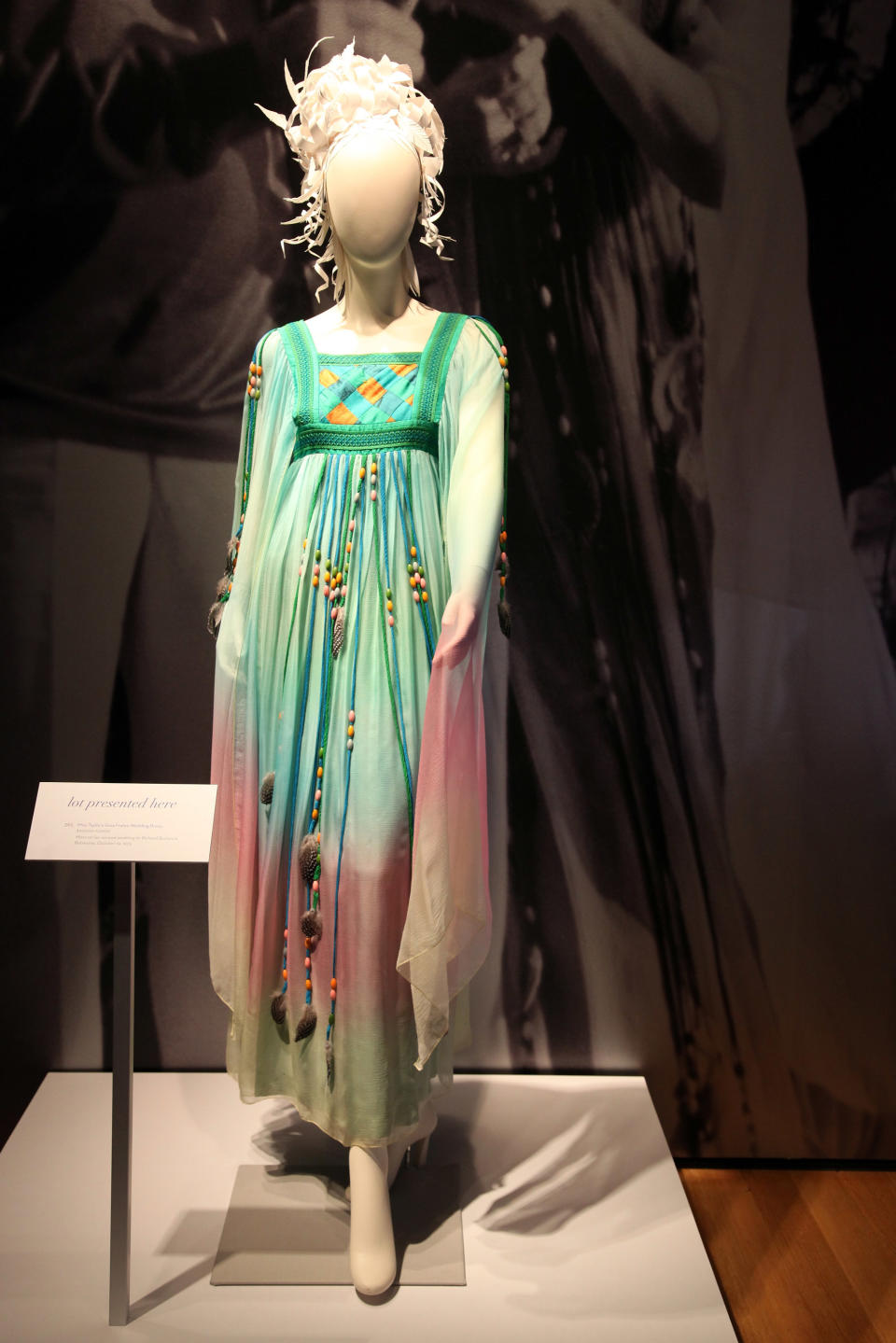 The Gina Fratini wedding dress worn by Elizabeth Taylor’ in her second wedding to Richard Burton was later put up for auction by Christie’s. (Getty Images)

For her 2013 wedding to Dax Shepard, Kristen Bell skipped the gown and the white altogether. Instead, the actress opted for low-key black trousers and a top in which to tie the knot, complete with era-defining sparkly statement necklace.

Whilst actress Angelina Jolie still technically wore a white dress for her wedding to Brad Pitt in 2014, it gets an honourable mention for its personal message. The dress by Luigi Massi, the master tailor at Atelier Versace, featured hand-drawn pictures embroidered onto the A-line skirt and train by her six children: Maddox, Pax, Zahara, Vivienne, Shiloh and Knox. 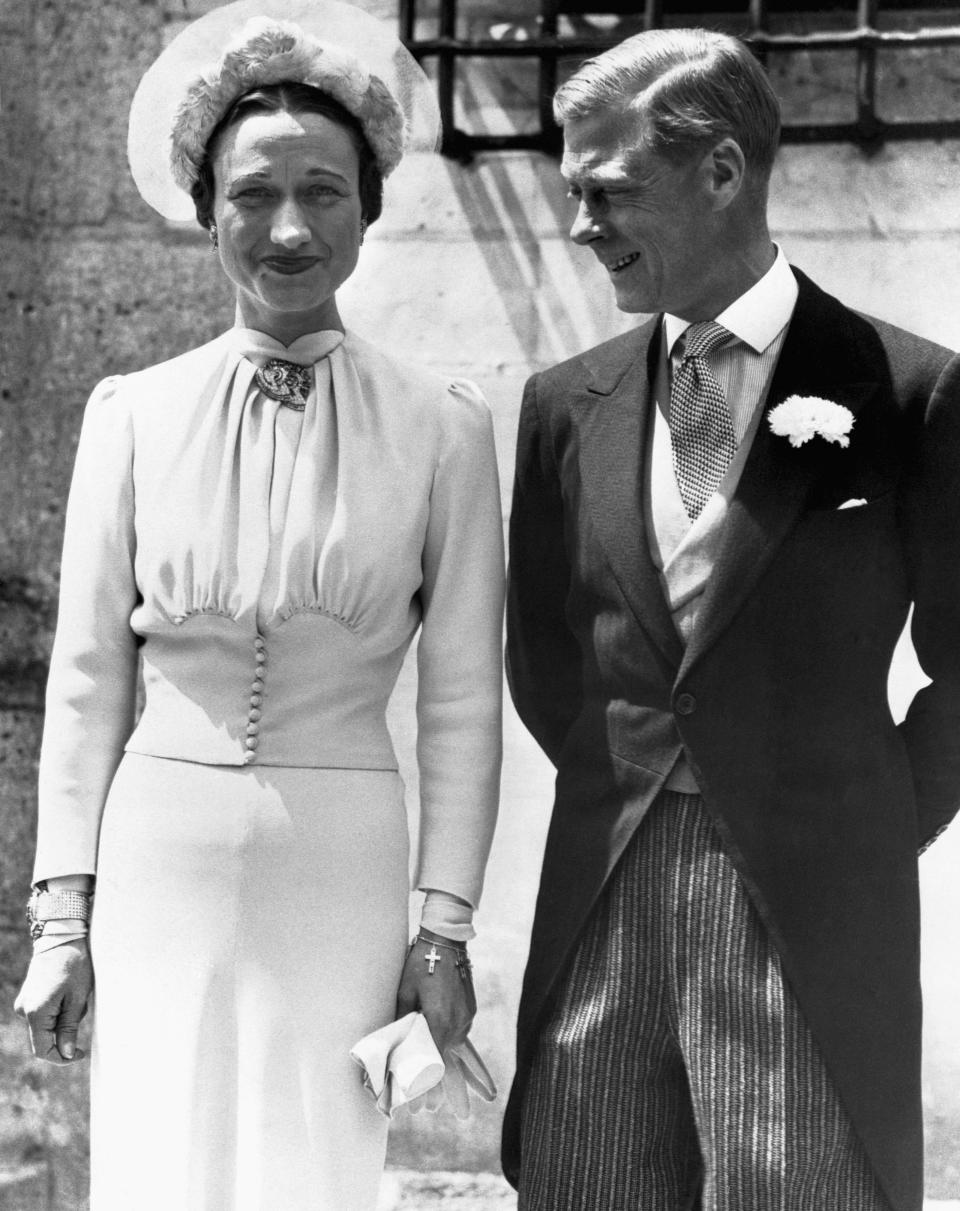 For her 1937 wedding to the Duke of Windsor, the former King Edward VIII, American divorcee Wallis Simpson wore a Mainbocher dress that was the bride’s signature shade of pale “Wallis Blue”, which reportedly matched her eyes.

Ozark star Julia Garner always wanted to wear a trouser suit if she had a civil ceremony wedding. So when her and husband Mark Foster settled on marrying in New York City courthouse, the decision was already made. “I love pants suits, and I always thought that if I were to get married in a courthouse, I wanted to wear one,’”Julia told Vogue. “I wanted a Carrie Bradshaw moment.”

Sofia Coppola wore a lilac, knee-length, chiffon dress by the late Azzedine Alaia for her wedding to Phoenix front man Thomas Mars in 2011 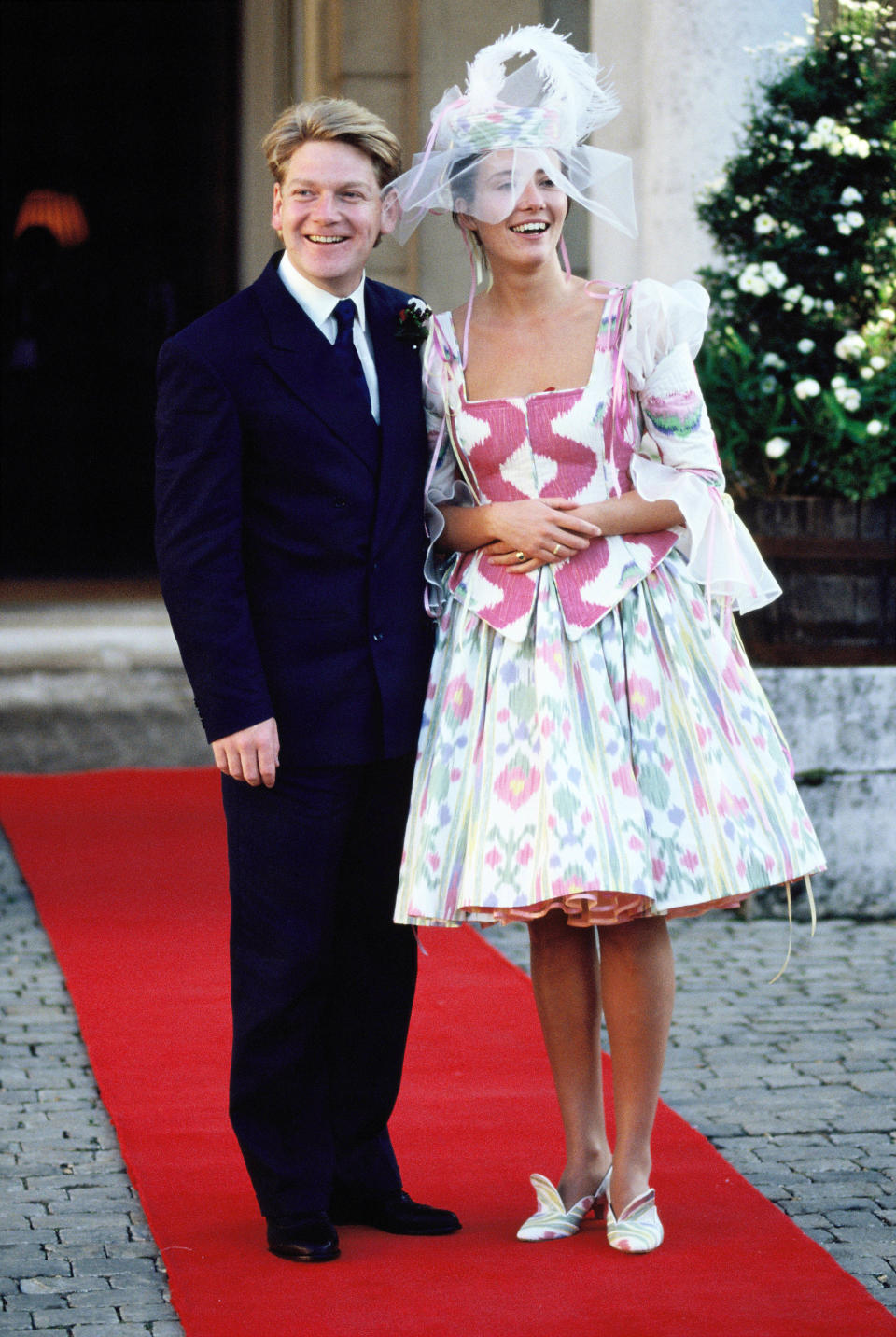 Emma Thompson turned heads in a vibrant puffed-sleeved, patterned knee-length dress, complete with a matching hat, for her wedding to Kenneth Branagh in 1989.