Fashion designer Virgil Abloh has died after suffering from cancer, it has been announced.

The 41-year-old, who was the creative director for Louis Vuitton and Off-White, had cardiac angiosarcoma, a rare, aggressive form of the disease, according to an announcement on his official Instagram page.

“We are devastated to announce the passing of our beloved Virgil Abloh,” it said. “He chose to endure his battle privately since his diagnosis in 2019, undergoing numerous challenging treatments, all while helming several significant institutions that span fashion, art, and culture.

“Through it all, his work ethic, infinite curiosity, and optimism never wavered. Virgil was driven by his dedication to his craft and to his mission to open doors for others and create pathways for greater equality in art and design. He often said, ‘Everything I do is for the 17-year-old version of myself,’ believing deeply in the power of art to inspire future generations.”

Abloh redefined the idea of the modern fashion designer, adding DJ, artist and furniture designer to his creative arsenal. After training as an architect, he started designing clothes in 2012. His first design, a screenprint on a Ralph Lauren rugby shirt, set the tone for his future work: a postmodern art stunt cum fashion piece. Collaborating with everyone from Nike to Ikea, Perrier and Mercedes-Benz, he took fashion into arenas where it had not gone before, cross-pollinating it with other fields. The fashion purists were not amused; he told the Observer in 2019, “When I was showing in fashion week, people were saying, ‘That’s not fashion.’” In 2013 he founded his own label, Off-White, and was appointed head of menswear design at Louis Vuitton in 2018. He was the first black designer at Vuitton and the most visible black designer in fashion.

Abloh was also a hugely visible figure in rap, designing the album covers for Kanye West and Jay-Z’s joint album Watch the Throne, as well as West’s My Beautiful Dark Twisted Fantasy among others and covers for Pop Smoke, Westside Gunn, Octavian and Lil Uzi Vert. He worked closely with West before becoming a fashion designer. In an interview, the rapper had said of Abloh: “I have all these ideas and Virgil is able to architect them because he is an actual architect.” 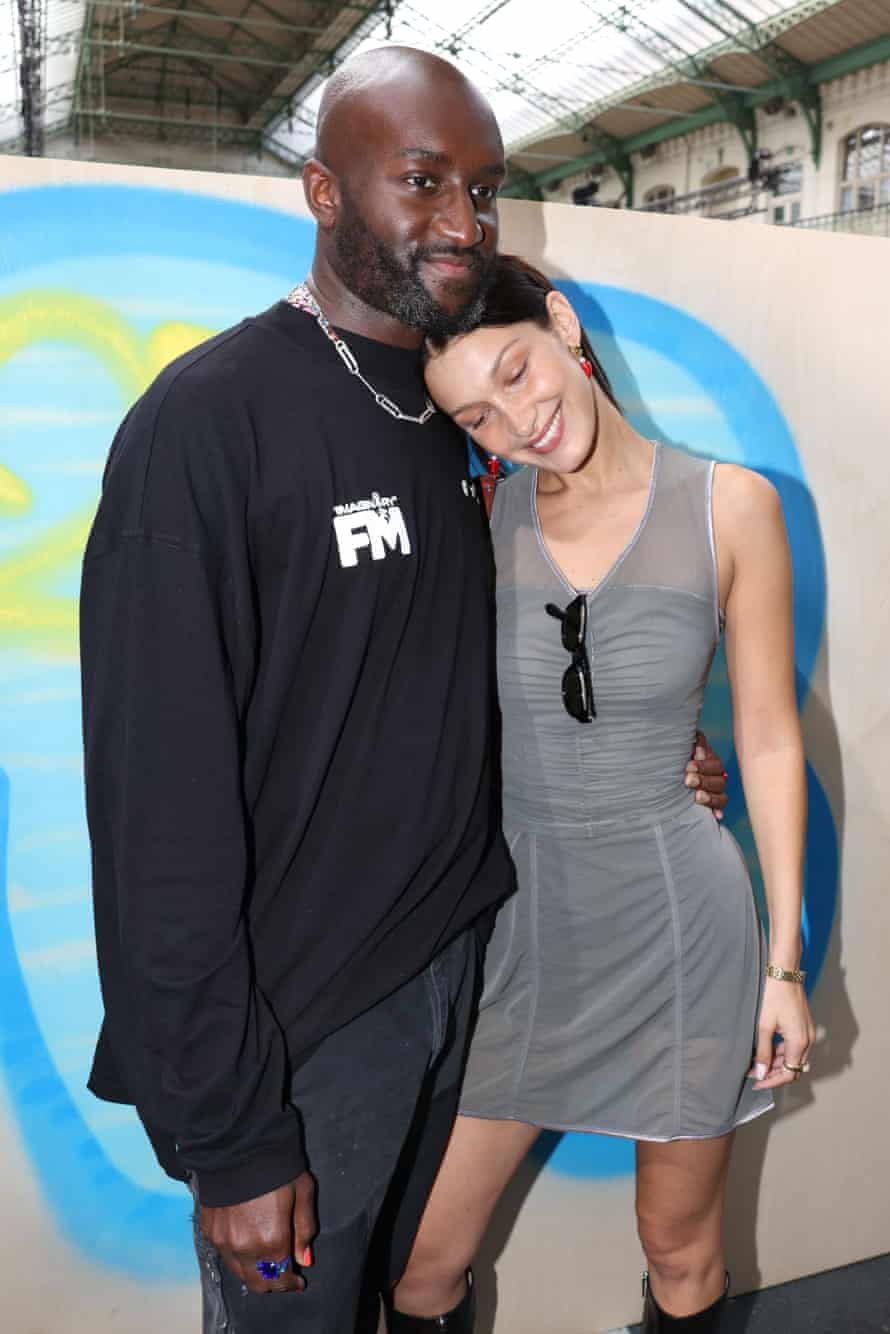 Gigi Hadid, Hailey Bieber and Justin Timberlake were among the stars paying tribute to the “once-in-a-generation creative mind”.

Supermodel Hadid shared a string of photos of them together and wrote: “I am heartbroken by the loss of my dear friend, and a friend to the world, Virgil Abloh. He was 1 of 1 … You will continue to inspire me every day, V. I feel blessed and honoured by every moment.”

Timberlake wrote: “What can you say when a force like Virgil Abloh is taken too soon?
You gave the world so much, in so little time. And created with intensity … knowing better than the rest of us that life is short, but anything is possible. I’m honoured to have known you. Thank you for sharing your gift with us.”

Bieber shared photos of herself with Abloh in the wedding dress he designed for her wedding to Justin Bieber. “He was someone who always brought life, charisma, love and fun to any situation, and every room he walked into. A once-in-a-generation creative mind that is so rare and I’ll never forget his impact. We love you, Virgil.”

British Vogue editor Edward Enninful called Abloh “a giant among men”.
He wrote: “Virgil Abloh changed the fashion industry. Famously prolific, he always worked for a greater cause than his own illustrious career: to open the door to art and fashion for future generations, so that they – unlike himself – would grow up in a creative world with people to mirror themselves in.”

Bernard Arnault, chief executive of LVMH, owner of both Off-White and Louis Vuitton, said in a statement: “Virgil was not only a genius designer – a visionary – he was also a man with a beautiful soul and a great wisdom.”

He is survived by his wife Shannon and his children Lowe and Grey.