There are people who knew they wanted to work in the funeral industry from an early age, but I was not involved until I was in my late 40s. Before that, I worked in finance between China and the United States. It was incredibly fun and I really enjoyed the experience, but when I hit my late 40s, I realized I had to do something that had true meaning; to give something back to the world and allow younger generations to have a world to live in.

Washington State, where I live, was the first place in the U.S. to legalize terramation in 2019. Terramation is the composting of human bodies after death. As news was coming out, I was sitting with my mother who is in her late 70s, and I was saying how wild it was. She said it wasn’t crazy at all, and that she would do it. She had two friends with her from New York at the time, and they said they would too. My family is not particularly funeral and death focused, so it was a very unusual discussion.

I began to think about it. We’re all going to die and we need to have a means to make sure our last act on this planet is one that is sustainable and gives back. That’s just common sense. I realized that the disposition methods we have, cremation and burial, are both unsustainable environmentally. A single cremation typically uses almost 30 gallons of fuel and emits an estimated 540lbs of carbon dioxide into the atmosphere, and a person’s ashes are not useful to the earth. Conventional burial, meanwhile, takes up a huge amount of space and commonly uses embalming fluid with formaldehyde, a known carcinogen.

I realized that terramation is something that could well sweep the world. So I built an “Ocean’s 11” style team. It was the most remarkable group; mechanical engineers, electrical engineers, soil scientists, funeral directors and embalmers, general contractors and machinery manufacturers, and they all had to develop this science and technology together during COVID when they couldn’t sit next to each other. It took two years and during that time, we tested our terramation process on pigs. We knew we had to perfect it and a pig is quite a bit harder to compost than a person; a 200lb adult is likely to be 6ft tall, while a 200lb pig might only be 2ft tall and their skin is very thick. If you’re able to compost a pig, you can certainly compost a human. We went through a lot of trials, and then we built a 12,000 square foot facility and officially opened in June 2021.

In a nutshell, terramation is the transformation of human remains into soil. Our system uses 1/10 the energy of cremation, and gently transforms a human body, over a 60 day period, into material that goes straight back into the earth and aids the cycle of life. Our system is what we call “in vessel.” We created a vessel that is 8ft long and 3.5ft tall by 3.5ft wide. We place the body inside a sealed vessel along with a blend of organics, which includes alfalfa straw and sawdust. With the addition of oxygen flowing through the vessel, microbes in our body that digest the food we eat help transform us into earth. Our process completely transforms the body in one month, and during the second month we let the soil sit and breathe. We don’t open the vessel again until the body is completely transformed. The soil that goes back to the family is sweet smelling; it is like the compost you would see and plant in your yard.

Naturally, there were concerns about the quality of soil we were producing, so we were required by state regulators to test the soil of our first 20 terramations, but we were also quite grateful for that, because we have to show the world that what we’re doing is scientifically sound and healthy for the environment.

The miraculous part of this is that I didn’t know how powerful it would be. It’s been an unbelievable journey. We have completed 40 terramations to date, and when someone calls us, it’s often the person who is dying themselves. They will say that they are really excited about their terramation. We had someone call recently who very matter-of-factly said that she would be dying the following day. She explained she was leaving with Death With Dignity and asked us to come and get her, and keep an eye on her son, because it would be a long day. We got a call the next afternoon.

In the beginning, I also thought that in cases where people who had lost loved ones called us, we would collect their deceased loved one and deliver soil back to them. These people were busy and in great distress and understandably, might not want to spend extended time at our facility.

Our experience has been very different. We are finding that families come to us and stay with us. If a mother loses her son, she’ll come every day and sit beside the terramation vessel. People began asking us if they could put flowers in the vessel too and sit with it. We said yes. Others asked if they could add the top layer of their wedding cake, or love letters and we said yes to that too. If you can eat it, or it’s organic, we are happy to include it in the vessel. We have had two veterans with us and their wives asked that they be covered in flags. One woman had a homemade blanket placed on top of her. 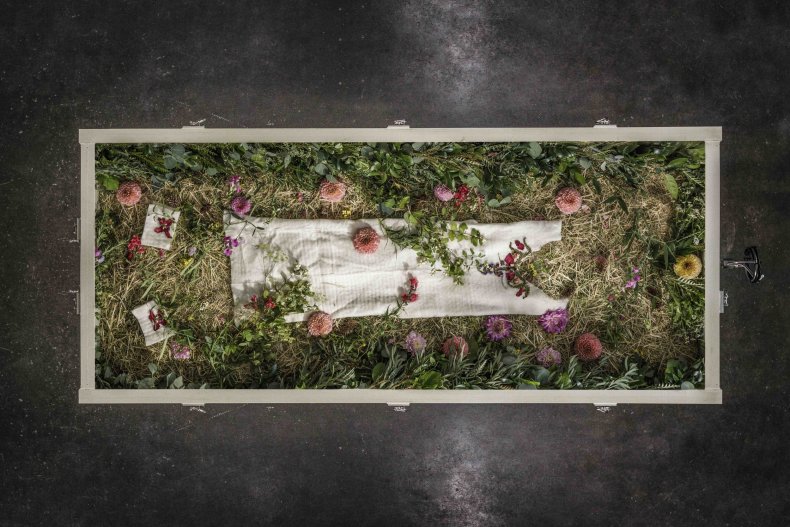 A Return Home vessel with the organic materials that help the human body compost, as well as examples of personal touches that families can add, such as flowers and blankets.
Return Home

People now decorate the vessels with things that are beautiful and precious to them. Some of them come every day to visit during the 60-day process. There is a man who comes with two cups of coffee; one for himself and one for his partner.

something that the world can do, so it has to hit a price point that is reasonable. The entire service currently costs $4,950 and we are currently able to coordinate with funeral homes across the U.S. and Canada to arrange for the deceased to be transported directly to our facility.

We want to make sure the world can do this en masse, because we have found that a lot of the people coming to us have been younger. Our first five terramations were with people under the age of 40. In one way, it was quite startling, but in another way, we realized that our younger generation is going to teach us how to die better. The younger generation understands the climate crisis in a way that maybe a generation above hasn’t quite grasped yet.

This work has been the most transformative thing I’ve ever done. The most amazing part is that when a family or individual comes to us, they don’t talk about money, and they don’t talk about how they wished they had worked harder in their job. They never talk about power or possessions and they become utterly laser focused on the people around them. They seem both grateful for the ones they love and regretful about the ones they have lost. If there is something they are sad about, it’s not telling someone they loved them. 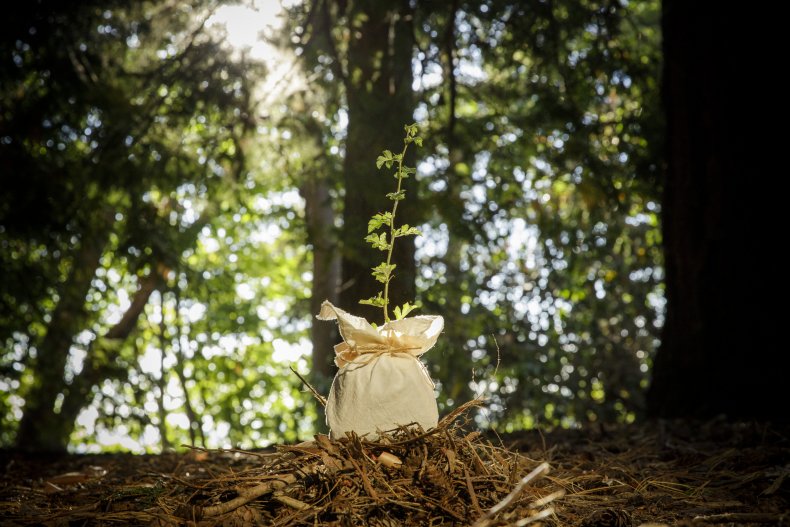 Micah Truman founded a company in Washington State that composts human bodies. The 60-day process is low energy and the resulting soil is returned to the families.
Return Home

Some people have divided the soil up and passed it to dozens of family members. Others have gone to parks and arboretums and planted flowers, shrubs or trees. One family planted an entire stand of trees. We have also purchased an eight acre greenbelt parcel, so those who can’t take the full amount of soil have the option to scatter some of it there.

I think this is going to be a process and take time to grow. One of the very interesting things for us is that we have “at need” which is for people who have lost a loved one and need our help immediately, and we have “pre-need” which is for a guy like me. It’s where you pre-purchase the service so it’s there if you need it. We’re already up to around $300,000 of “pre-need” purchases alone. What we are seeing is that the younger generation are taking this up.

In many ways, terramation is the antithesis of an impulse purchase. It is a carefully considered decision, it’s very consensus driven, and it takes discussion. We’re talking about dying, which is a conversation that many people don’t want to have. In a nutshell, it’s going to take time for people to think this through and decide if it’s for them. But, I think that anyone who hears about this, is going to be thinking about it for a long time afterwards.

Micah Truman is the founder and CEO of Return Home, a terramation service based in Washington. To find out more, visit returnhome.com.

All views expressed in this article are the author’s own.

As told to Jenny Haward.