Henry and Clare’s wedding day has finally arrived on The Time Traveler’s Wife, and with it comes a lot of stressed-out time-hopping. 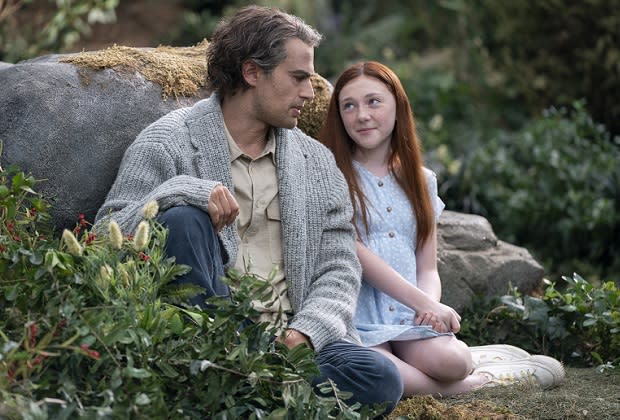 Sunday’s season finale begins with 28-year-old Henry traveling to his and Clare’s future home, where he finds a video camera and clothes waiting on a wheelchair. Meanwhile, 42-year-old Henry — who hates video because “nostalgia for a time traveler is a bear trap” — winds up visiting 14-year-old Clare, who notices that he didn’t put on the shoes she left out for him, but she doesn’t realize why. Henry tears up as he hears “Get Me to the Church on Time” playing in the distance and explains that it brings up memories of Shoe Polish Day.

As the wedding approaches (and Clare’s parents set out to make it The Event of the Season), Henry’s stress levels increase and he begins traveling to the future more and more. During one trip, he sees the wheelchair in the closet and Clare reaching for a tissue as she watches their wedding video. But before he can call out to her, he’s snapped back to his time.

For 28-year-old Henry, this happiness that he’s found with Clare is foreboding. She believes that love is what gives meaning to life, but Henry argues, “Love is what gives hope to mortals. It’s the cruelest thing I know.”

With five weeks to the wedding, Henry finally introduces Clare to his dad, who marvels that she’s not blond and Henry actually knows her last name. After the two get to know each other, he says to Clare, “You seem quite lovely. What on Earth is your interest in Henry?” She replies that he’s good in bed, to which his dad retorts, “I know he thinks so.” (Mic drop, Dad!)

Later, Henry travels to the future home again, but this time, it’s empty. He watches as his 30-year-old self and 22-year-old Clare tour it for the first time. Of course, he already knows this house is the one, so he shouts a reminder to the “ghost” watching that the lottery is tonight to help pay for it. 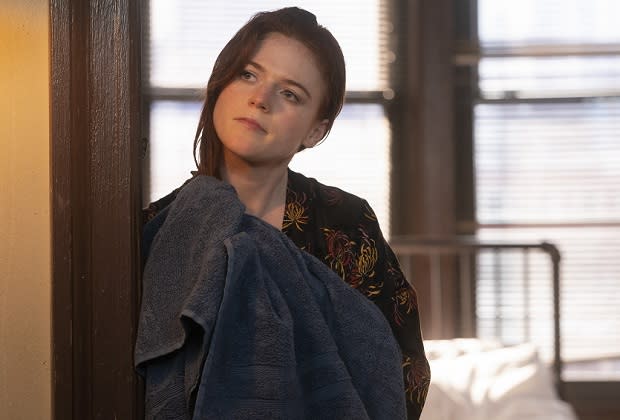 At four weeks to the wedding, Henry travels to the house and finds Clare crying in bed, with a small keepsake box by her side. When he finds himself back there at three weeks, he almost gets a glance inside the box before he gets pulled away. Back in the present, Henry doesn’t tell Clare about where he’s been going, even after she remarks that the trips have become almost nightly.

Given the increased frequency of his time traveling, Henry visits his old friend Ben with the hopes of getting drugs to stop him from disappearing during his own wedding, which is now just two days away. Henry takes something Ben calls “morphine plus” and passes out. Meanwhile, Gomez — who was in the area and spotted Henry — bangs on the door, but Henry has already vanished. His time travel takes on an erratic, frantic quality as he jumps to the future again and sees his older self and Clare fighting, then jumps again and sees a young girl approaching him at the house, before jumping to what looks like a funeral wake. Henry winds up back at the house moments after the fight and finds 29-year-old Clare crying in her studio, with a keepsake box of positive pregnancy tests. Henry confronts his 36-year-old self, who reveals that the babies time traveled right out of the womb, so he got a vasectomy. Henry punches his older self, who travels to just seven hours before the wedding.

Henry’s been gone almost all day, so Gomez called his dad, who points out that the Henry that’s shown up is on the older side. Henry asks for shoe polish to hide his grey hairs. He knows he’s not going to make it to old age with Clare, so Henry asks his dad if marrying mom was worth losing her. His dad says it was worth it because of him and tells Henry to give Clare a child if he can’t stay, but it might be too late for that on Henry’s part. 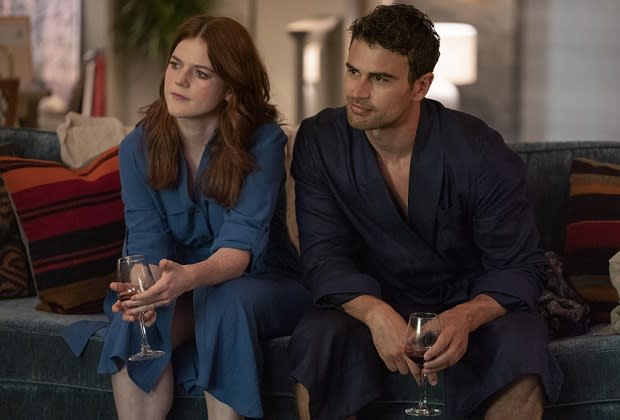 Meanwhile in the future, 28-year-old Henry watches his 36-year-old self marry Clare as she sits by his side. He’s mad at his future self because he and Clare are supposed to make each other happy. She argues that that’s not the point of marriage. “It’s like setting sail into a storm and you know you both won’t make it, so you cling on for as long as you can because you know this is as good as anything every gets,” she says. Excited to finally be the older woman, Clare adds that she misses this young asshole Henry and wonders if chased him away or made him change. Then she asks him to come see her sometimes. (When 36-year-old Henry and Clare get hitched, she says she’s missed that version of him. So the grass really is greener on each side.)

In a mid-credits scene, Henry says that it would be weird for him to visit her. After all, he’s essentially the guy who got a vasectomy, with whom she’s angry. With a small smile, Clare replies, “Not yet you’re not.”

Given where the finale ends — far from the end of Audrey Niffenegger’s novel — The Time Traveler’s Wife is indeed intended as a multi-season show rather than a limited-series adaptation. (For the record, the series has yet to be renewed for Season 2.)

“I had a plan about how many seasons we’d do — not telling you! — and where each one would end and how far you’d take it,” executive producer/writer Steven Moffat tells TVLine. “There is enough juice in the book for more than just one [season]. But at the same time, I would still call it a limited series because it can’t go on forever. It has to stop. We already know a fair bit about how it ends. By Episode 3, you know he’s going to get shot in a forest. You know he’s going to lose his feet at some point. So it’s a story of destiny, I guess. The end is built into the beginning.”

But could the series continue past Niffenegger’s book and explore the story of — spoiler alert! — Henry and Clare’s daughter Alba, who is due to finally get her own book? Moffat hasn’t read the sequel yet (“[Audrey] just finished that book. I think it’s with the editor,” he says), but that doesn’t matter. “This series is The Time Traveler’s Wife,” Moffat explains. “It will not go outside the confines of the book, and we will not change the major details of it. So if you want to know what happens the next two years, go read it.”

What did you think of The Time Traveler’s Wife finale? Grade it below, then hit the comments!

Cristina de Borbón and Iñaki Urdangarin: 25 years of a wedding fueled by lies