Kate Middleton and Meghan Markle have both developed strong individual styles which set them apart from other members of the royal family. Since their own wedding days in 2011 and 2018, both duchesses have maintained a high sartorial standard.

Kate’s Alexander McQueen wedding dress was an elegant lace creation with a classic tailored bodice and long delicate sleeves echoing one of the most famous royal wedding dresses of all time, that of Grace Kelly.

Meghan selected the Paris fashion house of Givenchy to make her wedding dress. The gown was of strict simplicity with bracelet length sleeves, topped with a veil embroidered with all the flowers of the commonwealth plus a California poppy.

Both brides won the praise of the fashion press as they sparkled at the center of the attention on their big days. But what do these stylish royals wear to a wedding when they don’t want all eyes on them?

Newsweek looks at what Meghan and Kate wear as the perfect royal wedding guests.

To the wedding of Prince William’s first cousin Zara Tindall, née Phillips, in Edinburgh—the first major wedding that Kate attended as a member of the royal family—she re-wore an old favorite piece that she had been seen in for at least two other weddings.

The extreme media scrutiny that Kate faced in the wake of her becoming a member of the royal family saw most royal events overshadowed by headlines on her.

The choice to re-wear an old outfit had the effect of not encouraging any new stories about the duchess’s clothes thus leaving the attention where it rightfully belonged, with the bride and groom. Kate has re-worn outfits to many other important occasions where she is not the intended center of attention.

Kate’s gold brocade dress was made by the brand DAY Birger et Mikkelsen and was paired with a large matching Gina Foster Millinery hat.

Wedding of Pippa Middleton and James Matthews, May 20, 2017

For the wedding of her only sister Kate wore a custom dress by the designer of her own wedding gown, Sarah Burton for Alexander McQueen. The mid-length dress in a shade of nude pink was paired with a hat by Jane Taylor and heels by Gianvito Rossi. 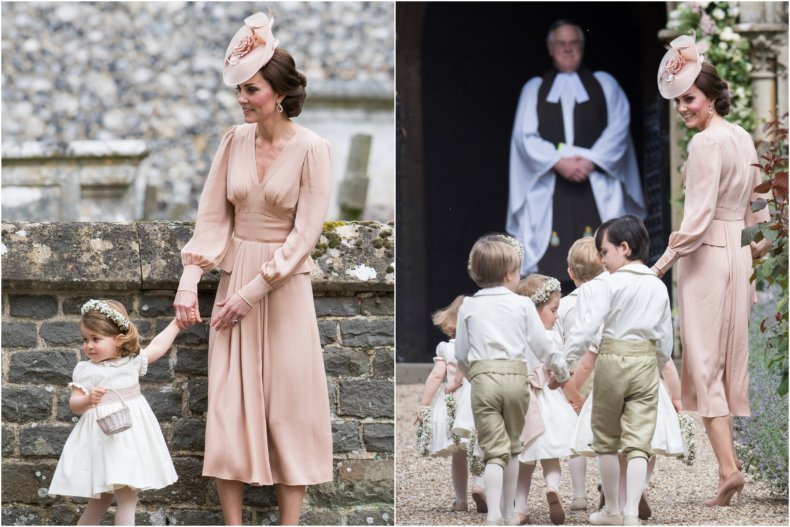 Kate Middleton wore a custom Alexander McQueen dress to the wedding of her sister Pippa, May 20, 2017.
Samir Hussein/Samir Hussein/WireImage

Kate was photographed gathering page boys and flower girls outside the church which included her own children, Prince George and Princess Charlotte, in the quiet Surrey village that wedding was held in. Pippa’s own appearance at William and Kate’s wedding in 2011 caused a media stir as the soon-to-be royal’s sister was accused of drawing attention away from the bride in a stunning pillar cut gown by Alexander McQueen.

The wedding of Prince Harry and Meghan Markle took place less than a month after Kate gave birth to her third child, Prince Louis. 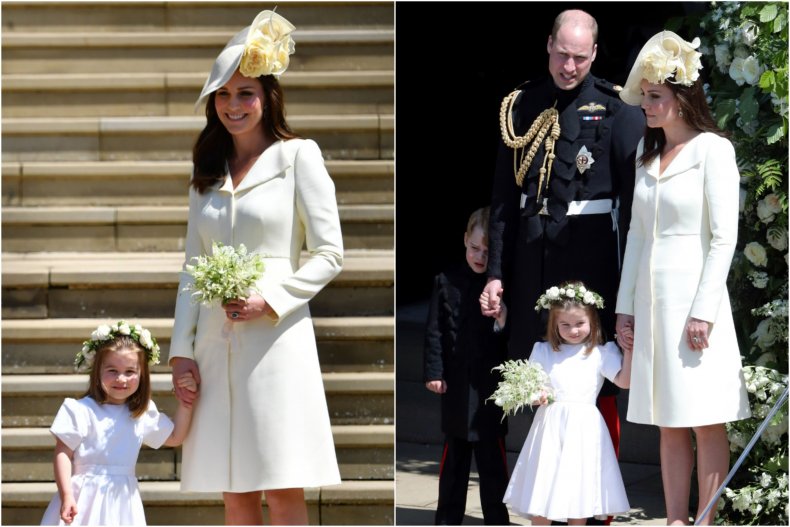 Kate did manage to attend the wedding, looking very well in a primrose yellow coat dress by Alexander McQueen and a hat by Philip Treacy.

Because she again re-wore an outfit for the occasion instead of debuting a glamorous new one, the headlines the following day were less about what she was wearing and more focused on Harry and Meghan.

As a wedding guest Meghan stays true to her own style aesthetic instead of conforming to what is conventional—for a British wedding at least.

For the glorious summer wedding of her husband’s childhood friend, Charlie Van Straubenzee, which happened to fall on the same day as her 37th birthday, Meghan wore a dress from the Canadian brand Club Monaco. 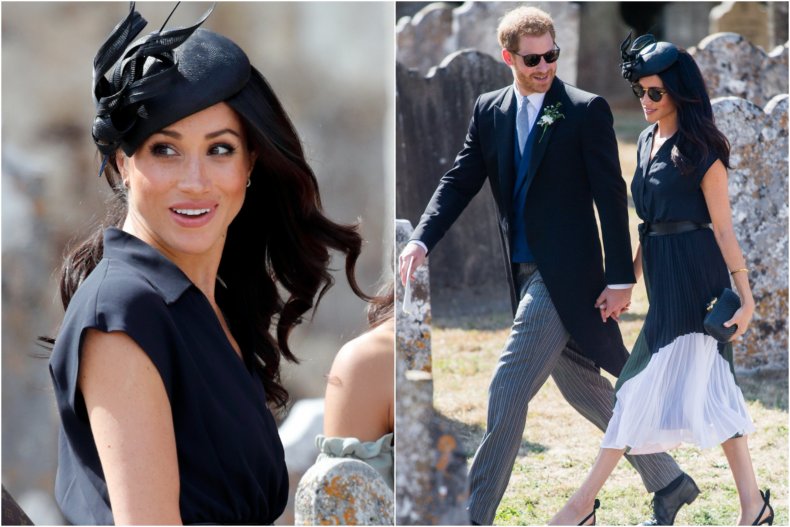 Meghan Markle wore a dress by Club Monaco to the wedding of Charlie Van Straubenzee on the day of her 37th birthday, August 4, 2018.
Max Mumby/Indigo/Getty Images/Samir Hussein/Samir Hussein/WireImage

The dress’s neutral color palette of dark navy, terracotta pink and forest green contrasted against the other guests who were in light summer prints without drawing more focus than was already paid to her. Meghan paired the dress with a belt from the brand Miu Miu, her trusted bow-tie style Aquazzura high heels and hat by Philip Treacy.

For her first royal wedding as a member of the royal family Meghan debuted an elegant bespoke coat and dress from the designer of her wedding dress, Clare Waight Keller for Givenchy. 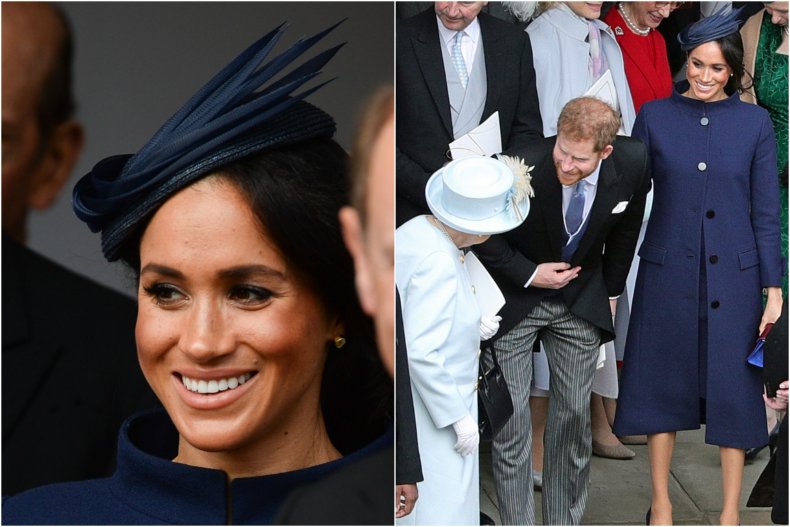 The ensemble worn to the wedding of Princess Eugenie was again in Meghan’s trusted toned-down color palette and did not instantly draw focus among the assembled wedding guests.

Meghan paired her Givenchy ensemble with a hat from milliner Noel Stewart designed to imitate a cockade of feathers. Gold highlights to the outfit were added by a series of statement jewelry pieces featuring faceted crystals from the brand Pippa Small. 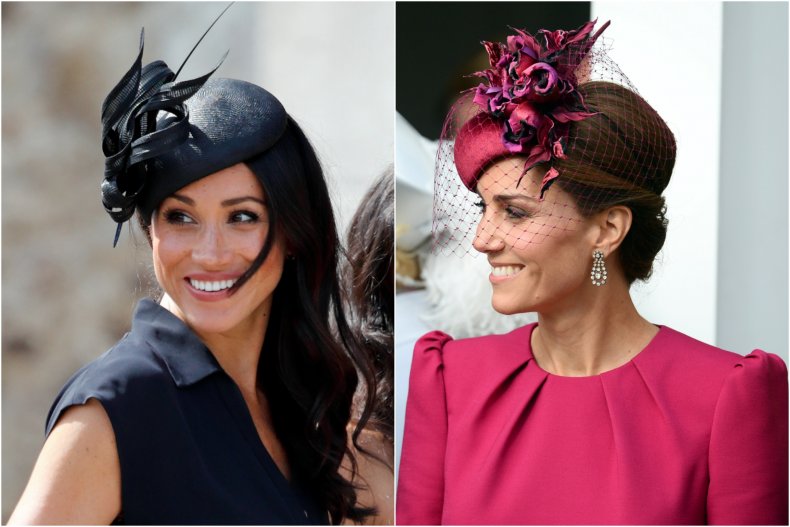 Both Meghan Markle and Kate Middleton have developed ways of dressing to impress as guests at weddings without pulling focus from the all important bride and groom. Meghan (L) photographed August 4, 2018. Kate (R) photographed October 12, 2018.
Max Mumby/Indigo/Getty Images/Pool/Max Mumby/Getty Images

Both Kate and Meghan have found ways to dress to their best advantage in celebration of the weddings of their nearest and dearest without pulling focus from the all important bride and groom.

Through re-wearing pieces debuted on other royal occasions, Kate’s appearance doesn’t overshadow that of the bride in the eye of the press as was demonstrated at Harry and Meghan’s wedding in 2016.

Meghan’s neutral-toned wedding outfits, though they may be new, also ensure that she doesn’t stand out too dramatically against the backdrop of other guests. Together the pair continue to develop their own styles within the confines of the expectations placed upon them as members of the royal family, even after Meghan stepped down with Harry as a full-time working royal in 2020.