Kourtney Kardashian and Travis Barker got married several times, but the reality star once revealed that she was “terrified” of having a wedding. Here’s what Kardashian said about marriage and why her relationship with the Blink-182 drummer is different.

On May 22, Kourtney Kardashian and Travis Barker and Kourtney Kardashian got married in Italy in a lavish ceremony. The famous couple exchanged vows at L’Olivetta, a villa in Portofino owned by Dolce & Gabbana. Their closest friends and family watched as the reality star and the musician tied the knot on a red-carpeted altar surrounded by white candles and red roses.

Kardashian wore a custom Dolce & Gabbana corset lace mini dress paired with matching lace heels and tulle gloves. She also had a long veil embroidered with the Virgin Mary and the words “family loyalty respect,” a reference to Barker’s head tattoo. The Blink-182 drummer matched his bride in a black suit designed by Dolce & Gabbana.

Barker and Kardashian actually got married three times. On May 15, the couple had a legally binding courthouse ceremony in Santa Barbara a few days before the Italian wedding. And they had a “practice” wedding in Las Vegas after the 2022 Grammy Awards on April 3.

Years before she married Travis Barker, Kourtney Kardashian said she was afraid to have a wedding.

In 2016, when Cosmopolitan asked if she would ever have a big wedding like her sisters’, Kim and Khloé, the reality star responded, “A wedding terrifies me.”

She explained the basis of her fears. “I like tradition, I don’t have anything against that. I think it’s more fear of walking down the aisle in front of all those people,” Kardashian said. “I don’t like being the center of attention.”

The Poosh founder also said that she and Scott Disick, the father of her three children and her on-and-off partner for several years, frequently discussed marriage and weddings. “I mean, Scott and I have talked about it many times over the years,” Kardashian shared. “The situation was never right. But I don’t think we would’ve done a big wedding – we would’ve done something really small, just us and our kids.” 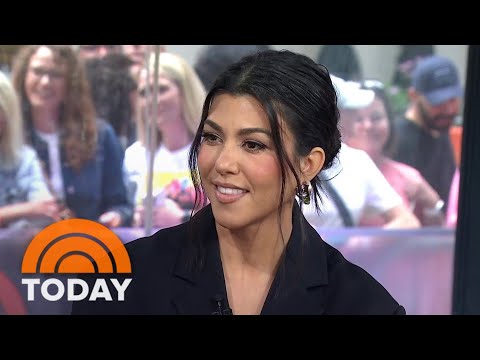 The reality star said married life is ‘easy,’ but things haven’t been so easy in the past

On Sept. 12, Kourtney Kardashian explained what makes her relationship with Barker so different on TODAY.

When Hoda Kotb asked Kardashian what married life was like and how she knew Barker was the one, the reality star said, “I think when it’s kind of easy, and like … It’s so weird, I think of, like, times when things weren’t so easy, and it’s just like, when it’s right, it’s right.”

The mother of three also told Kotb why she decided to take Travis Barker’s last name. “It was a given. Yeah, it was just a given,” Kardashian said. “It wasn’t a thought.”

But the Keeping Up With the Kardashians star isn’t eschewing her famous family name entirely. “So now my middle name is Kardashian,” she explained.

RELATED: 2 of Kourtney Kardashian’s Kids Share the Same Birthday but Are Total Opposites