The dress hanging in this photo is the one Kim Mcinerney found packed in the box she believed contained her wedding dress for the past 40 years. Photos provided

GRAND BLANC — Almost 40 years ago, Kim Mcinerney said she had her wedding gown preserved at a cleaners in Grand Blanc.

But when she opened the box recently to show her daughter, she was surprised to find someone else’s dress inside.

Mcinerney said she had the dress professionally preserved in August of 1982 at Perfect Cleaners in Grand Blanc, which is no longer in business.

“I opened the box last weekend so that my daughter could look at it before she shops for a wedding gown for her June 2023 wedding,” she said. “The box had no window to show the gown. Lo and behold, they gave me someone else’s veil and dress!”

Mcinerney said she is so disappointed she no longer has her dress, but she said she’d would love to find the owner of the dress she has in her possession.

If anyone has information regarding who may own the dress Mcinerney has in her possession, or the whereabouts of her dress, email her at krmmem@aol.com or call 248-709-2293. 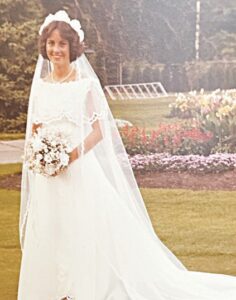 This is a photo of Kim Mcinerney wearing the dress that should have been packed 40 years ago.