A woman has sparked a debate over whether a dress she bought for a friend’s wedding is ‘appropriate’ for the event.

Taking to the British parenting forum Mumsnet, the confused wedding guest said her boyfriend thinks the dress she picked out was ‘inappropriate’ for the day because of the gown’s colour.

‘My boyfriend said he thinks this dress isn’t appropriate for a wedding because it’s red? This is new to me?’ the woman explained.

‘The last two weddings we’ve been to I’ve wore red and he didn’t say anything. So I’m just wondering what peoples thoughts are is this appropriate?’

Taking to the British parenting forum Mumsnet, the wedding guest provoked a debate over whether this red off-the-shoulder dress was ‘appropriate’ for the event 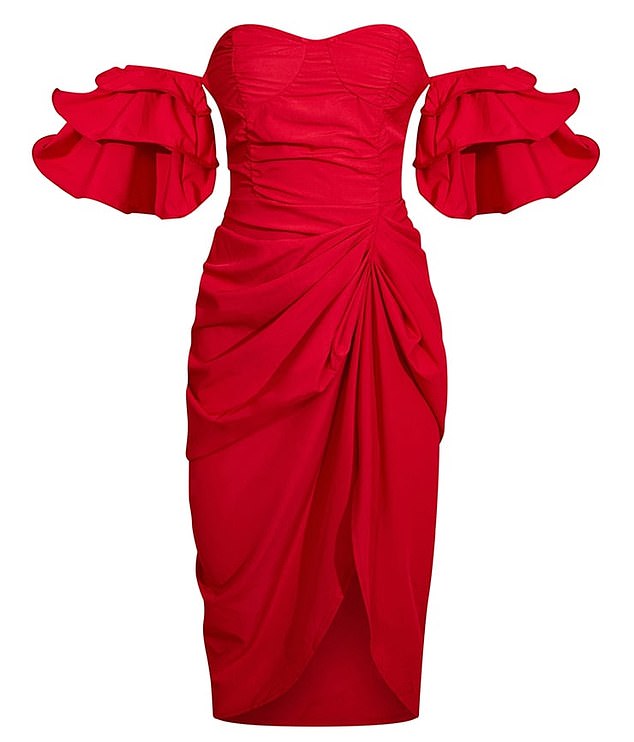 Many commenters agreed that the dress wasn’t appropriate for a wedding based on it’s styled rather then the colour as it was ‘too revealing’.

One person wrote: ‘I wouldn’t wear that to a wedding because of the style rather than the colour. It’s too revealing and eye catching so might take attention away from the bride.’

While another said: ‘The colour is fine, I’m not sure about the style. If the wedding is in a religious venue I wouldn’t reveal that much skin personally.’

Someone else wrote: ‘It’s not the colour it’s the style. I really don’t think that’s ok to wear to a wedding ( or anywhere really to be honest..) Sorry.’ 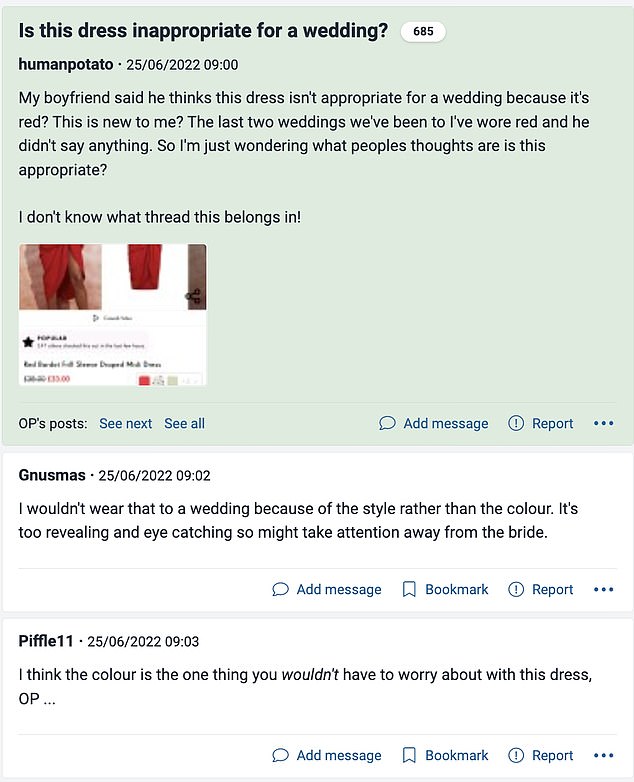 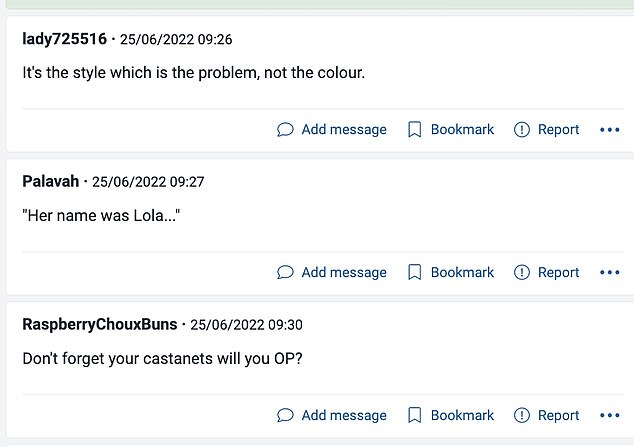 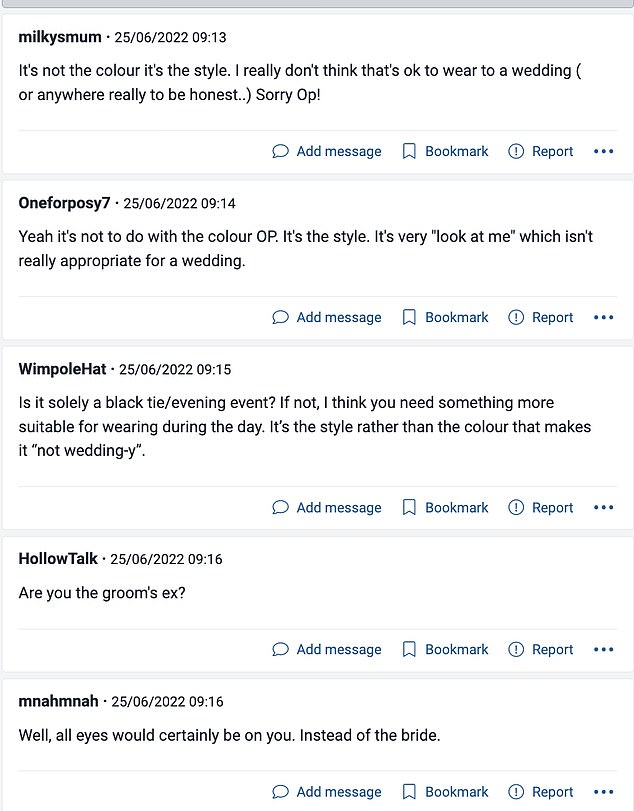 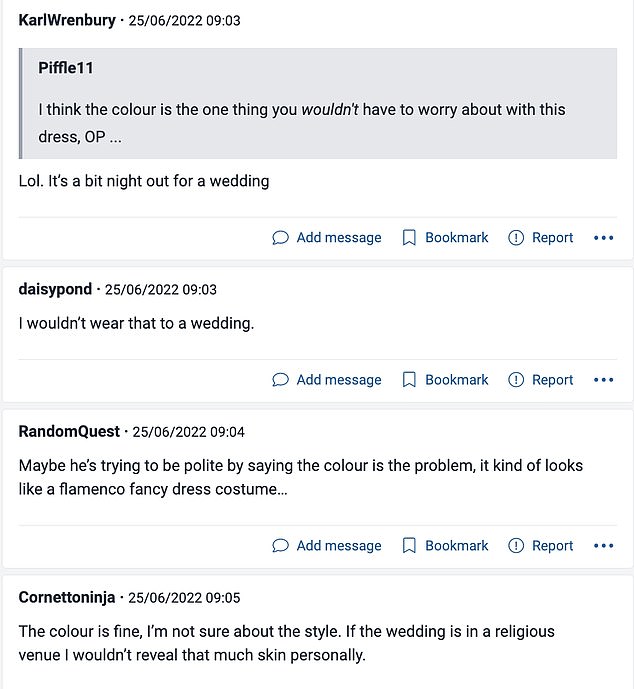 With some claiming her boyfriend was just trying to be polite a steer her away from the gown.

Another wrote: ‘Maybe he’s trying to be polite by saying the colour is the problem, it kind of looks like a flamenco fancy dress costume…

While someone else said: ‘It’s a bit ‘much’ for a wedding and I’m not talking about the colour. I think your DP is trying to gently steer you here and I’d take his advice. Try something a bit less eye-catching.’

Other commenters had joked that the women would look like the ‘entertainment’ in the dress.

With one person saying: ‘Are you being paid to do entertainment? another quipped: ‘Is it a flamenco wedding?’ 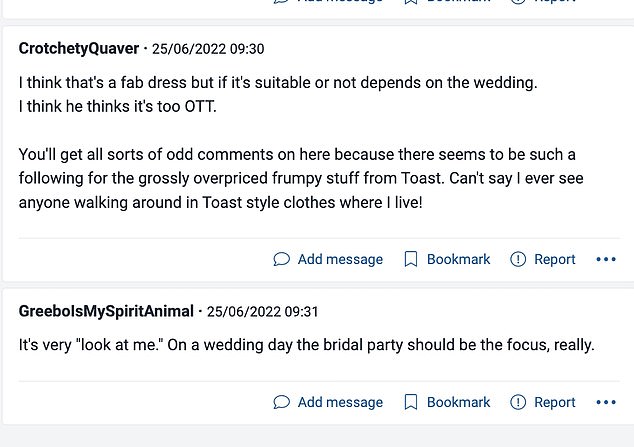 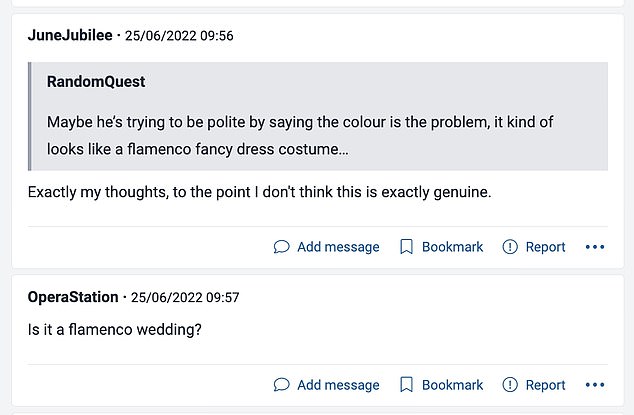 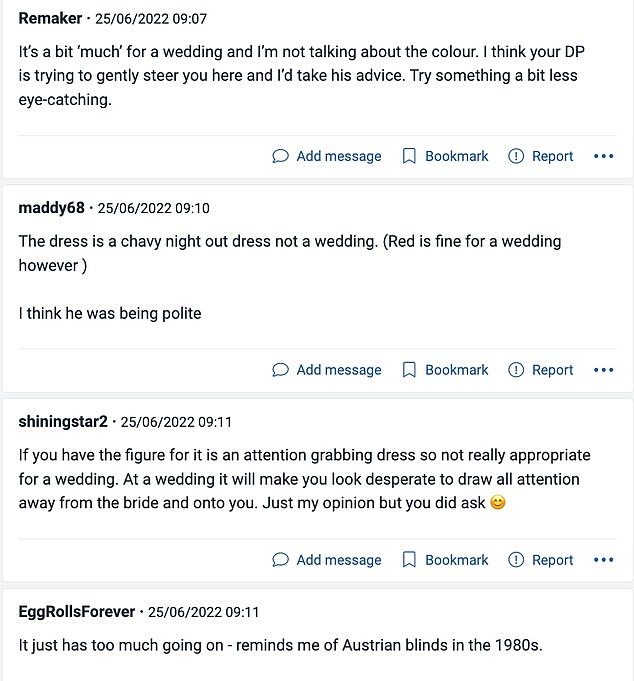 Others didn’t hold back on the flamboyant red gown from fashion brand Pretty Little Thing calling it ‘chav, tacky and ‘minging’

While another commented: ‘Well, it is nice but its giving off cruise ship lounge singer vibes.’

Others didn’t hold back on the flamboyant red gown from fashion brand Pretty Little Thing calling it ‘chav, tacky and ‘minging.’

Saying: ‘It’s a bit tacky to be honest l. Tell us your budget and what kind of wedding it is, whether you’re a day or evening guest and we’ll find something appropriate for you.’

Another mum wrote: ‘What he means is, that dress is minging.’ While someone else  said: ‘The dress is a chavy night out dress not a wedding. (Red is fine for a wedding however) I think he was being polite.’

Luckily, the poster took all the harsh comments on the chin but revealed she ordered the dress anyway.

She said: ‘Thanks for the responses. I have ordered it, however I may keep it for the night time and wear something else for during the day.’

One commented questioned if wedding guests should be changing their outfits half way through the day.

She said: ‘Is this a thing? Guests changing part way through the day? That used to be seen thing the bride did.’ 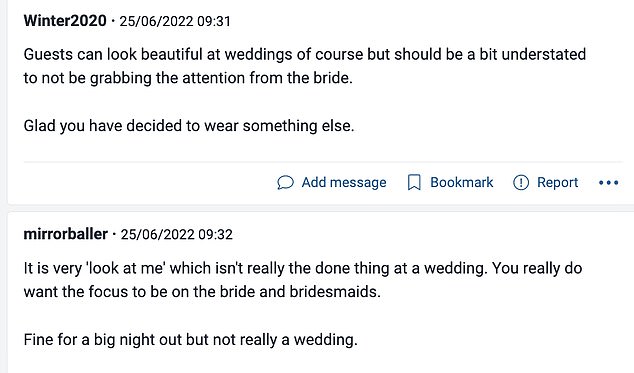 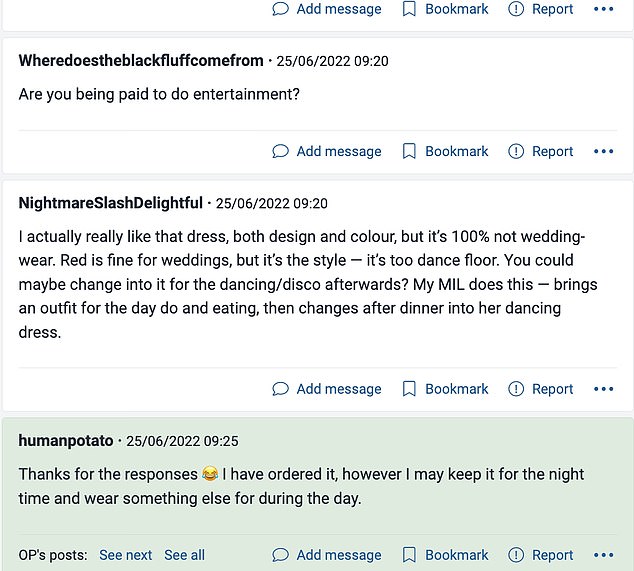 Luckily, the poster took all the harsh comments on the chin but revealed she ordered the dress anyway

The original poster said: ‘I said I’ve ordered it, but if I like it I may wear it for the evening because surely it doesn’t matter as much what someone wears to the party? I mean I won’t wear it to the reception.’

This angered some more commenters who claimed changing outfits screams ‘look at me.’

One person said: ‘Omg?! You’d actually change outfit at a wedding?? Why on earth would you do that. The day isn’t about you. It’s inappropriate for a wedding, day or night. It’s screaming “I want to be the centre of attention”‘

Another wrote: ‘You’re going to wear it for the evening? Why are you determined to have all eyes on you at some point in the wedding? Whose wedding is it?

While another said: ‘Not usual for guests to change into a different outfit for the evening at most weddings. It’s very much “look at meeeeeeeeee”. That’s not really the thing to be at someone else’s wedding.’ 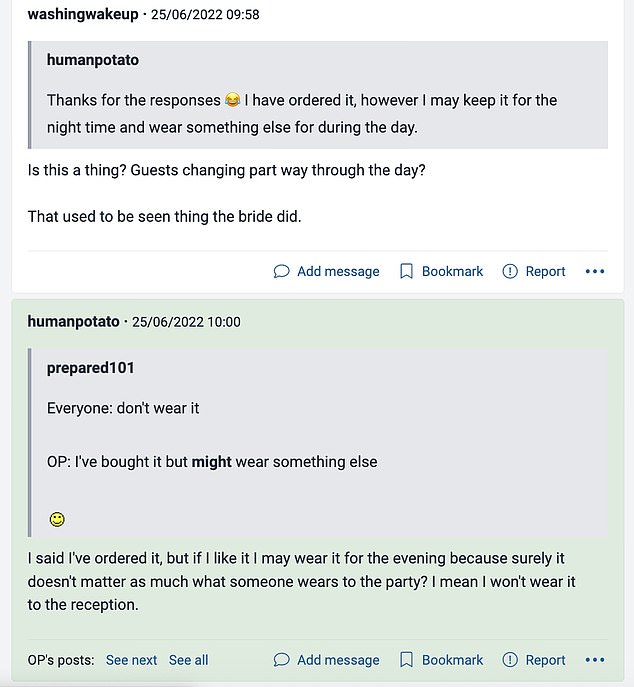