Adam spots Billy eating at Society and needles about him being alone. Billy lets him know that Lily will be joining him at Victoria’s wedding and mocks him for not being invited. Adam tells him he actually is going to the event. Billy can’t believe Adam thinks that Victoria marrying Ashland is a good thing. Adam feels she finally found the man she deserves. Billy hints that there might not be a wedding. Victoria’s already left for Tuscany, but that doesn’t guarantee she’ll walk down the aisle. Adam wonders if it’s more wishful thinking. Billy calls it a hunch. Adam feels that his sister is deeply in love, and for the first time in a long time knows exactly what she’s doing.

In a suite at the hotel, Sally unveils her wedding dress for Victoria to Chloe, who is blown away. Sally muses that now they just have to figure out how to get it in front of the blushing bride. She knows if she takes one look at it, she’ll fall in love. Chloe remarks on her executive assistant being a bust and warns Sally against pulling an over-the-top stunt. Chloe suggests luring Victoria to meet by pretending she’s spoken to Lauren. She salivates over the idea of her wearing the gown on her wedding day and bringing them one step closer to turning Newman Media’s fashion platform into a full-fledged fashion house. 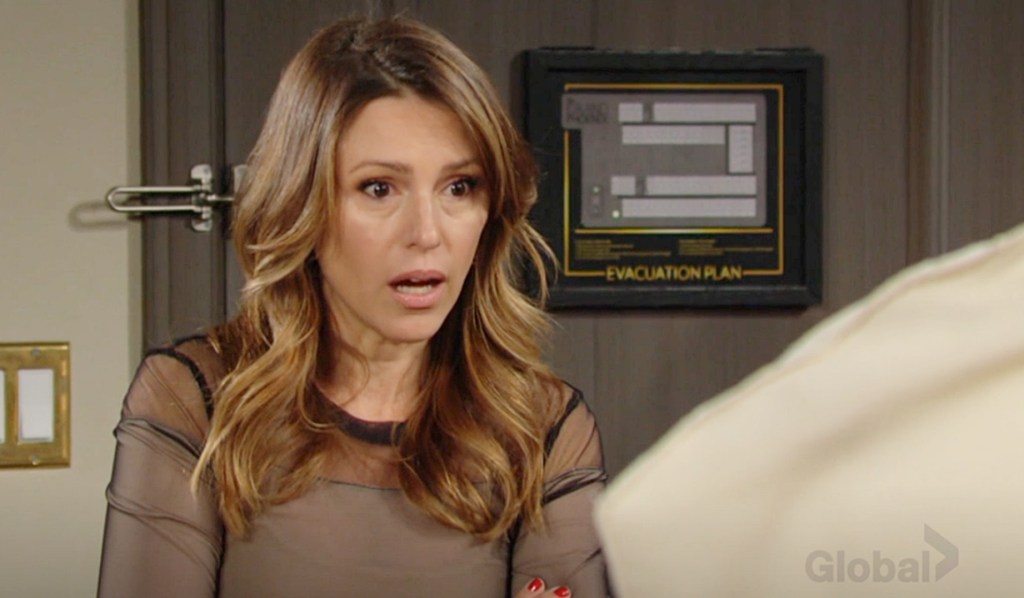 More: Y&R alum’s kids are all grown up

In Tuscany, Victoria and Ashland arrive at the villa and admire their surroundings. Ashland tells the housekeeper that it’s almost as breathtaking as the woman he wants to marry. The housekeeper leaves them alone and Ashland tells Victoria he’s glad she got some sleep on the flight. Victoria was going to tell him on their wedding night, but decides to do it now. “My father gifted us the palazzo.” Ashland thinks that sounds like there’s still going to be a wedding. 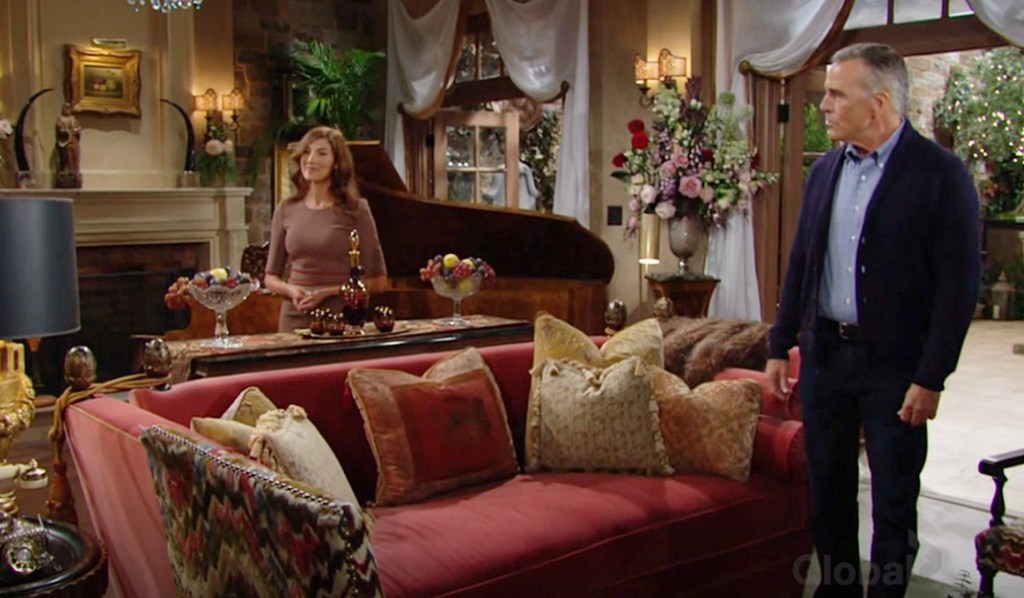 At Crimson Lights, Sharon and Rey flirt as Mariah comes in and says she’s feeling a lot better. Sharon asks what’s changed. Mariah replies, “Don’t worry mom, we’re not pregnant. But having a baby isn’t off the table yet.” Rey didn’t know they were considering having a baby. Mariah informs him that her mother and Tessa think her wanting this is a kneejerk reaction. They have tabled the discussion until after they get back from Tuscany. Sharon thinks that’s a good idea. Mariah reveals she’s going to see Abby and the baby to apologize and Sharon asks if she’s sure she’s ready. Mariah reassures her. “I will call you later.” 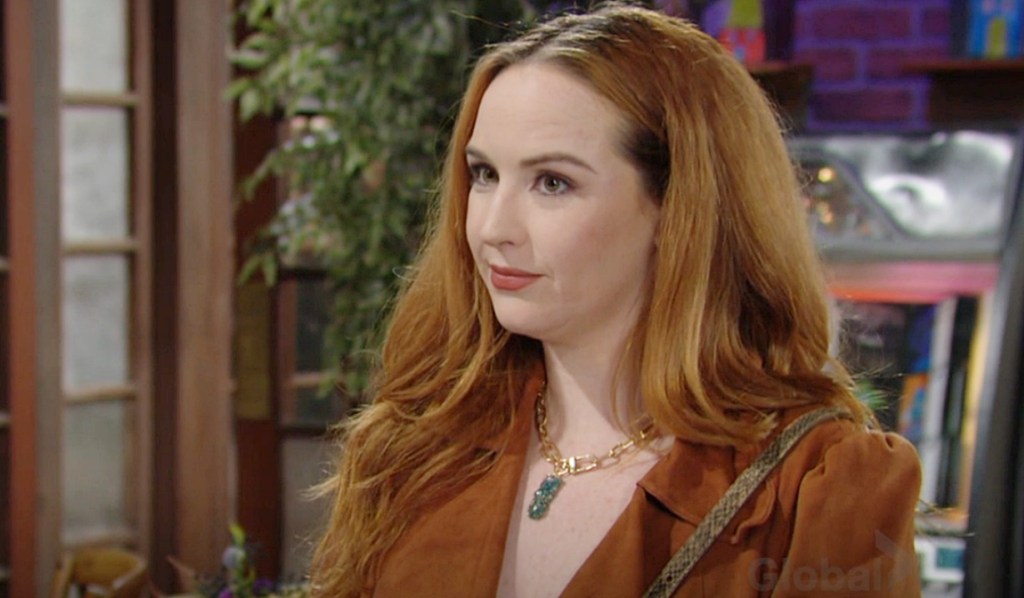 After Mariah leaves, Rey notes that she was in good spirits, but Sharon thinks her daughter’s just trying to make it appear everything’s okay. Tessa appears and is surprised to hear that her partner was headed to Abby’s. Sharon says she claimed to be in a better place and asks, “Is that true?” Tessa relays that she was pretty angry about them talking behind her back, but later she seemed to see they were coming from a place of love. Sharon’s glad they’re getting away and going to the wedding. It’s exactly what they both need right now. 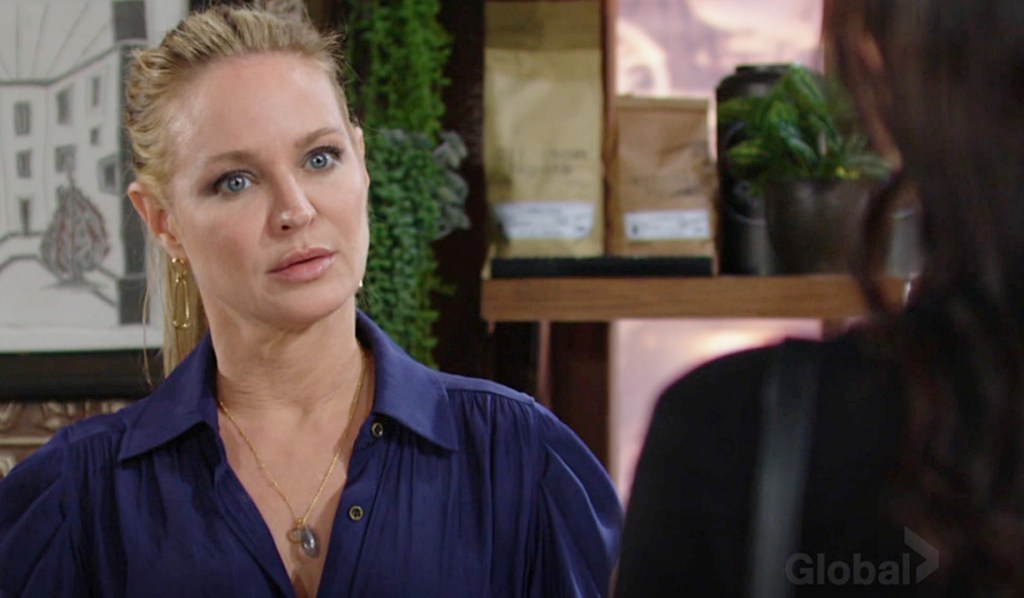 At the Chancellor mansion, Abby and Devon jolt awake in the living room when the baby cries. Abby checks him and he seems better. She exhales, “Thank God. It seems like Dominic is going to be okay.” Devon texts Amanda and Abby apologizes for keeping him there all night. He shrugs it off; they fell asleep. Abby goes for his bottle and Devon answers the door to Mariah. He explains why he was there and Mariah, concerned about the baby, immediately goes to the bassinet. Devon assures her that he only needed saline drops and Abby just called him because Dominic wouldn’t go to sleep. Mariah muses, “She called you?”

More: Mariah’s refusal to back down will cause trouble

Abby appears and Mariah tells her why she stopped by before noting it’s a little soon for Dominic to be getting sick. She wants to know exactly what Abby did to treat him. Abby assures her the baby’s fine and they have it covered. He cries and Abby feeds him. Mariah explains she and Tessa are leaving for Tuscany soon but she’s stockpiled milk and is bringing equipment to pump. Abby relays that she’s not going to take Dominic to Italy after all and breaks the news that she’s decided to switch him to formula. Mariah’s taken aback but says she understands. Abby invites her to share her emotions or thoughts. Devon reminds her they’re all friends. The baby cries and Mariah decides she should go. Devon and Abby exchange a concerned look. 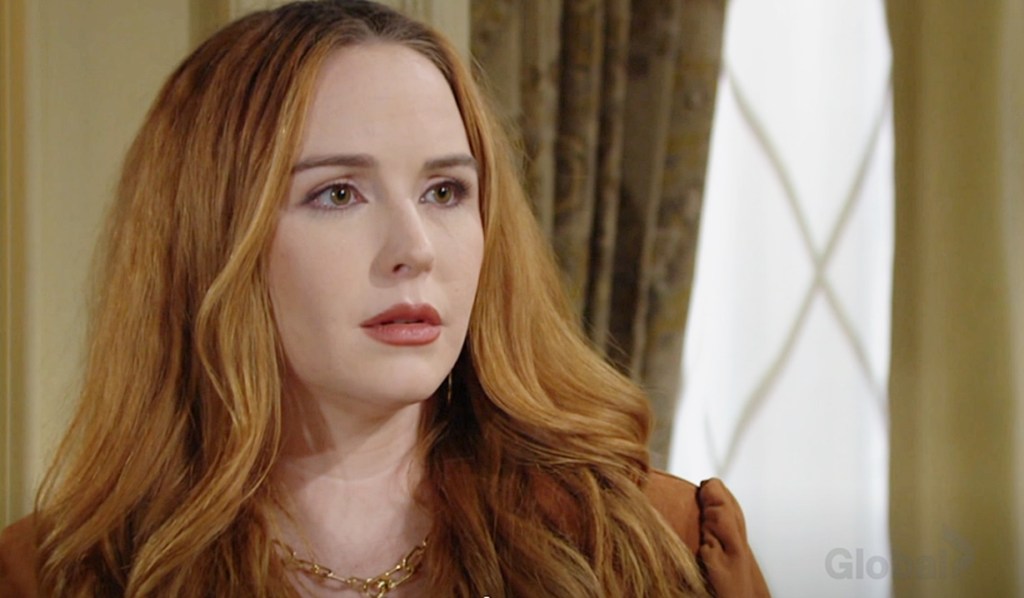 In the hotel suite, Chloe reports to Sally that they’re out of luck on getting a meeting with Victoria; she’s already gone to Tuscany. She feels terrible that Sally went to all that trouble for nothing! Sally refuses to give up; this is just a minor setback. Chloe says the private jet has sailed; she doesn’t see any options. Sally decides if she can’t bring Victoria to the dress, she’ll bring the dress to Victoria — she’s going to Tuscany!

At Society, Adam and Billy continue bickering about Victoria and Ashland. Adam says with the wedding a week away she’s past the point of no return. Billy counters, “We’ll see about that, won’t we?” He thinks maybe something or someone will change her mind. Once alone, Adam calls Victor to warn him that Billy may be planning to interfere in Victoria’s wedding. Victor grouches that he can’t stand to see her happy with another man. “We have to stop him.” He asks if Adam’s willing to help. Adam’s not sure he’s the right man for the job, but Victor insists — he has to stop Billy Boy. 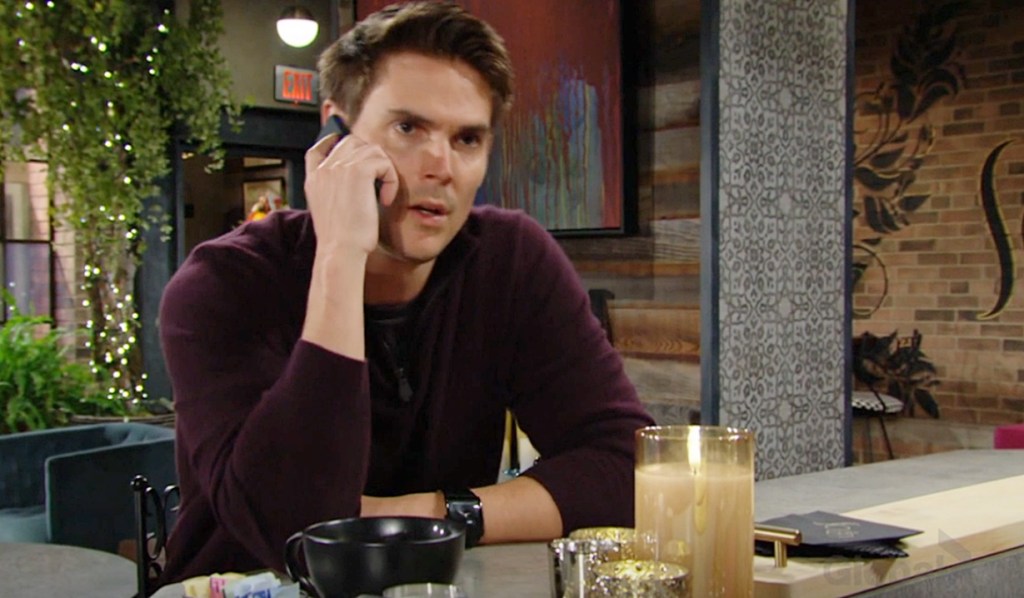 In Tuscany, Victoria assures Ashland she wouldn’t have flown overseas with him if she’d already decided not to marry him, but she wants to hear his confession — she presumes it’s much worse than everything she’s already heard. Ashland doesn’t want to push her to do something that feels wrong in her heart. Victoria knows he’s a man who gets what he wants and she fell in love with him because she’s the same way. Ash hopes their love can endure what they’re going through right now. Victoria still loves him. He realizes he should have been more forth-coming and laid it all out. Victoria sort of understands why he didn’t; but can’t deal with deception. Ashland is deeply regretful and explains there’s only two people who know this other thing he has to tell her. There’s been a wall around him and he’s tried to lower it for her, but it doesn’t come easy. “I want more than anything to make this work. I need this to work.” He’ll do whatever he can to prove to her there will be no more lies. “There’s one more thing that I need to tell you.” 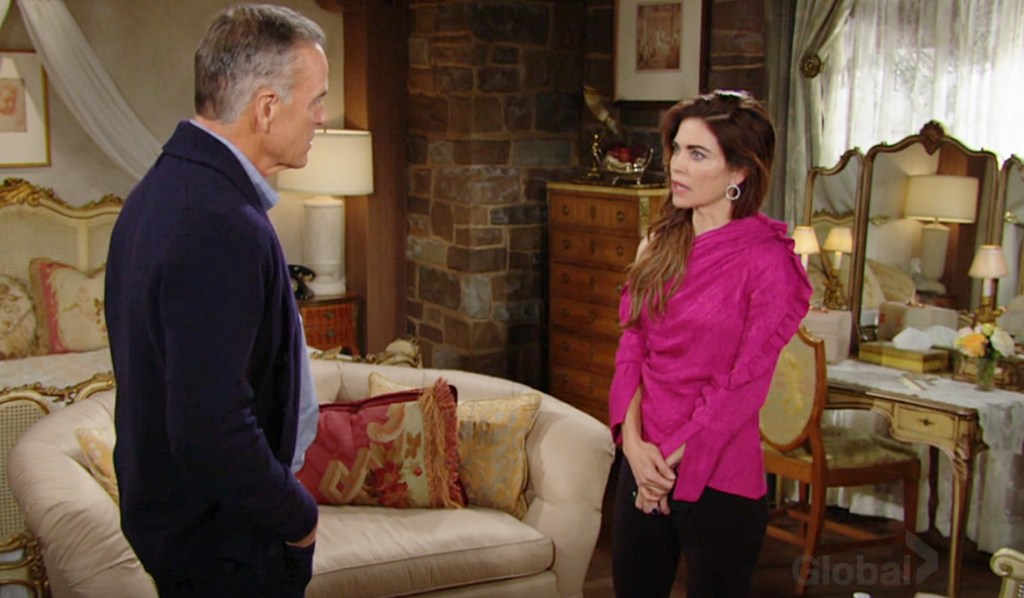 At Chance Comm, Billy gets an update by phone from the investigator looking into Camilla Rhodes’ will and marvels, “What?! You’ve got to be kidding me?” He curses to himself, “Ashland Locke, you son of a bitch!”

Chloe and Sally enter Society bickering about the redhead’s plan to jet to Italy with Victoria’s dress. Sally knows the odds are against her but this is their ‘make it or break it’ moment. Chloe admits it would be amazing to realize their dream. She admires Sally’s determination and wishes her luck. Chloe steps out to take a call and Sally spots Adam. “When do you plan to leave for the wedding?” Adam warily asks, “Why?” Sally needs to bum a ride to Italy. She explains that the spectacular dress is ready but the bride took off too early to see it. Adam is skeptical, but warns if he goes along with it, he wants to keep things professional between them. Sally agrees. Adam sighs — there’s really no reason to fight her on this. “Sure. Why not?” Sally owes him one. 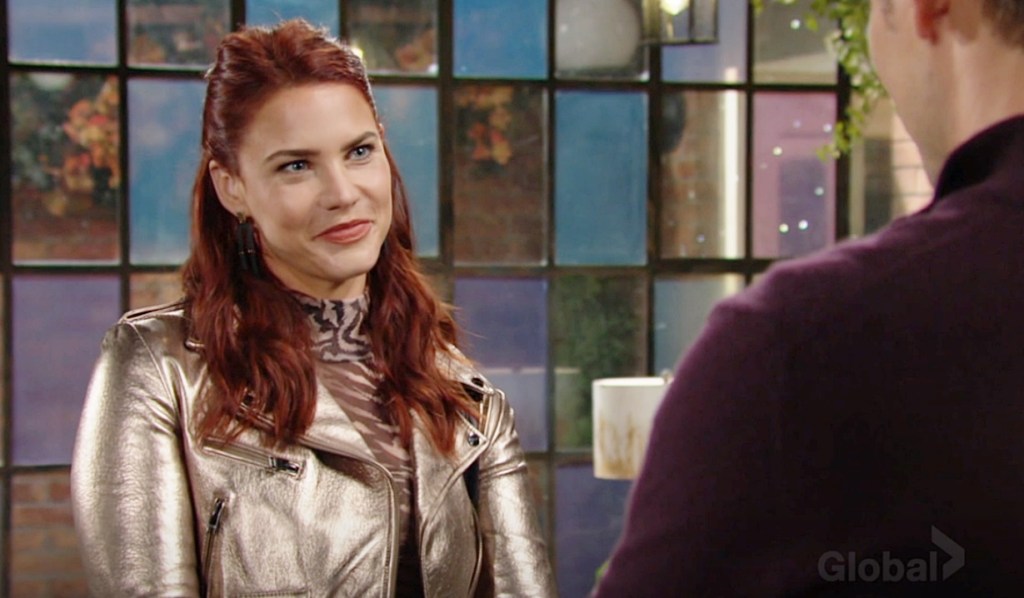 At the Chancellor Estate, Dominic is ailing, so Abby and Devon decide to call the doctor again. She gets off the phone and says the physician isn’t too concerned and asked her to check in later. 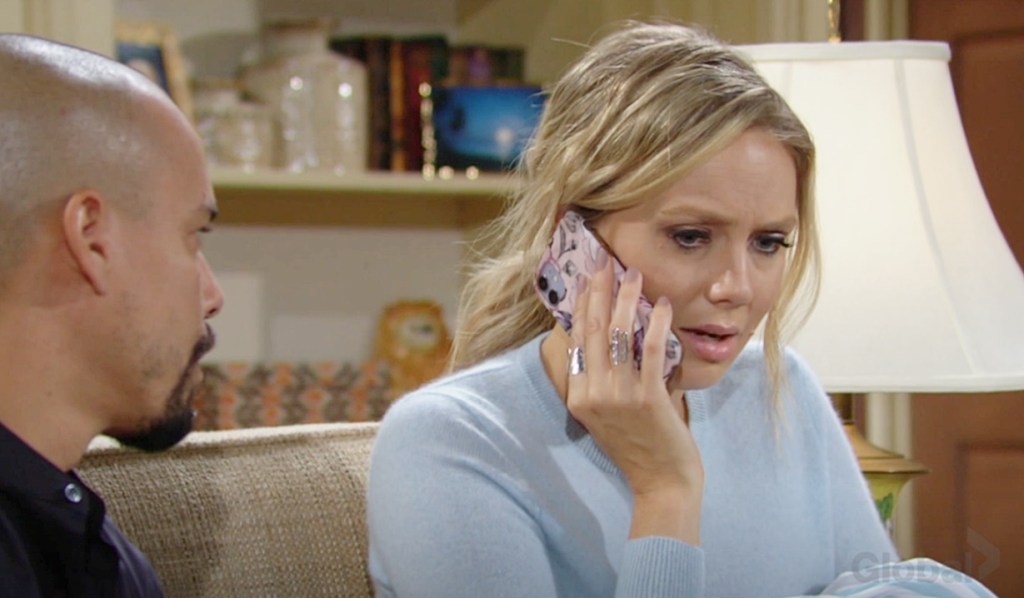 In her hotel suite, Mariah replays her debate with Tessa about having a baby in her mind. Tessa comes in and Mariah stands up, pastes on a smile and says, “Hey!” Tessa questions her about going to Abby’s and asks how it went. Mariah had it planned out how it was going to go, but when she got there everything changed. She relays that Bowie was sick and even though Abby and Devon said it may only be a cold, she couldn’t help but worry. Tessa’s sure that Abby’s taking good care of him. Mariah can’t possibly leave the country without knowing for sure that he’s okay. Tessa advises she take a step back — the baby is in amazing hands; she doesn’t have to worry about him. Mariah barks, “Tessa, I can’t just stop worrying about the baby because we don’t live there anymore!” She continues that she loves Bowie and that is why having a baby of their own was supposed to work — she’d have someone to pour her love into. Mariah announces she’s changed her mind about the trip. “I’m not going to Italy. I have to stay here in case Bowie needs anything.” Tessa’s stunned. 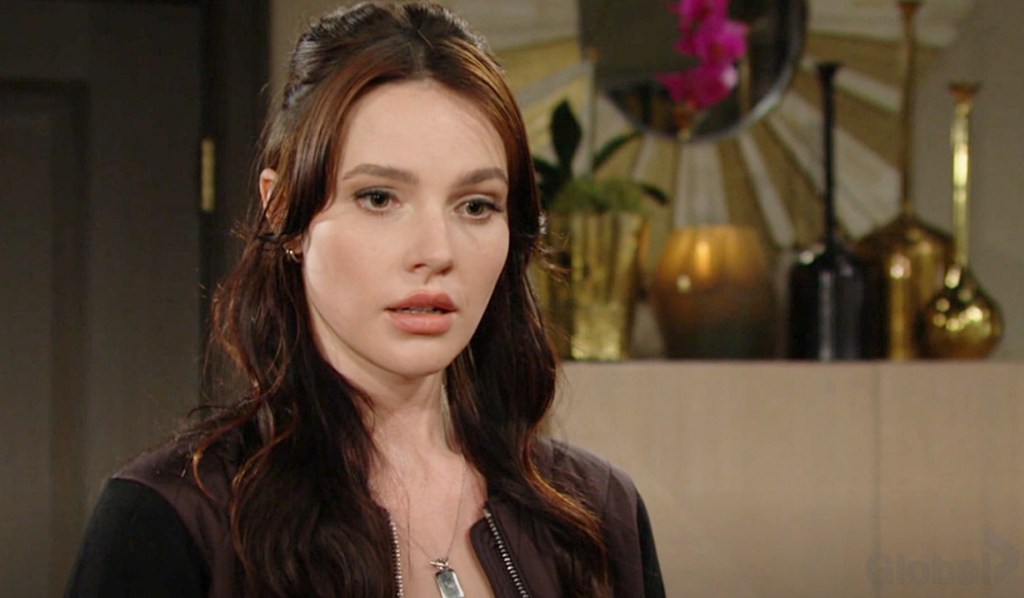 In Tuscany, Ashland is going to tell Victoria everything, but he imagines she must be hungry and suggests they shelve his past for now while they eat and have a glass of wine or two.

In Society, Adam tells his associate to find out whatever he can about the search Chance Comm is conducting on Jessie Gaines. He and his father are counting on him to do whatever it takes to stay one step ahead of Billy Abbott.

At Chance Comm, Billy’s investigator informs him they couldn’t turn up Camilla Rhodes’ will or banking records. Billy asks if it’s possible Ashland made them disappear — permanently. The woman can’t be sure… but they may have hit pay dirt on another angle of the investigation. Billy asks, “Jessie Gaines?!” She nods. “Yeah, we finally got a lead on him.” Billy bets he’s got all the answers he’s looking for on Ashland Locke. 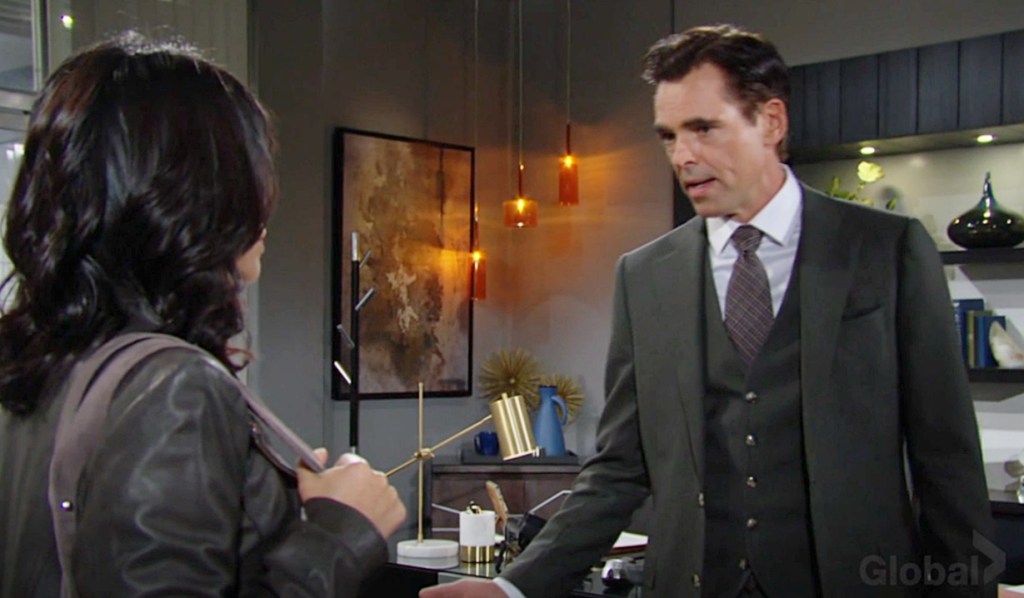 Next on The Young and the Restless: Nate and Elena cover for a friend.

Adam wants to keep it professional with Sally, but we can still take a look back at Adam’s relationships through the years in the photo gallery below.