Chasity McGrady-Lindo and Francois Lindo were friends for years before they fell in love. 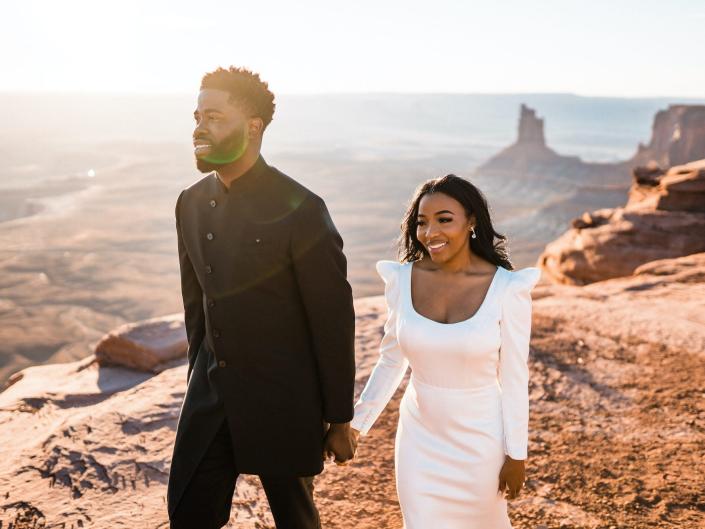 McGrady-Lindo, 34, and Lindo, 31, met at college in 2010 at the University of Florida, as McGrady-Lindo told Insider.

They always got along, and McGrady-Lindo knew Lindo wanted more.

“He was in my DMs, and I would always ignore him,” she said.

But in 2018, she decided to give him a chance. They’ve been together ever since.

They’re now based in Texas, where McGrady-Lindo is a stay-at-home mom and Lindo is a computer engineer.

Lindo popped the question in February 2021. 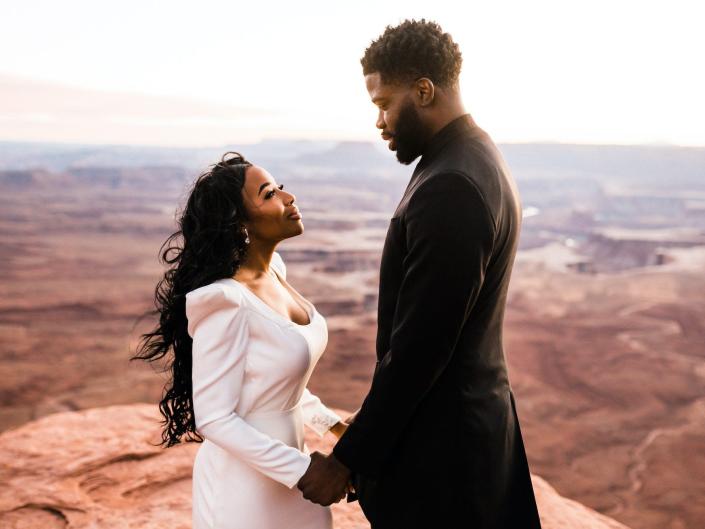 The couple have been together since 2018.The Foxes Photography

After Lindo proposed, the couple initially thought they would elope in the Moab desert in Utah, with just their daughter present.

As their engagement went on, they realized they wanted more of their loved ones at their wedding, but they didn’t want to let go of the intimate, desert elopement they had been dreaming of.

They decided to have a small wedding at The Red Earth Venue in Moab on November 6, 2021, planned by Kosi Events and Wild Heart Events. They planned the nuptials in just two months. 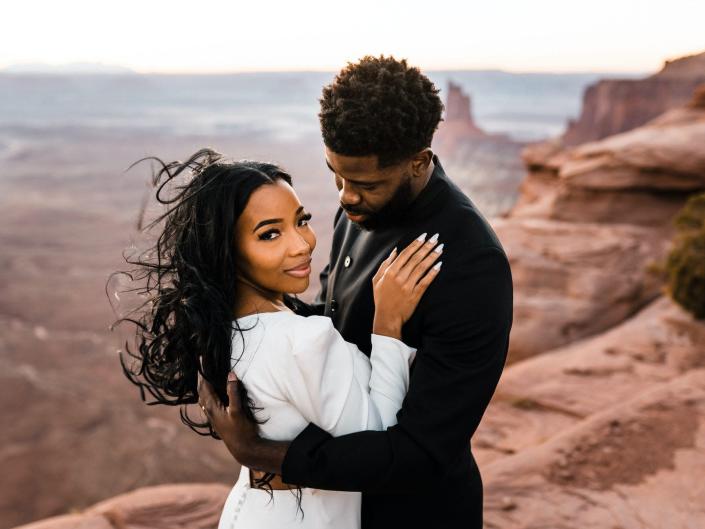 She knew what gown she wanted.The Foxes Photography

McGrady-Lindo knew she wanted her wedding dress to help set the town for her boho nuptials.

As she started researching gowns, she found herself drawn to a long-sleeve gown from Berta’s Colony collection.

She was eager to try on the gown, but the closest Berta flagship store to McGrady-Lindo was in Chicago. Luckily, a Berta trunk show came to town at just the right time.

“Randomly, we went dress shopping, me and two of my girlfriends,” she said. “Berta was on her last day of a trunk show, and the dress was there.”

As soon as she put the dress on, McGrady-Lindo knew the dress was the one. 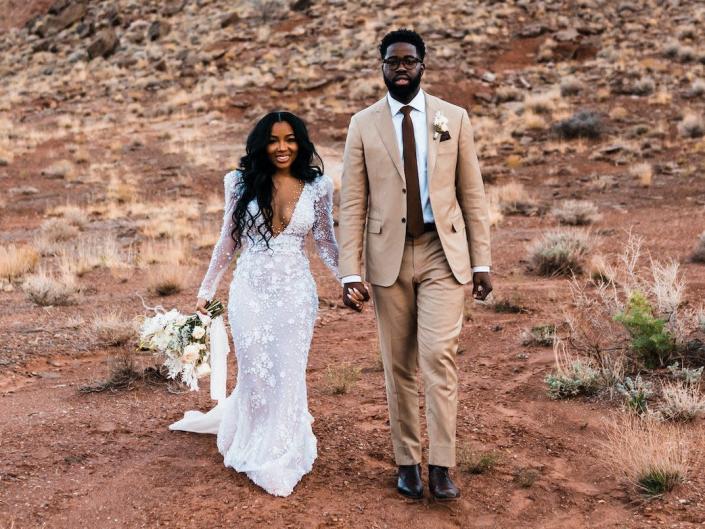 “It was literally heaven-sent,” McGrady-Lindo told Insider of how she felt when she put the gown on for the first time.

The long-sleeve, form-fitting dress cinched at the waist and had a plunging neckline.

The entire gown was covered in textured, floral applique that was emphasized by sheer cutouts. A small train completed the gown.

McGrady-Lindo said she was particularly drawn to the gown’s one-of-a-kind bodice. 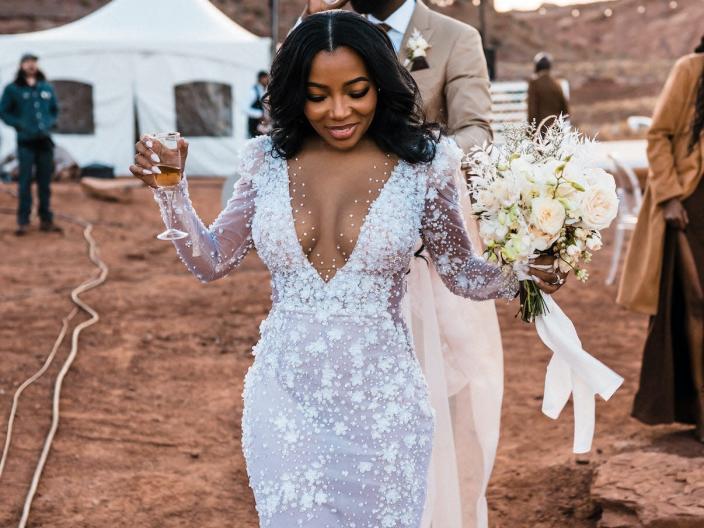 The bodice had an illusion neckline.The Foxes Photography

The neckline that dipped into a low V was already beautiful, but Berta took it to the next level by adding a layer of sheer fabric on the chest that was covered in delicate, sparkly beading.

The illusion neckline was both glamorous and modern, capturing the vibe McGrady-Lindo hoped her wedding would have.

The back of the dress was just as stunning as the front, too. 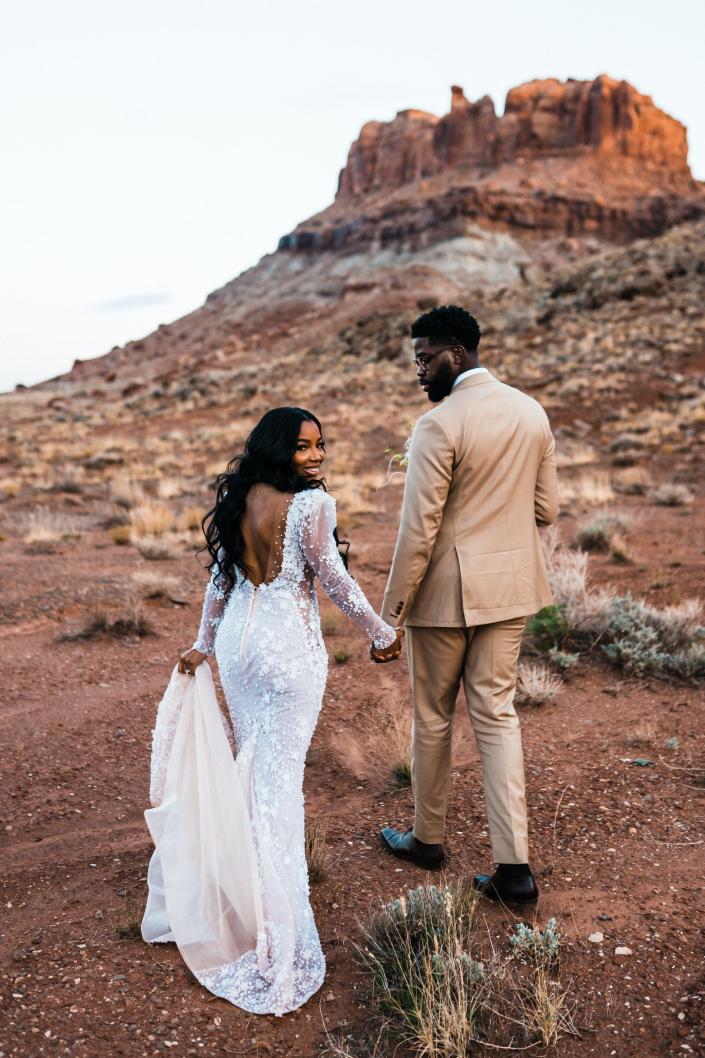 The back dipped low.The Foxes Photography

The back of the gown mirrored the front, dipping into a low scoop and then flowing into a statement train.

It also had the same illusion beading, creating a cohesive look.

The bride told Insider the dress made her feel “like a princess.” 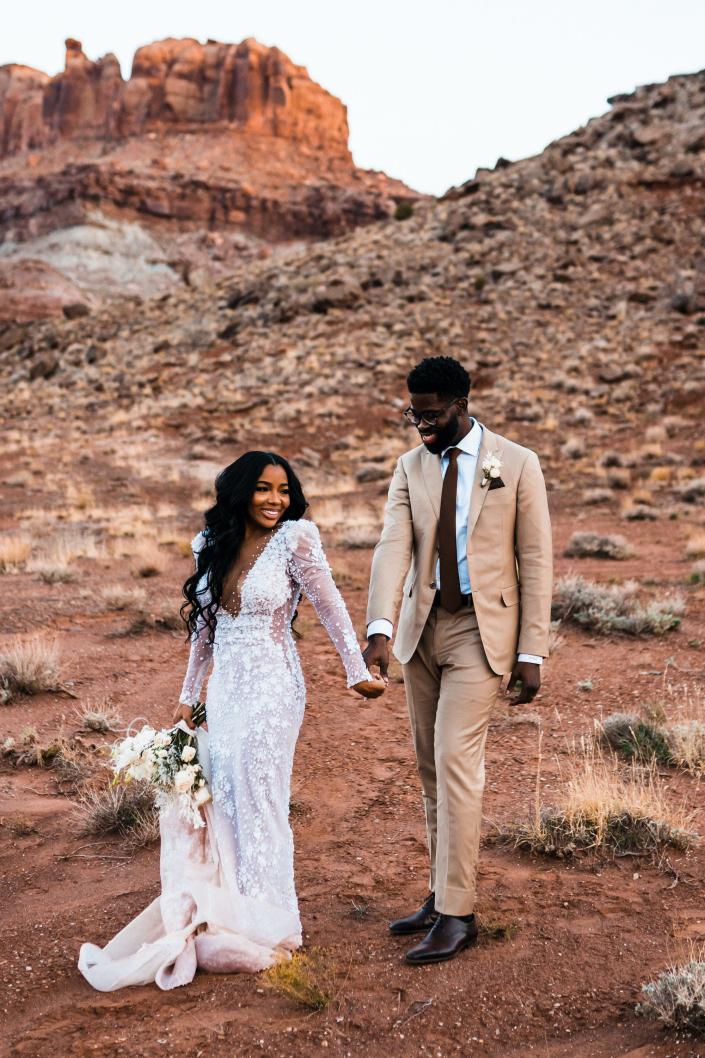 The dress was everything she wanted.The Foxes Photography

McGrady-Lindo said she loved that the dress balanced the beautiful and sexy look she was going for.

The dress had the elegant shape McGrady-Lindo wanted, but details like sheer cutouts along the side of the gown and the low neckline gave it a more mature edge.

“I felt like a sexy princess,” she said. “It brought more of that bohemian, whimsical feel that I wanted for that day.”

McGrady-Lindo kept the rest of her bridal look fairly simple. 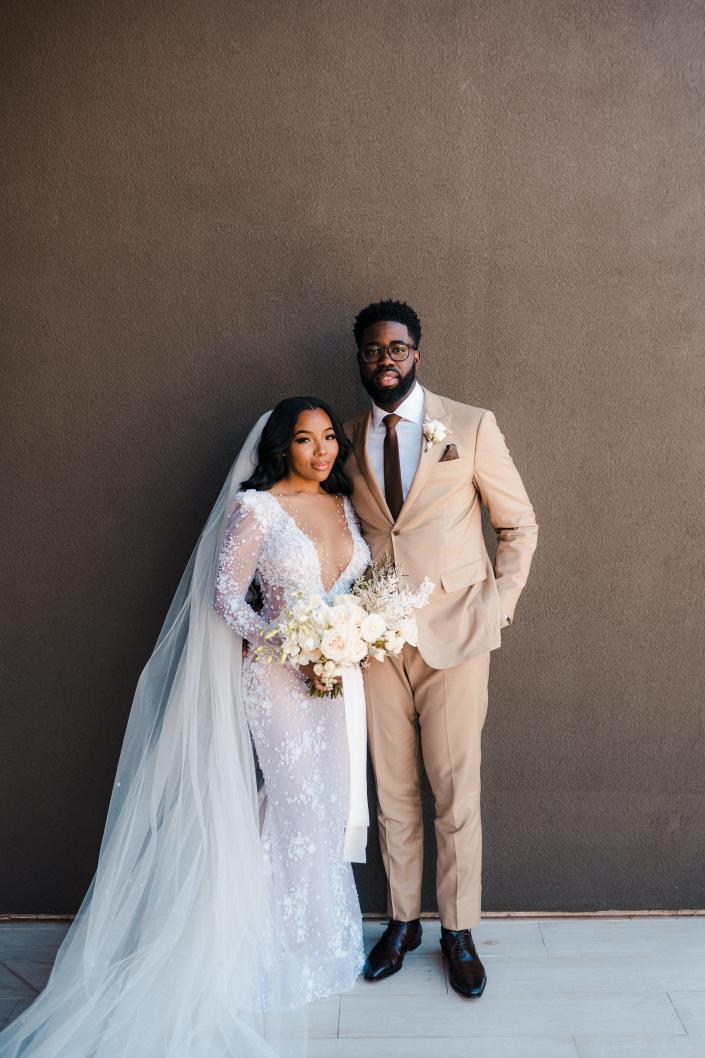 The bride and groom.The Foxes Photography

McGrady-Lindo completed the bridal ensemble with a veil from Berta, simple earrings, and a bracelet her sister-in-law wore on her own wedding day.

She was supposed to wear Jimmy Choo heels with the ensemble, but McGrady-Lindo discovered she had forgotten them just a few minutes before she was supposed to say “I do.” She ended up wearing heels she brought for her getting-ready look instead.

McGrady-Lindo told Insider she almost got upset about the shoes, but she decided to focus on the joy of the day instead.

“There’s gonna be hiccups and things might not go as smooth as you envisioned, but I also feel like it’s a mindset,” she said. “If you put in your mind that this is gonna be a magical day no matter what small things happen and you choose your happiness, everything will be fine.”

Jo Michelle Artistry did her makeup, and Tymica Martin was her hairstylist.

Lindo saw his bride in her dress during a first look ahead of their ceremony. 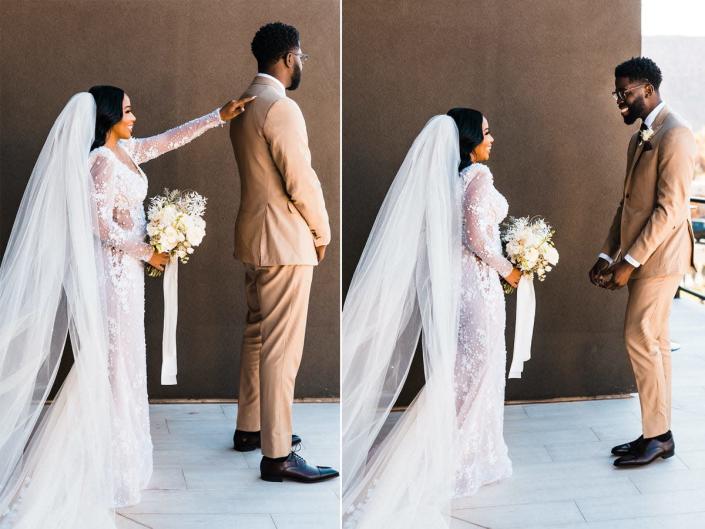 Lindo didn’t know what McGrady-Lindo’s dress looked like, so it was a complete surprise.

McGrady-Lindo said the first look was one of her favorite moments of the wedding day because it was just the two of them.

“We went there with the intent of an elopement,” she said. “So I wanted to just have that special, intimate moment with him before things got busy and crazy.”

The couple said their vows in the middle of the desert. 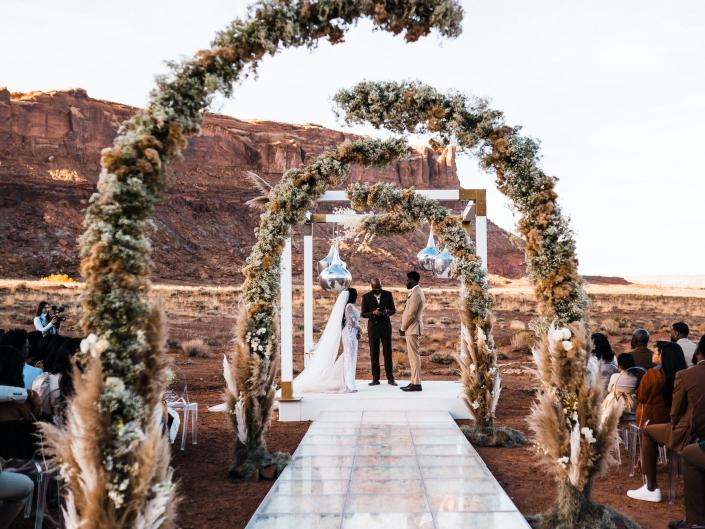 They said their vows in the desert.The Foxes Photography

The couple’s aisle stood out thanks to the deconstructed floral arches that lined it, which were created by Jess Oldham of Farm Yard Moab.

McGrady-Lindo said she was particularly grateful for Oldham because she typically does flowers for elopements, not large-scale weddings.

“She’s never done that big of an event, but she killed it,” she said.

The couple’s daughter played a big role in their wedding ceremony. 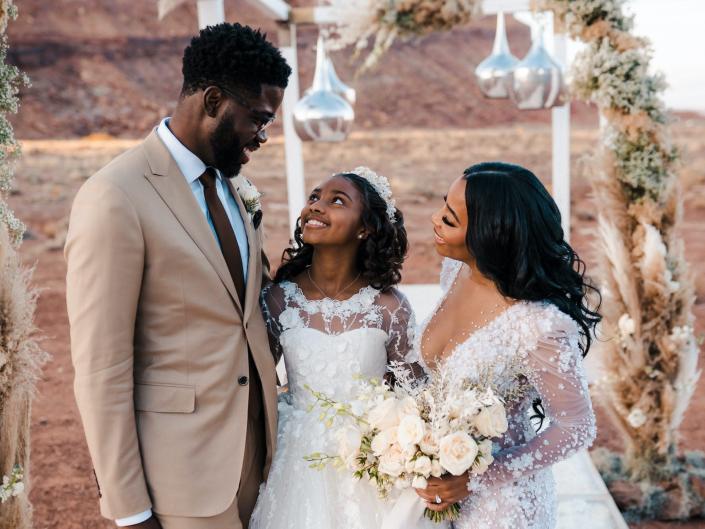 Their daughter was in the ceremony.The Foxes Photography

“I had my daughter before this marriage, and we wanted to really show the bond between us all and how we’ve grown as a family,” McGrady-Lindo said.

Lindo walked their daughter down the aisle, and the three of them performed a unity ritual during the ceremony.

Although they didn’t elope, the Lindos still had an intimate wedding. 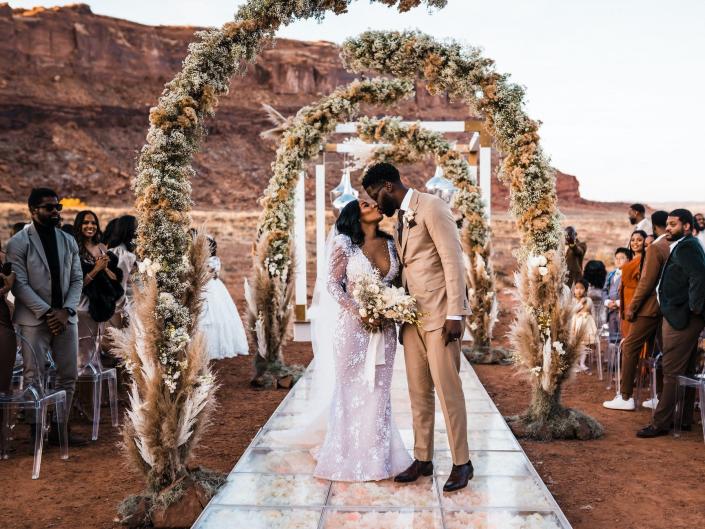 The wedding was small.The Foxes Photography

Fifty of the couple’s closest friends and family members attended the event, which Gabi and Brandon Fox of The Foxes Photography and Zoë Steindl photographed. Jay and Mack Films also documented the event.

They also didn’t have a bridal party, preferring to keep the day simple.

The evening reception was a big party. 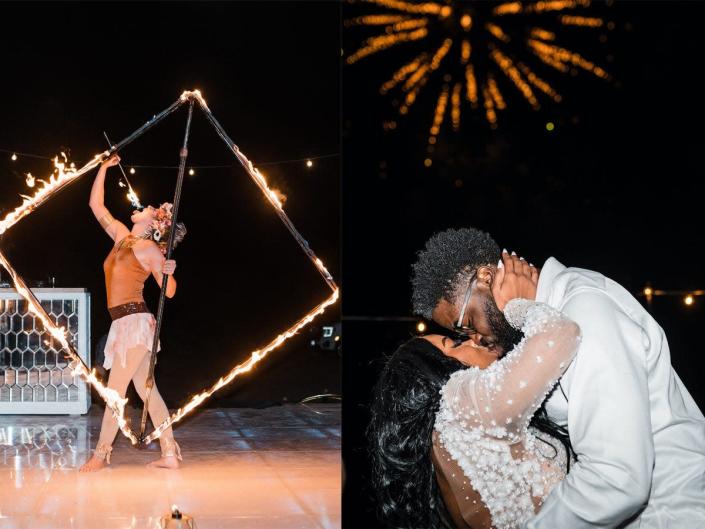 The reception was in the desert as well.The Foxes Photography

A fire dancer performed at the outdoor reception, while DJ JayR and Sax Therapyst played music.

The night ended with fireworks from Lantis Productions.

The couple loved getting to be in such a special place on their wedding day. 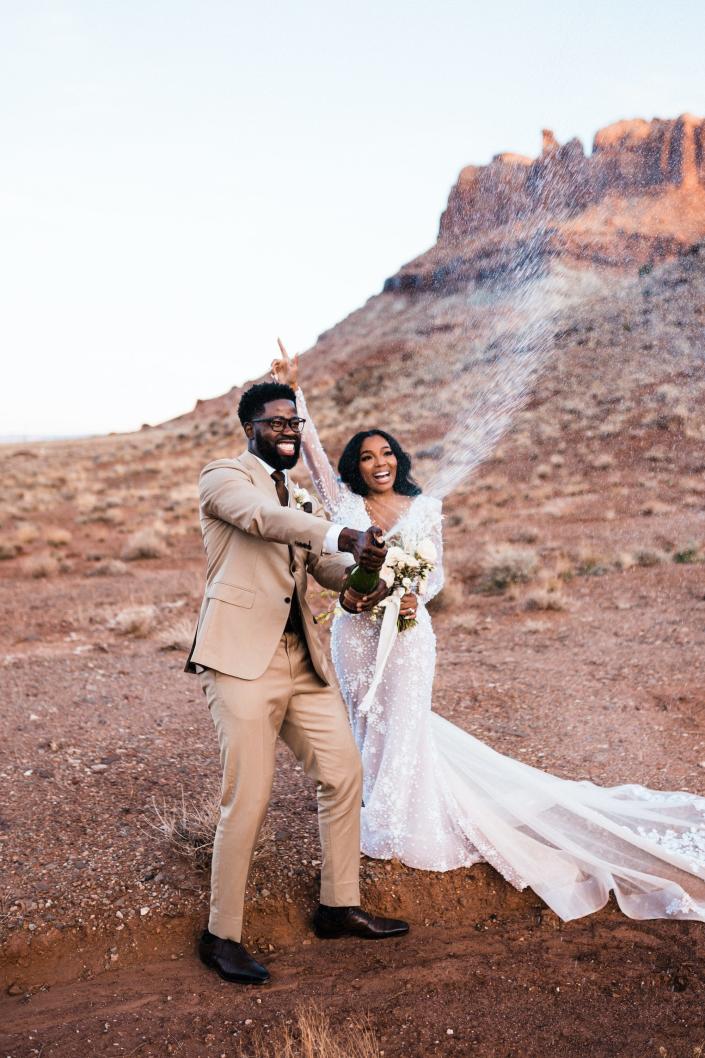 The venue made the event more special.The Foxes Photography

“The wedding day was magical,” McGrady-Lindo said. “On the wedding day when I walked in, just seeing the beauty of the red rocks, it was breathtaking.”

“All of our guests there were just thanking us for the experience,” she said, adding that the scenery made the event even more special for everyone there.

McGrady-Lindo recommends brides do their research before they go wedding-dress shopping. 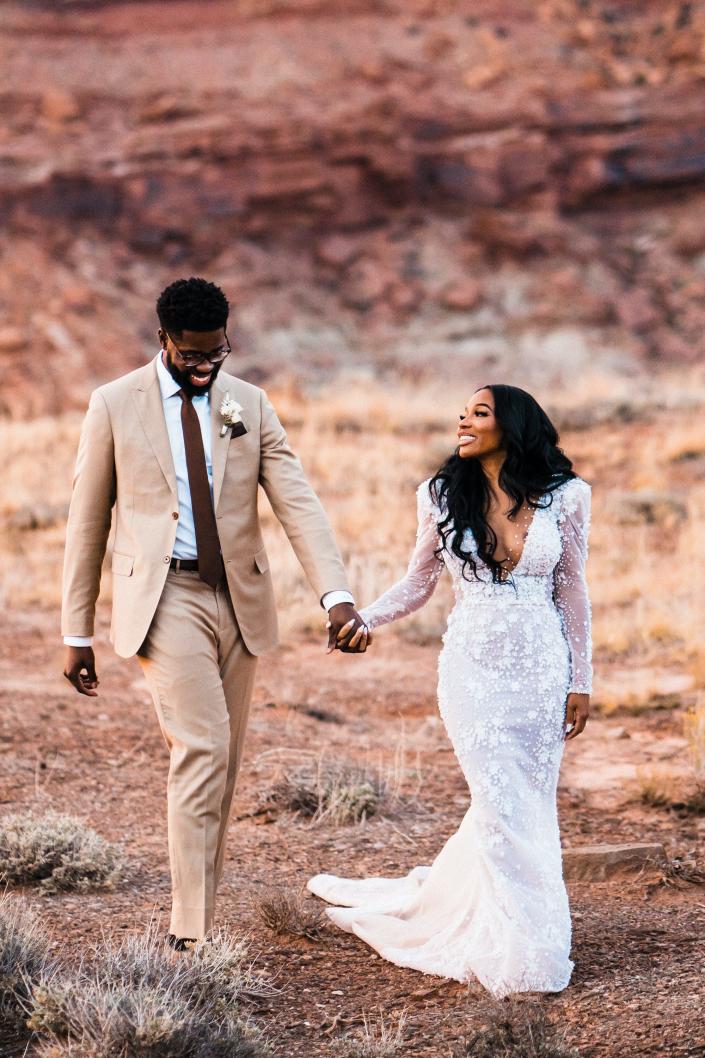 “Take your time with it, and know your vision before you walk into a shop,” she told Insider.

“Honestly, when I walked in, I was overwhelmed,” she went on to say. “I’ve seen some really, really, really nice dresses. However, before I went shopping, I spent a lot of time researching what I really, really wanted.”

“I had a clue of the direction I wanted to go, and had I not, I would’ve been lost,” McGrady-Lindo added.

“I like our love,” McGrady-Lindo said of her relationship with Lindo. 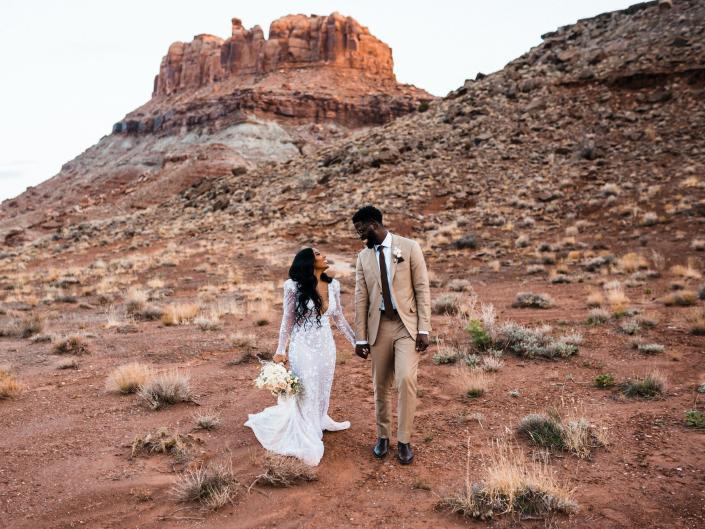 The bride and groom.The Foxes Photography

“Even when we disagree, it’s not over the top,” she said. “We always seem to come to a solution.”

“My family, my friends, they love him. They always like, ‘You’re so blessed. You’re so lucky,'” she went on to say. “And I do feel that way because he’s just so great.”

“I love the way my husband treats me,” she said of Lindo. 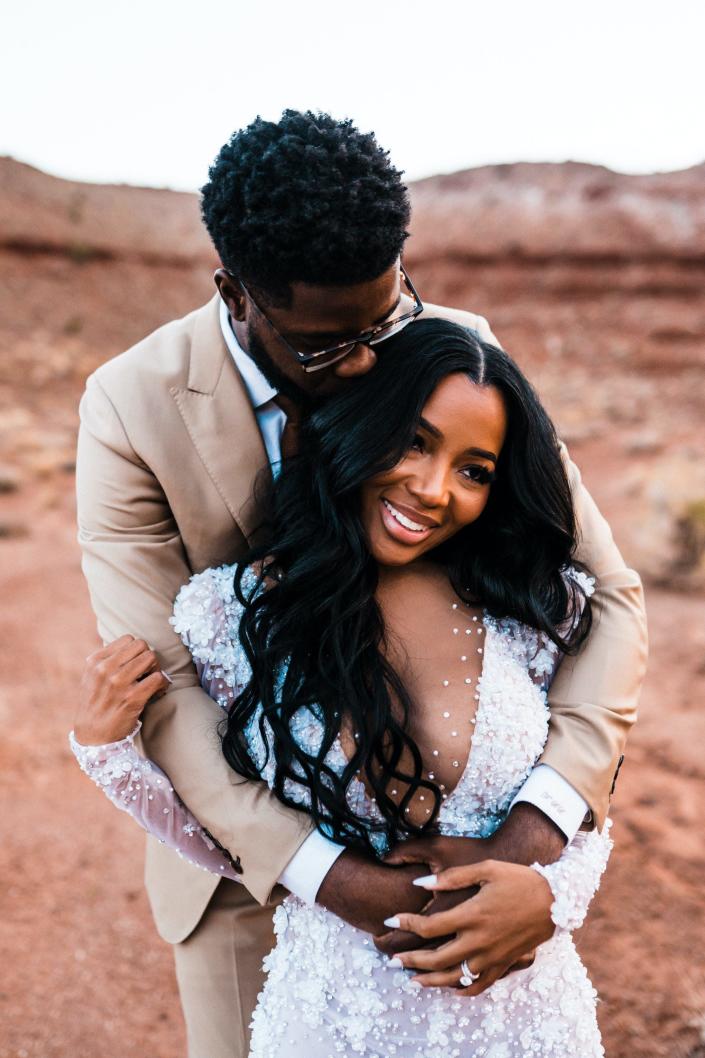 They’ve been together for five years.The Foxes Photography

“I wake up and I feel loved every single day,” she said. “I’ve never really had that before. He is definitely the answer to my prayers.”

You can see more of The Foxes Photography here.

If you wore an eye-catching wedding dress and want to talk to Insider for a story, get in touch at sgrindell@insider.com.

Read the original article on Insider