MONTGOMERY, Ala. (WSFA/Gray News) – A surprise party on Monday by their loved ones was music to the ears of a Montgomery, Alabama couple who have spent the last 75 years keeping each other in tune as husband and wife.

Cecil Prescott, 96, and his wife, Nell, 95, have reached their diamond anniversary, an impressive feat that few couples can fathom and even fewer accomplish.

For this musically influenced family, it’s a story of love and hard work, and one woven over the decades with moments that have helped write the song of their lives.

The two met among the sounds of open church hymnals at Birmingham’s Hunter Street Baptist Church when they were just high school teens. Love birds tweeted, but the drumbeat of a world war would temporarily pull them apart.

Following the attack on Pearl Harbor in late 1941, Cecil, like many others, heard Uncle Sam’s bugle, felt the call of duty, and joined the Navy.

He served aboard the USS Consolation, a hospital ship that picked up the Bataan Death March victims, tens of thousands of sick, starving, or injured American and Filipino prisoners of war who were forced by the Japanese Army to march, many until they died.

“They had many, many, many of those poor men on the ship that just ate that ship out of house at home to the point they finally had to start locking up the food because it made the men sick,” their eldest daughter, Cecilia Fortson, explained. “But my dad was a pharmacist’s mate on that ship, and that’s where he got the desire to like medicine and want to become a doctor.” 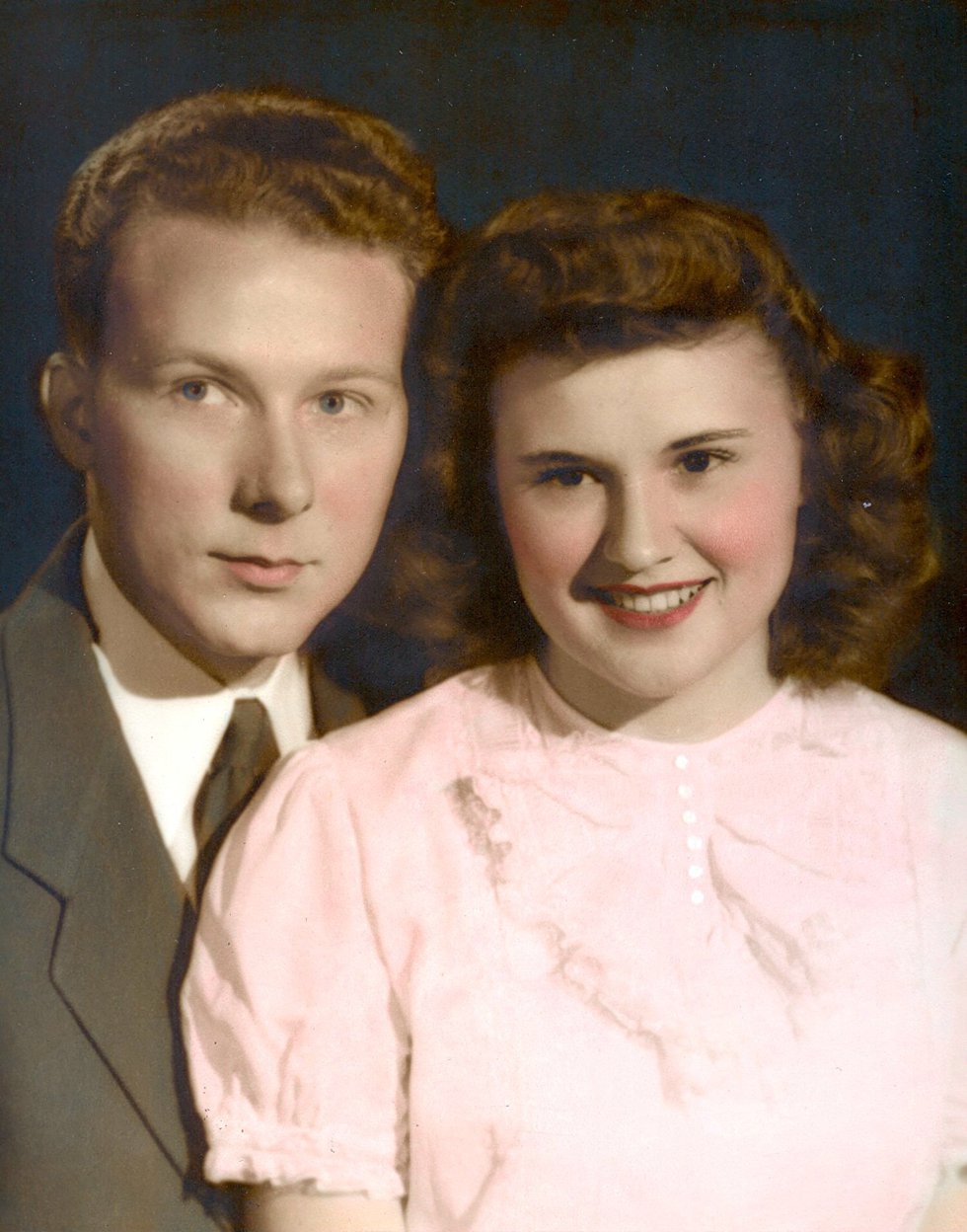 The Prescotts would most likely have been among the thousands of stories of lost love from the war had it not been for a passing comment about a musical instrument. Cecil’s father gave him a piano when he was just seven, then later gave him a saxophone. He fell in love with both and has since passed the inspiration to his children, avid instrument players themselves.

“He was in New York and training, and all of his group was to be shipped out on a transporter to go to Germany, or over in Europe,” Fortson said. “And so, he had told somebody that he played saxophone, and the night before he was to ship out, they called him and they said, “Hey, we understand you play saxophone?””

Prescott, who had been training to be a field medic, was pulled from his unit because of his ability to play and was told to report the following day to join the naval band. He followed orders, which almost certainly saved his life.

“So, he did, my dad reported to the St. Albans New York Hospital where they were starting the band,” Fortson revealed. “And his unit shipped out, and his unit was blown up, and no survivors,” the devastatingly lethal result of a German U-boat torpedo.

In 1945 with the end of the war, Uncle Sam’s bugle rested. Cecil and Nell fell back into the rhythm of dating life and, more than a year later, they listened to the Christmas music fade with the rising tone of wedding bells. 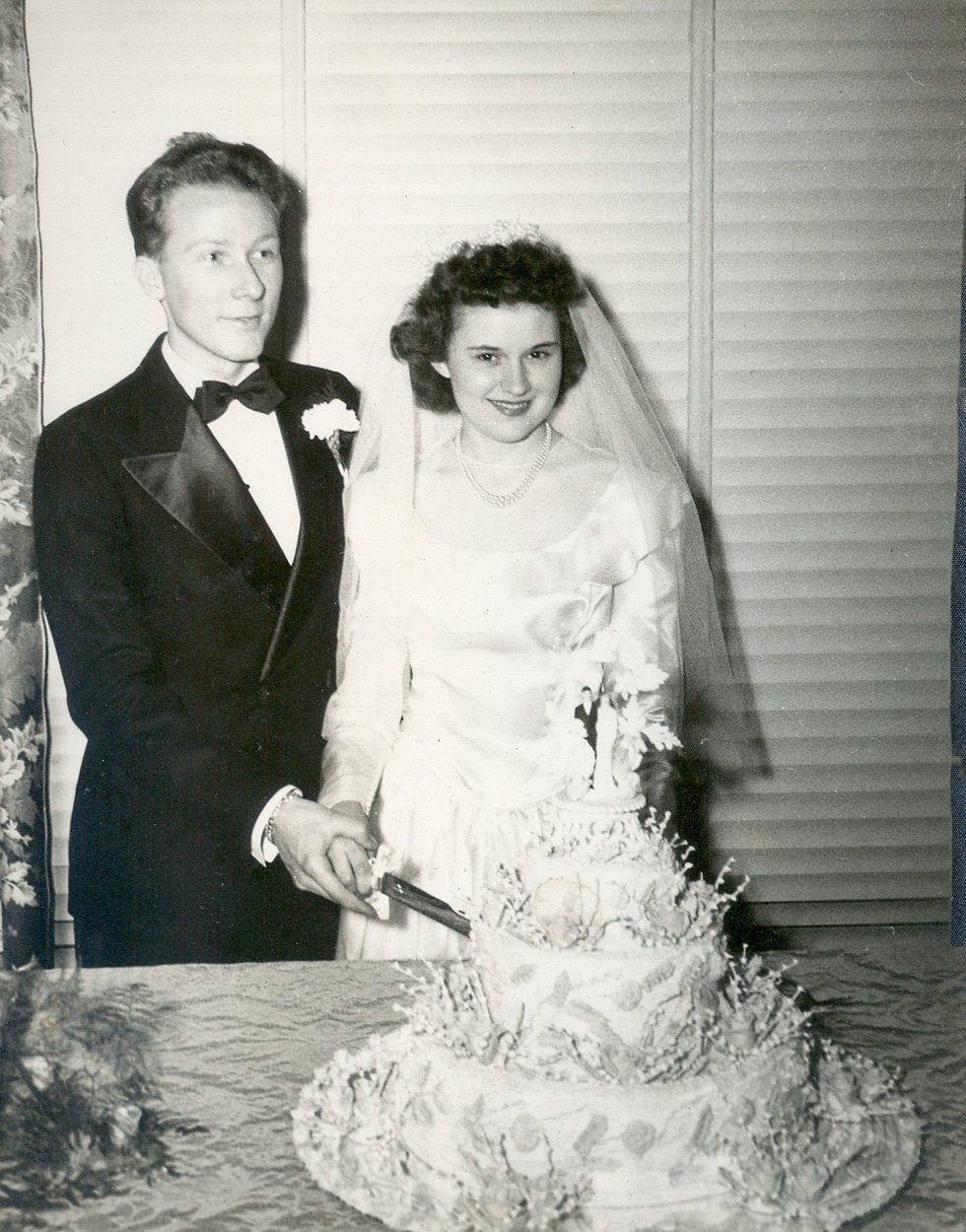 Nell gave birth to their first child the night before Cecil passed the test that would see him accepted into medical school. He became Dr. Cecil Prescott, helped open the psychiatric unit at Montgomery’s Jackson Hospital in the early 1960s, and spent more than 40 years caring for his patients.

Nell spent her time composing the lives of their three children, all girls.

“She raised us, and she loved being home,” Fortson pointed out. Her refrain from seeking a paying job in place of the melody of cooing and baby rattles paid handsomely for Nell. Their three daughters have given them six grandchildren and six great-grandchildren, one of whom has since passed away. 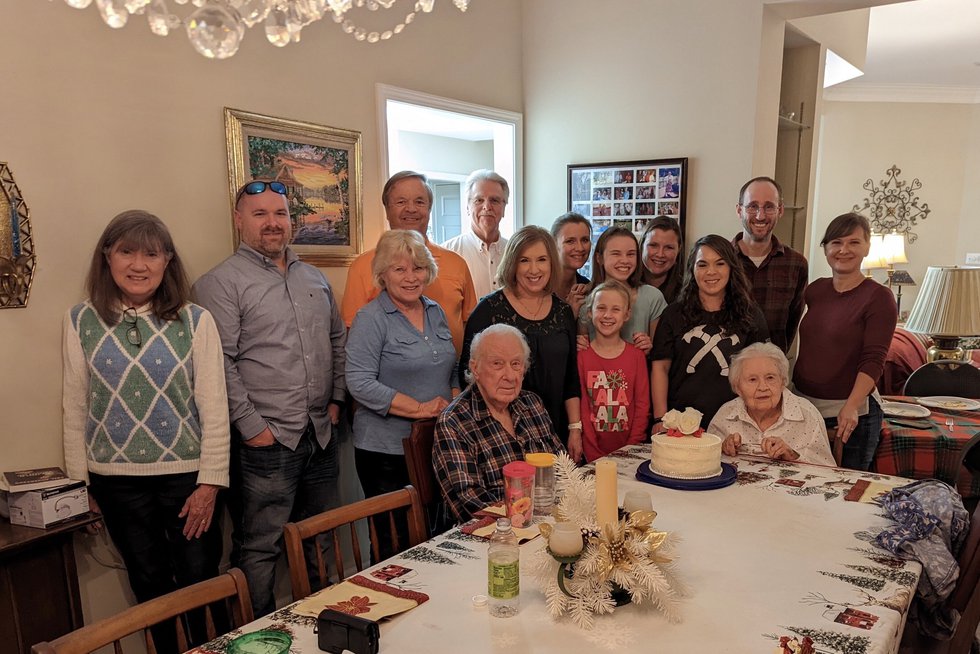 Dr. and Mrs. Cecil Prescott are surrounded by their family during a surprise 75th wedding anniversary on Dec. 27, 2021.(Source: Jehle Dean)

“There’s been no divorces, and I guess they taught us well,” Fortson beamed.

Mrs. Prescott, their daughter noted, “was a big worker with the Montgomery Medical Auxiliary” and also did a considerable amount of charity work.

Along the way, the Prescotts have started bands that are still playing to this day. They’ve given to the USO and children’s hospitals, socialized with friends, and once heard one of Dr. Prescott’s arrangements played by the legendary Glenn Miller Band.

To this day, Dr. Prescott still plays the saxophone, his daughter says, and he even tickled the ivory during Monday’s special occasion.

The couple stays home these days due to their advanced age and concerns over the pandemic, their daughter says. They watch the worship services of First Baptist Church of Montgomery, where they’ve been members for years, on television. 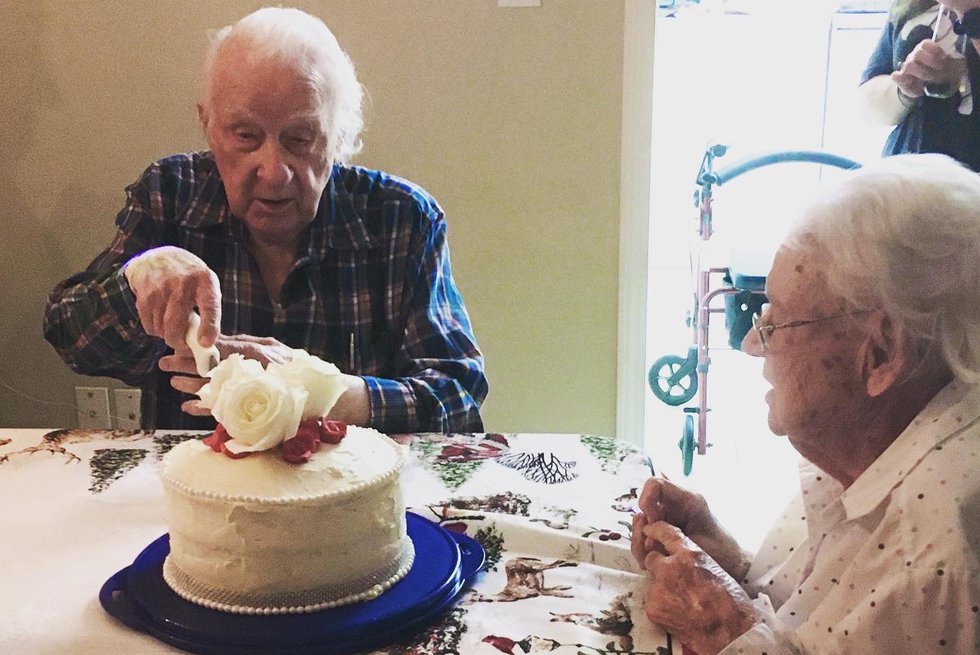 Though Dr. Prescott remains “sharp as a tack,” dementia is slowly playing the swan song of Mrs. Prescott’s life. His hand and loving presence are a constant, however.

“I know there’s times when we know she probably needs to be in a nursing home, but he won’t let her. He says ‘No, I’m taking care of her right here at home.’ So, we have ladies coming in day night for her,” their daughter says.

Monday was a special day, nonetheless.

“It was good. Most of the family got to come,” Fortson added. “She didn’t know who everybody was, but she did recognize a few, but she was happy with it, didn’t matter to her.” The couple even got to see some of the great grandchildren they hadn’t seen in years!

Like a well-balanced instrument, these two have carried themselves in a performance, without intermission, for the 27,349 days that make up a marriage of 75 years. In short, they’ve created a masterpiece.