It’s every bride’s dream to ensure her wedding day is as memorable as possible.

Whether it be a choreographed first dance, a champagne fountain, or a sweet family reunion — nothing beats a mid-wedding surprise.

One bride took this idea to the next level by organising an adorable gift for her new husband on their big day.

Newlywed Vora Quinn, from Tulsa in the United States, tells 9Honey she had a dramatic mid-wedding haircut after not chopping her long locks for 14 years.

“I became really attached to my hair so the thought of cutting it was so scary… I had no idea how it would look or how it would make me feel!” Quinn explains.

“Throughout 2021 I slowly decided that I was ready to make the change, but I also knew my now husband and I wanted to get married before 2021 was over and I really wanted long hair in my wedding photos.

“At first the plan was to cut it on our honeymoon in Hawaii, but then one day I thought… what better way to make the haircut go from something I was afraid of to something so monumental and exciting than to cut it on my wedding day, better yet in my wedding dress?” 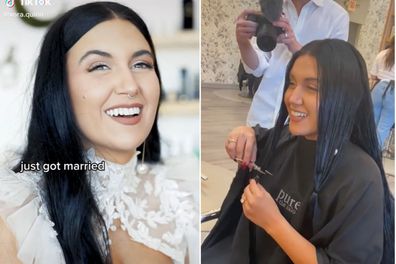 READ MORE: The best bargains in the Black Friday Sales

Quinn says she struggled keeping it a secret from her husband Justice, who she describes as her “best friend”.

After the ceremony, the bride told Justice she was going for a “quick hair and makeup change” and reappeared looking like a completely new woman.

Justice’s sweet reaction to her incredible hair transformation was a telling sign she made the right decision.

“My husband and I are best friends so not telling him details about my wedding dress and keeping the haircut a secret was so hard for me, but it paid off and I have no regrets!” Vora says happily.

“Justice’s reaction was everything! I had no doubt it would be, but the joy we had that day was unlike anything I’ve ever felt. I knew that he knew how big of a deal me cutting it would be and I also knew if I loved it, he would love it too.” 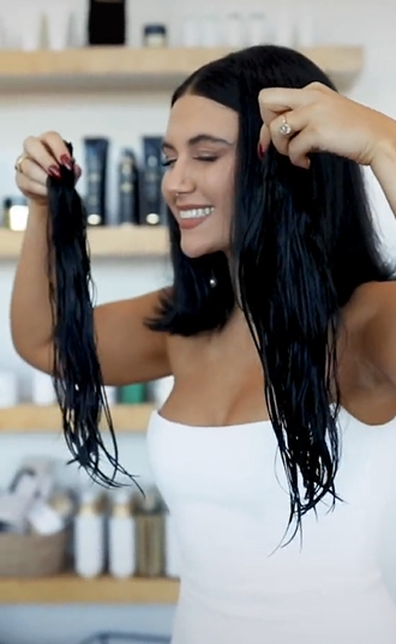 The newlywed took a hair and makeup break where she chopped her locks. (TikTok)

Quinn filmed the exact moment she revealed her new hairdo to her groom and posted the clip onto TikTok.

“Oh my god, it looks so good. When did you decide to do?” a delighted Justice asked his new wife, as they laughed and hugged.

The newlywed was stunned when the now-viral video attracted millions of likes and adoring comments.

“A lot of people commented on my video saying they would be scared their significant other wouldn’t react much,” Quinn said. 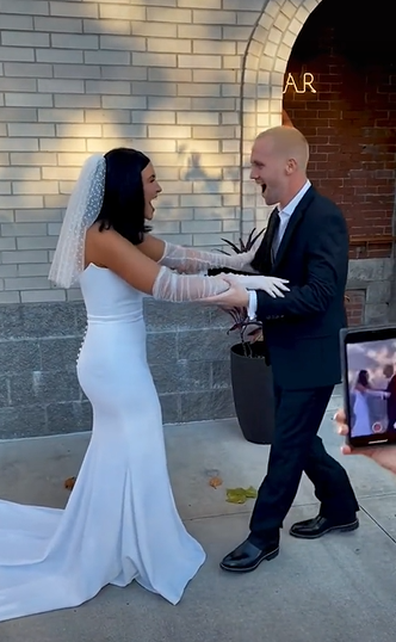 SURVEY: Tell us what you think about the 9Honey newsletter

“Honestly choosing to do it on my wedding day made it something to look forward to instead of something to fear. I always thought I would cry when I cut it, but because of how excited I was to show him I was just so giddy there was no time to cry!”

The newlyweds had an intimate ceremony with just their parents and siblings and hadn’t even told friends they were engaged.

Quinn says her loved ones were extra shocked when she posted pictures to social media of her short hair and elopement.

“Since we weren’t having any guests, we decided not to announce that we were even engaged on any social media, so the first pic we posted from our wedding was one where I had short hair so people were double shocked!” she says.

“It was so fun sharing moments of the day with people and getting their reaction.” 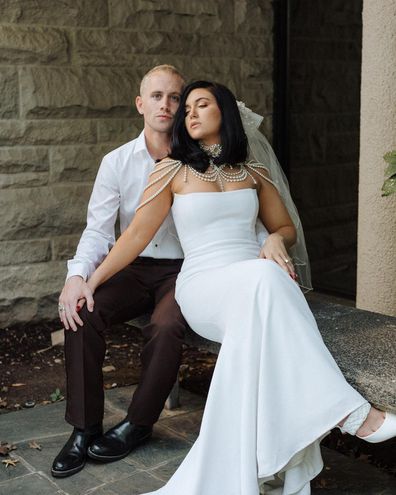 Quinn says she has no regrets about her mid-wedding haircut. (Britt Phillips Photography)

The glowing newlywed hopes her fun wedding idea might become a tradition for other brides with long hair wanting a big change.

Quinn has no regrets and is now basking in her honeymoon period with Justice.

“I would absolutely encourage this to anyone, especially girls who have been growing their hair out for a long time!” Quinn adds.

“I hope I see other people tag me in videos of them doing the same thing. Maybe it becomes a new tradition?”

The most extravagant royal weddings of modern times