Wedding days are supposed to be one of the happiest days of a person’s life. Sometimes the day doesn’t exactly work out as planned.

A newlywed couple in Parma, Italy had their wedding plans altered slightly after the groom decided to hop on a dirt bike. He was apparently hoping to impress his new wife with a grand entrance to the reception.

The groom instead lost control of the bike around a turn as he approached the wedding guests. This caused him to thrown from the bike.

That’s Going To Leave A Mark

The groom then slid across the road during the crash, rolled over, and ended up in a seated position. He appeared to be in a state of shock after the accident.

Onlookers who were witnessing his not-so elegant entrance are seen running over to assist the groom. He had to take a trip to the hospital for his injuries.

He broke his collarbone and needed five stiches on his head. 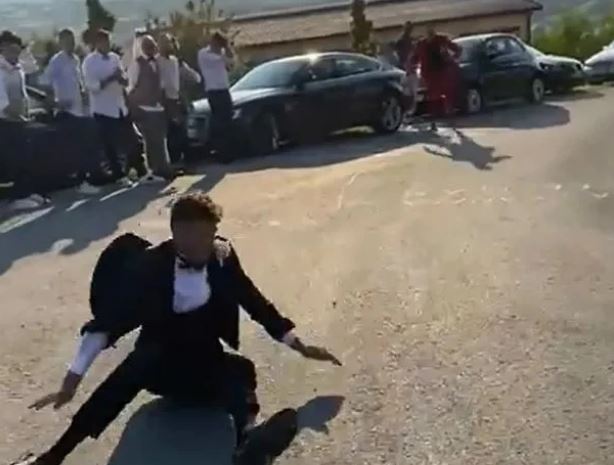 There’s nothing like testing those wedding vows right out of the gate. For better, for worse, even if the worse comes with a ruined wedding reception.

This clumsy groom’s new bride passed the test with flying colors. She went with him to the hospital with her wedding dress on.

This isn’t a great start to their marriage. It’s a memorable start for sure. I’m a romantic, so I choose to believe it’s a good sign that she followed him to the hospital and didn’t stay behind at the reception.