Jennifer Lopez and Ben Affleck  got married for the second time Saturday in an extravagant, star-studded ceremony at the “Gone Girl” actor’s sprawling Georgia home.

The couple tied the knot during a three-day celebration for friends and family at Affleck’s 87-acre riverfront estate near Savannah one month after spontaneously eloping to Las Vegas.

Lopez wore a couture Ralph Lauren dress made in Italy for the ceremony, which was officiated by celebrity life coach Jay Shetty. 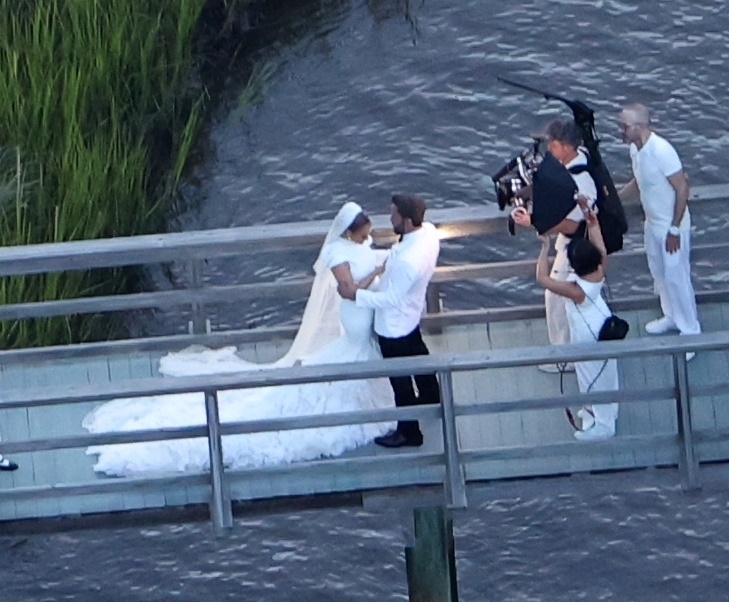 Lopez and Affleck tied the knot during a three-day celebration.BACKGRID 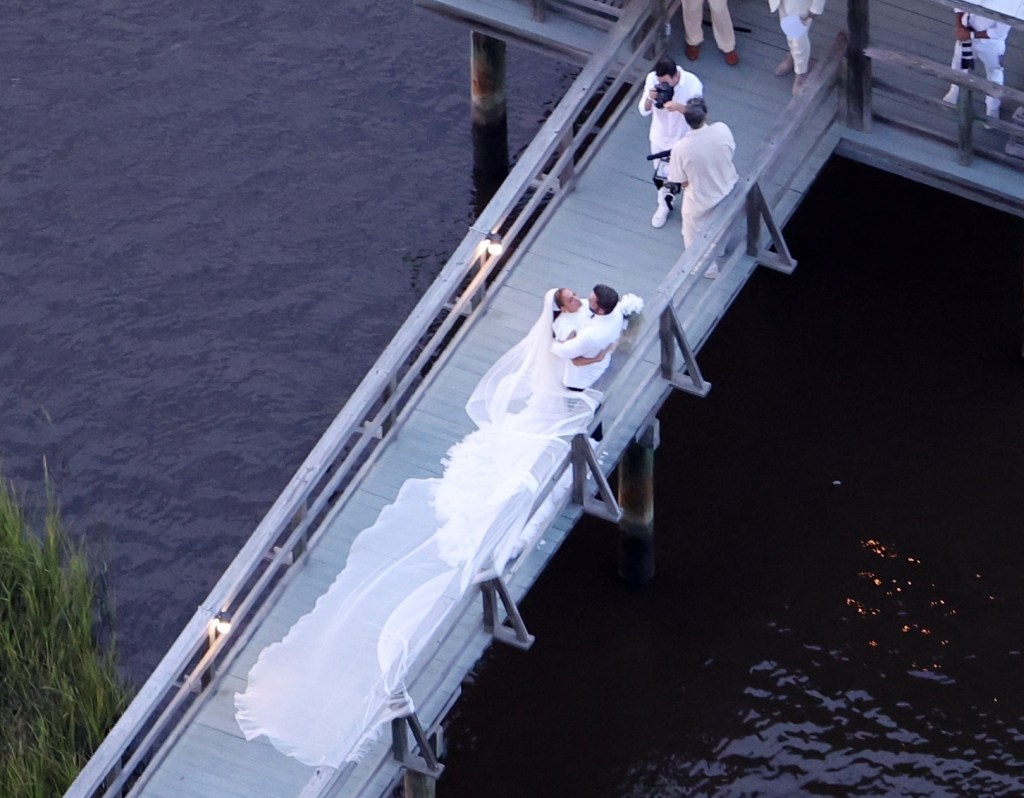 Lopez and Affleck share a moment during their wedding on Aug. 20, 2022.BACKGRID

The weekend-long wedding bash included a welcome dinner Friday, and guests are scheduled to be served a barbecue picnic on Sunday.

But at least one member of Affleck’s family was not in attendance. Younger brother Casey Affleck stayed in Los Angeles over the weekend, according to TMZ.

The lovebirds were spotted earlier Saturday. Video captured Affleck, wearing jeans, a tan shirt and with what looked like a  bag slung over his shoulder, climbing the grand exterior staircase of the home to Lopez, who — clad in a simple, strapless white dress — sat waiting at the top. The two could then be seen sharing a kiss.

White seemed to be the theme of the event.

Some guests arrived Saturday afternoon in white Old Savannah Tour trolley buses, while others came in black SUVs, handing over to guards what looked like invitations. The white cards appeared to feature a drawing of a bird, with its wings extended.

Guests, including director Kevin Smith — who posted a picture of himself on Instagram before the wedding — wore white. 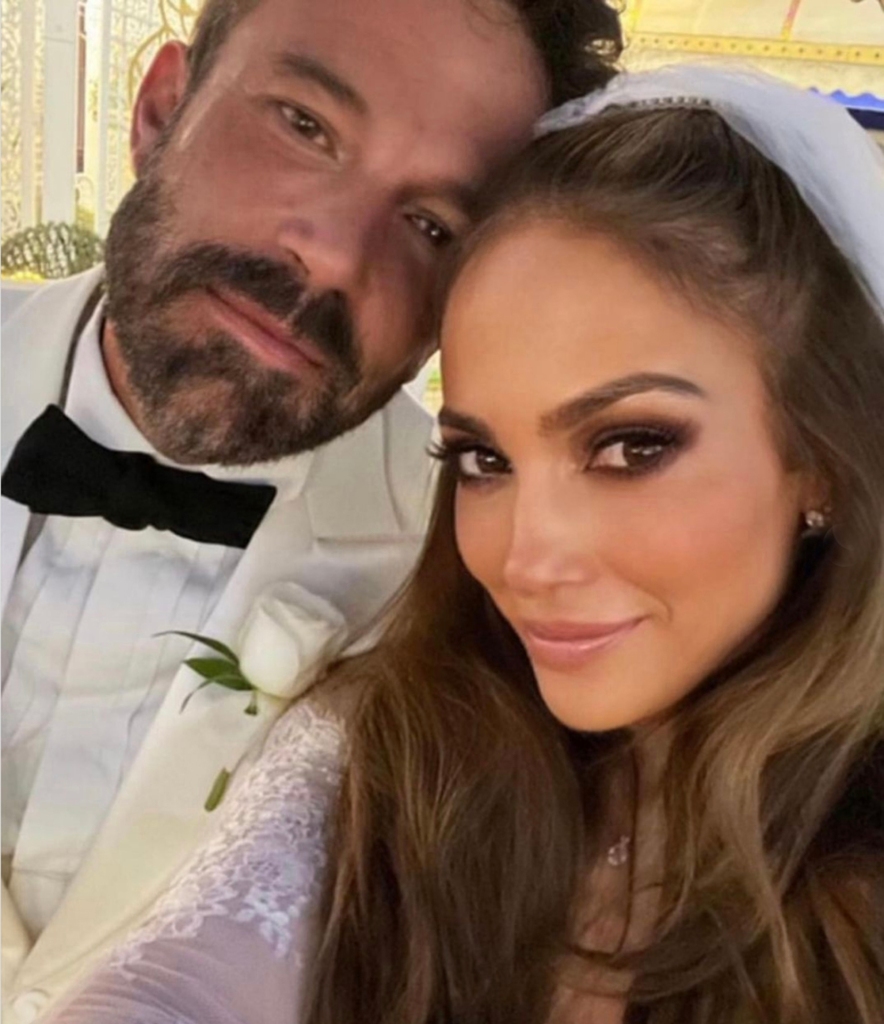 Affleck and Lopez got married in the “Good Will Hunting” star’s Georgia home.
OnTheJlo/Instagram 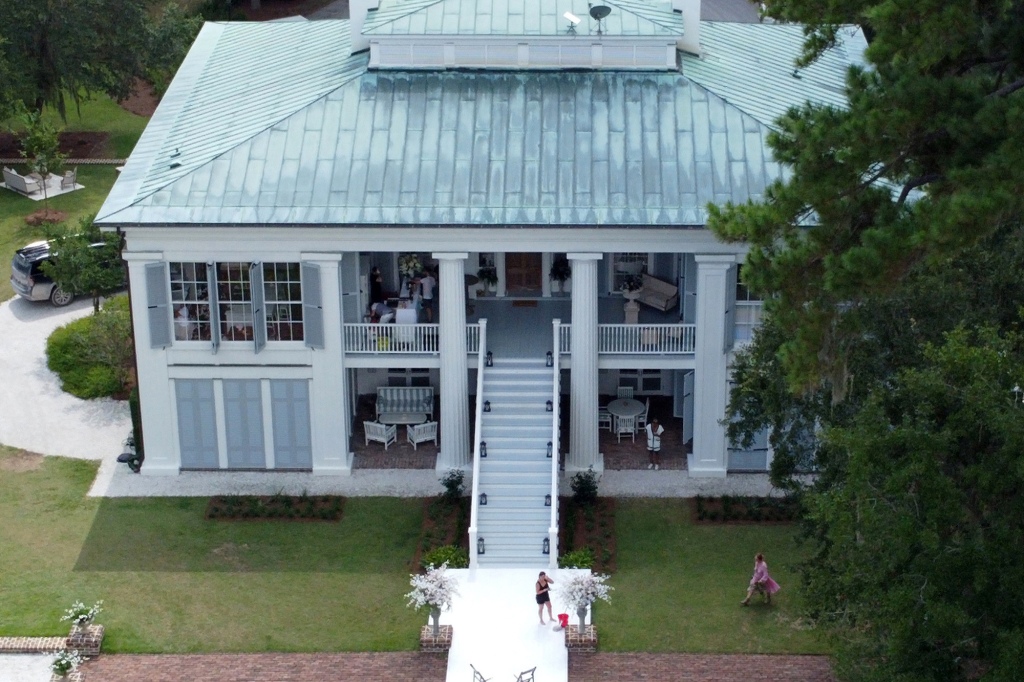 The venue for the wedding in Riceboro, Georgia.TheImageDirect.com 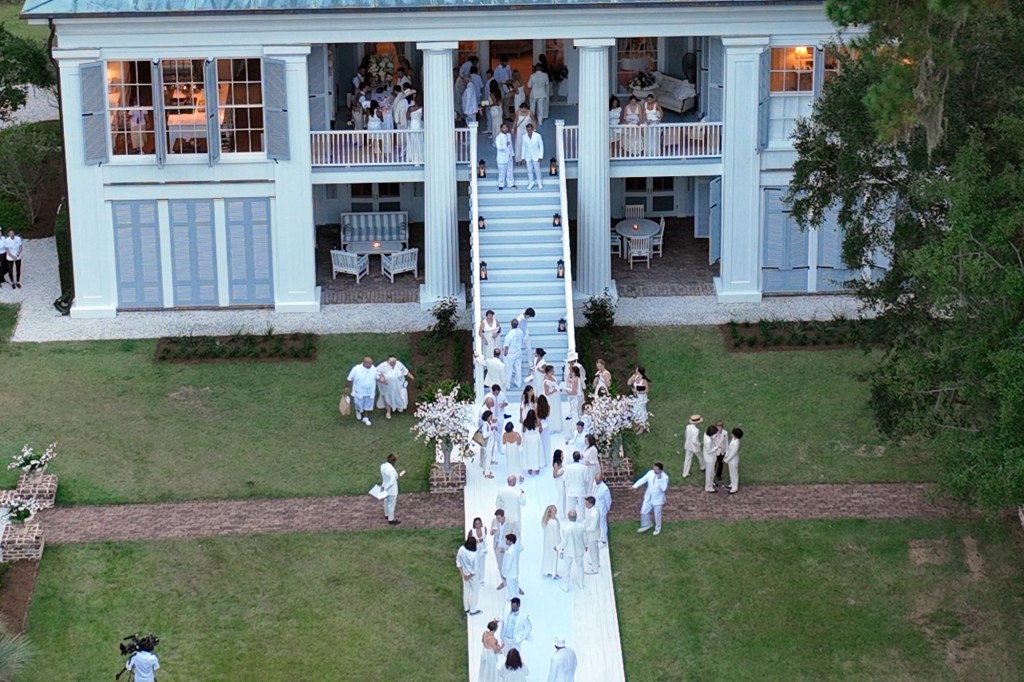 Guests all wearing white arrive to the cocktail reception.SplashNews.com

White flowers with long trails of green leaves cascaded over an open, outdoor seating area, which featured a white floor and white piano.

Aerial footage above the big bash showed guests were dressed in all white outfits as they gathered on a long white walkway to the actor’s house, where festivities appeared to be in full swing.

The couple first dated from 2002 to 2004, rekindled their romance last year, and announced their engagement in April. They got hitched at an intimate wedding at A Little White Wedding Chapel in Sin City on July 16.

The “Good Will Hunting” star, 50, and the “Enough” actress, 53, went on to celebrate their honeymoon in Paris, where they were spotted canoodling. 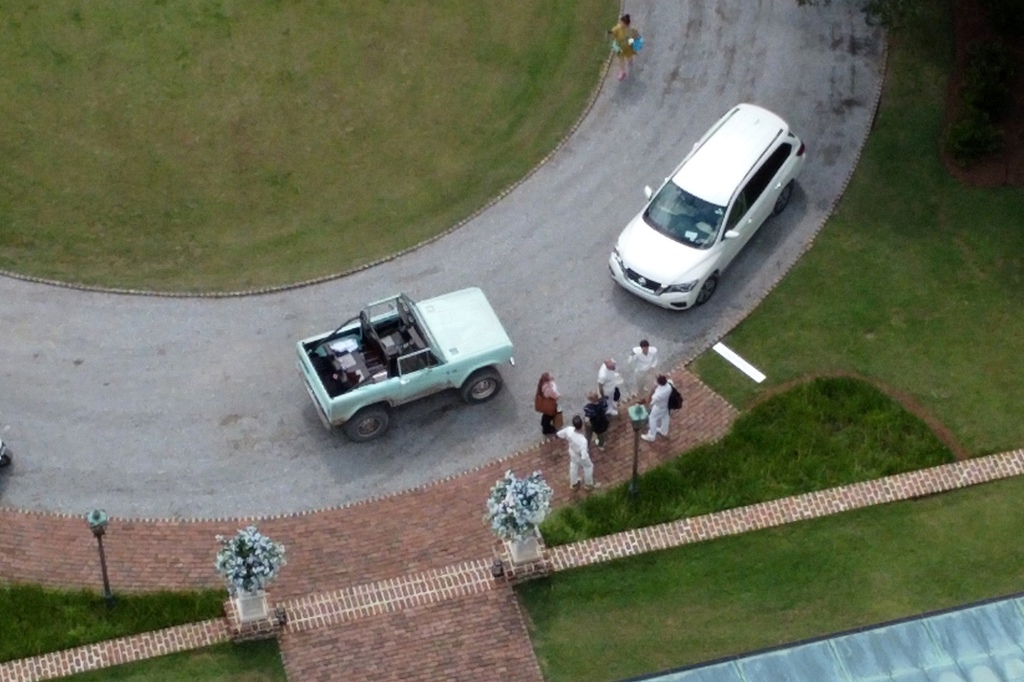 The final prep work before the wedding.TheImageDirect.com 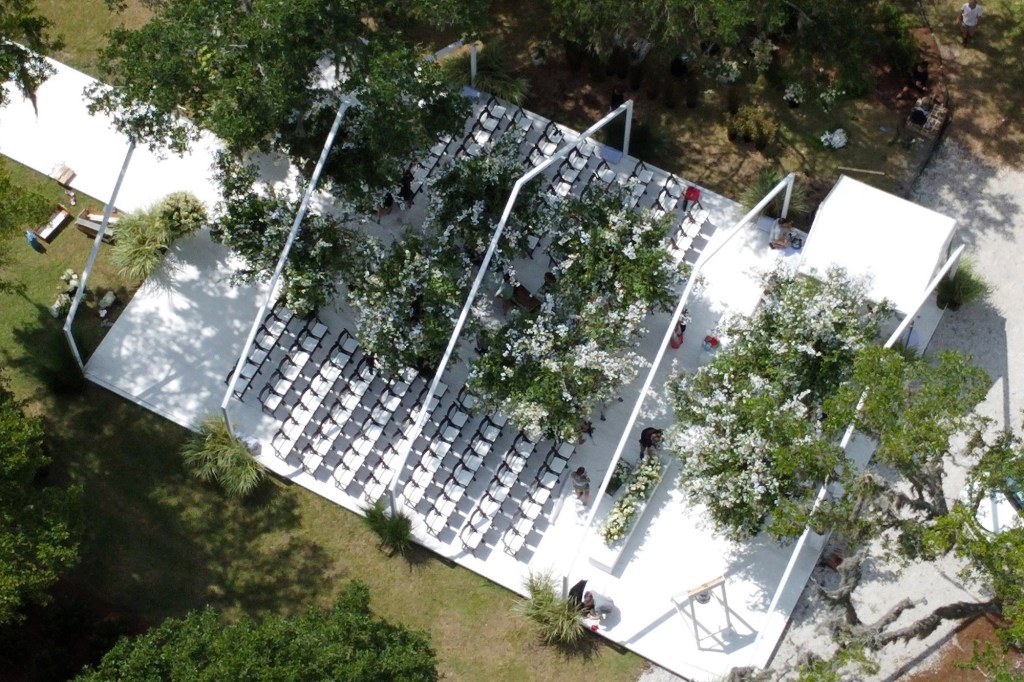 The wedding took place one month after spontaneously eloping to Las Vegas.TheImageDirect.com 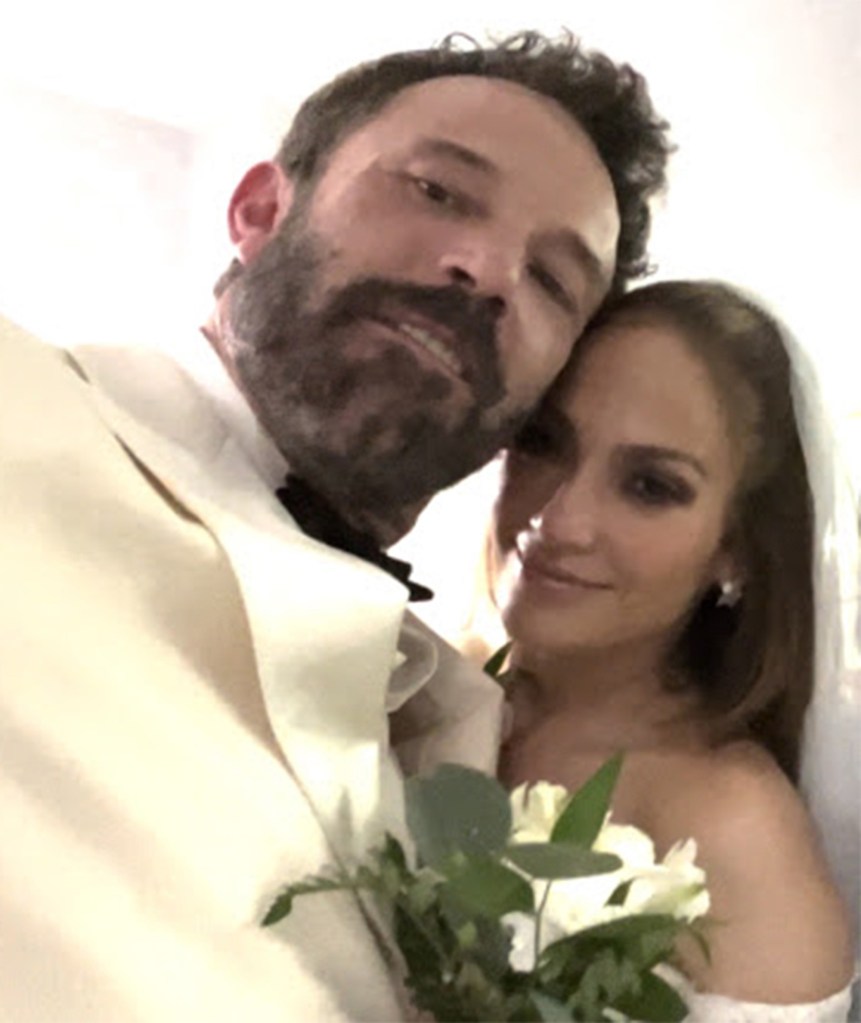 The couple originally dated from 2002 to 2004.
OnTheJlo/Instagram 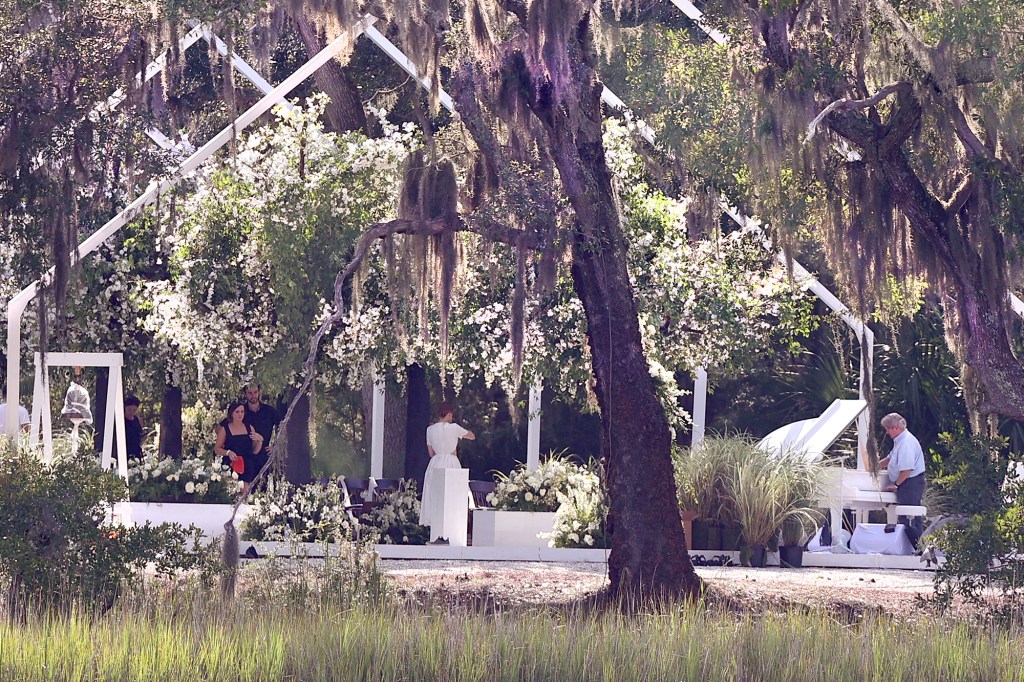 A scene from the preparation leading to the weekend wedding, including a white piano.SplashNews.com

On Thursday, a marquee was seen being constructed on the Oscar-winning actor’s property as workers prepared for the ceremony.

Security was tight throughout the day.

Guards blocked the entrance to Hampton Island, the exclusive enclave where Affleck’s compound is located. Guards checked IDs for anyone entering and gave out white paper wristbands, as a police officer sat nearby in a car labeled Liberty County Sheriff.

Authorities implemented a three-mile no-fly zone over the plantation-style home where the lavish wedding was held, according to the Daily Mail. The no-fly area stretched within a three mile radius of the property, the newspaper reported.

Security boats also patrolled the nearby North Newport River, which backs onto the property. 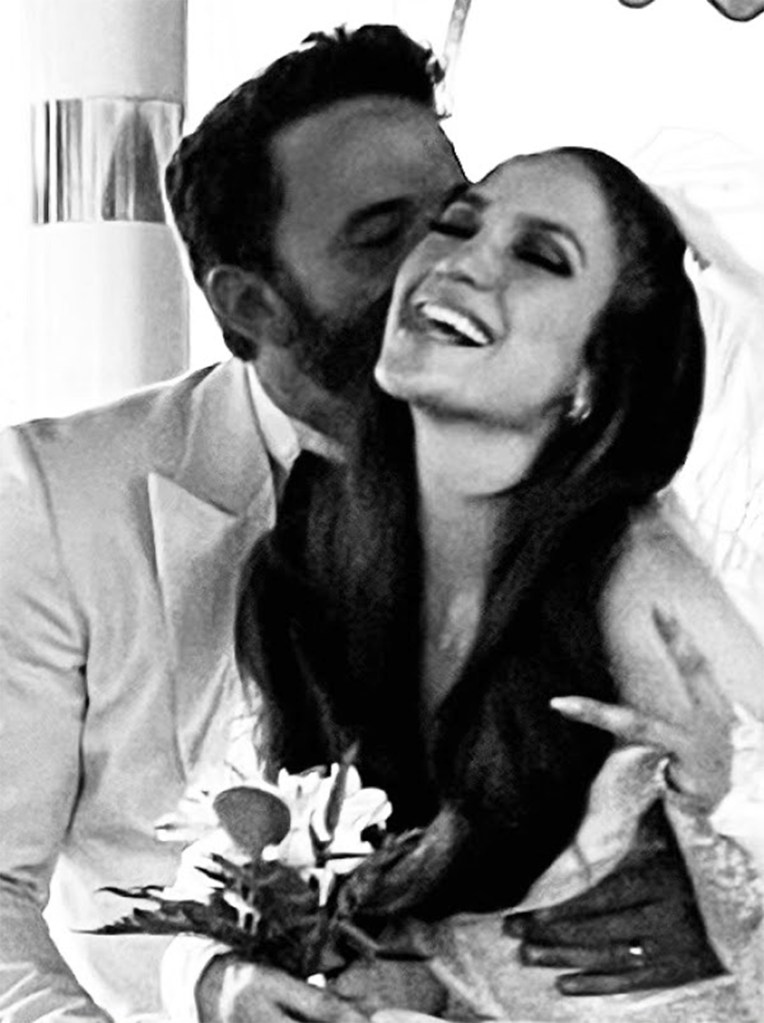 The wedding was attended by a star-studded group. On The JLo/Instagram 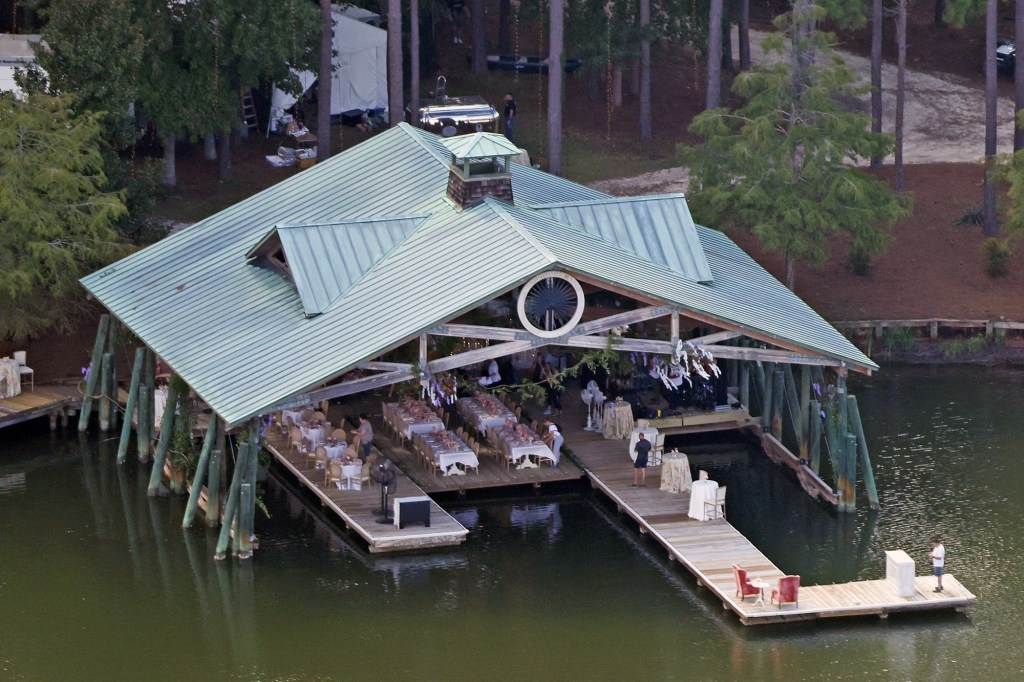 The wedding came during a three-day celebration for friends and family.BACKGRID 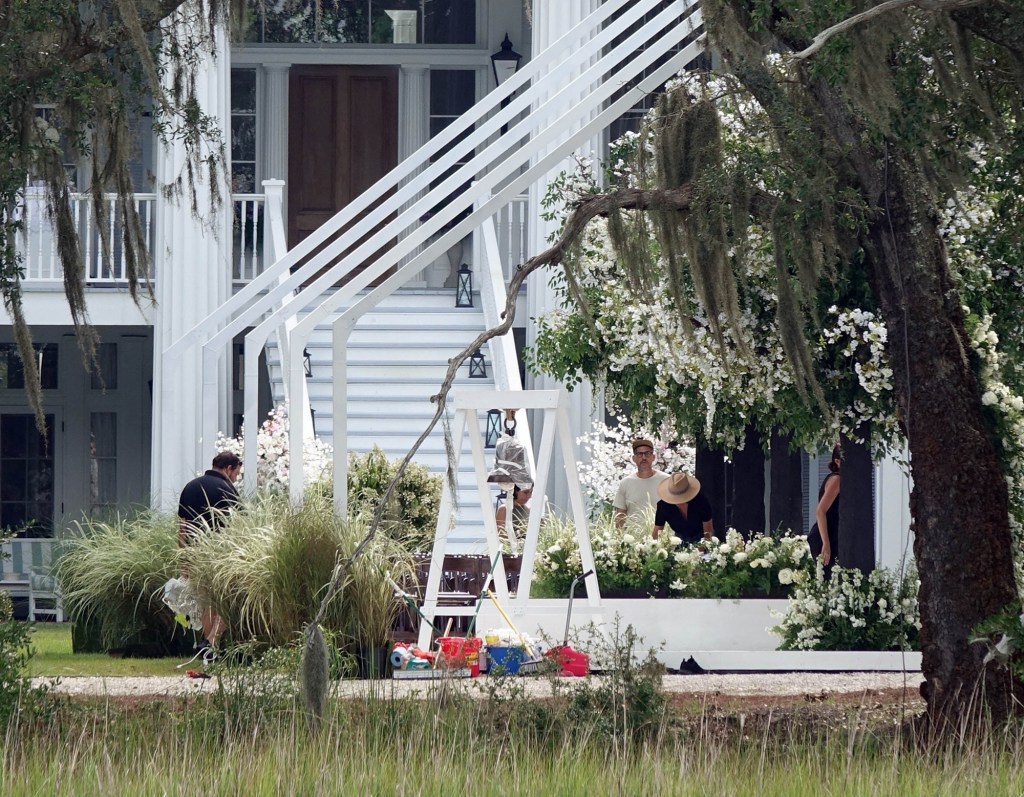 A “wedding bell” set up at Ben Affleck’s mansion for the couple’s big day.BACKGRID

Workers hustled to put the finishing touches on the estate required installing dance floors, special lighting, a raft for a fireworks display and patching up a potholed road. The price was estimated at more than $400,000.

Affleck has owned the property since 2003, which was designed by an Atlanta architect to resemble a southern plantation. It includes a 6,000-square-foot main home known as “the big house,” a 10,000-square-foot guest cottage, deep water dock and equestrian facilities.

The marriage to Lopez is Affleck’s second time tying the knot after his 2018 divorce from Jennifer Garner. Lopez has been married three previous times, including to Marc Anthony, the father of her twins; actor Chris Judd and producer Ajani Noa.

Joey Norris, a resident of Riceboro, said he’d like to meet Lopez one day.

“They tried it one time before, didn’t they? Fell out of love. Better luck this time.”