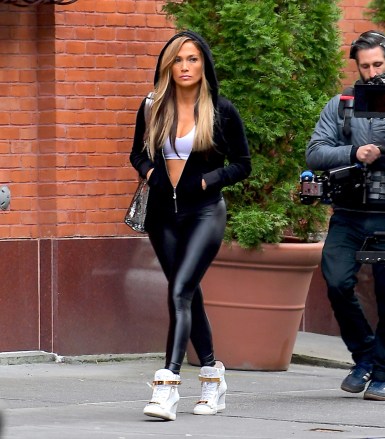 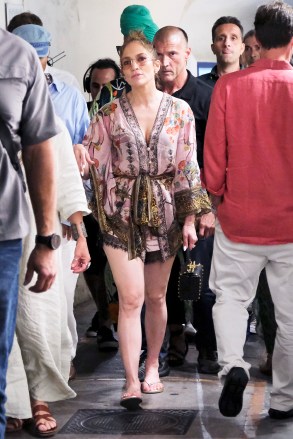 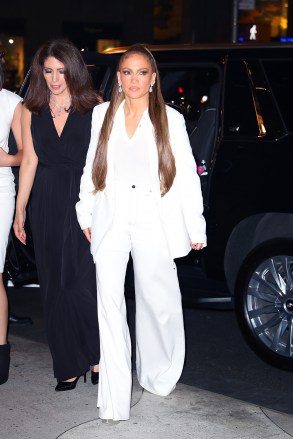 Jennifer Lopez has extended her stay in Europe! The 52-year-old singer and actress was spotted grabbing lunch in Capri, Italy with her team wearing a timeless white dress following her French getaway with Ben Affleck, 49, and their kids. The dress was reminiscent of one of the two she wore on her wedding day to Ben and featured a high neck, halter straps, and an A-line waist that gave way to a flowy skirt. The “Jenny from the Block” songstress kept her accessories simple to match the dress and donned a gold charm bracelet on her right wrist and gold hoop earrings. She completed the look with off-white flats and light brown shades. Her hair was styled into a sleek bun with a middle part. 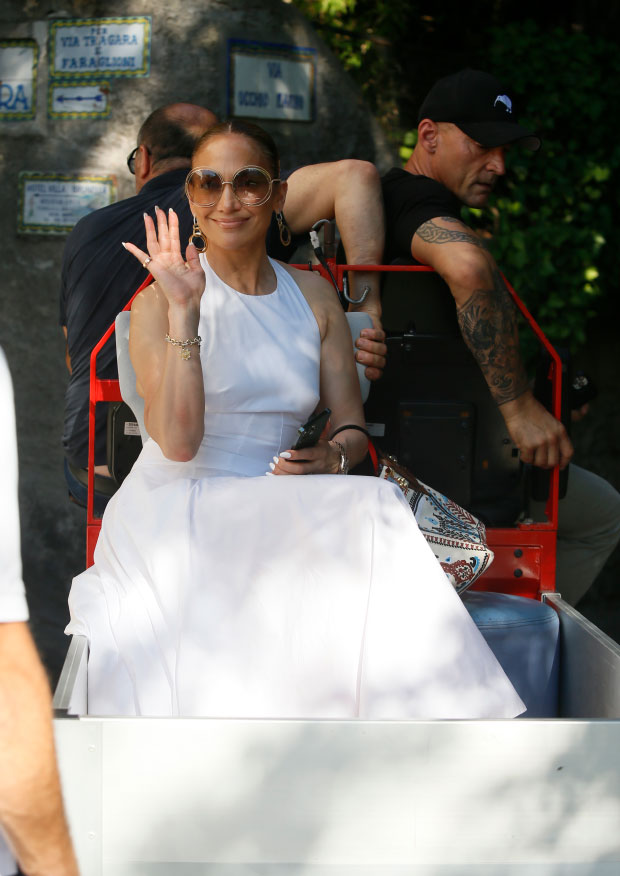 Jennifer Lopez smiled and waved at fans as she was carted away from lunch in Capri, Italy (Photo: MEGA)

J.Lo could be seen sipping on a beverage during her team lunch and was then driven away on a motorized cart. She graciously waved and smiled at her adoring fans as she passed. Jennifer is on the gorgeous Italian island — which has recently hosted a myriad of stars including Kris Jenner and longtime beau Corey Gamble, Mariah Carey, and Eva Longoria — for an upcoming charity gala called LuisaViaRoma for UNICEF that will raise money for the people of Ukraine, per Variety. Other A-list stars expected to make an appearance at the gala include Leonardo DiCaprio, Jamie Foxx, Naomi Campbell, and Vanessa Hudgens, among others. 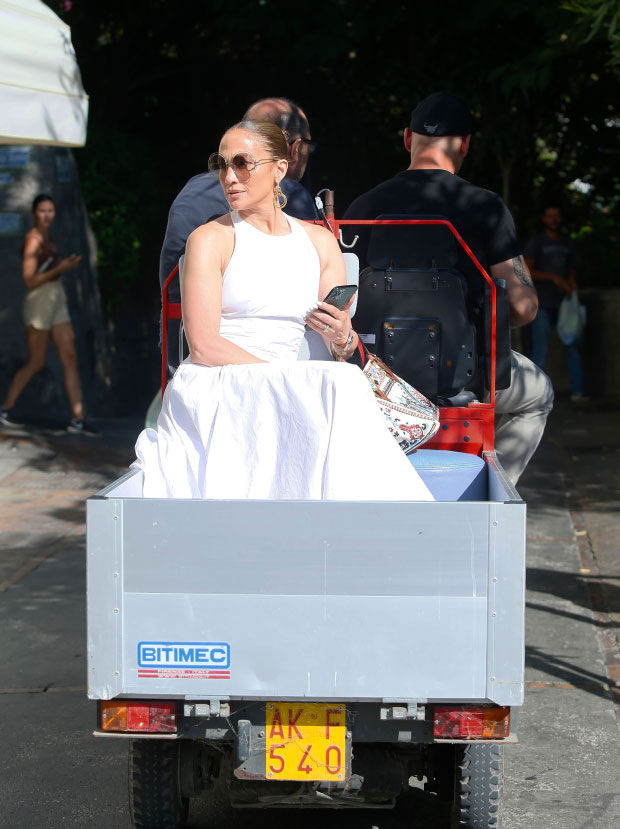 The Marry Me star and the Oscar-winning actor were first spotted in Paris at the Le Matignon restaurant on the night of July 21. Jennifer’s child Emme, 14, was spotted next to Ben’s 16-year-old daughter Violet, 16, and daughter Seraphina, 13, in the back seat of a vehicle that night as well. The trip seemingly marked the couple’s honeymoon after their surprise July 16 wedding in Las Vegas. The same bunch was then photographed a few days later enjoying a boat ride on the Seine River. Emme adorably cozied up to their mom and sat on her lap during the family outing. Jennifer also had a moment of PDA with her new hubby, as they were photographed sweetly holding hands. The family, minus Violet, was then seen on July 26 enjoying lunch in The City of Lights. Jennifer also has son Max, Emme’s twin, and Ben has a 10-year-old son, Samuel, who did not appear to join the Parisian trip.

The trip certainly helped the blended family grow closer as a unit, and an insider EXCLUSIVELY told HollywoodLife that Ben has formed a wonderful relationship with his stepkids. “The bond is very strong and genuine. It helps that his kids have been just as welcoming to Max and Emme because they’ve all become fast friends,” the insider divulged on July 26.

Furthermore, another Bennifer source, as the couple is fondly known, already confirmed to HollywoodLife that J.Lo is tight with Ben’s three children. “Jennifer Lopez is loved by all of Ben’s kids, but she definitely has a special bond with Samuel because Samuel is the youngest out of all five kids and is the baby of the bunch so to speak,” the source EXCLUSIVELY revealed. “When Ben and Jen (Garner) separated in 2015, Samuel was too young to remember any of it, but he has always grown up with two loving parents.”

Jennifer Lopez As A Bride: All The Times She’s Worn A Wedding Dress In Films