The hype around House of Gucci has been fizzing like a shaken champagne bottle since filming began. Images of actors Adam Driver (who plays Maurizio Gucci, scion of the luxury house) and Lady Gaga (his wife Patrizia Reggiani) eating a snack from a street vendor or frolicking in a rowing boat in Italy appeared earlier this year and fuelled excitement among fashion fans starved of cinematic and red-carpet candy. Vanity Fair declared it “the most mesmerizing movie you’ve never seen”.

“There was complete madness,” costume designer Janty Yates says of the press and photographers hanging around during filming. “It was just crazy every single day. I said to the producer, ‘We’ve got to get rid of the press, there are press guys up in that turret over there.’ But he said, ‘Why stop it? Any publicity is good publicity.’ And he was right, the word paparazzi is Italian, after all. Lady Gaga never minded.”

Indeed, Gaga was amping up the anticipation. In March, she put an image on Instagram of herself and Driver in jet-set 1980s après-ski wear: her in a polo neck, fur hat and gold necklaces, him in a cable-knit the colour of fresh alpine snow. By October, these chalet looks had been adopted as Halloween costumes. So far, so fabulous, but do the costumes really communicate that decadent dollop of la dolce vita we are all craving? As the cringey Sex and the City 2 demonstrated, fabulous clothes alone won’t hold a movie. 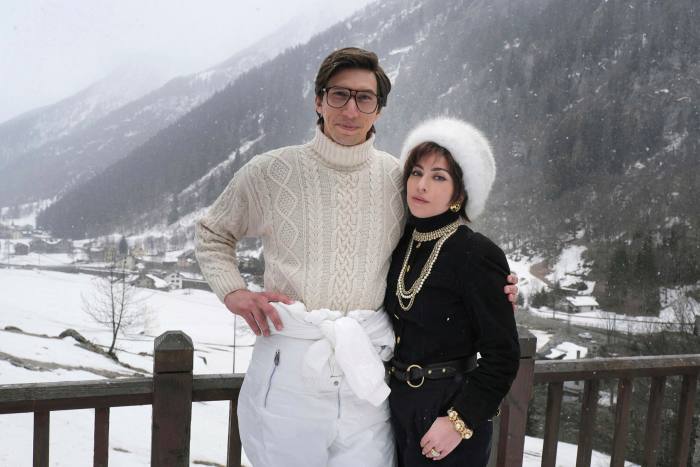 Fortunately, House of Gucci, directed by Ridley Scott and adapted from the compelling book by Sara Gay Forden (first published in 2000 and re-released to coincide with the film) is also a dramatic tale of a family jostling for power, passion, betrayal, excess and brutal revenge. Think Shakespeare meets Succession, with logos.

It’s based on the true story of how Patrizia Reggiani, who worked for her father’s trucking company, met Maurizio Gucci at a party in Milan in 1970, then married him in 1972 against the wishes of Maurizio’s father Rodolfo, who suspected (correctly) that she was a social climber. The pair moved to New York, became involved in running Gucci and lived the designer dream until the family clashed over the management of the business. The couple’s relationship imploded, they divorced, and in 1995 she hired a hitman to murder him. 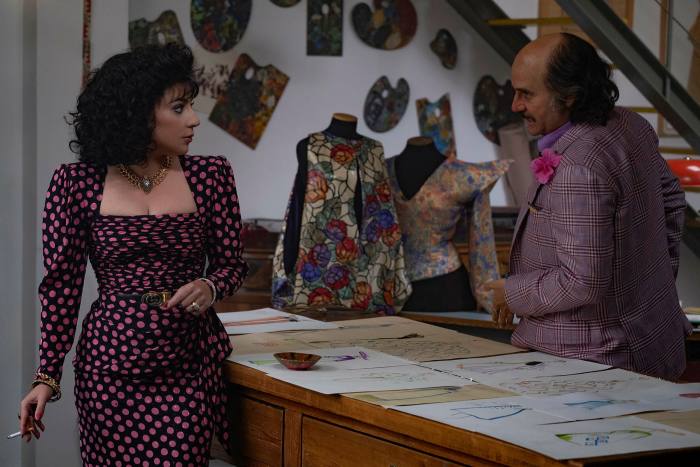 Lady Gaga in a figure-hugging dress, in a scene with Jared Leto as Paolo Gucci © Fabio Lovino/Metro-Goldwyn-Mayer Pictures

In the film, Patrizia’s wardrobe conveys the evolution of her character from socially ambitious — or avaricious, depending on your point of view — single woman to luxury-house diva to wrathful wronged wife. Yates, who has worked on a number of films with Scott, including Gladiator and Hannibal, says, “Patrizia had the Joan Collins taste in jewels. She was drenched in jewels. However, Ridley’s initial brief . . . was that he wanted her more sober, more Gina Lollobrigida rather than Joan Collins in Dynasty.”

Patrizia becomes ever more expensive-looking and extravagant as the film progresses. When we first meet her in the early 1970s, her clothes are sexy but slightly homely — for early dates with Maurizio she wears a brown shirt dress with white polka dots, and later a checked, belted trench coat with a rather bourgeois Italian housewife scarf. By the 1980s and early 1990s, she’s in maximal mode: figure-hugging ruched dresses, boxy jackets, extravagant fur coats and enough gold to make a Medici look minimalist. 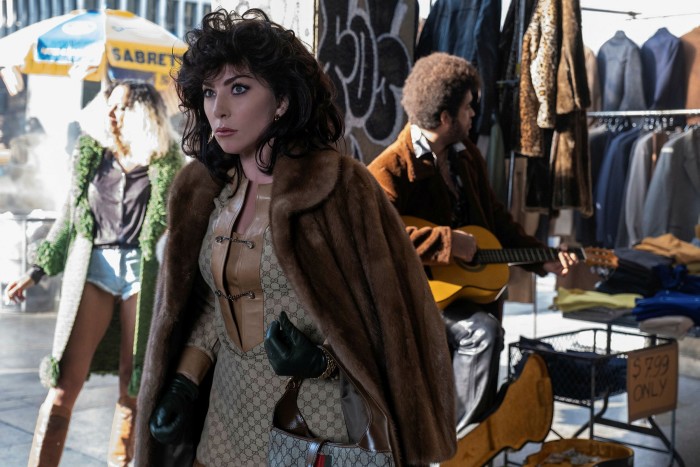 The real Patrizia was known for extravagance. In the 1970s her chauffeured car had the number plate “Mauizia”, combining the power couple’s names, and she once said she would rather “weep in a Rolls-Royce than be happy on a bicycle”. In the 1980s the couple bought a 208ft yacht once owned by Greek tycoon Stavros Niarchos, which Patrizia had exorcised by a psychic because, Forden writes in The House of Gucci, she felt the tragic deaths of two of Niarchos’s wives had “cast a negative aura over the boat”.

Other costume changes happened spontaneously. In the scene where Patrizia first meets Maurizio, at the Milan party, Yates recounts how Scott took issue with the ankle-length red satin dress Gaga was wearing, exclaiming, “‘I don’t want this, I want to see legs.’ So we put her on an apple crate and we cut 18 inches off the bottom of the dress there and then, with five camera crews standing there drumming their fingers, then shot the scene. Only Ridley would do that.”

When it came to Lady Gaga’s involvement in her costumes, “she was so on it, we had over 60 hours of fittings, which is quite a lot. She would live every scene, she would say, ‘This dress has been winking at me off the rails.’” Gaga contributed to her character’s increasing bling-nificence by requesting more bracelets and brooches. This suited Yates just fine because she “wanted to do her slightly over the top”. Gaga, she confirms, “was in character in fittings. She did get kind of taken over, which is no bad thing.”

Lady Gaga had 54 costume changes and didn’t want to repeat anything, not even a belt. The clothes included a mix of replicas and new outfits made by cutter Dominic Young and his team, who copied “about eight or nine” looks exactly. Patrizia’s wedding dress isn’t historically accurate — the duplicate looked too “plain and simple”, so they created a more glamorous version. The costume team also went to vintage stores and costume houses such as Tirelli in Rome (which has provided costumes for films including Death in Venice and Marie Antoinette), while Boucheron and Bulgari lent some of the jewellery, Lady Gaga lent clothes from her own collection and Gucci granted access to its archives.

Maurizio’s impeccable, Savile Row-style suits were made by New York tailor Leonard Logsdail, who has worked on Succession, and also by Zegna. Even in the power-shouldered 1980s they stay pretty fitted and sleek.

The real star of the movie is, of course, Gucci. Although the brand had no creative involvement beyond lending items and allowing filming in the Rome store, it has capitalised on the momentum by holding a recent catwalk show on Hollywood Boulevard and dressing stars Lady Gaga and Salma Hayek for some of the movie’s premieres.

The vision of a family competing for control — and the tragic ending — doesn’t tarnish the brand, especially as it is no longer owned by the fractured family. A pair of Gucci loafers once worn by Cary Grant have a starring role, the camera lingering over their proud gold snaffle. As Maurizio warns his wife: “Gucci is like a cake. You have a taste, and then you want more.” House of Gucci: morality tale meets ad campaign. And very entertaining.