Meghan Markle is “trying to mess up the royal family” and Princess Diana would be “deeply shocked” at the current state of Prince William and Prince Harry’s relationship, according to the designer of Diana’s wedding dress.

David Emanuel, one half of the design team that created a number of Diana’s most iconic dresses throughout the 1980s, recently provided his assessment of William and Harry’s relationship and how the princess would have responded, on the 25th anniversary of her death on August 31.

Speaking to GB News host Dan Wootton, Emanuel, who recently hosted TLC’s Say Yes To The Dress U.K., said that the anniversary had been “a day of reflection,” and that it had been “lovely to see people putting flowers down and remembering” Diana who he called an “icon of empathy.”

“I think she would be deeply shocked,” the designer said of the princess’ potential reaction to the reported royal rift that has developed between her two sons.

“I think if she was alive it wouldn’t have happened with the two brothers. She wouldn’t have allowed it,” he said. “She’d have smoothed the waters.”

When asked by Wootton, a vocal critic of Harry and Meghan’s, what the princess would have thought of Harry’s choice of wife, Emanuel responded: “What, the American woman?”

“We’ve got Prince William who’s doing a splendid job and we’ve got Harry Windsor in America with an American woman who is driving everybody nuts,” Emanuel said,

He then continued to claim that Meghan “messed up her own family, now she’s over here trying to mess up the royal family. It’s shocking.”

This is not the first time that Emanuel has openly criticized Meghan or referred to her as “the American woman.”

When asked by a Daily Mail columnist in July what he thought of the duchess, the designer said: “You mean the American woman? I can’t utter the name now.”

He also criticized the royal’s choice of outfit of a pale Christian Dior coat dress for the queen’s Platinum Jubilee service in June saying that she was “channeling Wally Simpson” and “looked as if she was in a nurse’s uniform.”

This reference to “Wally Simpson” relates to Wallis Simpson, the woman who King Edward VIII abdicated the throne for in 1936 and who after her marriage became the Duchess of Windsor.

Wallis was born in Baltimore and her American heritage was often used against her in a derogatory manner as the British public blamed her for the popular king’s abdication and separation from the royal family. 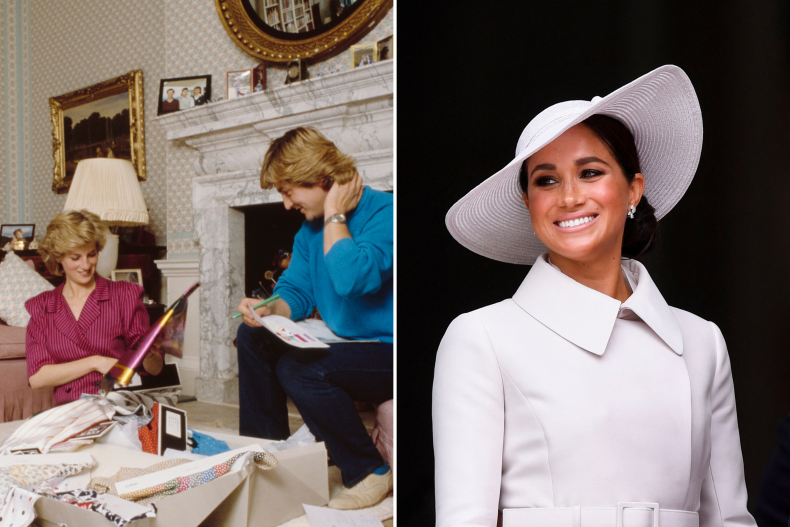 Emanuel’s criticism comes as a number of royal commentators have drawn links between Meghan and Diana around the time of the milestone anniversary since the princess’ death.

Last month, former Tory MP David Mellor said that Meghan thought she would “become Princess Diana overnight” when she married into the royal family in 2018 but claimed she didn’t show the willingness to do the “dull” work required.

“Unfortunately, she seemed to think that she could drift into the royal family and become Princess Diana overnight,” Mellor continued. “In my time as a minister and politician, you see a lot of members of the royal family in action, and a lot of it is a pretty dull job actually…The point is it’s not glamorous, and you feel with Meghan that it was a big disappointment.”

Diana biographer Tina Brown also recently commented on Meghan and Diana, speculating, like Emanuel, how the princess would have responded to her son’s marriage and where his relationship with William currently stands.

“I think she would have felt Meghan was steering Harry in a direction that was not good for Harry. I don’t think Diana would have been the great fan of Meghan that Meghan herself might perhaps imagine.” 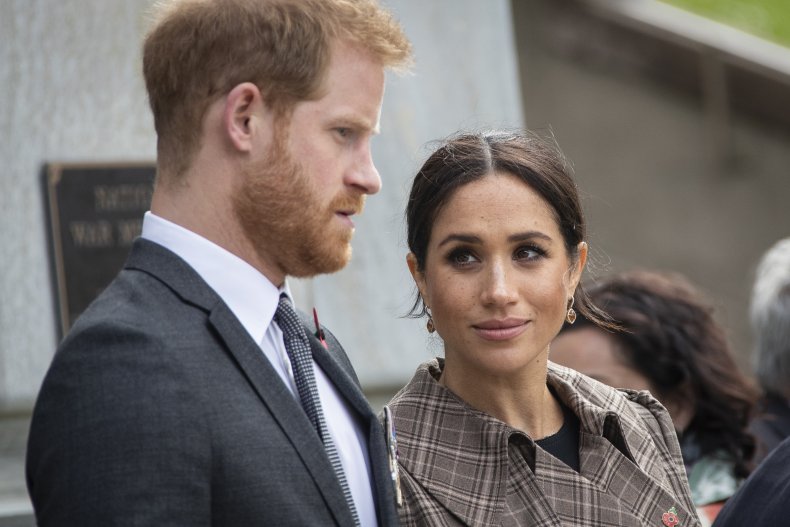 Prince Harry and Meghan Markle photographed October 28, 2018. Biographer Tina Brown commented that Princess Diana “would have felt Meghan was steering Harry in a direction that was not good.”
Rosa Woods – Pool/Getty Images

Both Harry and Meghan are due to visit Britain next week to attend a number of charity events and they will also travel to Germany to mark the one-year waypoint to the 2023 Invictus Games in Dusseldorf. Royal commentators have speculated that a reunion between the Sussexes and the rest of the royal family on this occasion would be “unlikely.”

Newsweek has reached out to Emanuel in addition to representatives of Meghan Markle for comment.