MITCHELL — The Mitchell City Council paved the way for the former Kelley property to transform into a wedding venue after approving the buyer’s conditional use permit on Monday night.

Heading into Monday’s council meeting, the stakes of the decision for the conditional use permit were high. The still-anonymous buyer behind the $1.59 million approved offer on the property – which includes the 10,095-square-foot home and a large multi-use building – stipulated the conditional use permit for the wedding venue had to be secured for the sale to be finalized.

Although the buyer’s plans sparked opposition among some nearby residents who were concerned about the potential noise, traffic influx and public safety matters, the council unanimously approved the permit.

At the Sept. 12 city Planning and Zoning Commission meeting, over a handful of residents voiced opposition. That number depleted to just two residents who spoke at Monday’s council meeting.

Shirley Thompson, who purchased a property neighboring the former Kelley home, reiterated her concerns of the potential influx in traffic that the roads could see during weddings and how noise would be regulated.

“There is already a lot of traffic on those roads. We will have livestock on this property, and I have four children, and so if there is going to be partying until 11 p.m. at night I have some deep concerns,” Thompson said.

In the scenario a band was playing outside during a wedding, Mayor Bob Everson said a special event permit would be required for the band to play live music after 11 p.m. The city’s noise ordinance goes into effect at 11 p.m. and outlines the decibels that constitute as noise violations.

Don Petersen, a Mitchell attorney representing the buyer, sought to alleviate concerns and emphasized that any buildings on the property that transform into an assembly hall for weddings and events will be subject to meet the city’s building codes.

“I know there are neighbors who have concerns. But whatever is out there will have to meet the city’s codes and requirements, including noise ordinances. Once they have that (permit), they will move on to phase 2 which is designing what it will look like and present those plans,” Petersen said, noting the city’s building inspector would be tasked with signing off on the building plans and ensuring the city’s codes are met for assembly hall codes. 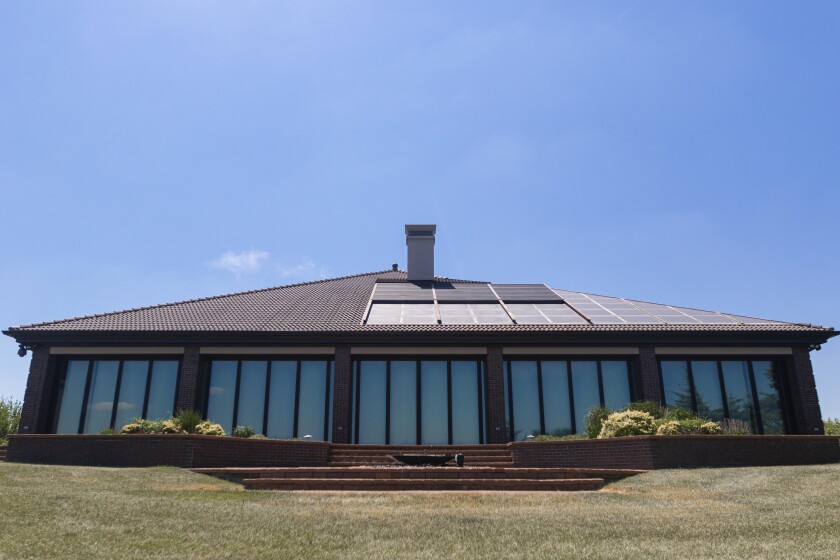 Shown here is the back of the Kelley home and the retractable roof portion of the house.

Loren Van Overschelde, a longtime nearby resident, brought forward some new concerns on Monday over what could happen if the property ceases to continue the wedding venue operation.

Van Overschelde’s questions shifted more the discussion over to the zoning of the Kelley property and it being located adjacent to agriculture zoned districts in Davison County.

The council unanimously approved the $1.59 million offer on the Kelley home in June, which included around a dozen acres of land surrounding it and a large accessory building.

The buyer’s request for the conditional use permit came as no surprise to the council, as Brian Eliason, the Mitchell real estate agent facilitating the sale, explained the buyer’s contingency of securing the permit for the sale to be finalized.

Considering the immaculate home with a retractable roof and a heated driveway sat on the market for two years, paired with multiple price drops, selling the home has been a shared goal among city leaders.

Acquiring the home was not the intention of the city’s $4.1 million land purchase, which included 371 acres and the portion of the property with the home and multi-use building. The land buy was solely done for the upcoming wetland project that’s aiming to reduce the nutrient loads and runoff flowing into the lake via Firesteel Creek. However, the former homeowner stipulated the home must come with the land purchase.

With the council’s approval of the conditional use permit, it brings the sale of the home one step closer to being finalized.