It seems that Katie Maloney is ready to move on even if her estranged husband Tom Schwartz isn’t.

The reality television star, 35, stepped out in a black t-shirt with green lettering that read ‘Tramp Stamp Granny’s’ on the front and a pair of black leggings as she made her way to a friend’s house in Los Angeles on Thursday.

She walked in a pair of black and white checkered sandals, dark sunglasses and a short black bob that stopped just above her shoulders.

Moving on: It seems that Katie Maloney is ready to move on even if her estranged husband Tom Schwartz isn’t

Most noticeably, the star wasn’t wearing the wedding ring Schwartz, 39, bought her.

The pair, who were together for 12 years and married for the last two, announced their separation earlier this week.

While Katie’s already taken off her ring, Schwartz hasn’t been able to do so yet.

He was still wearing his wedding ring when he was seen in Los Angeles on Wednesday.

The bar owner flashed the gold band on his ring finger while getting out of his car as he stopped by a local liquor store.

Schwartz was spotted walking the couple’s two dogs Gordo and Butter on Thursday, and he still had the wedding ring on. 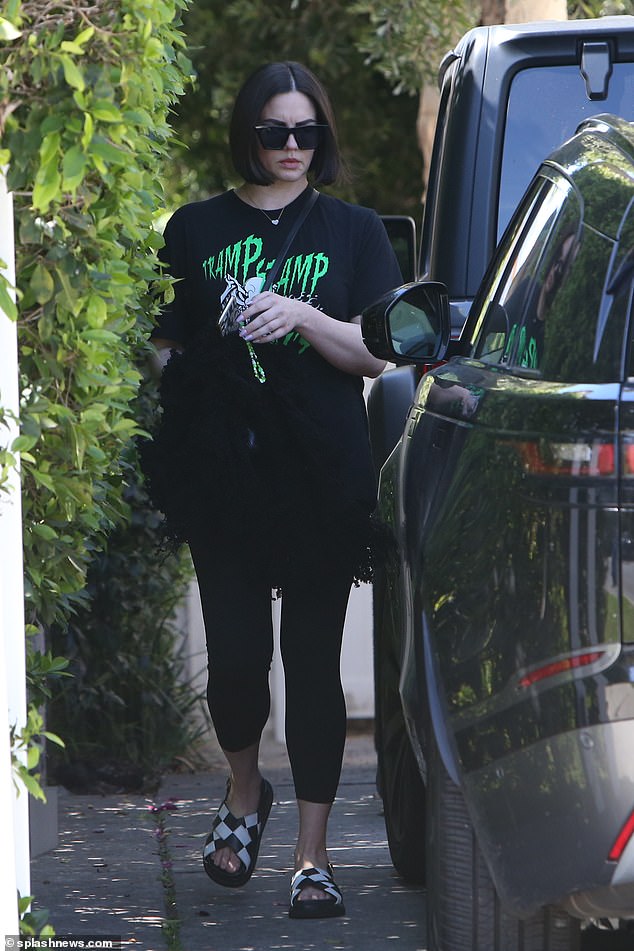 Ringless: The reality tv star, 35, stepped out in a black t-shirt with green lettering that read ‘Tramp Stamp Granny’s’ without her wedding ring on 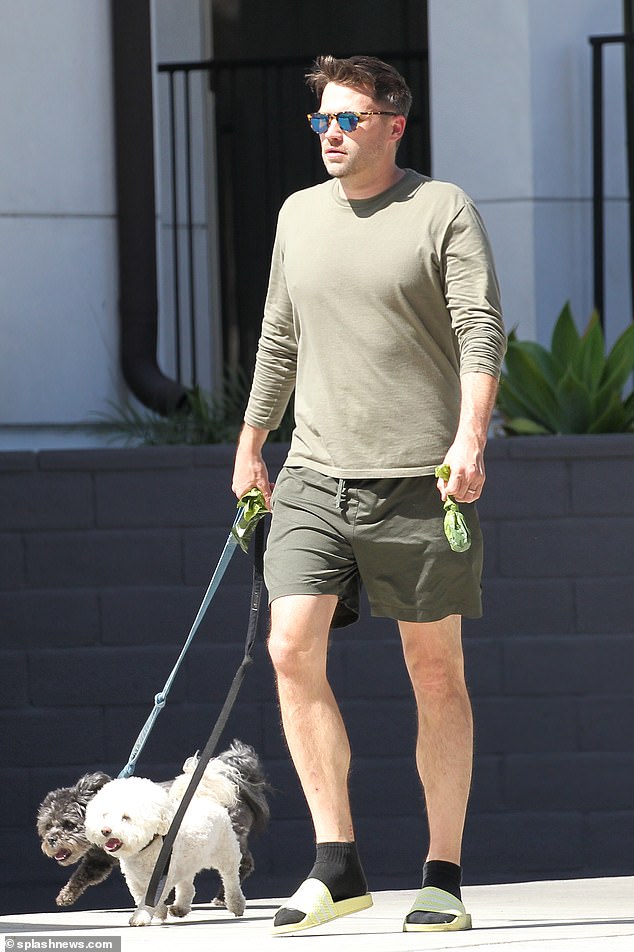 Holding out hope? Schwartz was spotted walking the couple’s two dogs Gordo and Butter on Thursday, and he still kept the wedding ring on

Schwartz first confirmed the news in a heartbreaking post shared to Instagram on Tuesday, where he suggested it was Maloney’s decision to separate after 12 years as a couple.

‘Katie & I are separating. I’m not quite ready to use the “D” word because it’s too painful. Yes my heartaches but I’ll be ok. Not looking to evoke any sympathy here. I’m not the victim. Not gonna write too sad a song,’ penned the restaurateur.

‘Fully respect Katie’s decision and we’ve had healthy, productive conversations about it. It would be far sadder if she decided to stay with me whilst not happy.’

Moments later, Maloney shared her own statement to Instagram announcing that she and Schwartz were ‘ending our marriage’ and that the ‘ending is not met with resentment or animosity, no sides to choose.’

The couple, who have appeared on Vanderpump Rules as a couple since the show’s inception in 2013. They’d originally wed in 2016 but later found out the wedding was illegitimate due to misfiled paperwork, so they formally married three years later.

While there might not be any animosity between the couple, that doesn’t mean everything was working just fine in their relationship. 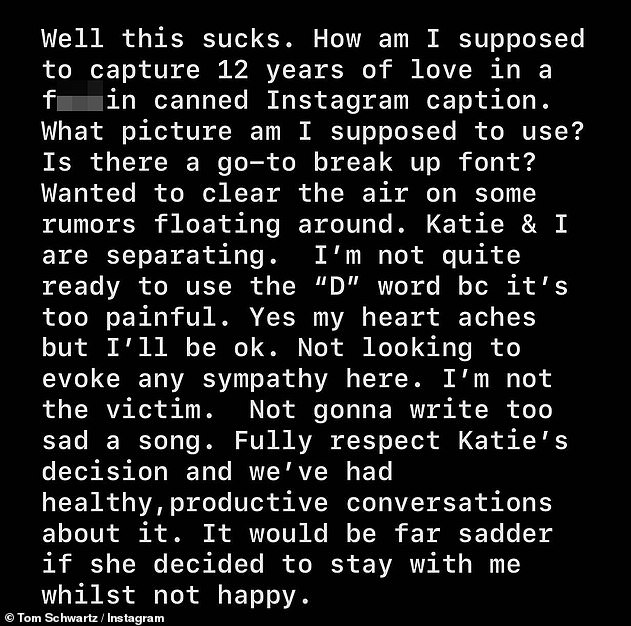 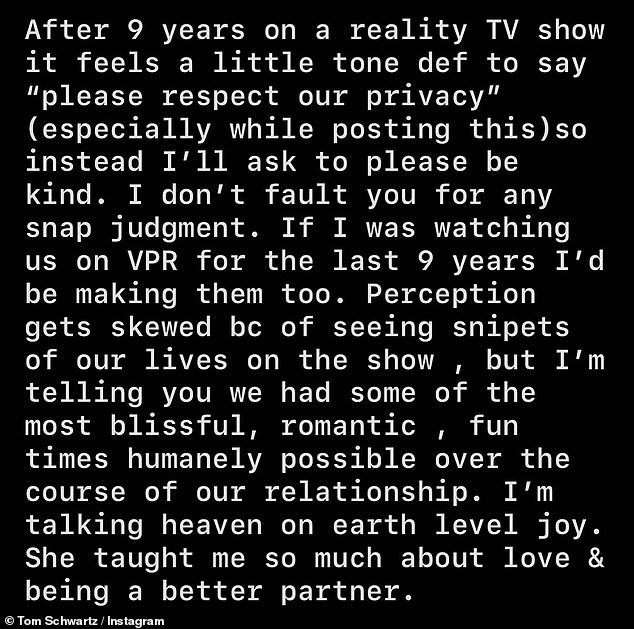 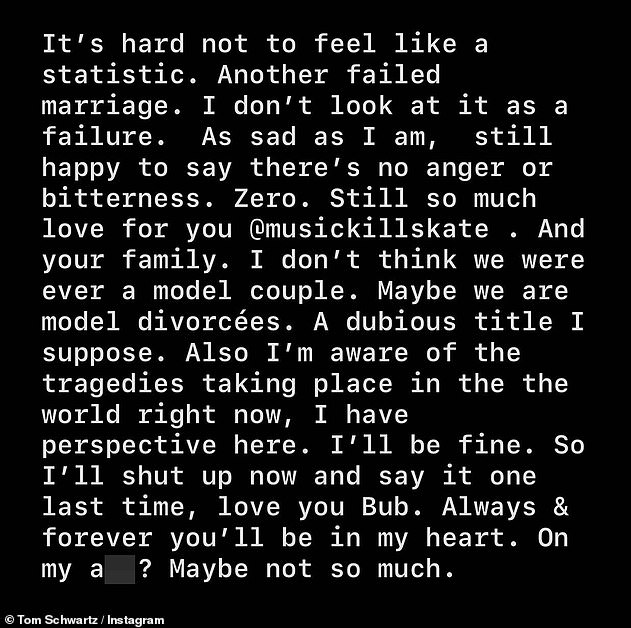 Painful post: Schwartz, 39, first confirmed the news in a heartbreaking post shared to Instagram on Tuesday, where he suggested it was Maloney’s decision to ‘separate’ after 12 years as a couple 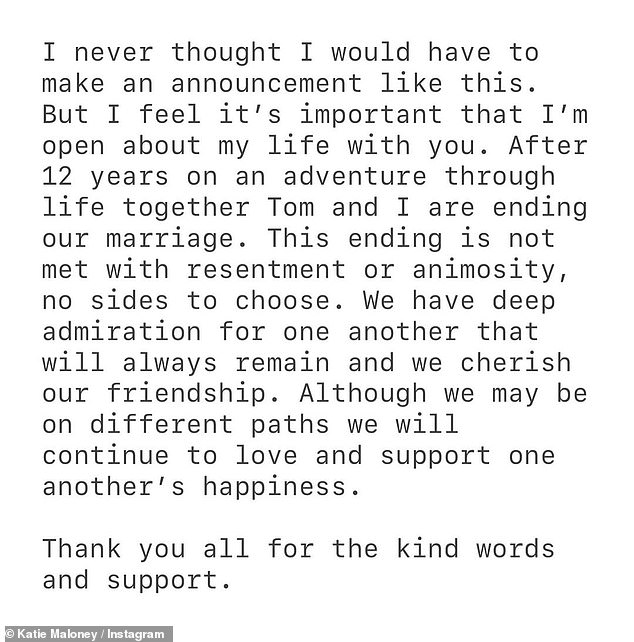 Difficult decisions: Katie, 35, shared in her own post: ‘I never thought I would have to make an announcement like this. But I feel it’s important that I’m open about my life with you

Insiders told PEOPLE magazine their split was partially due to ‘intimacy issues’ as they were years into a sexless marriage and living like ‘roommates’ in the $1.9 million Valley Village home they purchased together in 2019.

Insiders revealed their relationship had been lacking ‘intimacy’ and didn’t feel right ‘for quite a while’ before the decision was made to end things.

Ultimately, Tom was looking for ‘more flexibility with his life’ while Katie had her sights set on ‘more of a traditional marriage.’

Their sex life, or lack thereof, was often discussed on Vanderpump Rules as Katie and Tom rarely admitted to being intimate with each other.

During one season eight episode in 2020 after a prank backfired where Jax Taylor and Randall Emmett orchestrated Tom Sandoval’s fake arrest for vandalism, Tom branded Katie ‘gross’ when she overreacted that the incident wasn’t even funny. 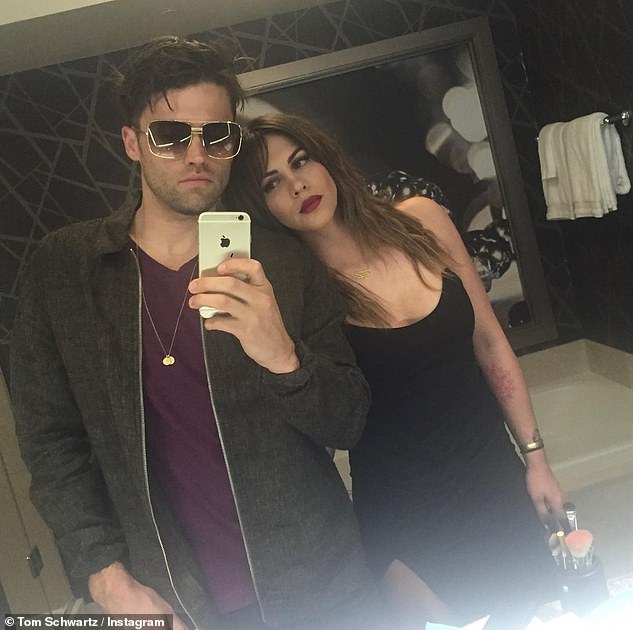 Intimacy issues? Insiders told PEOPLE magazine their split was partially due to ‘intimacy issues’ as they were years into a sexless marriage 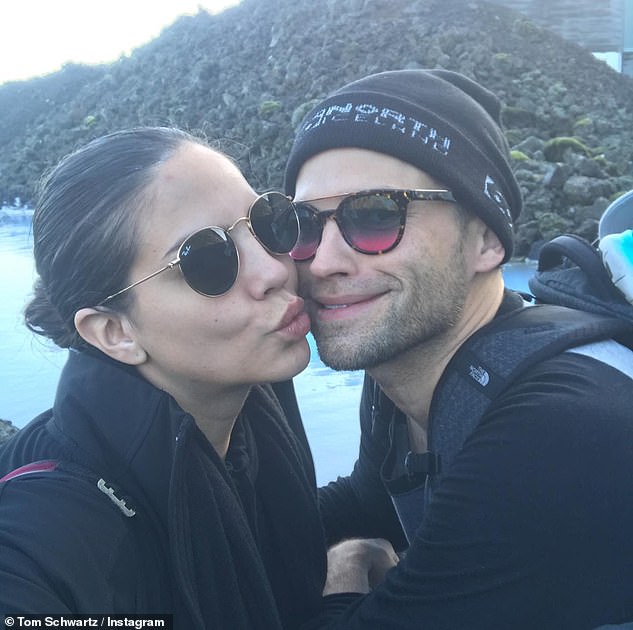 Reality television blow ups:  Their sex life, or lack thereof, was often discussed on Vanderpump Rules as Katie and Tom rarely admitted to being intimate with each other

Schwartz screamed at her in front of the cast and cameras: ‘This is why I don’t have sex with her. You’re ruining a great moment. We’re laughing.’

He added: ‘That’s another two months we’re not having sex.’

During a trip to Puerto Vallarta, Mexico in 2019, Tom called Katie a ‘wet blanket’ after she spent hours rage-texting him on the airplane when he accepted a seat on first class while she sat in coach before they brought another one of their bitter feuds to the balcony of their hotel for all of their friends to hear.

Tom accused his wife of ‘putting a dampener on like 70 percent of the vacations we’ve been on together.’

He then accused his wife of having ‘the IQ of a 14-year-old’ and being ‘selfish’ for fighting so soon, and she insisted: ‘You have don’t have the wherewithal to say, “I’ve been a s***ty husband.”

Tom tried to make it up to Katie later on in the trip and brought all of her favorite snacks to their room in a bid to win her heart and possibly get intimate, but he later revealed they didn’t have sex that night.

‘We had every intention on doing so, but we were so tired and hungover from three days of just nonstop vacay mode, drinking, eating, minimal sleep,’ he said on the  Vanderpump Rules After Show. ‘We just both passed out. But it was in a beautiful embrace. We made out a little.’ 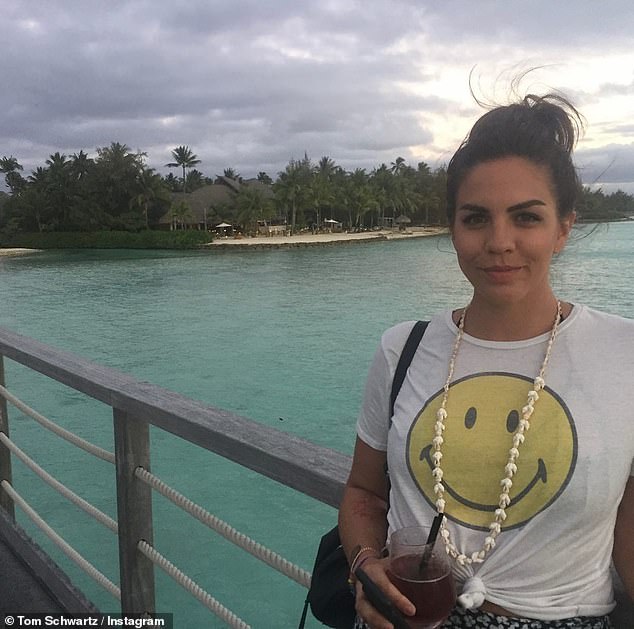 Hurtful comments: While on vacation in Mexico, Schwartz screamed at Maloney in front of the cast and cameras: ‘This is why I don’t have sex with her. You’re ruining a great moment.’ 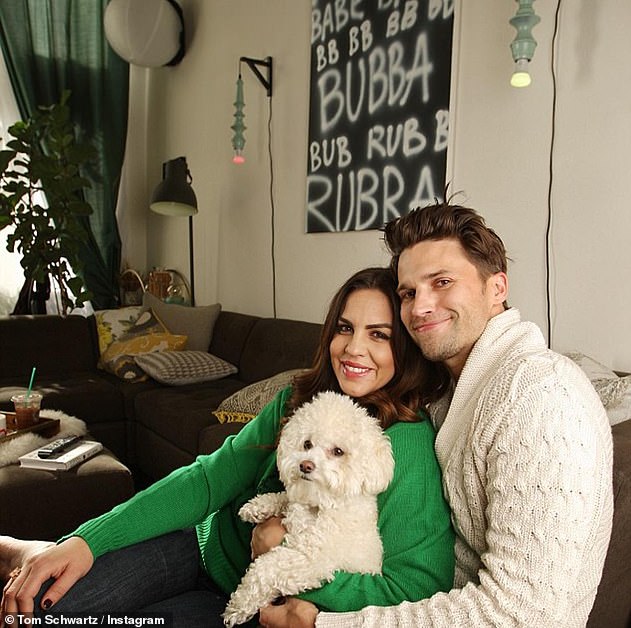 Tried for a family: The couple admitted to trying to expand their family in season 9 of Vanderpump Rules, which premiered in 2021, but by 2022 Schwartz confirmed they’d stopped trying

While Tom and Katie’s friends seemed to be having no issues conceiving children — Stassi and Beau Clark had baby Hartford, Lala Kent gave birth to daughter Ocean with now ex-fiance Randall Emmett, and Scheana Shay had daughter Summer with fiance Brock Davies — their fertility journey didn’t seem to be as easy.

‘As far as the timeline, I’m still noncommittal, but I’m on the record — it’s official, we do want to have kids, and I love kids,’ Tom told PEOPLE in May.

When an Instagram fan asked if she had FOMO (fear of missing out) about her friends’ growing families, she responded: ‘Zero fomo. I’m so happy for my friends and really enjoying being along for their journey. It will happen for us when it’s right. Sometimes it just takes time and doesn’t always happen the first try.’

In season nine, which premiered in late 2021, Schwartz revealed that he and Maloney were actively trying to expand their family and have children during the pandemic.

‘During quarantine, Katie and I decided to really put a concerted effort into trying to make a baby,’ he revealed. ‘There was a two-month window in which we were really working on it.’

But by January 2022, Maloney confirmed to Page Six that they were no longer ‘actively trying’ to conceive.