A bride who gave birth when she should have been walking down the aisle said her unexpected little guest was the perfect wedding gift.

Little Rory Cheetham decided to gatecrash his parents’ big day on May 21 by arriving four weeks early, throwing their nuptials into chaos.

Hairdresser Rebecca Macmillan went into labour only a few hours before she was due to marry partner Nick Cheetham in front of 200 guests at Gartmore Village Hall in Stirlingshire.

Rebecca, 32, who drove herself to the hospital, said: ‘Every bride wants a memorable wedding day and Rory has made ours more memorable than most.

Rebecca Macmillan gave birth to her son Rory, pictured, only a few hours before she was due to marry partner Nick Cheetham in front of 200 guests at Gartmore Village Hall in Stirlingshire on May 21 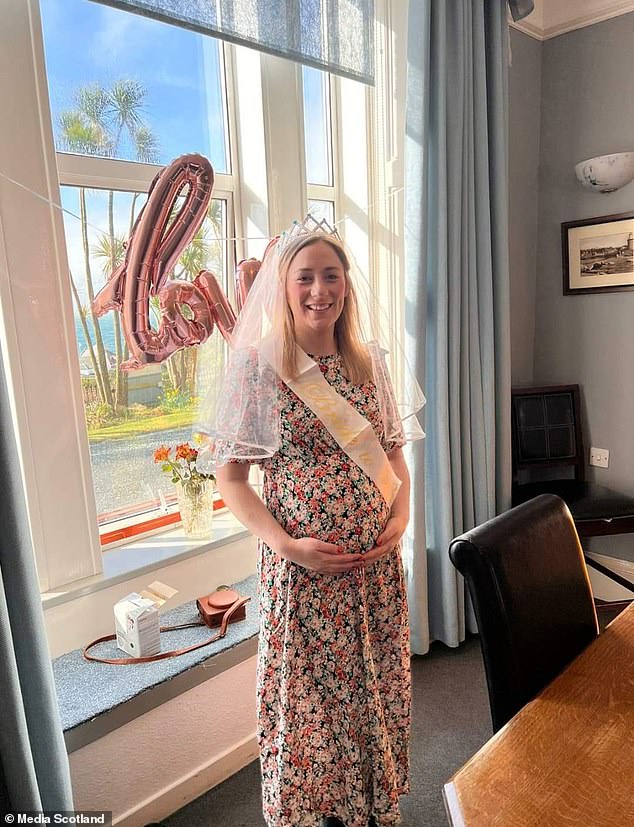 The expectant mother, pictured at her hen do, admitted she had joked about giving birth on her wedding day, but never thought it would actually happen

‘We ended up not getting married but we have the most beautiful baby boy instead.’

The former wedding planner and skills and competency manager Nick, 36, got engaged in July last year, five years after they first met online.

The couple, who live in Stirling, booked their wedding for Saturday, May 21, in the heart of the Trossachs National Park and set to organise everything from catering to a videographer.

When she found out she was pregnant and the baby was due on June 20, the couple decided to go ahead with the big day.

Rebecca said: ‘We were going to postpone the wedding but, after the pandemic, we realised life is too short and decided, “Let’s just go for it”.

‘When I was a wedding planner, I didn’t ever work with a pregnant bride. I think most people aren’t mad enough to get married while heavily pregnant. 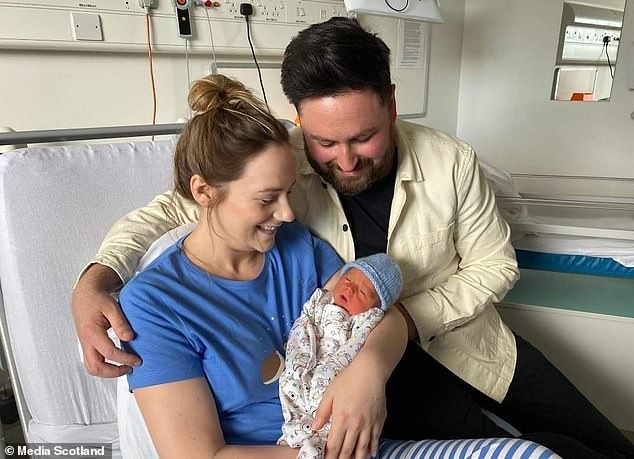 While they didn’t get married, Rebecca said Rory was the best gift the couple could have ever received 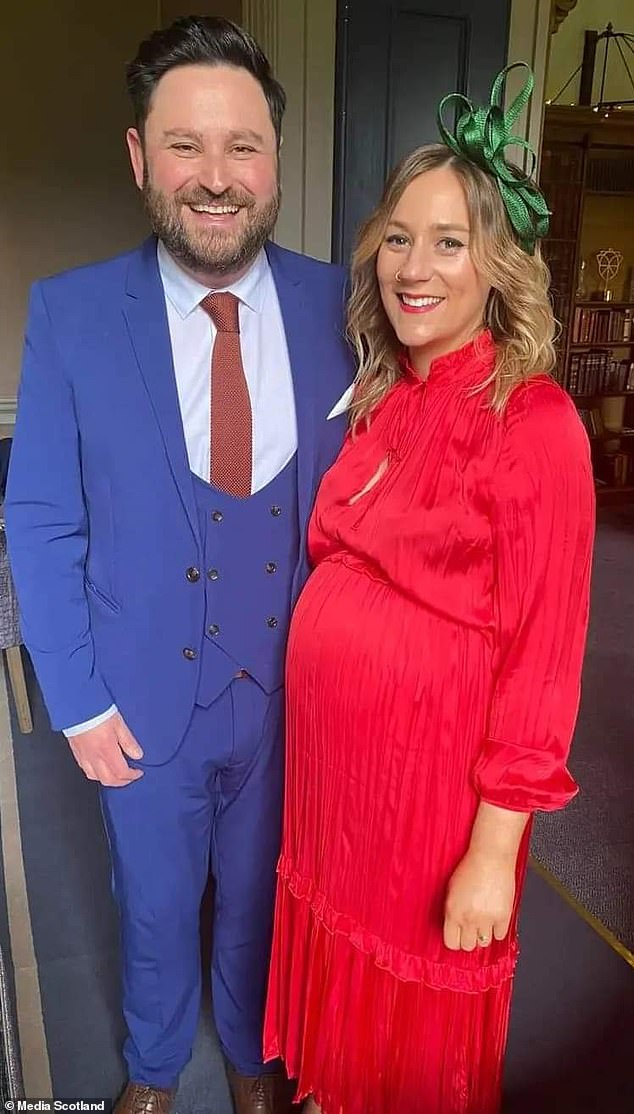 The couple were excited to welcome their baby boy, who was due to be born a month after their wedding

‘I’d have the conversation with my hairdressing clients too and I’d always say, “As long as I make it up the aisle”.

‘We joked about our baby arriving on our wedding day – never actually believing it would happen.’

Rebecca, who was set to have eight bridesmaids, said the pregnancy altered some of their wedding plans.

She added: ‘I had to buy a new wedding dress – four sizes too big for me – as my original dress was tiny.

My hen weekend plans had to be designed around my pregnancy but we still had a wonderful time in Portpatrick.

But other than that, I was a bit naïve and believed it would all be fine and I’d be rocking out on the wedding dancefloor. 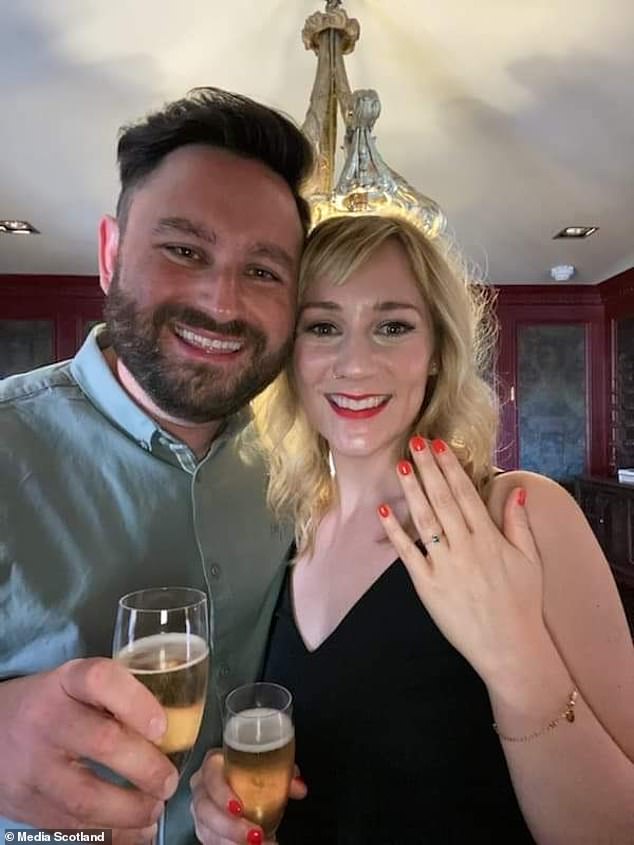 The pair got engaged in July 2021, and set to organise their wedding. When they found out Rebecca was pregnant, they stuck to their chosen date

She admitted she started to feel nervous their baby may arrive early the day before her wedding as she and Nick were joined by family to decorate the hall where their reception was being held.

She said: ‘I woke on the Friday feeling good. In the afternoon we set up the hall. Our mums went to work making table arrangements, the bar was set up and we set all our chairs out ready for the ceremony.

‘Things were looking great and there was a lovely buzz but I didn’t feel right. By the time the evening came, I was paranoid, so called the midwife.

‘She assessed me and said my symptoms were OK and I should be fine. We had a pre-wedding dinner with our parents, then I went to bed for an early night at a B&B whilst Nick stayed at a nearby hotel.’

Rebecca woke in the early hours of the morning as her waters broke and told how she called her husband-to-be and then drove herself to Forth Valley Hospital in Larbert.

She laughed: ‘As I was leaving, I knocked on my bridesmaids’ door to tell them I was heading to hospital. I had to drive myself because I was the only one who hadn’t had a drink at dinner.’ 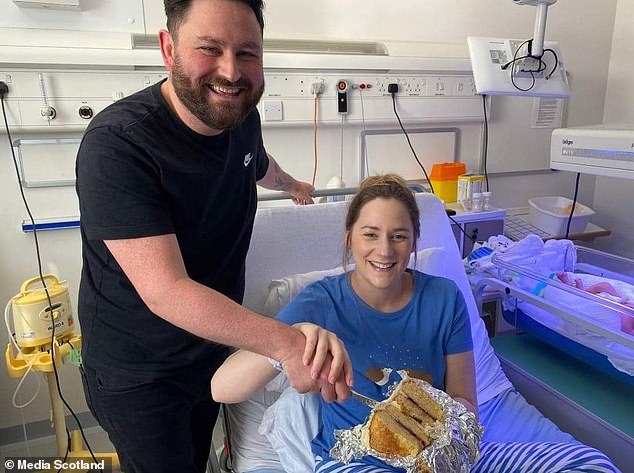 Instead of getting married, the couple enjoyed some of their wedding cake in the maternity ward next to Rory, right

As Nick called the wedding suppliers to cancel their big day, their families did their best to contact the guests.

Rebecca said: ‘Our family and friends who were local gathered at the venue to start dismantling the wedding – collecting my dress, decorations, jewellery, the cake, putting it all back in storage for the next big day.

‘Everyone was excited for us, which was lovely. Some people thought it was a wind-up.’

But medics at the hospital noticed Rebecca’s unborn baby’s heartbeat was starting to dip worryingly every time she had a contraction and the decision was made to rush her to theatre for an emergency Caesarean section. Rory Ian William Cheetham was born at 11.40am, weighing 5lb 3oz.

Rebecca said: ‘All the hospital staff have been so kind and absolutely amazing. The nurses and midwives knew our story and told us how sorry they were about the wedding.’

Nick said: ‘When I heard the chap on my hotel door on our wedding day morning, at first I thought I’d slept in for the wedding. When I looked at the time and saw it was 3.30am, I knew straight away what it was.

‘We feel so very lucky to have Rory – and our amazing family and friends who got stuck in dismantling our wedding set-up and contacting our guests.’

Postponing their wedding just hours before it was due to go ahead may have cost the couple £12,000 but they hope to go ahead with their big day some time in the future.

Rebecca, who was joined by Nick and her midwives for an unofficial wedding cake cutting ceremony in hospital, said: ‘We paid for the venue, catering, band, photographer, videographer, celebrant, cake, kilt hire, bar, flowers, hair, make-up and a piper.

‘Our caterers, Alex Graham Bakers of Kilsyth, have been in touch and offered to move the date for a small fee – a cuddle from Rory.

‘The piper and photographer have also said they will transfer our booking. Hopefully some others will do the same. We may have lost most of the money but the joy of having our son is priceless.’