A couple who put off their wedding for eleven years tied the knot three days before the bride tragically died of cancer.

Ben and Jen Cooper got engaged in 2010 but kept putting back their wedding day due to work, family losses and having three children together.

The couple finally managed to tied the knot last month in the Severn Hospice in Telford, Shropshire, just days before Jen passed away.

Last year the mother-of-five, 43, had celebrated five years of being cancer free after following treatment for breast cancer.

Months later, just before lockdown, the maths teacher was diagnosed with cancer again after she discovered a new lump under her armpit.

Jen began a new battle with the disease but died peacefully on November 20 with husband Ben, 34, by her side, after wishing each other one last ‘good night’.

Ben and Jen Cooper got engaged in 2010 but kept putting back their wedding day due to work, family losses and having three children together 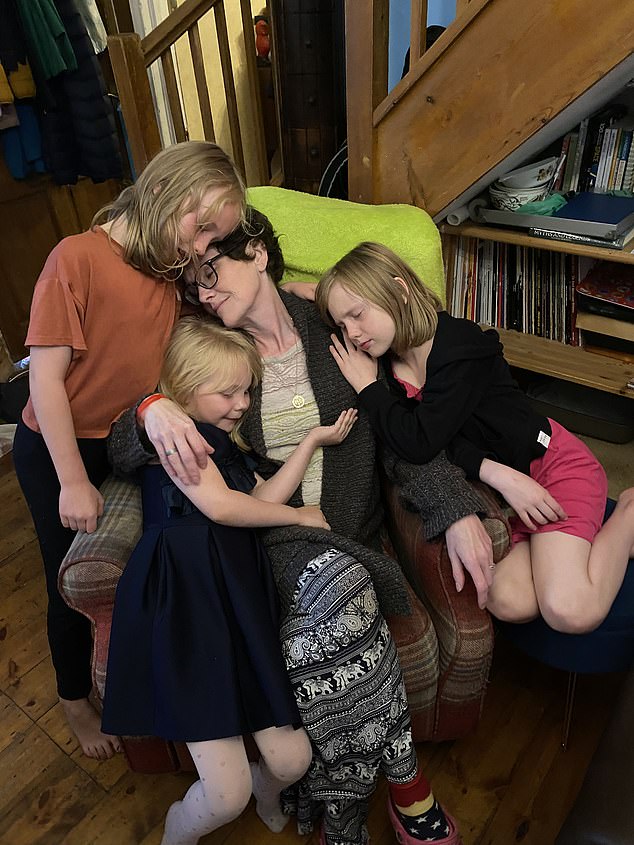 Last year the mother-of-five (pictured with three of her children), 43, had celebrated five years of being cancer free after following treatment for breast cancer 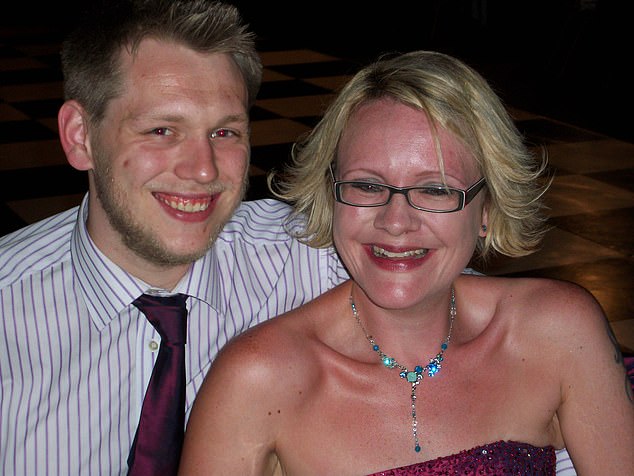 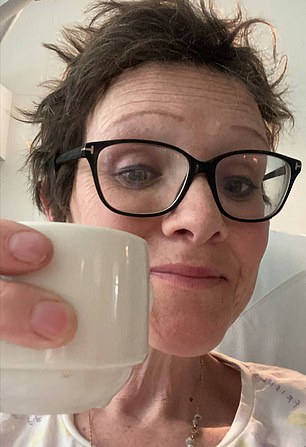 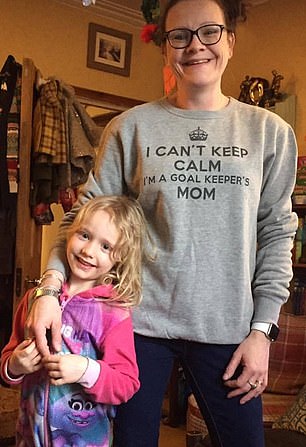 The couple brought their wedding day, which was planned for November 27, forward after Jen’s health deteriorated so the beloved mum could have her special day.

Speaking today Ben, from Newport, Shropshire, said: ‘There was just us, Jen’s mom and two witnesses.

‘We played Bon Jovi for Jen, got her in her dress, and had some bubbly.

‘It was perfect. The nurses hung Jen’s dress up in her room so she could look at it when she was in bed.

‘The kids were so excited about the wedding I was worried about coming home and telling them we’d got married and that they hadn’t been able to be there, but they were just so happy for us.

‘One happy thing to come from the arrangements for the original wedding is that the 27th is going to be turned into a mega birthday party for my girls, who all have their birthdays before Xmas.’

Jen had two children with her ex-husband and after meeting Ben went on to have three more children.

Ben said: ‘The community has also very kindly donated to a Just Giving page for the wedding costs and they have kept things open for a fund to help me and the kids stay afloat.

‘I had no idea how I would get five kids through Christmas and three birthdays when my salary will barely cover the bills on my own, the donations will help me make sure that their first birthday/Christmas without mum is as happy as can be.

‘My one daughter even insisted on wearing her wedding dress to school for children in need of a non-uniform day. 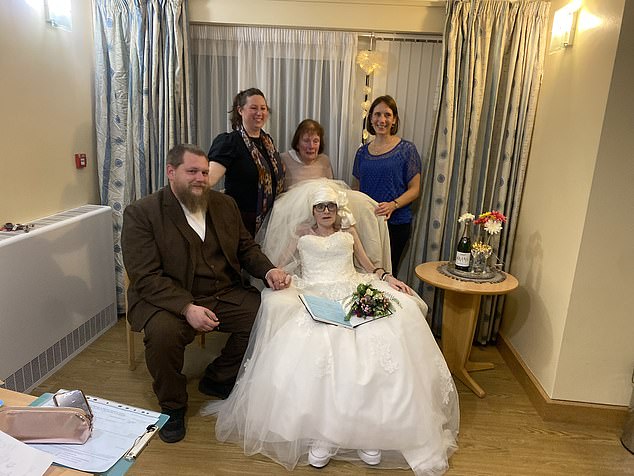 The couple finally managed to tied the knot last month in the Severn Hospice in Telford, Shropshire, just days before Jen passed away 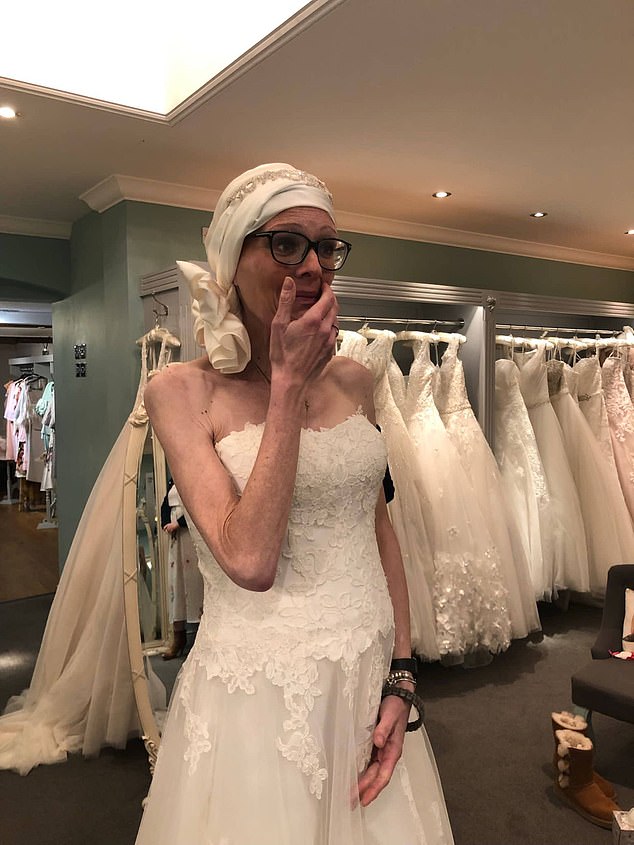 Just before lockdown, the maths teacher (left and right) was diagnosed with cancer again after she discovered a new lump under her armpit. 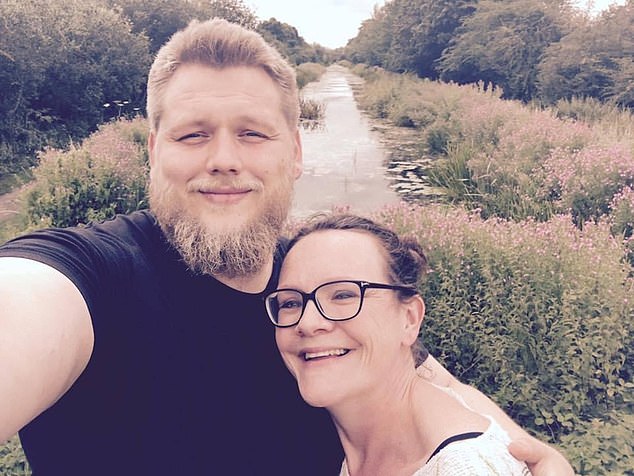 Jen began a new battle with the disease but died peacefully on November 20 with husband Ben, 34, by her side, after wishing each other one last ‘good night’

‘Her last moments were with me holding her hand. I told her that I loved her and the kids loved her.

‘The movie that had been playing in the background had just finished and I sad to the nurse ‘I can’t believe the last film she’ll ever watch is Big Momma’s House’, a stupid joke to break the tension and the nurse and I laughed.

‘Then I noticed that her chest wasn’t moving and asked the nurse to check and she’d gone.

‘So either the last thing she heard was ‘The kids love you’ or another stupid comment from me. I think Jen would have been happy with either.

‘I stayed with her for a while, holding her hand and talking to her while my friend came to pick me up.

‘Then I gave her one last kiss and said ‘Good night Beach’ (her nickname from me), and I went home to the kids.’

Ben shared a photo of the couple after their nuptials on Twitter two days Jen passed away,, writing: ‘I finally married the love of my life on Wednesday. Not the day we had planned but amazing.

‘I’m heartbroken that this marriage will be counted in days not years. Don’t put things off, tell the people you love that you love them now.’

The post has now collected over 99,800 likes, 4,500 retweets and 2,000 likes from users who shared their congratulations.

Facts and figures on breast cancer

A million and a half women have missed out on breast cancer screening as a result of the pandemic.

Around 12,000 of them are now likely to have undetected breast cancer and could die as a result, according to analysis by Breast Cancer Now.

The charity found that a backlog of 1,480,000 women needing mammograms had built up since national breast screening ground to a halt in March last year.

Chief executive Baroness Delyth Morgan answers some key questions on the disease below.

‘While secondary breast cancer can sometimes be controlled for some time using different combinations of treatments, it cannot be cured – and almost all of the 11,500 women that die as a result of breast cancer each year in the UK will have seen their cancer spread.’

‘Triple negative is a form of breast cancer that lacks the three molecules that drive the other sub-types of the disease: the oestrogen receptor (ER), progesterone receptor (PR), and human epidermal growth factor receptor 2 (HER2).

‘Triple negative breast cancers therefore cannot be treated with drugs used to target these receptors in other forms of the disease, with triple negative patients being limited primarily to surgery, radiotherapy and chemotherapy.

‘Around 15% of all breast cancers are triple negative, with around 7,500 women in the UK being diagnosed each year.

‘They are more likely to spread to another part of the body where they become incurable, and unfortunately still have no targeted therapies.

‘While cornerstone treatments, chemotherapy and radiotherapy can be extremely gruelling for patients, so we desperately need to find new, kinder options for those diagnosed with triple negative breast cancer.’

‘There are many different forms of breast cancer, depending on their genetic make-up and the type of cancer cell.

‘The outlook for someone’s cancer can depend on a number of factors including the size of the tumour, how early the disease was diagnosed, how aggressive the tumour is and whether it has already spread, and whether it is a less treatable form with fewer options available to patients.’