ASHLEY, N.D. – James Schumacher was fishing at Lake Hoskins on Saturday, Aug. 27, with his good friend Todd Scherer — an old friend from Aberdeen, South Dakota. Little did they know that they were in the right place at the right time for the luckiest fishing story of both men’s lives.

Last Saturday, Aug. 27, was the final stop of Schumacher’s trip. He, Scherer and another buddy were having a great day on Lake Hoskins just west of Ashley. The original plan was to fish until 3 p.m., but they were catching some nice perch and walleye so they continued for another hour.

Once they got back to shore, they cleaned the fish and started to load up. Scherer rounded a corner and noticed that Schumacher had collapsed and was laying on the ground near a picnic shelter.

“I thought maybe he tripped, you know, and hit his head,” Scherer said. “That’s kind of what I was thinking. When your buddy’s laying face down in the dirt, you kind of think ‘uh oh’ … So I just ran over that quick and hollered at him and shook him and there was no response. I rolled him over, and by that time our other buddy got there — his lips were blue.”

He and their other friend tried their best to get Schumacher to breathe, once the two men noticed a wagon coming through the park, heralding the arrival of a nearby wedding party.

Once the ceremony was over the party took a pontoon from the cabin and then hopped on a wagon that was intended to head to town.

The men shouted for help, asking if anyone knew CPR.

That’s when one of the members of the wedding party intervened. Travis Wolters of Jamestown came to the rescue. Wolters, an 11-year U.S. Army veteran, had taken extensive CPR courses during his Army training. 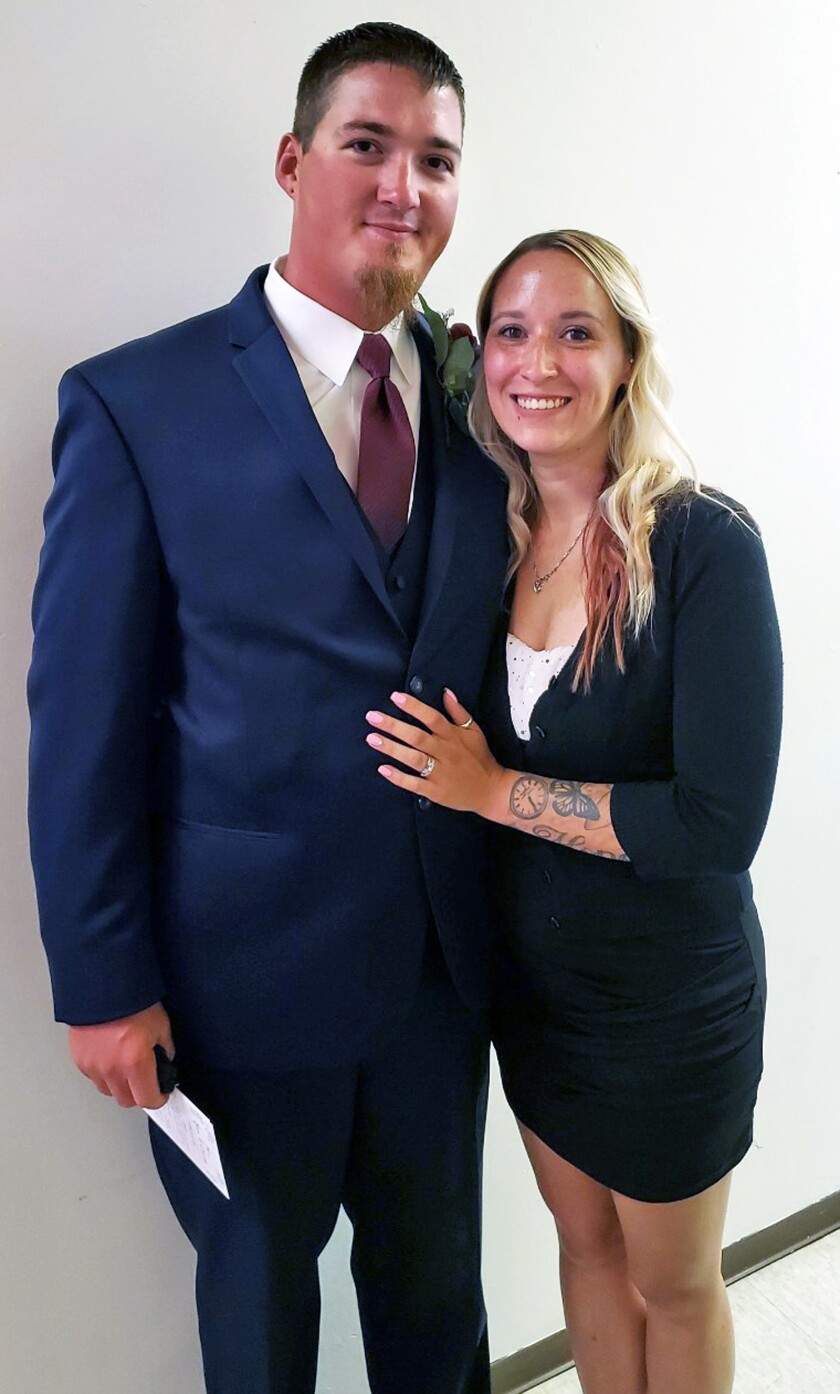 Travis Wolters poses with his wife, Megan. Wolters, who is from Jamestown, saved James Schumacher with CPR. Wolters said Schumacher likely had a heart attack.

“When I got there, I noticed that he was unresponsive and clearly wasn’t breathing on his own,” Wolters said. “So I checked his pulse, which was really low and irregular. At that point, I began to give him CPR, chest compressions and rescue breaths. While I was giving him CPR, I noticed that he had a long scar on his sternum indicating he had open heart surgery at one point. So I kind of just kind of pieced everything together, that it was more than likely a heart attack.”

After 15 minutes of chest compressions, Schumacher started to breathe on his own but was still unconscious.

“One of the biggest things that I kind of take away from it is CPR or first aid isn’t really something that a lot of people have knowledge of in the civilian world,” Wolters said. “Even the individuals that do take it, it’s a very small percentage of those people that take that training and actually use it in a real life situation.

“I’ve taken that course multiple times, like I said, doing that Combat Lifesaver Course in the Army – you do all the training and you always kind of have that thought in the back of your head,” he said “… I’ve trained for it and practiced it on a dummy how many times, but how effective would it really be in a real life situation? So it’s kind of cool to be able to see all that stuff work in a real-life scenario and have the best ending possible come out of it.”

Cori Randall, a nurse practitioner in Mcintosh County, also participated in the life-saving effort. An ambulance was called, and then Flight for Life was called to take Schumacher to Bismarck.

Deputy Victor Fischer, who was an usher at the wedding, stayed with Schumacher until the plane arrived.

Scherer said a lot of things fell into place that day.

“Like I said, 20 minutes earlier, we’d have been out in the boat,” Scherer said. “We didn’t even have cellphone service there. So you know what would have happened? Another half an hour later, from here, he would have been heading back to Florida. He would have been 20 minutes down the road. What would happen then? That’s just one of them things … I mean, if it was gonna happen, it couldn’t have been a better time. And then you know, the wedding party. There were two people that knew what they were doing.

“It’s just kind of a luck of the draw that we just happen to be passing by that point,” Wolters said.